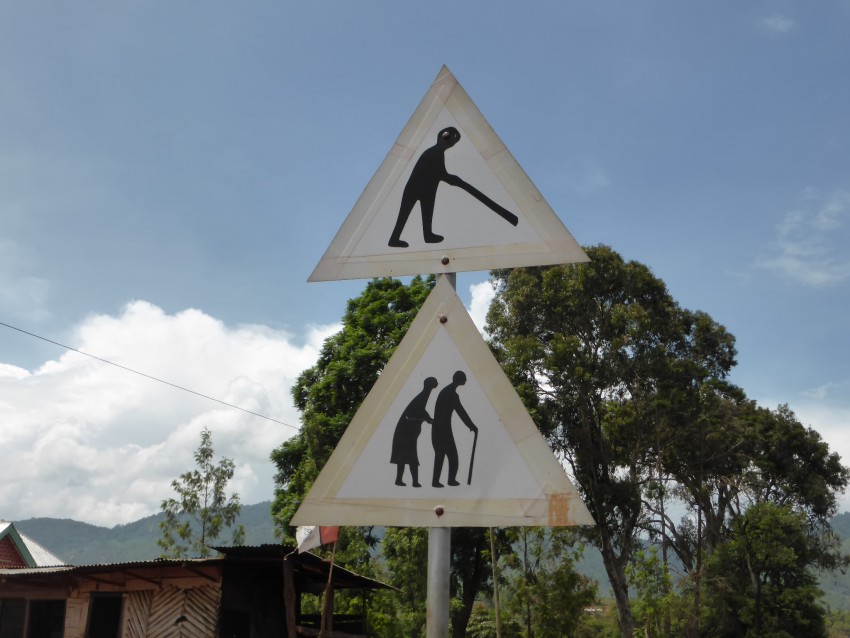 I like that they have "old-people-walking" and "blind-people" caution signs. The elderly are quite respected in Tanzania.

If you Canadians are ever wondering what happens to the clothes that do not sell in Value Village, I have found the end of the source!

They seem to end up getting shipped to Tanzania. I have seen a lot of clothes in markets here with Value Village tags still attached to them. So, Canada is clearly sending those clothes.

It is strange to see someone in a Tanzanian city wearing a Vancouver Canucks t-shirt. It really made me wonder how that has happened.

Value Village is how… It makes me appreciate them more…

Grace was a handful this morning.

She was very provocative.  I liked the idea, but I was out of condoms and that meant that nothing was happening.  She told me that I should go out and buy more.

Yea, right, I am going to leave a local woman, who I met in a bar, in my room alone with all of my most important road possessions while I go out and buy condoms.

At 14:00, I met with my friend Geoffry and we went to the bus station to figure out how to get from Karatu to Arusha.  Arusha is the last city I want to visit in Tanzania, but I’m really actually trying to go west out of the country. From Karatu, the only way to get west of the country by bus, is if I pay the extortionate $100 Serengeti and Ngorongoro park fees to cross the land.

That just was not going to work.

So, I figured the only way I am going to pull this off is if I go two hours east from Karatu to Arusha and catch the bus south around the parks.  It will be about twelve hours of bus rather than six, but it will save me $100.

I have time.  What I do not have is money.  So, I have to resource my life assets.

We got into a mini-van that was only supposed to allow eight people inside.  It was more expensive than the dola-dola to take from Karatu to Arusha at $3.50 rather than $2.  It began pouring rain as we were in the bus station.  Then, as we were waiting, they decided to put two more people in the mini-van with us.  We had paid more to ride in comfort, but that was being taken away from us.

I was in the right corner of the back seat.  Geoffry was beside me and a rather large local woman was on the left side.  The extra person was also huge, and it would have been a little crowded in the back seat with just the man and the woman, yet, Geoffry and I were also using the seat.

I was squished right against the wall and my right ass-cheek was off the seat and on a plastic railing that was now my seat.  Geoffry complained a lot, but it was to no avail.  It just made us sound like spoiled rich asshole westerners.  It was a terrible two hour ride where I could only feel half of my ass because the other half was numb all the way down to my foot. Reminder, this was supposed to be a comfortable ride…

I found a room across from the Arusha bus station at the 7-11 Hotel.  It cost me $12.50 for a night because I talked them into letting me write down that I was Tanzanian.  It made the staff laugh when I was trying to convince them that I was local to save $2.50.

At about 22:00 the hotel went dark, and when I looked out the window, the whole city was dark.  After an hour, it was still dark so I went into reception where they had lights working from a generator.  I asked the man what had happened.  He said, “Whole city blackout!”  We were standing at the front door of the hotel.  He told me, “If you are going out, be very very cautious.”

“Ah, yea, there is no way this foreigner is going out at 23:00 into an entirely dark African city.  If I did manage to get back, it would not be with much…”