My cottage at Amasiko Eco-Farm. So great!

I woke up in a wonderful cottage clinging to the side of a hill with a terrace overlooking a beautiful lake with mountains behind the water.  It is gorgeous here on Lake Bunyoni.  Amasiko Eco-Farm is just that.  It also has cottages for visitors.  It is also a green-school for primary students.  Wilfred is a busy man.

It turns out that I am in a village called Hamukaaka!

I found this on a piece of paper in my little cottage: “Toilets in Amasiko are ecosan toilets.  The toilet pots have two holes; one small in front where using is collected and one bigger hold where feces pass.  Urine runs into a container and it used as nitrogen fertilizer in our field crops.  Feces are collected, composted and dug into the soil to grow fodder crops for our animals.” Awesome! 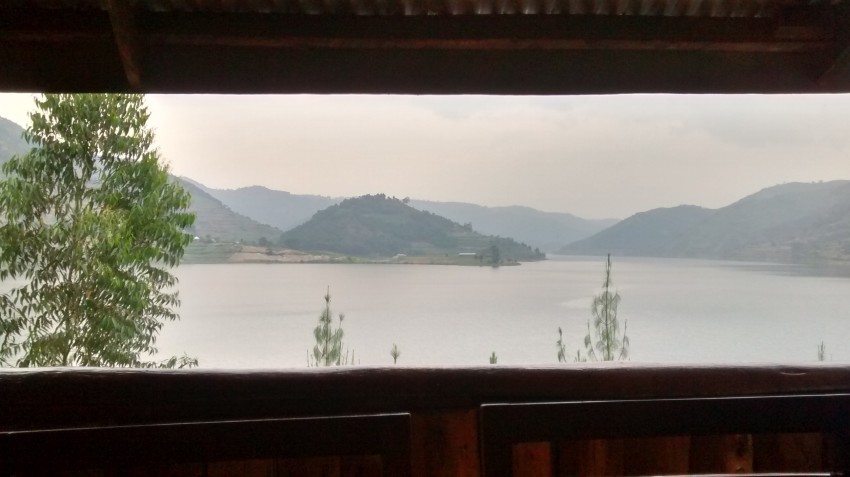 The view from the kitchen of Wilfred’s place/Amasiko Eco-Farm.

Breakfast was at 08:30 where Maria, the Russian volunteer, told us about life in her country.  She said that right now with sanctions, Russia is becoming a very difficult to love in.  She said that there is no medicine in Russia if people get sick, and Russia forbids the import of medication.  Foreigners are forbidden to adopt Russian kids, so she says that children are dying. Then, the Russians say that it is the fault of the United States.

My Russian friend says her country is unwilling to import food saying, “We can be self sufficient,” and “People are not patriotic if you miss foreign cheese. Only bad people miss such things.” According to her statistics, 50% of Russian exports used to go to Europe so it really hurts to be inside of Russia right now, with nothing coming in and nothing going out.  That is pretty terrible to hear…

The Cat Runner
Maria told me a story about when she went with her seven-year-old daughter to Syria in 1999 for some kind of religious retreat.  They were on a huge rock with a church to one side and to the other side were other buildings connected with the church.  People left her and her daughter alone at the retreat, but as soon as they seemed to need something, people there would readily help.  Maria said that her daughter stood up and a man came to her to ask what she wanted.  Her daughter said, “Cat.”  She said that “Cat” was one of the only English words that her daughter knew…  A few minutes later the man arrived with a cat that he handed to the daughter.  When the cat would get away, as all cats like to, the daughter would stand up again and say, “Cat.”  The man then ran off and came back a couple of minutes later with another cat that he handed to the daughter.  Maria said there were two cats that were alternated through the day.  She said, “I think all man did for day was catch cats for daughter.”

I spent the morning and the afternoon building the walls for a shower to be constructed outside next to the outhouse.  I was even given a local helper in his 40s to assist me.  I was excited to work with my hands again for the first time in a long time. But holy shit, I worked my ass off today.

We had to haul many of pieces of heavy lumber up a hill, and then we had to hand saw all of the pieces to build a wall.  It was a crazy amount of hard work and my body is not used to labor.  I use my brain all of the time, mentally preparing and creating for several hours a day, to the point where I am mentally exhausted at least four nights a week. 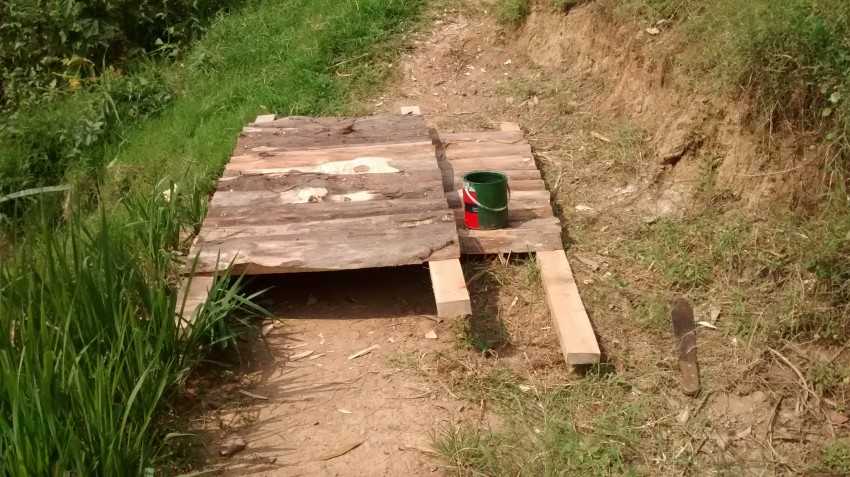 Two of the shower walls.

It is possible that I work my brain harder than most people I encounter… but I really have not participated in physical hard work for a long time.  I push my body all of the time doing such things on the road, wondering how others my age would endure the same things and situations.

Yesterday, I hauled a 20 kg backpack up and down hills on a road for seven kilometers, which was very exhausting.  But, hauling lumber up a hill, cutting all of that lumber with a hand saw and then hammering walls together with 12cm spikes…well, that wore me out today.  It sure felt great to feel handy and feel like a man, but holy shit…hard work is hard work…

“I push my body all of the time doing such things on the road, wondering how others my age would endure the same things and situations”

…Life is interesting.  One day you are in Rwanda trying to volunteer to spend time with gorillas in the jungle, that night you end up in the back of a truck full of potatoes in Uganda, and the next day you spend most of the sunlight building an outside shower on the side of a lake for a Dutchman… 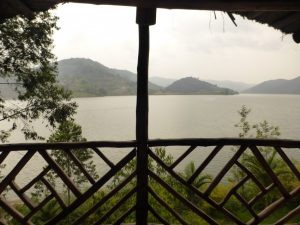 Cottage terrace view on the eco-farm. 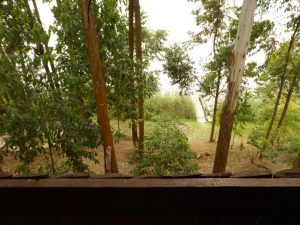 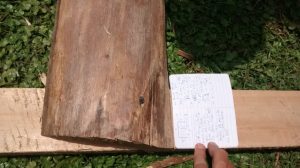 I could not find a ‘square’ at Wilfred’s, so my notebook would do the job. 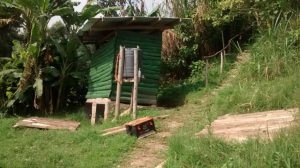 The outhouse, next to where the shower will go. 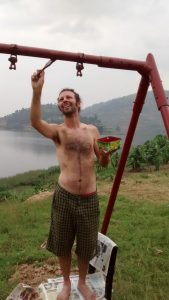 Painting at the school to get it ready for the year to begin in a few days. 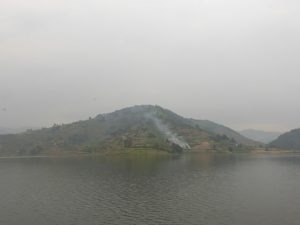 Lake Bunyonyi and the hills contrasting the water.

“‘If it’s the thought that counts, I should probably be in jail.’”
— Sign on the wall in Waskatenau Bar.
[View All]