Fort Portal to Butiaba: Cheats, Near Collisions, and Jerry Can Showers

Fort Portal to Butiaba: Cheats, Near Collisions, and Jerry Can Showers.
Feb 13.

To get from Fort Portal to Butiabam, I got up and found a mini-van leaving Fort Portal and heading north to a town called Hoima.  30,000 shillings ($8.80).  When I asked, they told me it was going to take about three hours to get to Hoima.  One always needs to double that number to mentally prepare for the actual arrival time…

As I was sitting and waiting for the mini-van to fill up, a man came along selling samosas for 200 shillings ($0.06) each.  I asked for one and handed him a 1,000 shilling note.  I began eating the samosa while the vendor man was searching through his pockets for change.  He found a 500 shilling coin and a 200 shilling coin, but had no more.  He handed the change to me.

He was quite capable of finding money when he was being cheated…
It seemed acceptable to him to cheat me out of 100 shillings because he did not have enough change.  I asked him for one more samosa.  He handed it to me and I ate it.  He wanted me to give him 100 shillings for the difference owed, but of course I did not have it.  I shrugged my shoulders at him.  I said, “No change.  You have no change.  We have no change.”

Then, he left to go and find another vender where he got a 100 shilling coin.  He came back to me with it and showed it to me. I handed him the 200 shilling coin he had handed me earlier so that we were even.  He was quite capable of finding money when he was being cheated….

The three hour mini-van ride turned into five.  Our driver with no teeth got us on the dirt road once the mini-van was packed full. As soon as we got just to the outskirts of town, he pulled off to the side of the road to have a pee while we waited.  Thirty minutes later, I heard someone throw up. I looked behind me to see that it was an infant lying in his mother’s arms and he had vomited all over her face.  The trajectory of his vomit had covered her from her chin to her eyes.  I felt bad for her.  She was wiping the vomit off of her face with a blanket because there was nothing else to use. 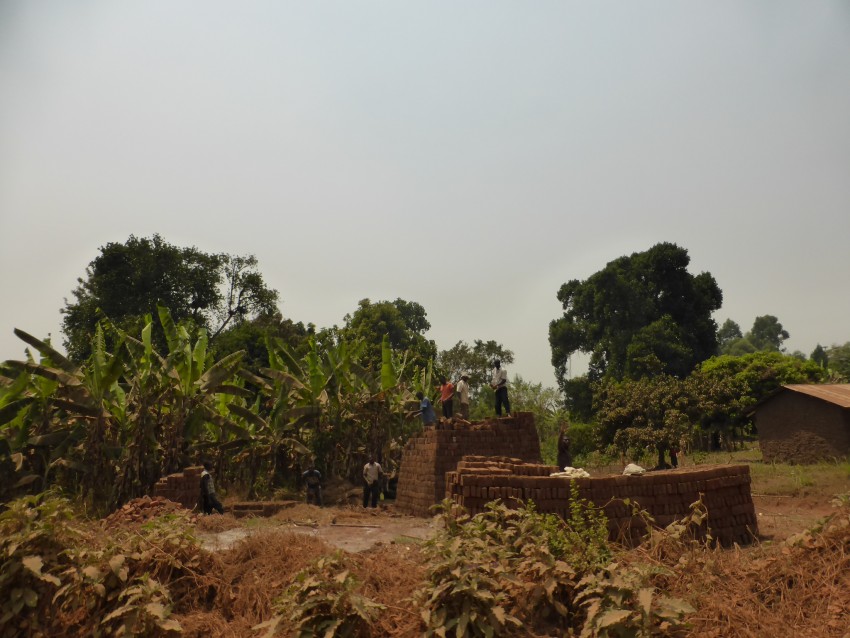 The mini-van stereo was playing classic country music.  It is pretty strange to hear Dolly Parton’s “9 to 5” here.  They also played “Daytime Friends and Nighttime Lovers” by Kenny Rogers and “Desperately” by Don Williams.  I am not sure how someone in Uganda found that music.  So incredibly misplaced…

Suddenly on the drive, our mini-van stopped on the side of the road.  The driver got out and his conductor got out.  As we sat in the van, they removed the back left tire.  When I got out to have a look, there was fluid on the ground underneath of the van and they had the brake-shoes disassembled.  Another mini-van came to pick us up.  Everyone loaded into that van and we were on the road again.  As soon as we arrived in the first town with the new mini-van, we had to stop to put air in one of the tires… 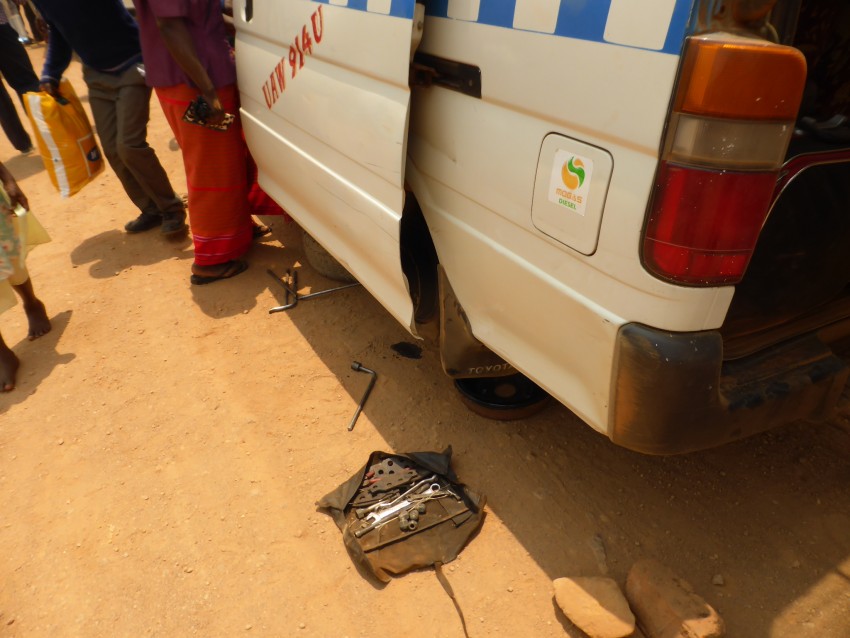 Broken down on the road.

The new mini-van driver was pushing the vehicle as hard as he could.  He was a loud-mouthed man who had something to yell at everyone close by in every town we would pass through.  On a dusty road, he drove really fast.  There was a guy on a motorcycle parked in the middle of a curve in the road and at the bottom of a small hill.  At once, a lorry/semi-truck popped over the hill coming towards us.  The lorry was also travelling very fast.  The motorcycle was in the way and the lorry had no choice, but to either run over the motorcycle and driver or drive into our lane to get past the bike.  The problem was that we were coming the other way and we also needed the lane or else we would have to run over the motorcycle driver ourselves.

I actually heard the words, “Holy shit….” calmly come out of my mouth before I realized I had even said them.  I may be exaggerating the image in my mind, because it was so crazy, but the high-speeding lorry seemed to be partly sideways across the road as he just got past the motorcycle. We hit the ditch at that moment to avoid the head-on collision.  Our driver just kept on moving at his same speed and once the lorry was past we ramped back up on the road and just kept on going.  It was crazy. 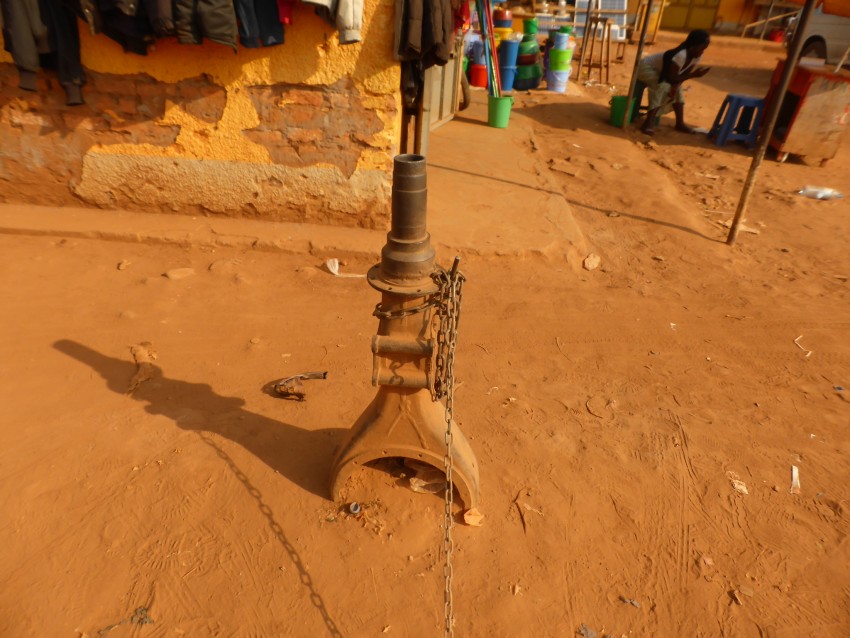 We pulled into Hoima sometime later. I got into a car that would take me further north to a village called Butiaba that is on Lake Albert.  We had to wait and wait in Hoima for the car to fill up.  Even when you have no particular place to go, and no particular time to be there, it is still frustrating to have to wait and wait to get going.  Eventually with eight of us…plus bags, gunny sacks and groceries…we were ready.

I had to share the front bucket seat with the driver.  Really.  I was originally in the back, but a girl got out and a couple wanted to sit together, so I was directed to move into the front of the car. People pack in cars here in Uganda like clowns in a circus.  So, I had a to share a bucket seat with the driver.  It was awkward.  A girl next to me sat partly on the console and partly in the passenger seat with another woman.  The back seat had four people on it.

I made friends with Nicolas, the taxi-driver.  I had no choice.  He was basically sitting on me.  He was having trouble with the brakes on the car.  Fort Portal to Butiaba, completed!

Once we got to Butiaba, I helped him bleed the front brakes because the left front was dragging and it was nearly red-hot.  I told Nicolas that I needed a guesthouse to sleep in for the night.  He said, “We have lodges.  We have them for 7,000 and for 10,000.  The 7,000 is not so good.  The 10,000 is okay.”  I figured the 10,000 ($2.93) would probably do.  A man named Ronny greeted me as we pulled up and took me to show me a room.  I went to move in, but the window was broken and my things would not really be locked inside.  He moved me to another.  The next room, was not much, but it was nearly enough.  I left my bags, locked the room and went out for a beer with Nicolas. 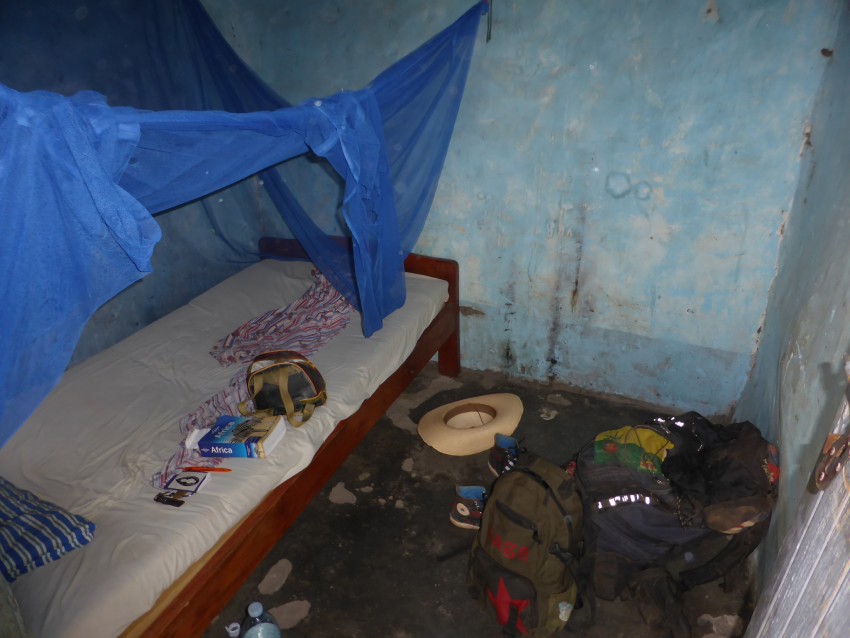 My room at the Amooti Space Lodge and Restaurant.

A bartender woman tried to cheat me out of money when I paid for the beer at a small business with tables and a television.  I caught her on it on the second round and made her pay me back.  She was just trying to skim 500 shilling per round off of me, but, a cheat is a cheat.  It is amazing how you can catch people cheating you, make them pay you back, and they will thank you for your service like they would normally as if there had not been any kind of issue.  It is like the Ugandans have no conscience about it.

Nicolas says that the 20,000 pays for his cost of food and living for the day, so he basically works for nothing.  He said that the members of parliament make 30 million shillings ($8,790) a month here, plus take bribes.  That is crazy.  Because their salary is so high, the government squeezes everything they can to crush the citizens of the country.  The president, Musevini, has been in power for 30 years and is the richest man in the country.  The richest man in the country is the president…  If that does not scream corruption nothing does…

I had originally come north with the intention of visiting Murchison Falls in the national park, but after talking to Nicolas, I have changed my mind.  I do not want to give any more money to go to the government which is where my $50 to enter the park would be going.  So, I will just enjoy Butiaba and Lake Albert tomorrow and then head towards Entebbe.  When Nicolas dropped me off at my lodge, I gave him 10,000 for his lunch for tomorrow.

At the Amooti Spice Lodge and Restaurant, where I am staying, there is electricity in the form of lights in the rooms, but there are not electricity sockets anywhere in the building.  My phone was dead, so I gave it to Ronny, who took it to the neighbors to charge it for me and I can get it back in the morning.  That seems suspect, but Nicolas said Ronny is a good man.  I hope…

As I was about to go to bed, there was a lot of noise going on in a bar across the dirt street.  It was Saturday so I decided to investigate.  I had to wait for cows to get past, and when I went to cross the street to get to the bar, there were lights moving inside and music for dancing was playing at crazy volumes.  It was enough volume that I figured I could probably meet a girl inside.  But, when I entered the bar, it was just a bunch of dudes sitting on benches, watching a football game, while music blared.  There was not a woman to be seen, and there was no excuse for music at such a volume while watching football.  I am in a dirt town in Uganda next to Lake Albert, but my phone will not find it by GPS….my data will not work because there is no mobile service here…there is nothing here, but there is a bar with insane levels of music blaring on a Saturday while dudes watch football.  I decided to go to bed. 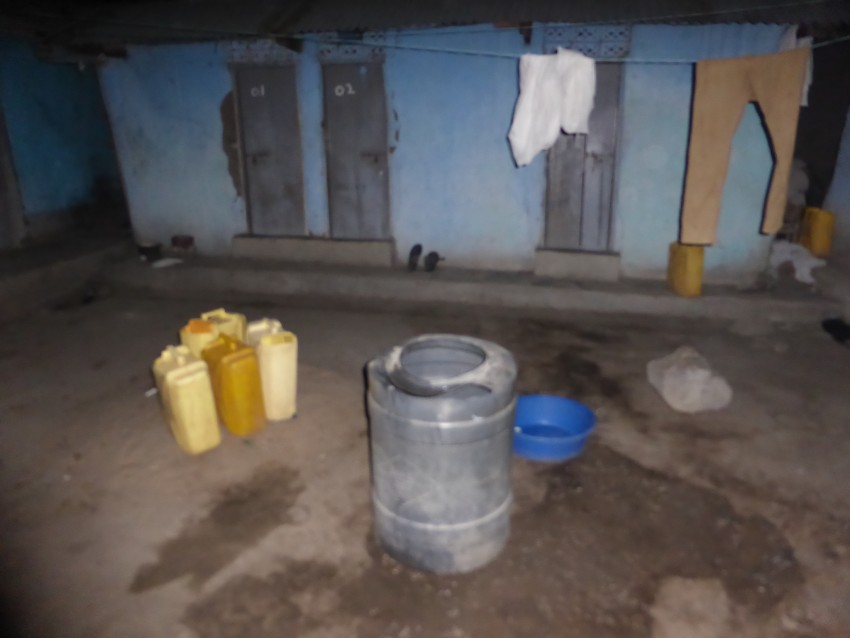 The sink at the Amooti Space Lodge and Restaurant.

When I was going back to my room, Ronny was showing me the toilet, which is actually just a shit-hole in a little wooden shack.  Then he told me, “And if you want to bathe, we have jerry cans full of water.”  That is the shower…a jerry can full of lake water.  Wow.  Where am I? 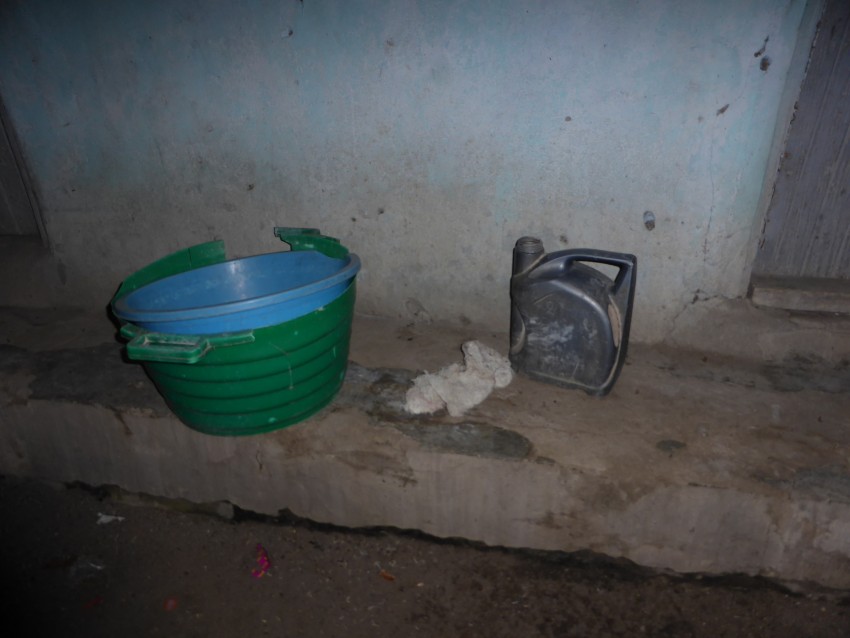 “Markus and I were at a street food bender and asking what some strange pastry was. It had thin pork floss on it. We asked the lady what it was called. She went on Googletranslate and put the Chinese characters in to tell us the name. The result through GoogleTranslate was ‘David Beckham.’ We laughed so hard. GoogleTranslate does funny things sometimes.”
— Beijing, China.
[View All]