There was a bus that was going to leave at 07:00 to go from Kibuye to Gisenyi, but that meant a 06:00 rise.  I figured I would try to find another way or hitchhike if I had to, but I did not need to get up so early for the bus.  By the time I showered, packed and was ready, it was 10:00.  My friend Martin from Germany was heading to a town half-way between Kibuye and Gisenyi where his girlfriend is from and he was going to get there for about $6 on a motorcycle.  It would be an hour and a half Motorcycling Rwanda, but I figured it would be an adventure, so I decided to join him. 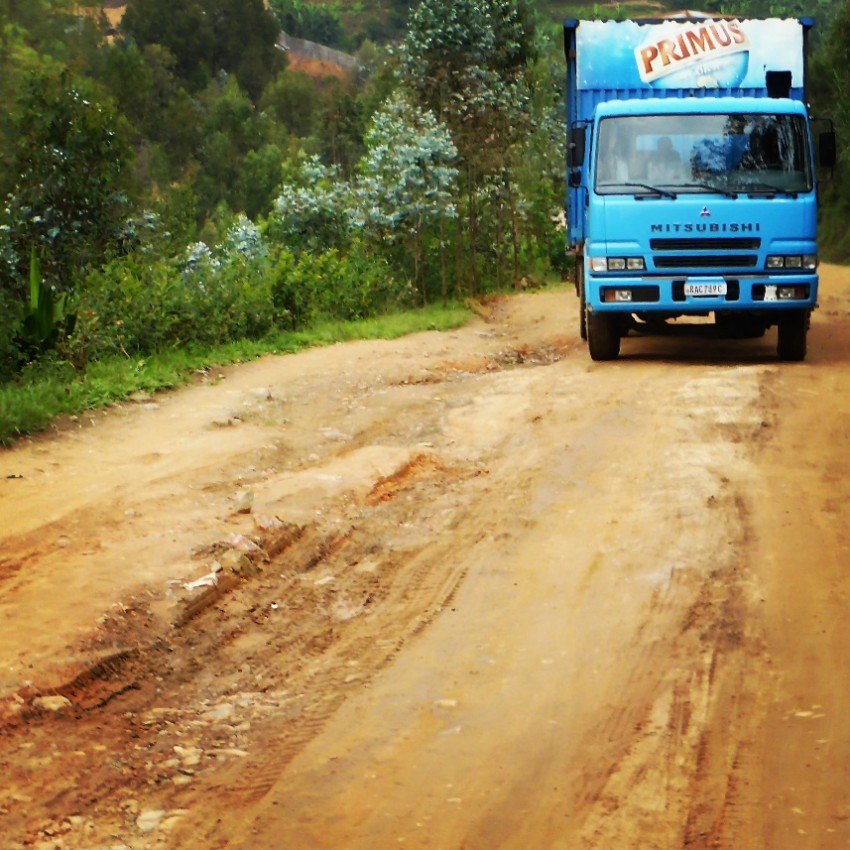 …That is the beer truck coming and these are the road conditions for about five hours.
Best let those tasty beverages settle for a couple of days…

People I had talked to last night told me that there are two roads to Gisenyi, one is bad and the other is nearly un-drivable.  Motorcycling Rwanda is nearly the only way to get around.  We ended up on the latter which was cool with me as a motorcycle is capable of going nearly anywhere.  The road was horrible, make no mistake, but the scenery was great.  And better than the scenery were the people walking down the road hauling tools for working the fields, bags of rice on their heads, branches, you name it.

I took a lot of photos on the drive Motorcycling Rwanda, but the three that I missed are the ones that I wish I had more than any.  There were two boys pushing a wooden scooter they had made down a hill.  There was a man walking with a large tray on his head and in that tray were between 8 and 12 live chickens.  It was amazing.

Since no one has a car here or a wheelbarrow, a bicycle does the job of both.  We passed by three guys with a wardrobe/dresser that was a least a meter and a half wide by two meters tall that they had stacked on a bicycle that they were carefully transporting.  Incredible feats are everywhere here, especially on the side/dirt roads.  The best parts of Africa are found on these little roads.  All I want to do now is arrive in a country and hire a man with a motorcycle who speaks some English to drive me from place to place around the country via dirt trails… 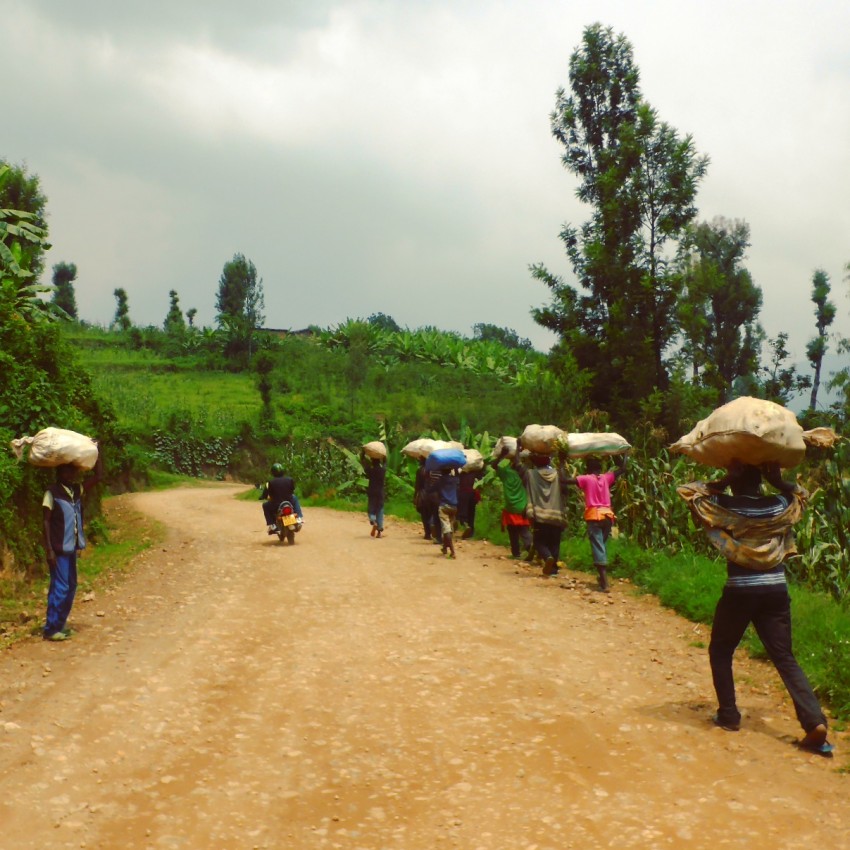 Hard working locals on the back trails of Rwanda.

Martin and I arrived in a town called Congo-Nile where Martin wanted to drop off photos for a friend at the HIV treatment center there.  Then, we carried on further to a hospital where his girlfriend’s father is sick.  The hospital was on top of a hill with a beautiful view of the valleys below.  Martin told me that for as many people were in the hospital, an equal number of people are outside waiting around who sleep there and await the return of health of their loved ones.  People really care about people here.  Maybe it is because it is all they have.  It certainly is nice to see the importance of love and commitment here.  I had a group of 8 kids following me around and sitting with me. 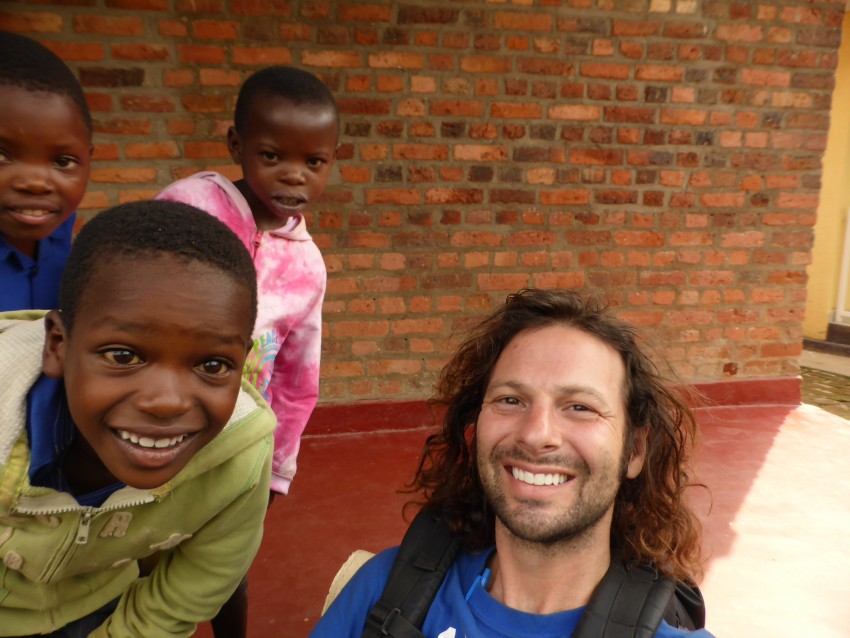 A doctor came up to me as I was sitting beside the hospital and asked me, “Can I help you?”  I told him that I was alright and I was just waiting for a friend.  He said, “Ah, good.  I wondered if you were here because you needed my health.”  I said,  “I hope you never have to help me!”  That made him laugh.

This is how rough the road was. It was nearly impossible to get a clear photo in the mini-van.

It was getting late, and with some help, I caught a motorcycle taxi down the hill and he chased down a mini-van taxi for me to take me the rest of the way to Gisenyi.  More Motorcycling Rwanda.  We could see the mini-van taxi departing from up on the hill as we were coming down, but the mini-van can only travel the speed of a child running (I know this is the case because many of them out-ran us to catch us) so we got to it a couple of kilometers from town.  I got the last seat in the back and we traveled on teeth chattering roads at the speed of about 10 km/h for 3.5 hours.  I sat next to an old woman who I shared my peanuts with and bought her corn on the cob.

By the time I found a guesthouse after a motorcycle taxi-man got lost twice.  I wanted to go out and explore the town, but I was so exhausted that I ended up going to bed almost directly.  I had been shaken and tossed around like a bug in a jar that a child had caught, and I was physically exhausted… 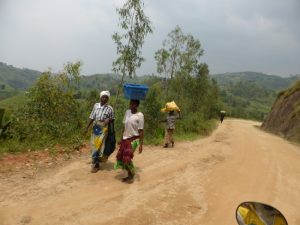 Locals busy travelling down the road. 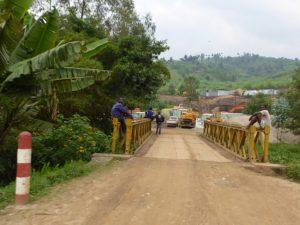 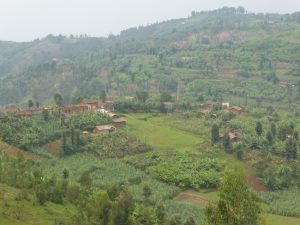 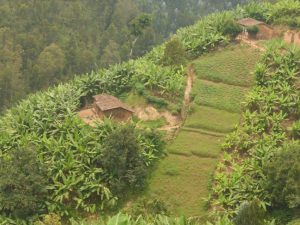 I like this little house on a flat that he has obviously created himself. 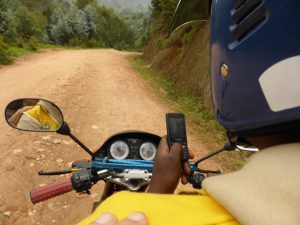 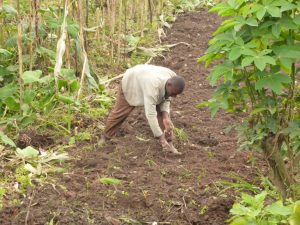 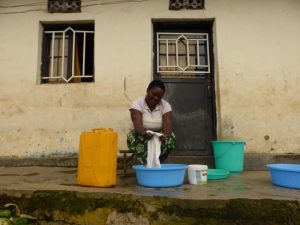 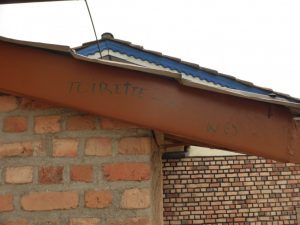 I love English attempts at spelling. It makes me smile. 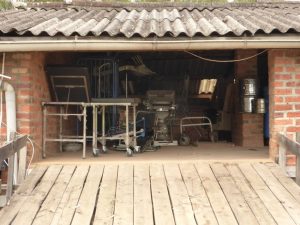 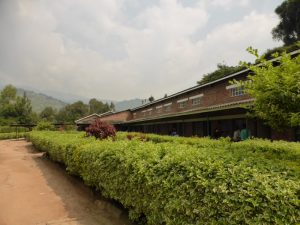 “The highlight of my day was when I had to carry a heavy propane tank for the stove in the house down from a bar high up in the favela where Csilla bought it.  Irmante asked me if she could help to carry half of it, which I readily agreed.  Then Csilla came up behind us and asked, "Is there any way I can get in there with you two?"  I told her, "I have been waiting for a girl to ask me that question when I was with another girl for my whole life, and finally it gets asked.  Unfortunately though, it is when the other girl and I are carrying a propane tank."  How anti-climatic....”
— Csilla
[View All]