Well, that sure escalated and got out of hand… I ended up getting college frat boy wasted, but it sure was fun….

I checked out of my guesthouse and moved to Panafrican, which is the sports bar where I was last night and made friends with Joseph, the owner.  He told me they also had rooms for around $10, which is half of the price I have paid for the previous two.  I checked into a good room and then Joseph drove me in his car to Amahoro National Stadium for the African Nations Championship of Football 2016.  Rwanda was playing Congo in the quarter finals.  (*Amahoro Stadium was used during the genocide as a temporary UN Protected Site and hosted up to 12,000 refugees.)

Yeah! Tickets for the game! That was easy. $5 for two tickets at inflated double prices. Bargain!

Joseph told me I would be lucky if I found a ticket to the game, but as soon as we got close to the stadium, a tout had two tickets that I bought for $2.50 each.  He had doubled the price, but $5 for both tickets was a heck of a price for such an experience.

Joseph had not really wanted to go to the game, preferring to watch it on television, but now he had a ticket.  I am sneaky…

We found parking (that I paid $2.50 for) and got into the line for the stadium.  The energy was fantastic and many people were painted in Rwandan colors and dressed up.  It was still an hour and a half before game time, but we had to be early to find seats.  Joseph, who seems to be the mayor of Kigali with the amount of people he knows everywhere he steps, had a friend named Leopold who sat with us. 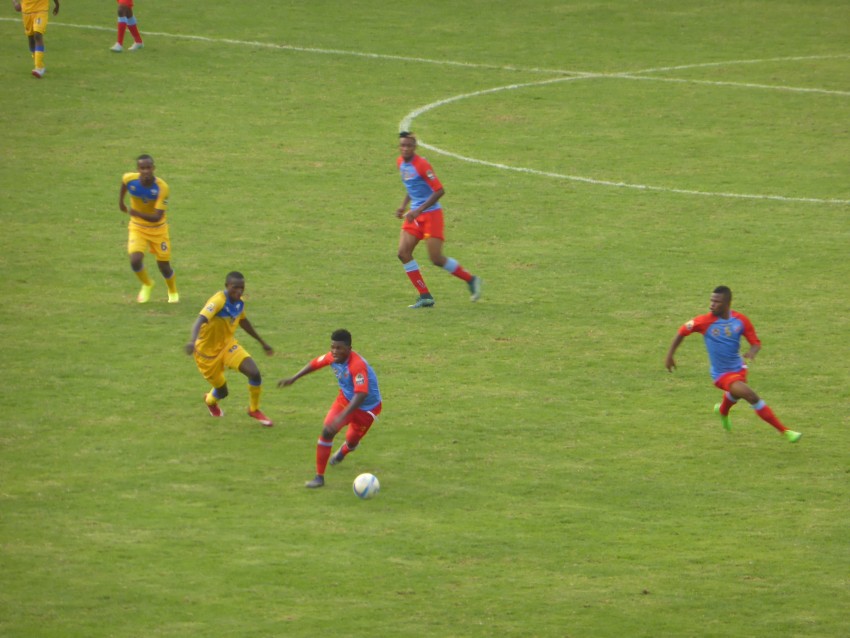 I had a plate of fries and a boy of about 11 was looking at them as I was eating.  I offered him some.  He had a couple and then his friends noticed that he was eating my fries.  Three other boys came over and within two seconds, or maybe even less, eight hands had consumed the entire plate and it fell to the ground.  The plate emptied so fast, it sort of scared me.  It reminded me of a school of piranhas attacking raw meat.

When I could not get my phone to work, Joseph told me that the phone network had been cut for the game.  Crazy.  Strange. I had not eaten anything all day, so I consumed three small bags of peanuts to silence the worms.  There was beer for sale, but the stadium seating was so tight that it was too much of a hassle to get to the tasty beverage. It also would have been a real inconvenience to have to pee throughout the game, so we just cooked in the sun and watched football beerless.  At half-time, I went for a walk through the stadium to get photos of the fans. 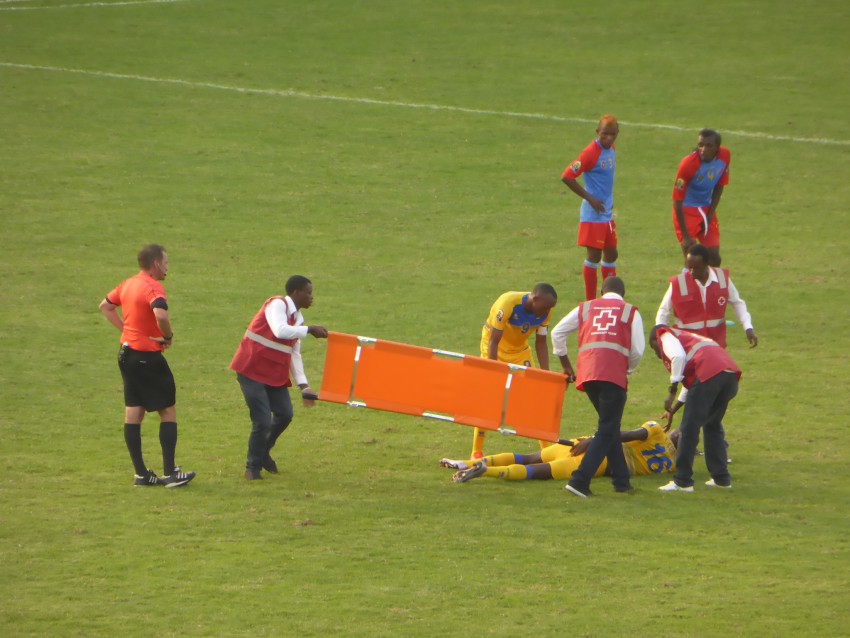 Oh the drama of falling down and acting hurt. A regular and unbearable spectacle of embarrassment to the game.  Team Spiderman seem to be dangerous!

Going to a live football game only reinforces my views that it is a shameful game of little bitch-men wincing around on the pitch in pain from falling down.  It is possible that someone might have bumped a player and then they need a stretcher to retrieve them to take them to the sidelines.  Then two minutes later, they are back in the game.  The stretcher came out at least seven times during the 90 minutes, one guy being stretchered off two different times in a span of about 10 minutes.  It is disgusting.  There needs to be a rule implemented that does not allow someone stretchered off of the pitch to return for the duration of the remaining time of that half of the game. 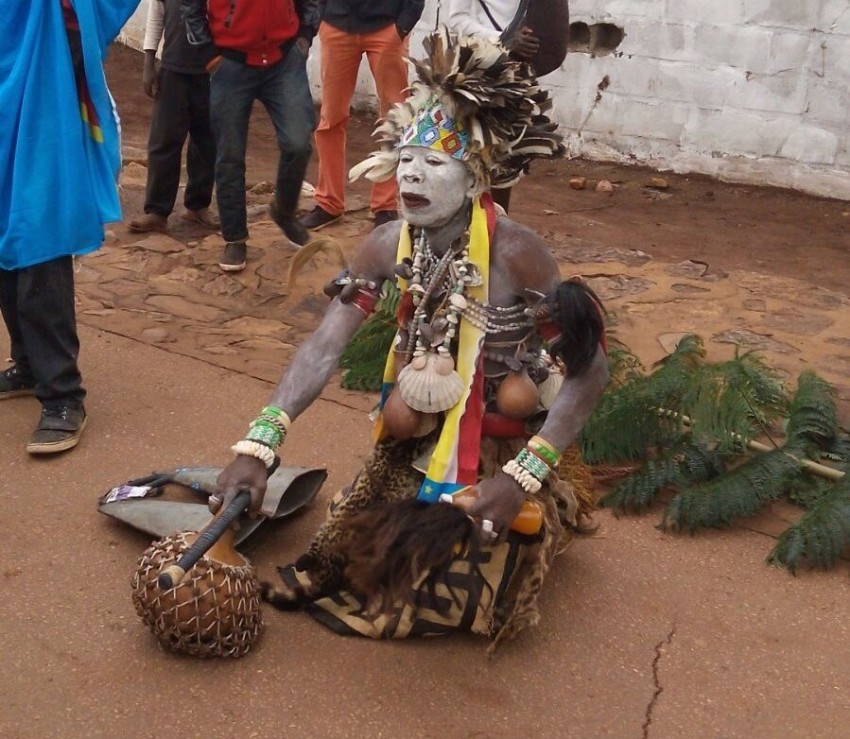 Many Congo fans were a part of the crowd at the game.  I was told that the government of Congo sent 30 buses with 900 people to Rwanda for the game.  Congo won the African Nations Championship quarter final 2-1, which was great for the travelling fans, but disappointing for everyone else in Rwanda. It would have been nice to see Kigali go wild at night.

Joseph, Leopold, a 20 year old girl, who is friends with Leopold, and I went for a beer after the game. We had to wait for the traffic to die down so that we could get away from the stadium.  Joseph told me, “If Rwanda had won, right now everybody’d be looking for a beer and Congo would be running…back home.” 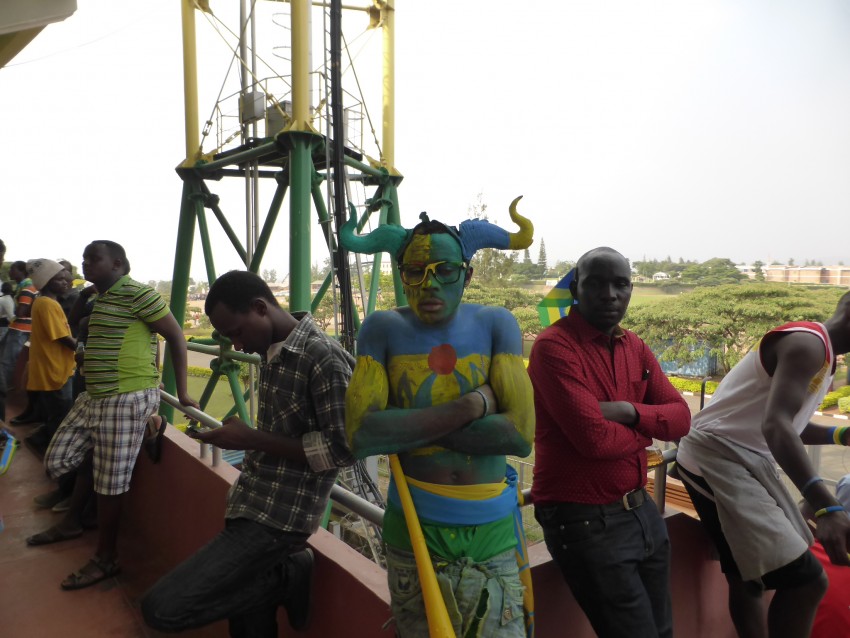 We had three beers in the bar and then the four of us went for a drive around the city.  I know it is stupid, but I sure have fun drinking in a car as we cruise around a city.  I would not get in a car with someone totally smashed, but I assumed that Joseph knew what he was doing after three or four beers.  Joseph told me that Leopold is, “A very big drunk, and a very good driver!”  I know.  I once came from that life as well…

Joseph, said like most of the people he knows, that he has no parents.  He told me that his parents sent him away to study in Uganda.  He came home to see them during holidays, but his father sent him back early.  He said his father could sense something in the air.  Joseph never got to see his parents again and lost three of his five siblings.  He said he is a common story.  It is so sad…
We eventually ended up at a bar in another part of the city where we sat at a table on a sidewalk and talked to everyone who walked past us.  I was teasing our waitress girl and having a lot of fun.  She was very dark.  Joseph said that dark-dark is the best.  Later when two lighter-skinned women came walking past Joseph said to me, “Don’t look at them!  They are brown!”

Later, a man came up to me on the street talking about how it was nice to see me again.  I had never seen him before, but he was telling Joseph that we knew each other.  I told him I have only been in town for two days.  He was shocked.  I said, “Ah, it was probably another white guy.  You all look the same!”  My table of friends liked that…

The twenty year old girl with us was sitting on my lap and had her hands on my legs.  I was quite happy with how it was going.  Leopold decided to intervene and asked her to go home.  He told me, and this is quite perverse, “For us, we don’t take the dry ones.”  Really.  I was disappointed, but Leopold said that she was probably not a wet enough girl.  Really.  He and Joseph had been telling me that ‘wetness’ is a specialty of Rwandan women and they did not have high expectations for the twenty year old. They wanted me to have the best so she was sent away.  Joseph said, “I want one for you that will have a lot of water…It is the best.”

About 20 minutes later, two women sitting at the table behind ours came to join us.  One was beautiful and ended up sitting next to me.  The other sat beside Leopold.  In the meantime, a motorcycle taxi arrived and someone delivered Leopold’s phone to him.  A half of an hour later someone delivered his vehicle to us and then left on a motorcycle taxi.  Leopold is a big man in the banking industry here in Kigali.

Leopold took me, his new girl, Joseph, and my new girl, Nana, to a bar called Tiamo, where live music was supposed to be playing.  We missed it, but partied in the bar anyhow.  Nana, could only speak about six words of English, but we made it work.   She and I were very naughty on the dancefloor.  At some point, the five of us left the bar and I took Nana up to my room and we had sex.  Awesome!  What a fantastic day and a crazy night… 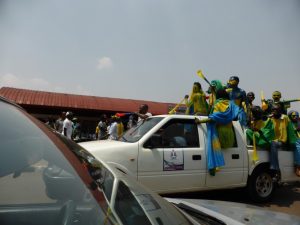 Rwandan fans arriving at the game. 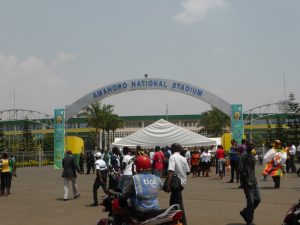 Amahoro Stadium. During the Rwandan Genocide in 1994, it was temporarily a “UN Protected Site” hosting to up to 12,000 mainly Tutsi refugees. 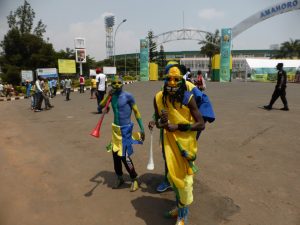 These people dress up proudly! It is awesome. 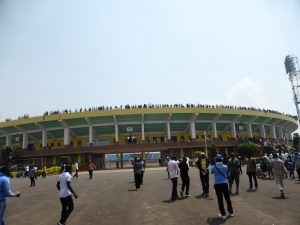 Fans in Amahoro Stadium on the top row. 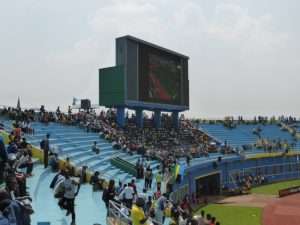 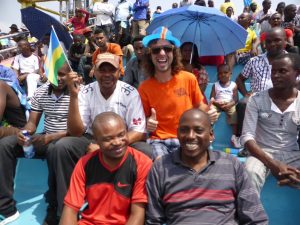 Yea, game time. That is a Congo flag hat I am wearing. 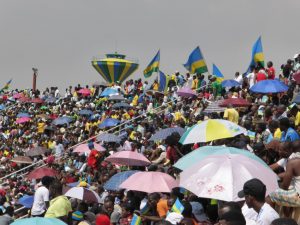 Sunbrellas and the colors of Rwanda. 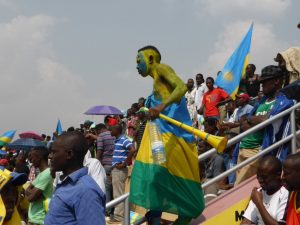 This guy was one of my favorites. He even had spots painted on his body. 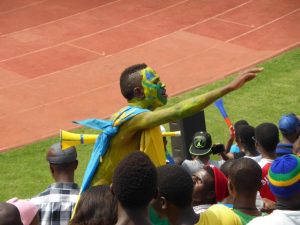 He had a lot to say. 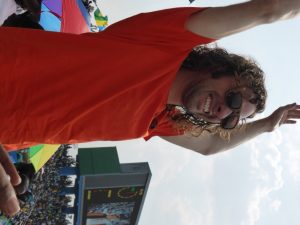 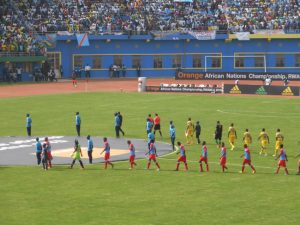 A team of Spidermen Vs Rwanda. 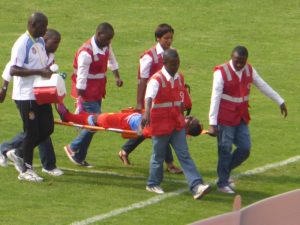 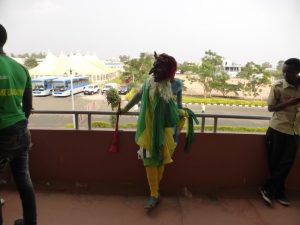 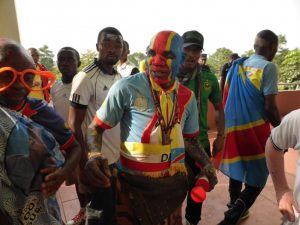 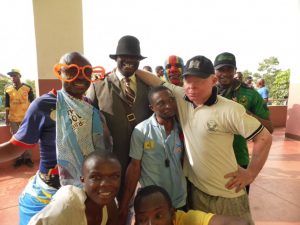 A mixmatch of Congolese people… 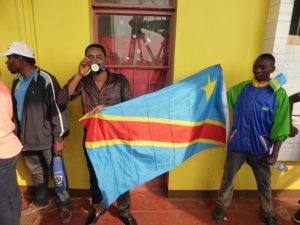 Congo flag. This man asked for a photo. 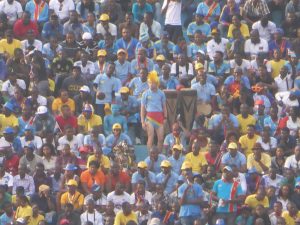 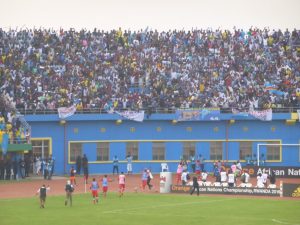 Democratic Republic of Congo player celebrating victory in front of their fan section. 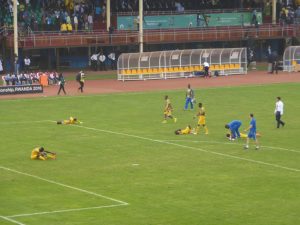 Rwandans down and out. I was told that they get $1,000 each for every win by their president. 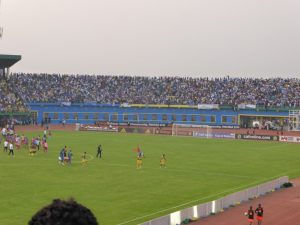 The guy in the middle doing a flip in celebration. 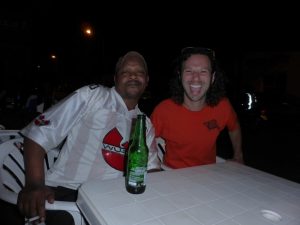 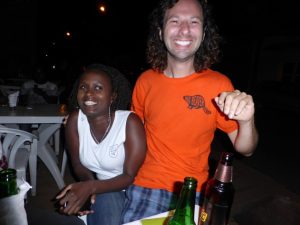 Mischief with a waitress. 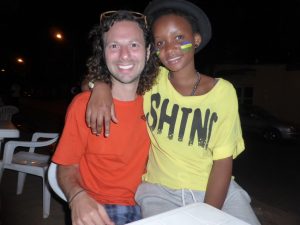 A girl who spent time with us during the night. 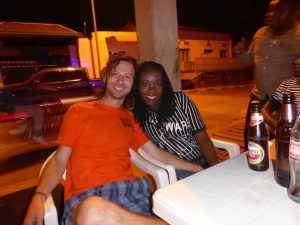 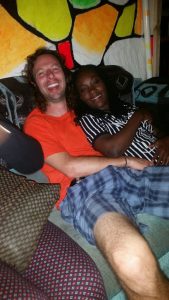 It was a fun night!

“I headed out in Buenos Aires and found cheap pizza. A slice was the equivalent of $0.85 U.S. I ordered a slice and a beer, but all I had was the equivalent of a $1 or a $10 for bills. The lady behind the counter told me that I was not allowed to have a beer and took my $1 for the pizza so that she would not have to give me change for the $10. Awesome! Things like that make me smile. Never in North America or Europe: they would never miss a sale and more income. Maybe money is not so important in cultures here, and perhaps that makes the people happier...”
— Self Realization
[View All]