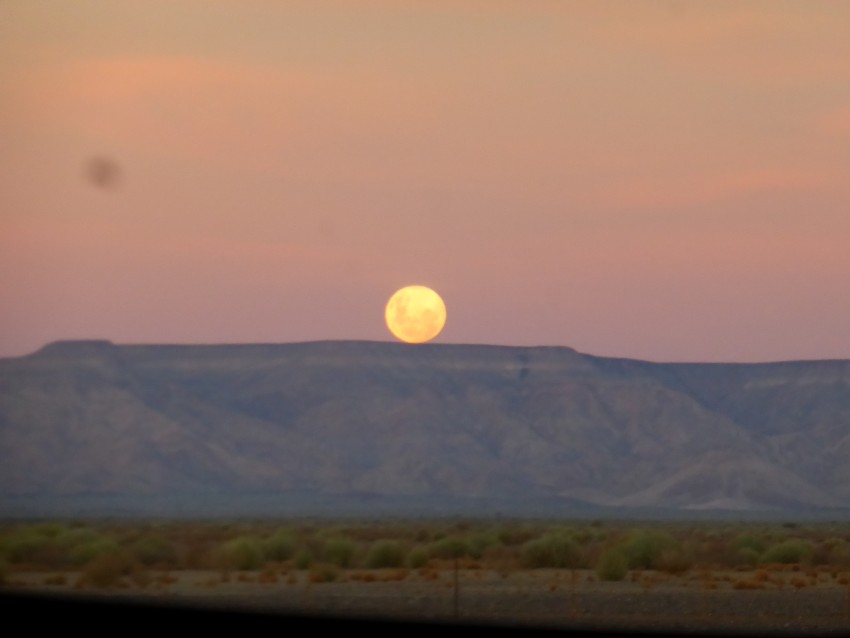 April 21
It drives me crazy how much plastic is wasted in Africa.  There is a serious lack of education on how destructive its destruction is as they can not seem to waste enough of it on this continent.  If you go into a supermarket in Namibia and you buy a juice, the people working will put it in a plastic bag if you do not stop them.  If you buy one banana, plastic bag.  Can of coke, plastic bag.  Bottle of water, plastic bag.  I stop them every time, say, “Oh, I don’t need that.  We’re killing the planet,” and they look at me like I have said the most inappropriate thing.  I exit the store.  They think I am weird.

The driver was using Q-Tips to clean his ears as we were driving down the road at 120 km/h.  Evidentially, even though he was two hours late, life was still too much of a rush for him this morning.
I was ready for my 07:00 mini-van bus to take me from Lüderitz to Keetmanshoop for 170 Namibian dollars ($11.95).  The bus driver called me just after 07:00 to tell me they would be 15 minutes late.  They arrived just after 08:00.  Once I got into the van, they drove with me all over the town to pick up others.  At 08:55 we drove right past the hostel where they had picked me up about an hour before.  At 09:03, we put fuel in the tank and left town.  I will not miss African time or African logic or African organization.  I can hear cynical-ness right now, though I really do love it here.  Things always seem to mount up when you are in a different place for six months.  That seems to be the timeline point.  I first noticed it at about the same time-frame when I was in South Korea. Things I thought were so interesting because they did them so much differently in their culture than I was used to began to drive me crazy after six months for the same reason.
Namibia is really different from most of the other countries I have been to in Africa.  From the Germans being here for so many years, the people really are blended.  In Tanzania, people generally have one similar skin tone.  Here in Namibia people with African features are every tone from coffee to cappuccino.  It is pretty cool to have such a blend. 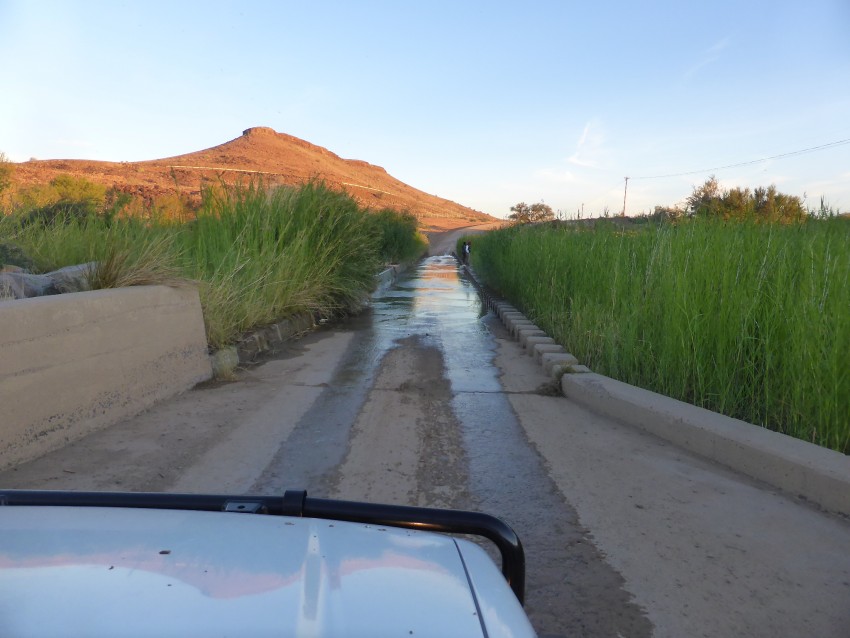 When the mini-bus arrived in Keetmanshoop at 14:00, I immediately went in a search for a rental-car to drive to Fish River Canyon.  In a tire shop, I found two different phone numbers where I could rent. One was called Blitz Security and the other was to a man named Rudy Basson.  I asked directions and walked to Blitz.  There, they called Rudy.  Apparently, he has the monopoly in town and both roads out of here are through him.

Rudy had no cars.  He only wanted to sell me a trip for 2,240 Namibian dollars ($157) where he would drive me.  I did not need someone to hold my hand.  I asked him about renting a vehicle.  Nope.  Did he know anyone who had a vehicle I could rent.  Nope.  No friends with cars?  Nope.  Was there any way that I could do this trip without his $157 trip?  Nope.  Was he interested in helping me or providing any insight?  Nope.  He told me that I was not going to get to Fish River Canyon without him.  I told him there are always other ways.  He said there are no other ways.

I told him to never underestimate a determined man.

I began approaching people on the street to run the idea of renting their cars from them.  Everyone wanted to help, but no one could spare a vehicle.  I found the taxi stand and I began talking to the taxi guys, asking several them if they knew of anyone with a car that I could rent or if I could just rent their car from them.  I had the discussion with at least seven different taxi drivers.  I asked them what they usually make for an income in a day.  They told me between 500-700 Namibian dollars.

I suggested to several taxi guys, “How about this.  I will give you 500 Namibian dollars ($35.17) for your car for 24 hours and I’ll bring it back with a full tank of gas.  You can have the day off but it will be like you went to work.  You will still make that money.”  They all hummed and hawed at the idea, but they were uncomfortable with the idea.  Everyone wanted to drive me there, but I did not want to have to pay for a man’s time as well as his car.  The one guy who wanted to make the deal told me that he did not have insurance on his car and asked what would happen if something happened to the car.  I told him that made me too nervous.  He told me that it made him too nervous too.  By now, I had been on the hunt for about an hour and a half. 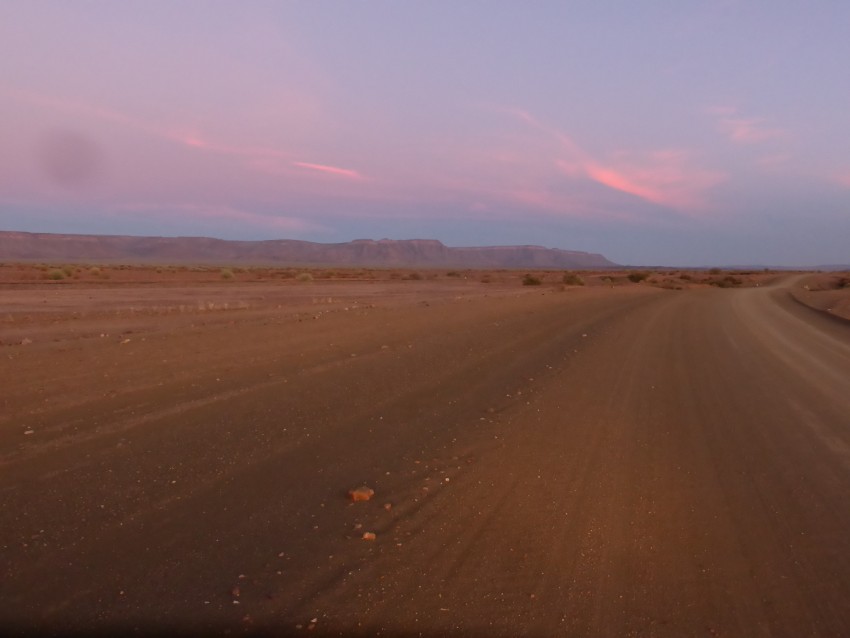 A determined man on the road to Fish River Canyon with beautiful pink sunset clouds on the horizon.

I approached another taxi man, who directed me to another taxi man named Shu-Shu.  Shu-Shu told me that he knew of a place that rented cars.  I was apprehensive because no one else knew of any such place in town besides Blitz Tourist Exploitation.  I got into the taxi with Shu-Shu and we drove to a car dealership.  Nope, they had stopped renting some time ago.  Shu-Shu got on the phone and we drove to a business called Linxano.  We met with his friend Aubrey.

Yep!  Aubrey told me that he had a car for me.  A car!  Whoooee.  I asked him how much.  He said they rent a quad-cab 4×4 Toyota pick-up for 750 Namibian dollars ($52.76).  I did not even think about it.  I just asked him to get it ready as quickly as possible so that I could try to arrive at Fish River Canyon by sunset.  Aubrey handed me a rental contract and we went through the pick-up together to check for dings and scratches.  I put fuel in it and skedaddled out of town! 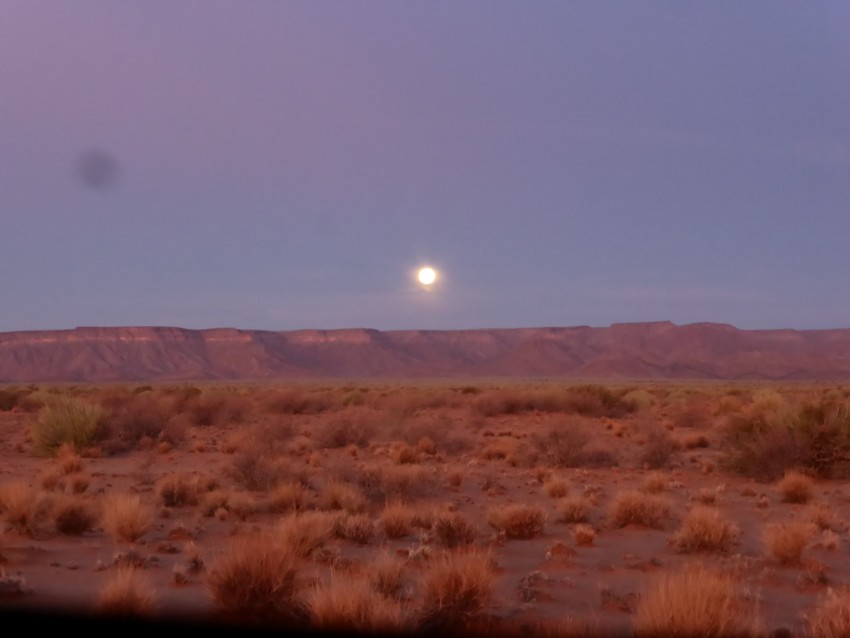 It was 146 kms from Keetmanshoop to Hobas Camp Site, which is 10 kilometers from Fish River Canyon’s main view point.  I missed the sunset and arrived at the gates in the dark.  Charlie, a super friendly man in charge of security told me he could check me in even though it was after-hours to camp and I could pay in the morning when the office opened.  I told him to come and join me in my campsite for a beer.  The campground was super quiet tonight, but Charlie said there was a bus full of people last night.  He said, “They were noising till 1AM.”  Noising!  Noising is for sure now my new favorite word of the week.  I totally get it!  The ‘noising’ could have been from ‘singing’ or ‘yelling’ from ‘drinking’. 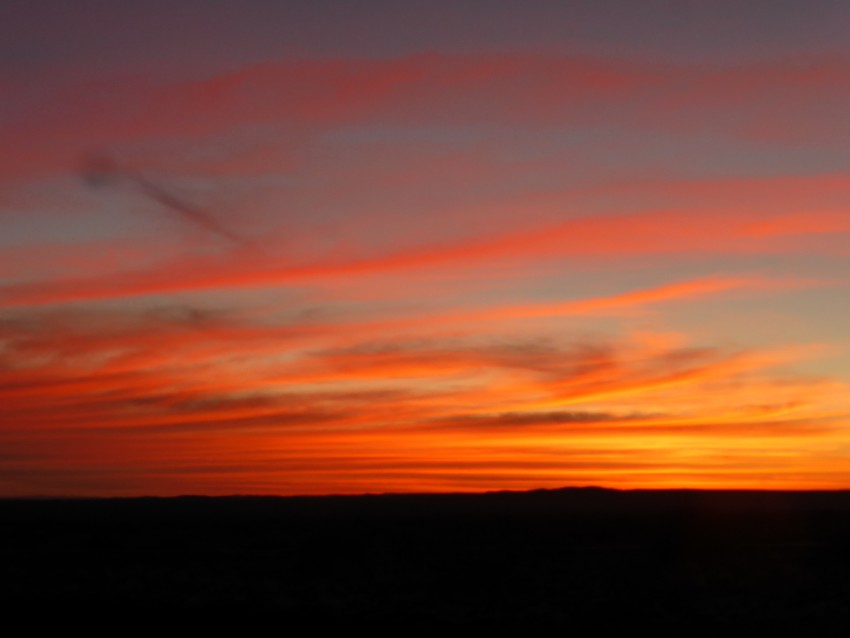 A sky of colors.

My campsite was really just the pick-up truck that I drove.  My tent was actually just the back seat of said vehicle.  The beautiful and large campground was empty except for one other vehicle besides my back-seat-tent-truck.  Charlie came over for a beer and I went to the other campsite where a Dutch couple sat sipping wine.  I invited them to my site for a fire and they brought beer.  Wonderful.  It was a really nice night and the four of us had a great chat.  I love the Dutch.  I always always always like those people!

The Dutch have fun words that we do not have.  Try these: ‘Naokmertje’ = Literal meaning – ‘Little after coming’.  Translation – Having a gap between most of your children and then another arriving a few years later.  ‘Tweedeleg’ = literal meaning – ‘Second laying’.  Translation – Having a family with one woman, divorcing, and then having another family with a second wife.

Note – A very strange event took place here at Fish River Canyon in January.  Apparently, a younger German girl, who was teaching in Otjiwarongo, was killed in a car accident.  Her family was notified at home, so her sister and mother came to Namibia to collect her remains (the ‘remains’ could be her possessions or possibly her ashes.  ‘Remains’ were not defined).  After the sister and mother had her remains, they drove to Fish River Canyon to bury them.  They stayed here in the campground for some days and then they disappeared.  They did not come back to the tent and the rangers became suspicious.  A search mission was carried out.  Eventually, they found the mother and daughter; they had both committed suicide by jumping from the edge of canyon.  They had been found tied together with rope to carry out the deed.  A suicide note was later found in their tent.

Since the note was found in their tent, and the canyon is situated 10 kilometers away, makes it clear that this act was planned for some time.  It is just such a strange story.  Imagine tying yourself to your mother (or daughter) to throw yourself off of a cliff after your sister (or other daughter) has died.  What a peculiar story.  I asked Charlie about the two of them as he had spent time chatting with them.  He told me the mother and daughter were jovial people.  He said would have never guessed anything like this was on their mental horizons.