April 17
I was up at 06:42 to get ready, made my goodbyes to Lala and Francois Loubser, and was on the highway by 08:30 to try to thumb a ride to Sossusvlei…about a six hour drive away.  I have had a very easy time hitchhiking around Africa.  Namibia has decided to take a different pattern and it was not kind in supplying rides.  I stood on the side of the road in the same place for three hours.  I was even wearing my cowboy hat.  A cowboy hat gets rides!  Not here… 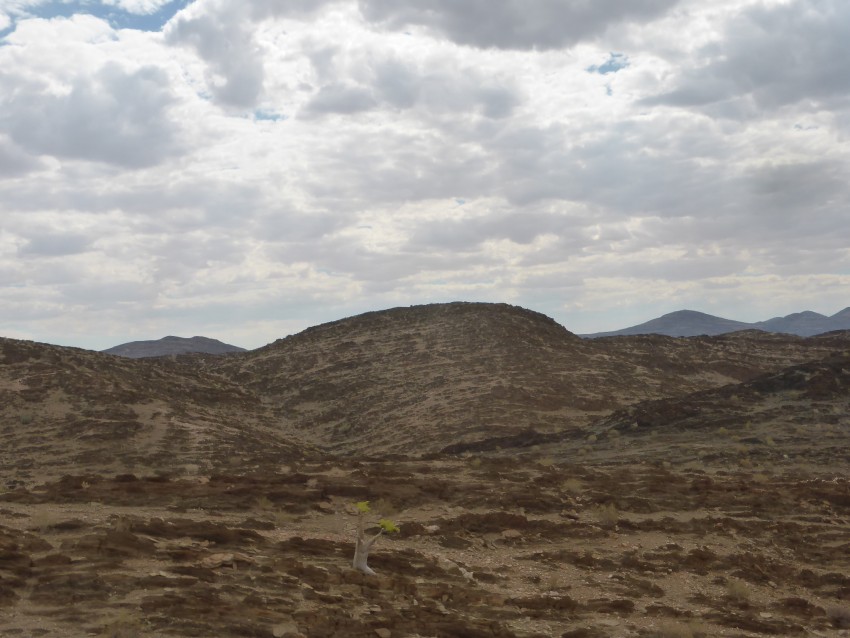 The sole green tree on the barren land.

I was tired of standing on the road so I made a deal with myself.  I told myself that I would wait until 12:00, and if I did not have a ride by then, I would skip the Sossusvlei sand dunes and just head directly to a town called Lüderitz.  I figured the hassle of it all was a sign that I should not bother with Sossusvlei.  I have been conjuring a way to get there for two days.  I had actually given up and was just waiting until 12:00 to appease myself. I could not wait for 12:00 so I could just get out of there.  At 11:58, a wonderful human named JP pulled up in a pick-up truck (aka a ‘buggy’ in Namibia) and told me to jump in.  Wow.  Two minutes to spare on the whole idea of going to Sossusvlei…saved. 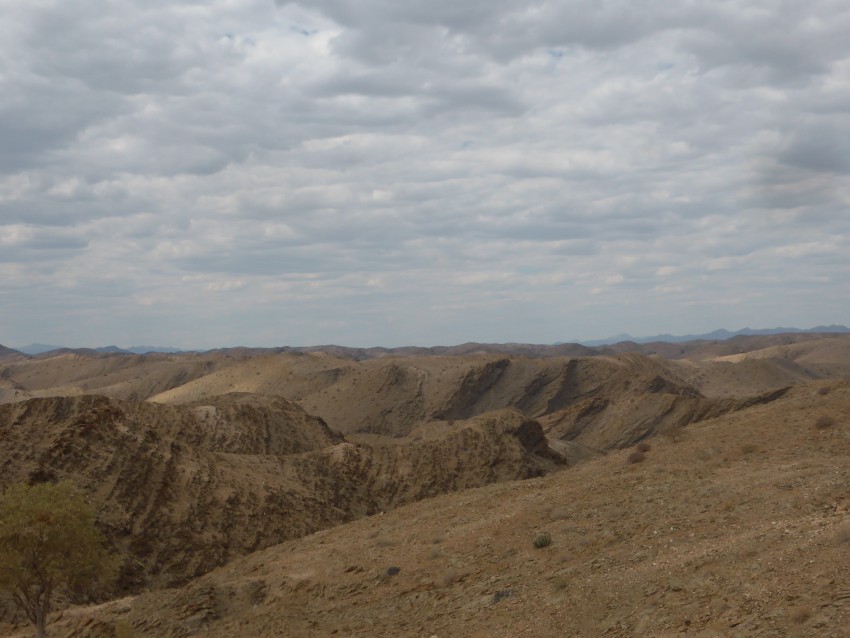 JP calls zebras ‘pajama donkeys.’
JP turned out to be a great guy and is a little of everything, including a botanist and a tour guide.  He told me about every plant and tree that we passed.  It was nice to hang around with him.  The colors of the Kuiseb Pass, the reds and the browns, and the topography of the land…so so gorgeous.  The colors of the mountains contrast each other so much.  There will be a white colored mountain directly behind a red mountain.  They are brothers in shape and context, but they could be more different in shades. 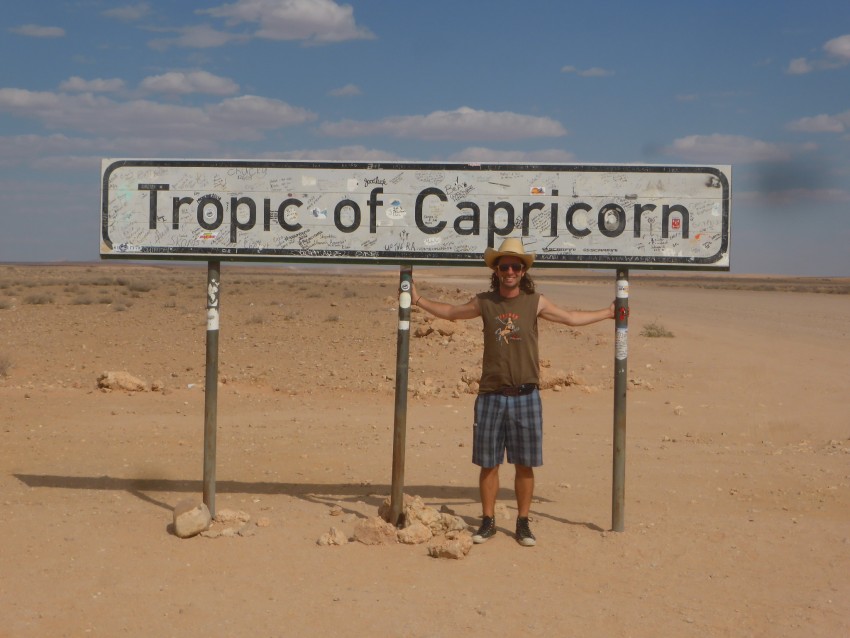 As we got 20 kilometers from a town called Solitaire, I noticed a vehicle in the distance that was on its side.  Referencing it, I was talking to JP about how much scrap metal is laying around in Namibia.  We were in the desert, on a gravel road, away from anything and everything except isolation and the aforementioned town called Solitaire.  As we got closer to the vehicle, we noticed that there were fresh skid tracks across the road trailing to where the vehicle was laying about 50 meters from the gravel road.  JP said, “Whoa, I think this just happened.”  We stopped our car, got out, and began footing it towards the wreck.

I hope this is not the worst case scenario…

As we were walking along the shattered car pieces towards the vehicle, there was luggage spread about that had flown out of the truck.  I said to JP, “Oh man, I hope this is not the worst case scenario…”  I hoped as much as I could that JP and I were not the first on the scene and that someone else had already been there before us who had taken the accident victims away to the hospital.  But, with luggage remaining on the scene, I already knew what that meant…

The bottom of the vehicle was facing us.  I was going to yell out to see if anyone would answer but the scene felt so eerie that I remained silent as we walked.  JP and I had to go around the front of the vehicle to see inside.  It is terrifying to be arriving in that situation because you do not know what you are going to find on the other side. 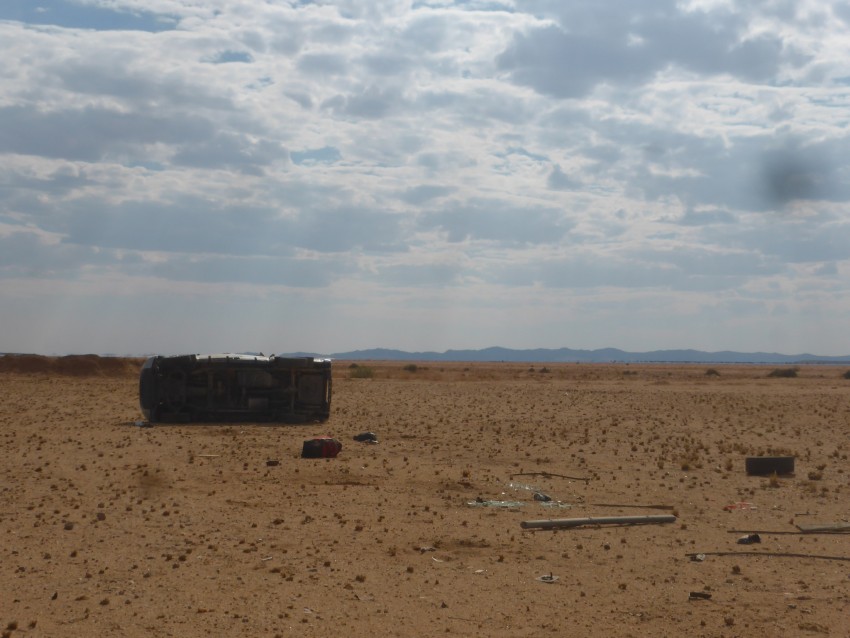 ‘Oh oh…’ I actually snapped this photo on the fly as we were rushing to the scene.

I could hear the clicking of a turn signal coming from the vehicle’s silence….

The first thing that my eyes focused on when we got around the vehicle was the white arm of a lady. She was hanging from her seatbelt on the high side of the vehicle.  I could see blood.  I asked her if she was alright.  She could speak.  Her name was Christine.  There was a guy on the bottoms side, still in the driver’s seat.  He was not moving and had not made a sound.  I asked her if he was alive.  She said he was.  He eventually acknowledged us, but this was the first time Christine and the man had responded to each other since the accident had happened.  From that, I assumed that the accident had only happened a couple of minutes before our arrival.  The blood inside of the truck scared me about what type of injuries we were dealing with.

Amazingly, a police officer came along the desolate road moments after we got the two of them free.  He called an ambulance.  It took 90 minutes for the ambulance to arrive, and all of the time Alejandro kept on asking the same questions over and over.  “Christine are you alright?  What happened…I don’t remember anything?  How long have we been here for?  Where are we?  I have seen you somewhere before, maybe in Solitaire, right?”  I just kept on answering him over and over and over to try to keep him comfortable and calm. 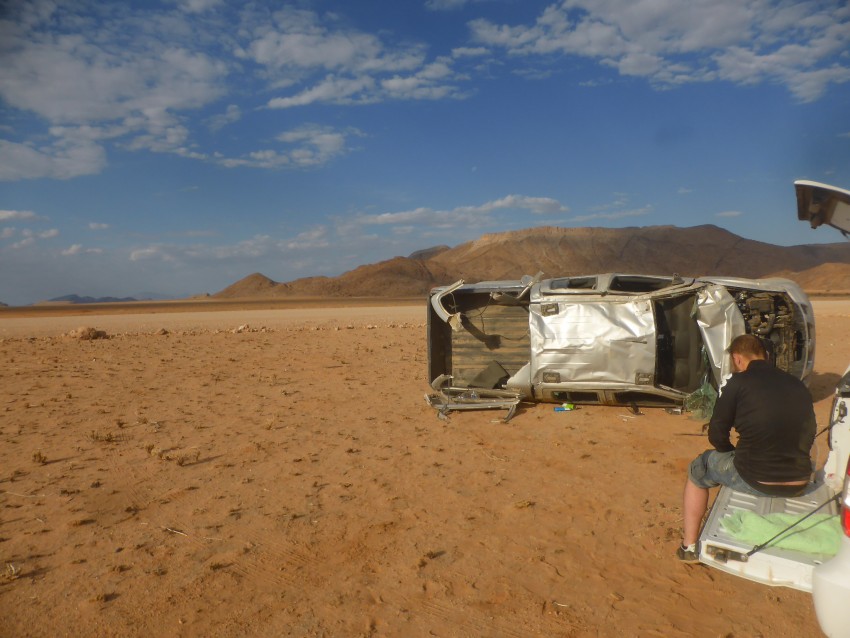 Alejandro, looking at the scene, and wondering what had happened.

Eventually the ambulance arrived and the paramedic was worse at his job than JP and I would have been had he not arrived at all.  He tried to put a drip line in Christine and made her bleed everywhere.  He was asking JP for advice.  It made me realize how dangerous any kind of injury would be here.  If you are coming to Africa, you should take a First Aid course first, just to be able to help yourself a little.  The cop also had no idea what to do and JP sort of took charge of everything, including calling Christine’s family.  A couple of hours after we first arrived on the scene of the car accident, the ambulance was finally ready to take Christine and Alejandro away. 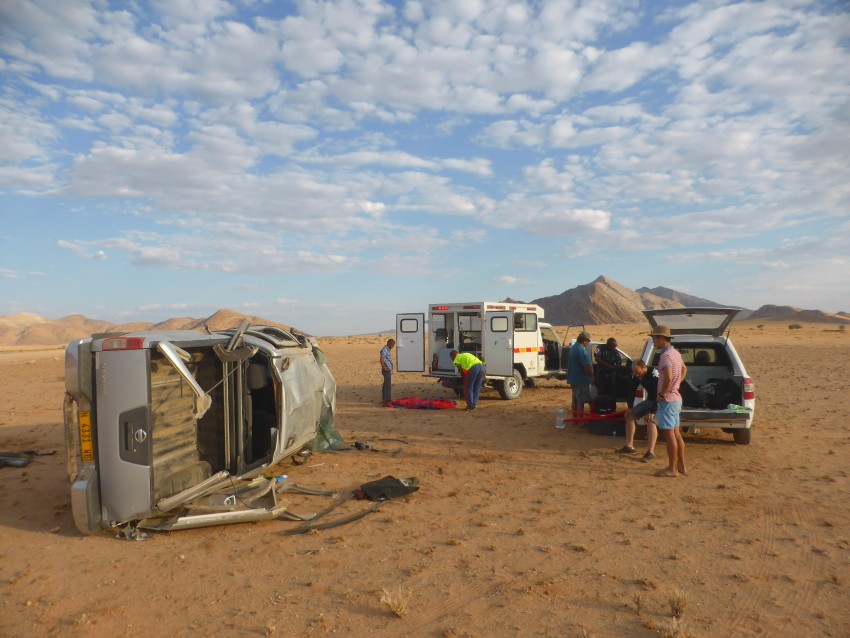 The whole scene of the car accident.

Well, ‘good deed for the day’ completed.  I have now been the first person at the scene of an accident.  You always wonder if that will happen to you.  It is my one.  It was not so bad.  I hope I never had to be in that situation again (knocks on wood!). 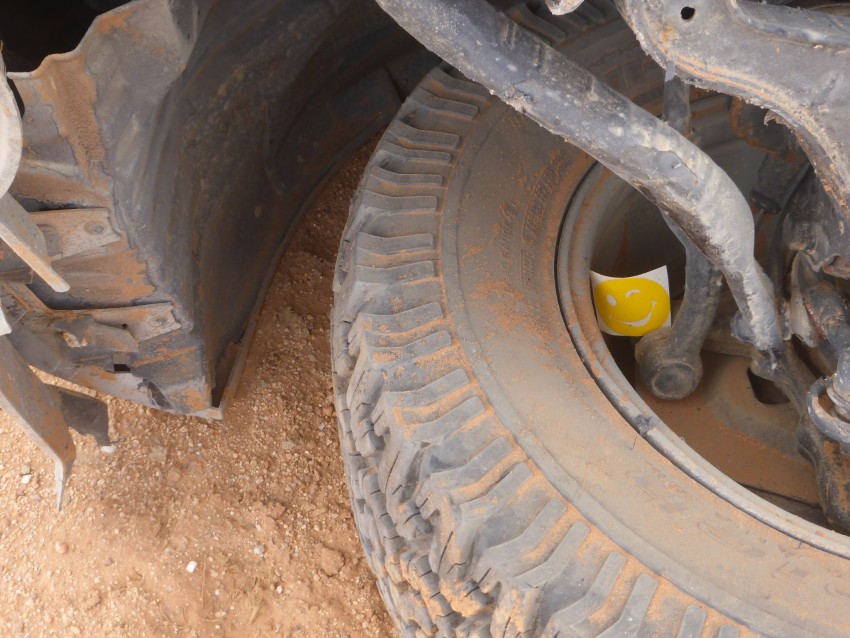 The irony. I found this smiley face laying just like this in the wheel in the aftermath of the accident.

JP and I drove to a lodge just outside of Solitaire to sleep for the night.  The place was a resort in the middle of the wilderness and it was fancy.  I could not afford it at all, but there were two beds in JP’s room.  So, I got one of the bed mattresses and moved it outside of his room and onto the cement terrace outside.  On that wonderful bed with a fluffy blanket that my finances are unaccustomed to, I went to bed at midnight and slept under the stars in the wilderness of the Namib Desert. 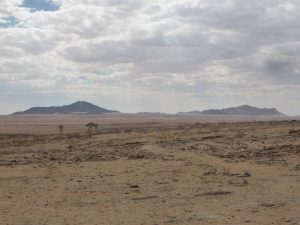 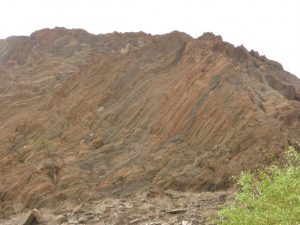 The colors of the rock… 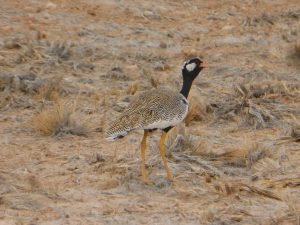 A damarakoraan (sp?). Also called a ‘Flying Frog’ because of the sound it makes. JP called got its attention with his version of a female mating call. 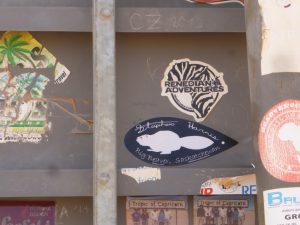 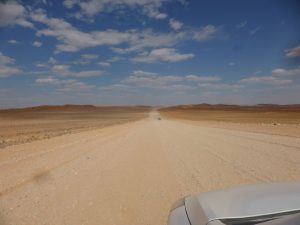 The Namib Desert after the Kuiseb pass. 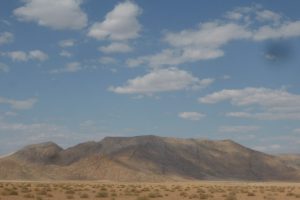 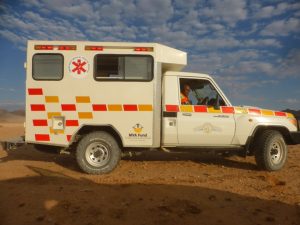 Finally. Ninety minutes later. It sure is lucky their injuries were not worse.

“She is training and she said, “I can still feel it in my hands...” and told me the story. The ambulance got a call and they rushed to a senior citizen's home where a 95 year old lady was not breathing. Protocol is to do work on her, so she did mouth to mouth on the lady and then she did chest compressions. She said that she broke her ribs doing the compressions and that is what she could still feel in her hands, all of these hours later. She did five rounds of CPR on the little old lady and they even shocked her to get her heart going again. It was to no avail. She told me, “The lady had probably died peacefully in her sleep. And if we had been able to revive her, she likely would have been brain-dead from the electricity we put into her to try to get her heart going.” Whoa... Just imagine… Everyone hopes that they will die peacefully in their sleep. She was doing her job that is expected of her, but imagine if she had been able to revive this 95 year old lady who had peacefully died in her sleep, and they managed to bring her to life again, with crushed ribs and a dead brain… Welcome back!”
— Welcome Back, Human
[View All]