Botswana to Namibia: Was I Cursed Today?

April 5
I am starting to have weird flashes of headaches and earaches.  These are things I never have in my life, ever.  Sometimes I have a weird nerve-jolt of pain go through my eyes for a nano-second.  I am wondering if this is a side effect of being on malaria medication for nearly four months straight?  I can not wait to get away from putting this medication garbage into me…

I am stiff to move lately.
I am going to attribute that to the amount of buses I have sat through in the past couple of weeks, and the terrible food I have been using for fuel that is probably barely better than not eating at all.  I am going to have to slow down soon and take a little bit of care of myself.  I need some Meevenings! 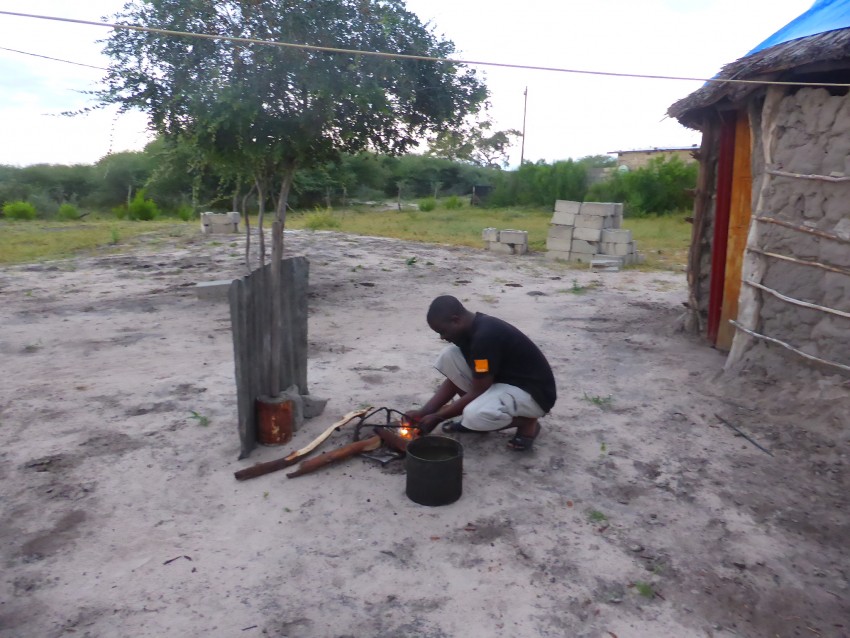 Andy, making a fire to heat water to ‘shower’ to start his day. I like his wind-break.

I heard Andy moving just after 06:00, so I got up and got ready.  I slept well last night.  Hippos groaning and growling not far from the house were the last sounds I heard before I fell asleep. 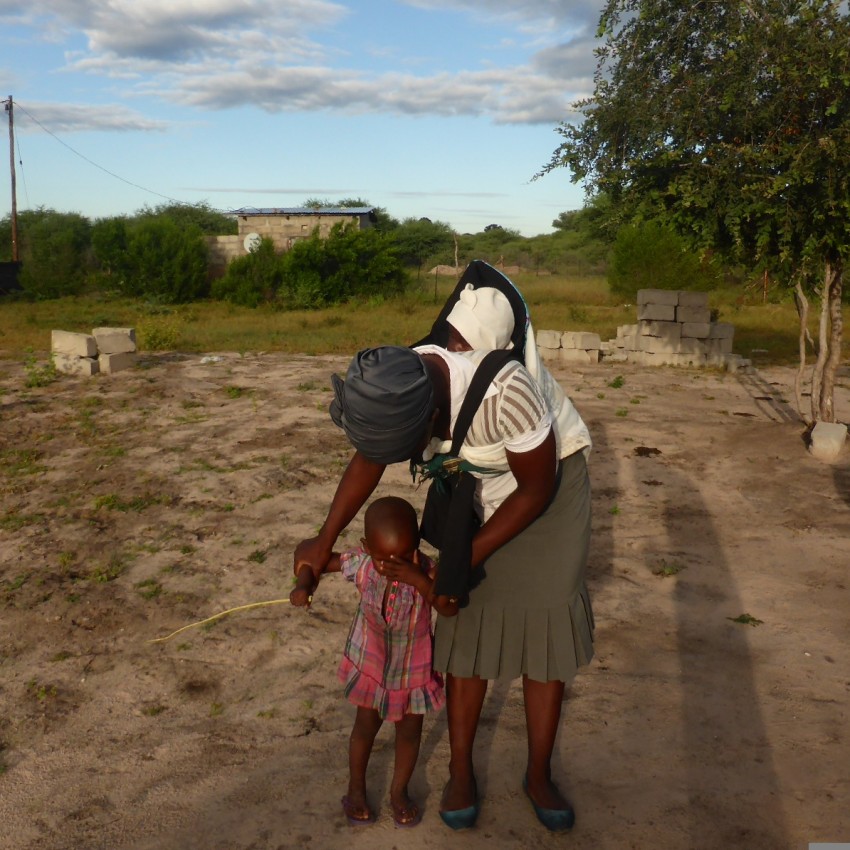 A neighbour of Andy’s who came to visit in the morning. Her little girl was terrified of me, and hid her eyes behind her hands. If she could not see me, I was not there!

Andy drove me to the border.  When I got out of his car, I handed him 140 pula ($12.40) that I had in cash and all of the coins that I could find in my pocket.  I thanked him for giving me a home last night.  He is a good man.  He wished me a safe journey and I headed for the border immigration.  ‘STAMP’ exit Botswana.  Walk 150 meters.  ‘STAMP’ enter Namibia.

I asked the Namibia immigration man if there was a bus that came to the border.  He said that one might, but that I should just wait for a ride from someone coming though.  The first village was 33 kilometers away and he told me the next real town was 200 kilometers past that.  He said, “Cars are scarce, but you can not walk from here as this is a game reserve and there are animals that will eat you.”  ‘Noted.  I shall just sit here then.’

There was an older man with a cane outside of the building, waiting for a ride as well.  I smiled at him, but we did not share a common language to communicate and become friends.  A car came along but they were heading into the park.  About 30 minutes later a semi came along.  The old man asked the driver about a ride…at least I assumed that was what he was asking (the no common language thing again).

I later asked the semi-driver about a ride myself.

As soon as we started on the road, the highway from the border turned into gravel on the Namibia side.  And it was a rough road.  My driver was hauling furniture in the two trailers behind our truck.  Namibia also felt immediately dirtier with garbage in the ditches, something I had not really noticed in Botswana. 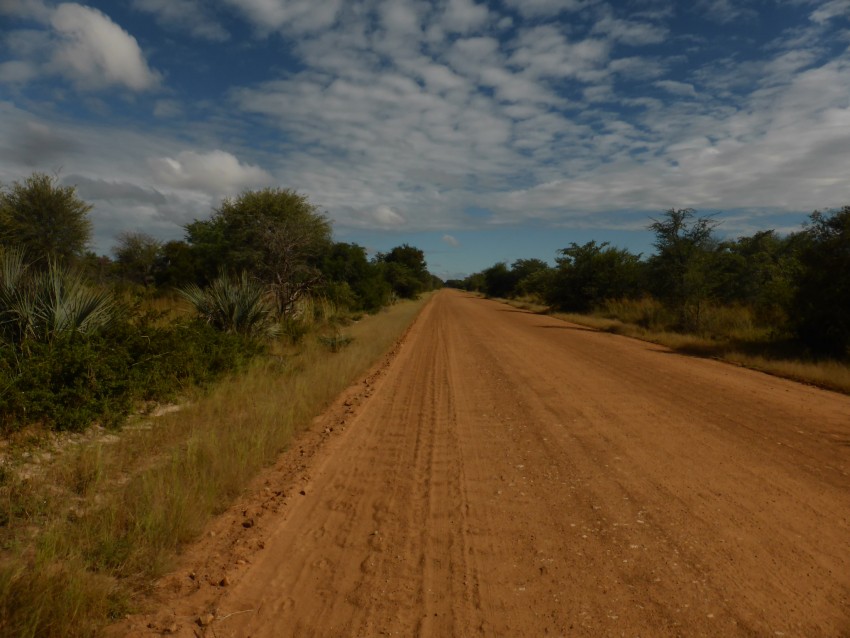 The road from the border in Namibia.

William, my truck driver friend from Swaziland, told me that the immigration people working at the Namibia border are uneducated.  He told me that they are just bush people who were offered government jobs.  Then William asked me if London is in the United States…

I was tired and I fell asleep for about 30 minutes on the drive.  William had to stop to get out of the truck because he was getting tired as well.  When he got back in I offered him some of my Czech Republic sniffing snuff.  I told him it would wake him up.  He was keen to try, so I had some first to show him how to consume it.  The rush went right to his William’s brain.  His eyes were wide open when he asked me how long it would last for.  He pointed at the container I had it in and said, “You must leave this one for me!”  I had created a monster!  I told him I could not give it to him, but I gave him some of the sniffing tobacco I got when I was in Tanzania.  He put it in a small container.  He seemed very happy to have met me. 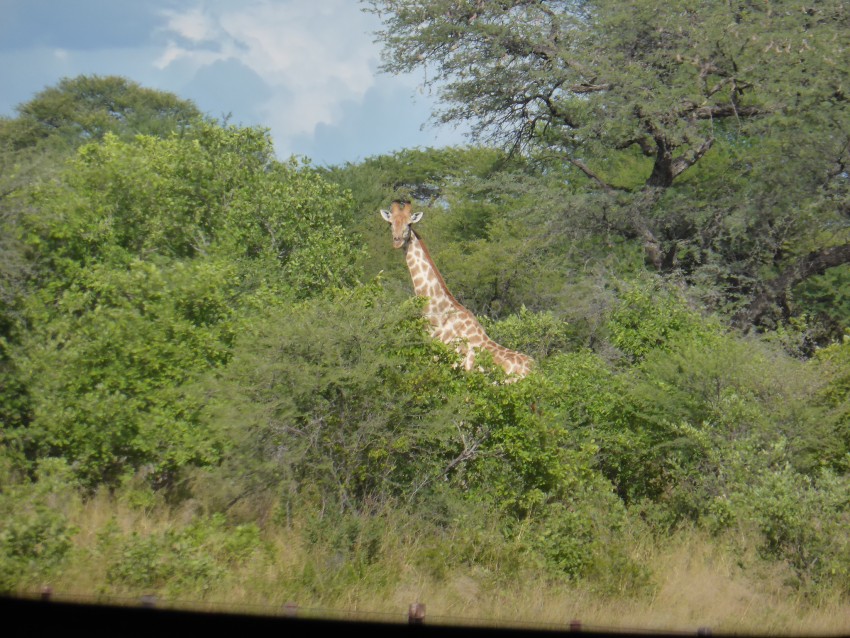 A casual giraffe on the side of the highway in Namibia.

I got out of William’s truck at Rundu and caught a ride immediately in a truck with Andreas who hauled me to Grootfontein.  From there I hitched a ride to a town called Tsumeb where I got a SIM card and went to look for a room for the night.  That is when the wheels came off for me. 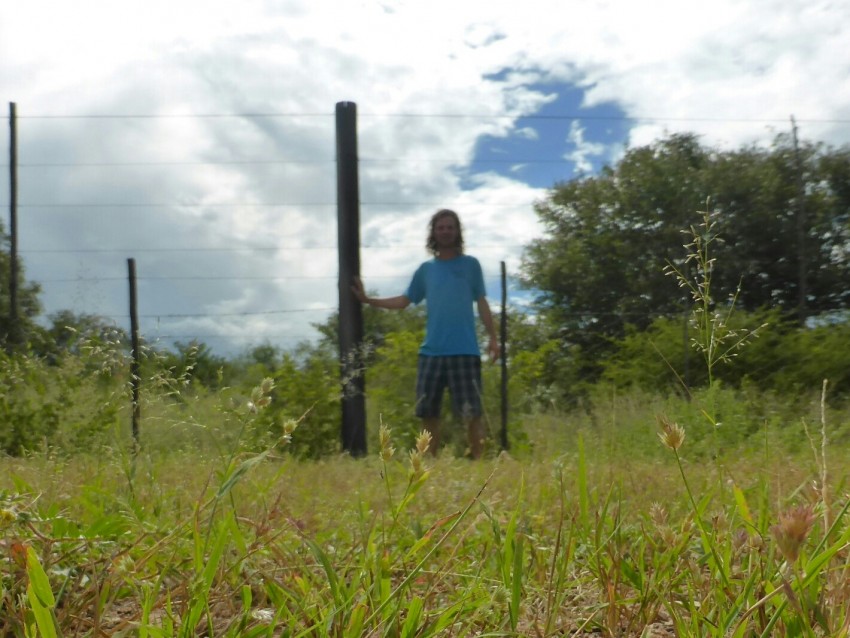 Look at that fence! It is the biggest non-prison fence I have ever laid my eyes on.

I decided that Tsumeb was giving me a bad hand and it was not a good town for me to stay in.  I headed for the taxi area so that I could get in a group taxi to take me the 65 kilometers back to Grootfontein.  In the meantime I went to eat the food from the shopping bag of groceries I had.  The buns were dry, the chocolate chip cookie was hard and when I went to take a big drink of the strawberry/banana juice container I had bought, the bitter force of grapefruit juice that I detest assaulted my tongue.  Ahh.  Such a rough go in such a short period.

Perhaps the older man at the Botswana/Namibia border sent out bad energy that had finally found me…  Was I cursed today?  My good-luck/safety potion necklace even broke this morning…

The man at the Meteor Inn desk told me it was the last room in the hotel, and it was air conditioned so it was going to cost me 430 Namibia rand ($28.30).  Fine.  What else was I going to do?  Then the man behind the counter told me how thirsty he was and asked me to buy him a beer.  I had just spent three times what I normally maximize myself on a room, and it had taken me three hours of hell with all of the walking, travelling between full town and pleading to find a place to stay.  I informed him that I was not having a very good day and told him to not make it any worse for me.  I walked to my room and went to bed to put this day behind me. 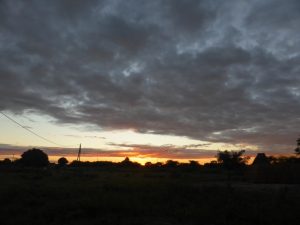 The sunrise from Andy’s house. 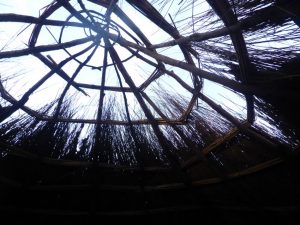 This is Andy’s rondavel. He said that ants have eaten the roof and it has caved in on him. 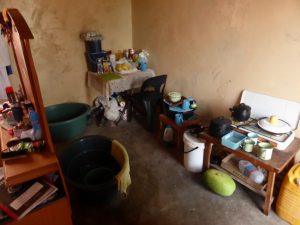 The kitchen in Andy’s shack. His was basins, one of which he used as a tub. 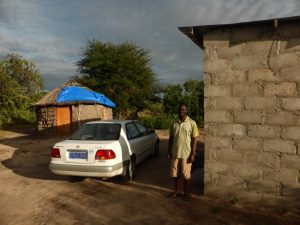 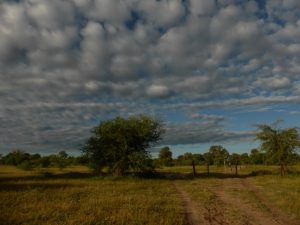 Driving from the village to the highway. 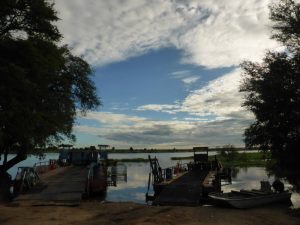 Ferries to take you across the Okavango River. 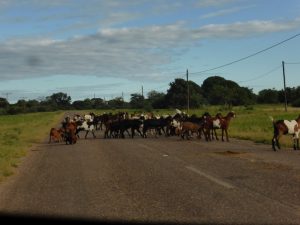 Goats who had been laying down and resting on the road. 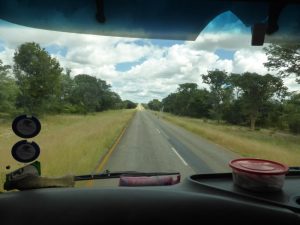 Heading out on the highway!

“Akbar, my telecommunications friend, lived in Afghanistan from October 2003 to June of 2008.  When he arrived in Afghanistan two years after 9/11 2001, he said that that Kabul, the capital city, was a lot of fun.  He told me that at that time, the city was cool and it was a party where he would be out until 3:00 or 4:00 in the morning.  Kabul stayed fun until 2007 and that was when things got really bad.  Akbar said you would not want to be there today.  It is fascinating that the capital city functioned as normal for 6 years after 9/11 took place. That is conspiracy material type of information!”
— Akbar from India
[View All]