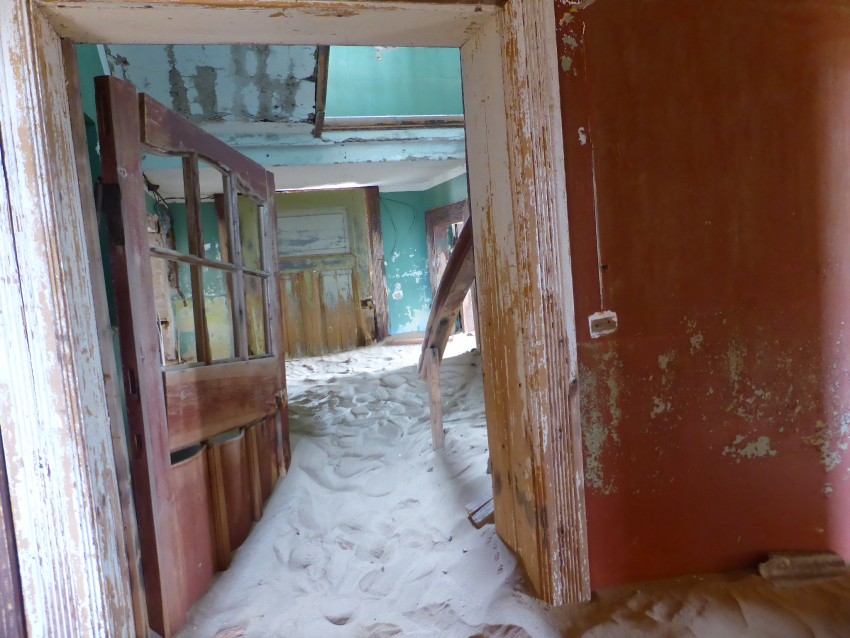 A visually fascinating shell of a town.

April 20
I got lucky this morning.  I wanted to go to Kolmanskop, the site of the original Diaz Cross Ghost Mining Town, but there is no access to the place without one’s own transport.  I was going to have to hire a taxi to take me there and then wait for me for 100 Namibian dollars ($7.05).  That is not much money for an 11 kilometer drive and a driver that will wait one hour for you to be a tourist. But not having to pay 100 Namibian dollars, because a couple from the Lüderitz Backpackers will take you because they are going there as well, is way better! 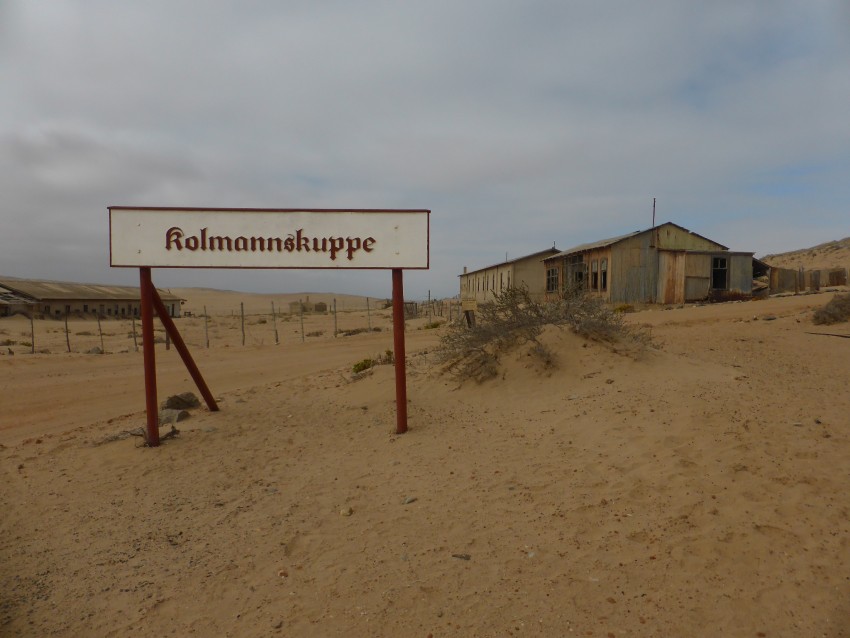 The site of the original Diaz Cross Ghost Mining Town.

We arrived at the abandoned town site just after 08:30 and paid 85 Namibian dollars ($6.00) to get through the gate as I ate biltong for breakfast (the southern Africa answer to beef jerky) in the back seat of the car.  We were free for an hour to look around the empty sand filled with shells of a former town until 09:30 when the tour would commence. 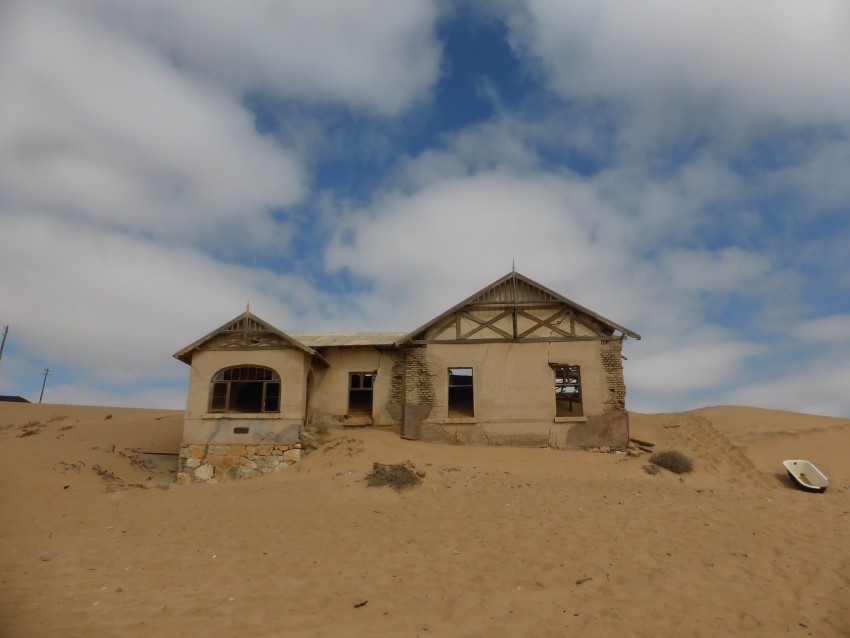 The iconic photo of the Kolmanskop school-teachers’ house. 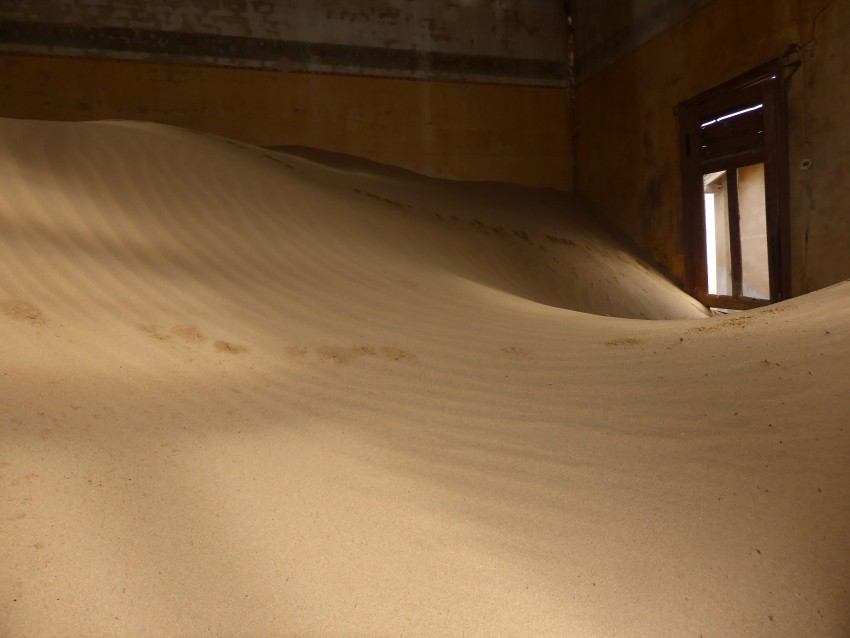 It all began here in 1883 when the Germans arrived in search of copper.  In 1908, railway inspector August Stauch, who had told his employees to keep their eyes out for pretty stones, was presented with a beautiful stone by one of his workers.  With a keen eye, Stauch realized that he had been presented with a diamond.  Suspecting that there were more in the area, and in a stealthy move without telling the government about his discovery, he purchased the land where the diamond had been found.

Quotes from the wall of the museum…
The Rush.
In a short time prospectors pegged claims covering nearly the whole coast from Conception Bay to Marmora in the south. It became clear that Stauch’s discovery was not a localised deposit, but part of a series which formed a vast diamondfield. Towards sunset one day in 1909, Stauch himself was to discover, with Professor R Scheibe, the fabulous valley named Idatal. Here desert winds had laid bare gravels so rich in diamonds that, after nightfall, men on their hands and knees were able to gather gems glinting in the moonlight.

In seven years after the discovery of diamonds, the South West African mines produced 5,369,814 carats (1073 kilograms). 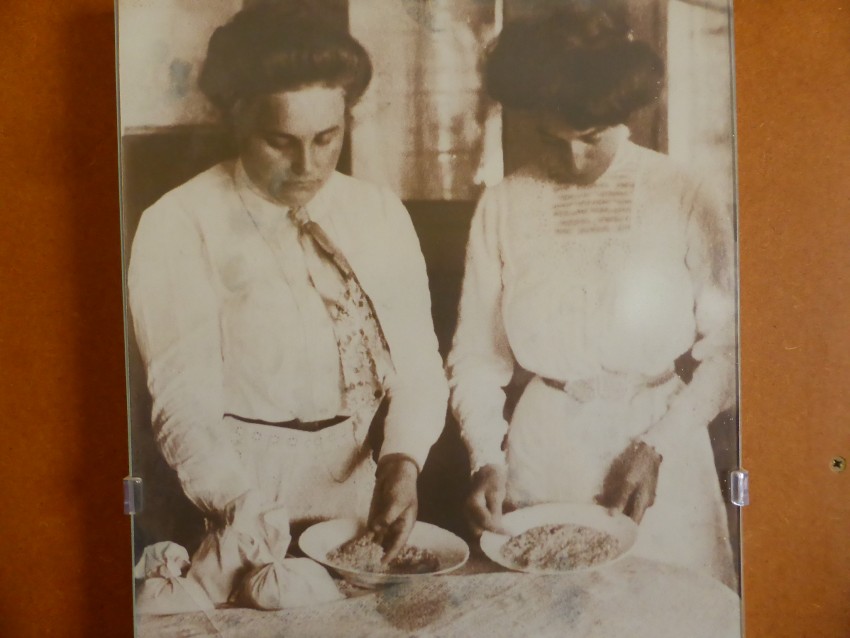 By 1911 August Stauch had become a tycoon, always on the move, while his wife Ida on a visit to South West Africa stayed behind to count the diamonds.

With 300 German adults and 44 children in their own school, the town was under way. An additional 800 local workers were involved in the mining.  The town had electricity as early as 1911.  There was a bowling alley in town to keep the men entertained.  There was a recreation club for dances, concerts and gymnastics.  A six-mule drawn train passed through the streets of the town delivering 20 liters of water and a block of ice (made in the town with the help of electricity) to each house in the desert town for free.  The currency in the Kolemanskop was diamonds which was how people paid for goods in the stores. 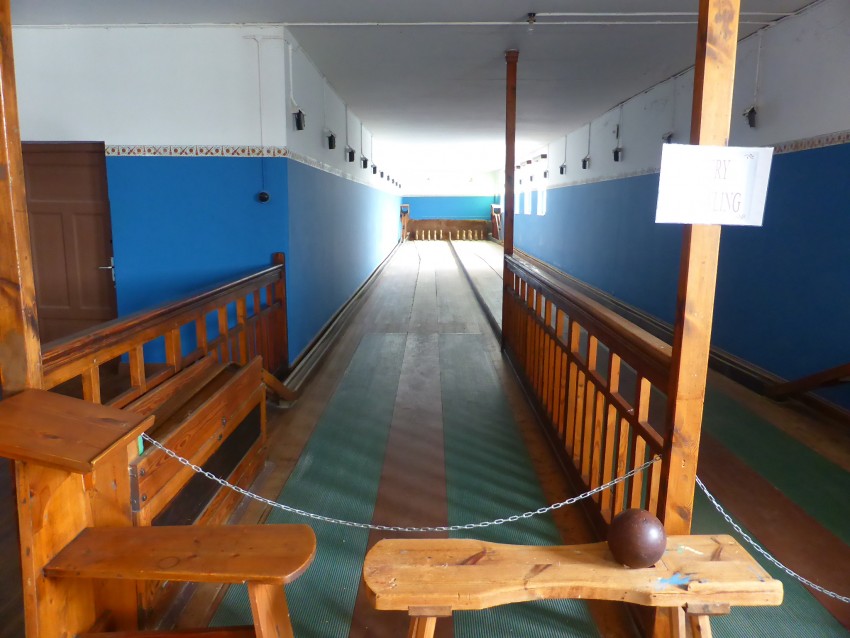 According to legend, the shopkeeper was a woman who very few people know anything about, but she is said to be one of the only people to have made it back to Germany after the boom busted with the fortunes she had made.  Stauch had lost everything he had and the workers had spent everything they had on large living (easy come-easy go.  The story reminded me of oilfield workers I have known who have dumped their fortunes ‘on cocaine and hookers, the rest was wasted’ as the expression goes).

Kolmanskop eventually ended and dried up as diamonds an average of twice the size were discovered at Oranjemund in 1928.

In 1938, the town of Kolmanskop moved to Oranjemund.  Stauch eventually ended up with stomach cancer and returned to Germany where he died in poverty, losing his fortune during the dirty 1930’s.  By 1956, the last of the inhabitants of Kolemanskop moved out of town and nature completely moved back in. 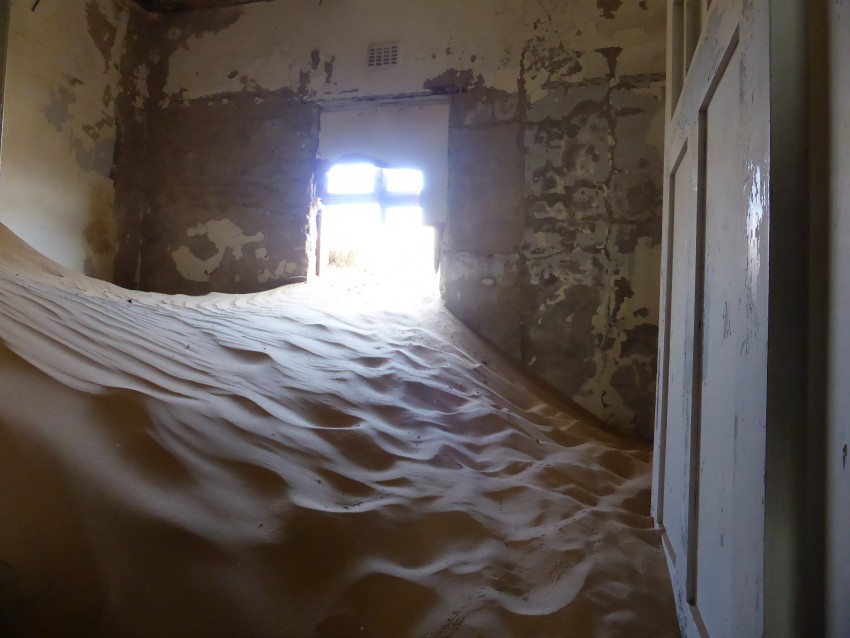 There was a section in the museum devoted to mine workers attempting to smuggle out diamonds.  There were some very interesting ideas such as attaching them to a crossbow and shooting the bow bolts out of the mining area.  There were less glamorous techniques such as smuggling them out in packets, rectally.  The idea below, however, is very clever and is by far my favorite:
(taken from a quote in the museum):

Pigeons
Since 1990, security staff detected a number of cases, where people made use of normal homing pigeons to smuggle diamonds from the mining area.

This is not a new method; hence, the ban on keeping of pigeons at some of the other diamond mines as well. In nearly all of these cases, greed played a major role.
Parcels of diamonds attached to the pigeons, weighed them down and made them tired before they could reach their destinations. Once detected, the security staff only had to revive the pigeons and then allow it to fly straight to his owners waiting hands. In some cases, months of covert operations were required to eventually catch some of the culprits. Two methods are used to attach diamonds to the pigeons and one is a cleverly designed harness, which fits on the back of the pigeon. Straps attached it to the body of the pigeon without negatively affecting his flight.

The second method is a quick fix of attaching a small parcel to the leg of the pigeon with normal insulation or masking tape. All the owners then had to do was to wait for the pigeon to come home after being released in the mining area. These thieves normally worked in pairs with one loading the parcel and releasing the pigeon in the mining area while the owner or the pigeon awaits the arrival at the loft.

Between 1990 and 2007, a total of 478 objects with a total mass of 385 carats have been recovered from ‘pigeon’ cases.  The keeping of pigeons in Oranjemund was banned and will be banned until such time that diamond mining cease in the area.

Information received from informants also played a major role in some of the cases in which case handsome rewards were paid out to the individual reporting.

I hitchhiked my way back to Lüderitz, washed my clothes and stayed pretty close to the backpacker guesthouse for the rest of the evening, drinking a couple of beers in the kitchen with other tourists. 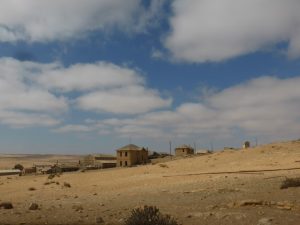 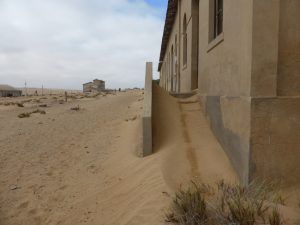 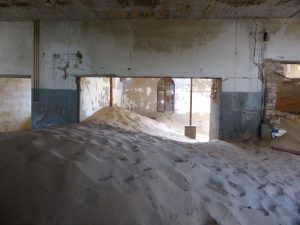 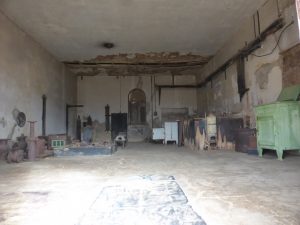 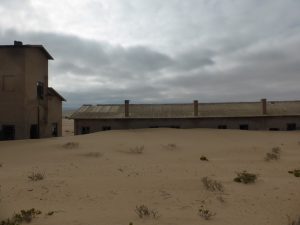 It reminds me of the winter snowbanks up against the house that I grew up with. 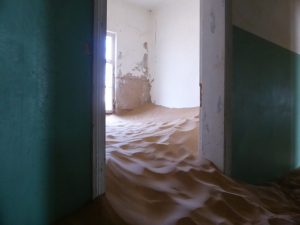 ‘Here is your new beach…in your house!’ 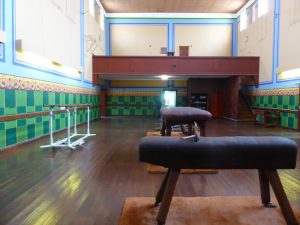 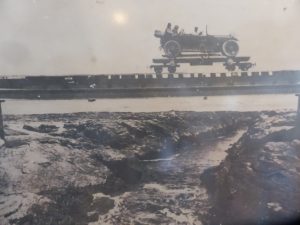 My favorite photo in the gallery. 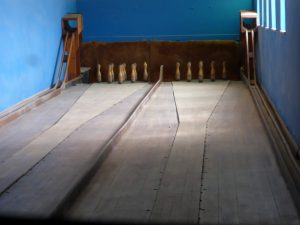 Those are precise and unique bowling lanes. A man stood at the end of this to set up the pins. 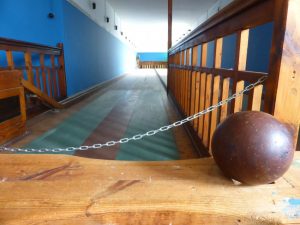 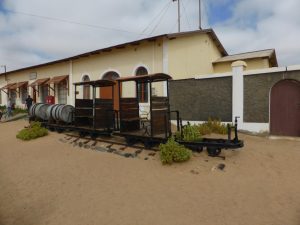 A six-mule drawn train the delivered water and ice to all of the houses in the town. 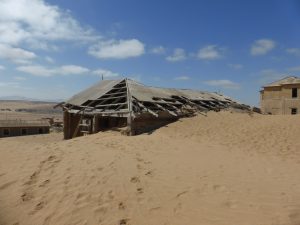 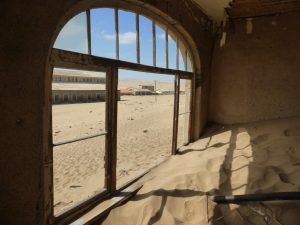 This greedy house, trying to store the sand. 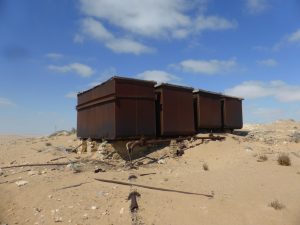 Water storage in the desert to supply the town. 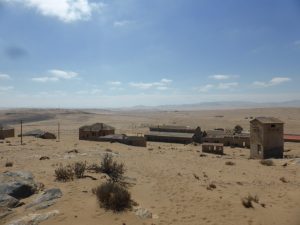 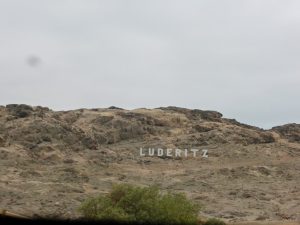 Lüderitz not to be confused with Hollywood. 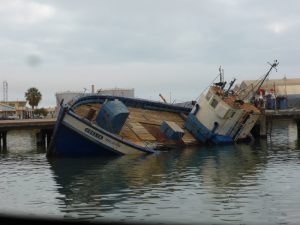 Better times in the past. 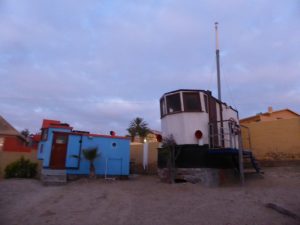 The double-rooms at the Lüderitz Backpackers.

“I went to help my friend out at a food stall for the afternoon and had a blast talking to people and being witty.  I had two older women who were batting about who was going to pay for food and one was trying to shove money into the other’s pockets.  I said, “Ladies, you can just give it to me if you like and save the fight.”  One of the women asked, “Do you come with it?” I responded, “Well, that depends…  Where is your husband?”  They liked that.”
— Edinburgh, Scotland.
[View All]