April 22
I was up at 05:30 to get to the Fish River Canyon viewpoint before sunrise.  On the drive, a herd of zebras ran across the small roadway in front of me.  Africa is special…

The Fish River Canyon is the second biggest canyon in the world after the Grand Canyon in Arizona.  I now have seen them both and Fish River is equally beautiful.  The colors are magnificent.  And the depth of the canyon, cut by the river…incredible.  Layers of different colors of rock give a timeline of the erosion.  The water levels are low, but the canyon itself is truly amazing. 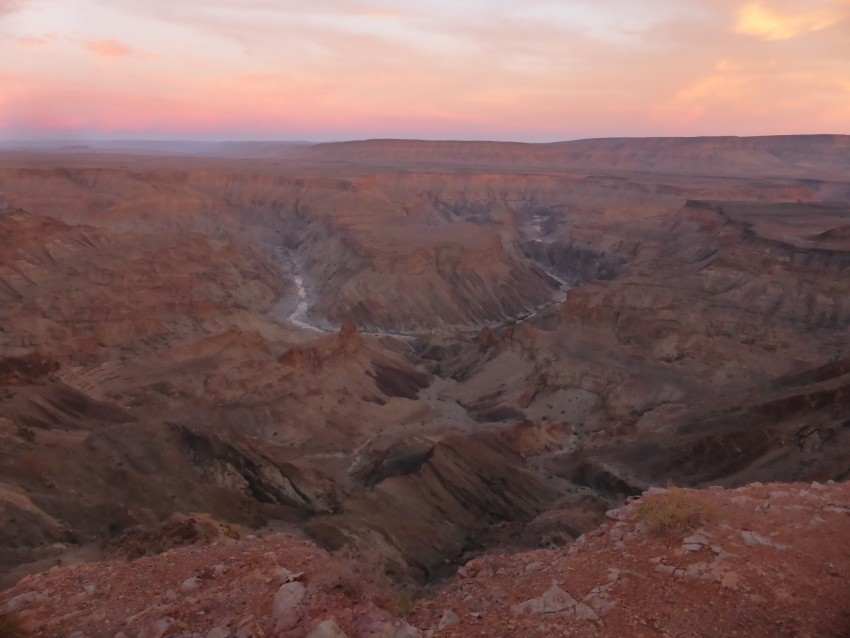 Fish River Canyon as the sun was rising to adjust the colors. 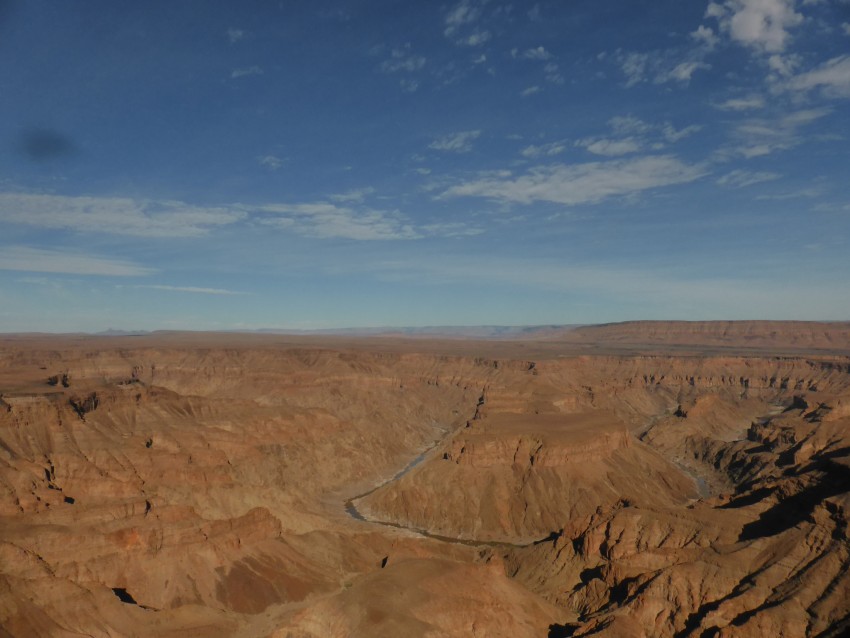 The water lever of Fish River Canyon is low, but you sure can see the erosion timeline.

There is no one around.  If you want a vacation where you can get away from it all and see beautiful things, come to Namibia.  There were two people in the campground 10 kilometers from Fish River Canyon last night.  Today, there were two different cars at the canyon while I was there over a three hour stretch.  It is ‘yours’ here and it is great to feel that.

I drove along the edge of the canyon where I was completely alone.  There I spent about 10 minutes screaming out different words, phrases, and making wishes to incredible canyon echoes of me answering me.  I yelled words until my voice started to crack.  It is nice to feel so free and be in a situation where you can vocalize the crazy things in your mind that would normally make society uncomfortable…and you can do it at your loudest possible volume.  I sort of hope that there were people hiking way below in the canyon listening to me.

That whole experience made me wonder how well sound travels.  It goes to the other side of the canyon, which is kilometers away, and comes back with an average ‘Africa to North America Skype call’ delay.  But, does it travel downwards as well?  Would people in the bottom of the canyon hear me as well?  Would the people on the other side hear the same volume of audio as I could hear on my own echo return?  I wished I had two clones and some walkie-talkie’s (what a word, clearly invented by a genius!) that I could have strategically placed – making them do the hard work of crossing the canyon and climbing down the canyon – so I could have tested where my yells were going with them.  And, if they were clones, they would understand what I was talking about in my crazy yells.  The problem with them being clones though, is that they might have used the same charming tactics on me to get me to go to the other side of the canyon or to crawl into the canyon to yell yells at me instead…. 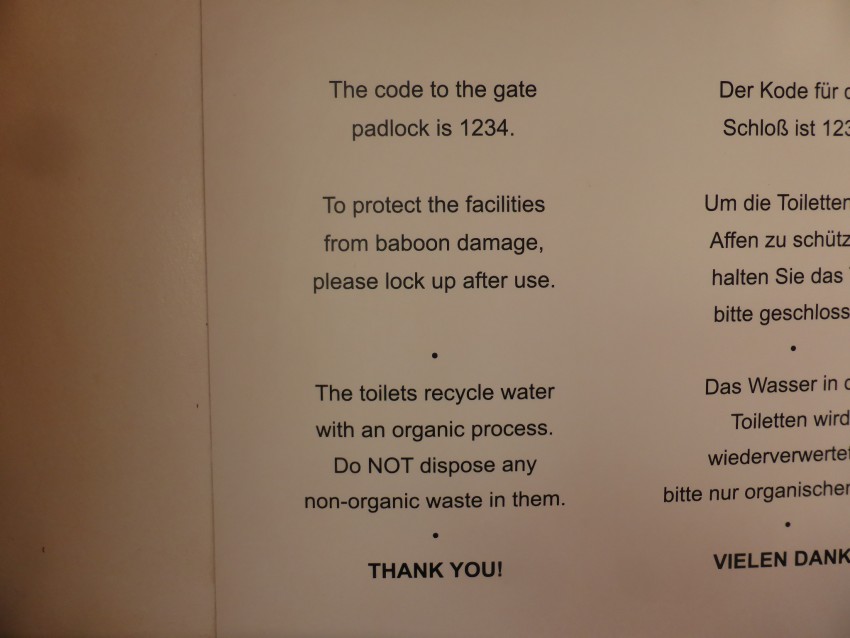 When the baboons learn to read, these toilets are doomed!

When I left Fish River Canyon, I drove to Ai Ais where the hot springs are.  According to my friend Charlie from last night, Ai Ais is named so because of the sound that you make when you touch something hot (‘Ai yi yi!’).  As I arrived, my excellent Dutch friends from last night were there already.  They were two of about 10 people at the entire, beautiful, hot springs resort.  Where is everyone?

I spent the rest of the morning with them and then as we went for lunch, GPS told me that I had a 3:45h drive ahead of me to get back to Keetmanshoop.  That cut out lunch time.  So, I made my goodbyes to a really cool older couple of and went to head out of the park.  A guy hitchhiking was waiting by the gate and asked me where I was going.  “Keetmanshoop!  You?”  He was as well so I told him to jump in.  I have been hitchhiking all over this country.  Kama says to pay it back. 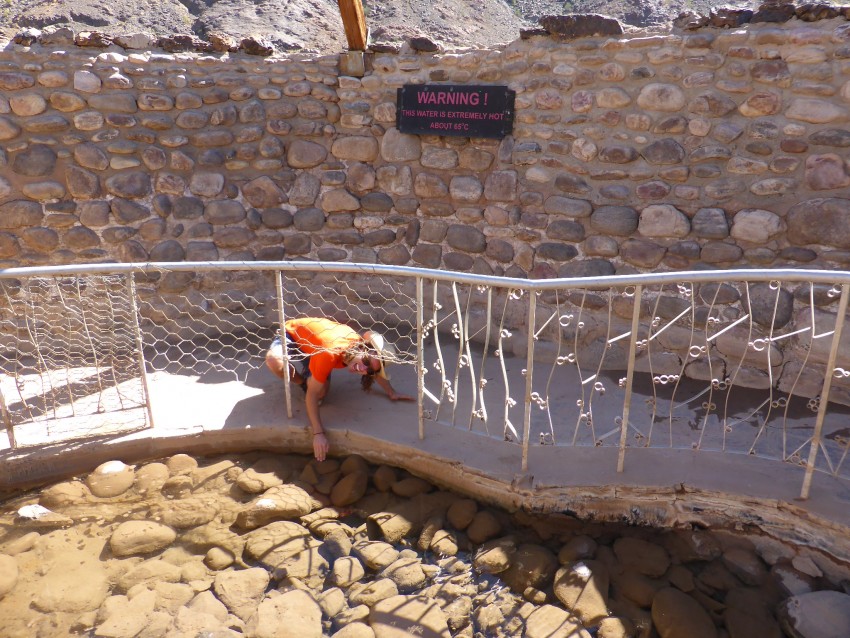 Afraid I was going to be late to return my rental-truck, I drove freaking fast for the 260 kilometers back to Keetmanshoop from the Ai Ais hot springs.  Before I left, everyone told me to go around on the highway instead of taking the gravel roads, but the highway would have tacked on at least another 60 kilometers, and I grew up on gravel roads everyone seems to be afraid of.  My hitchhiker, Godwin, even remarked that I was really good at driving on gravel, so I gather I was kicking ass at high speeds… 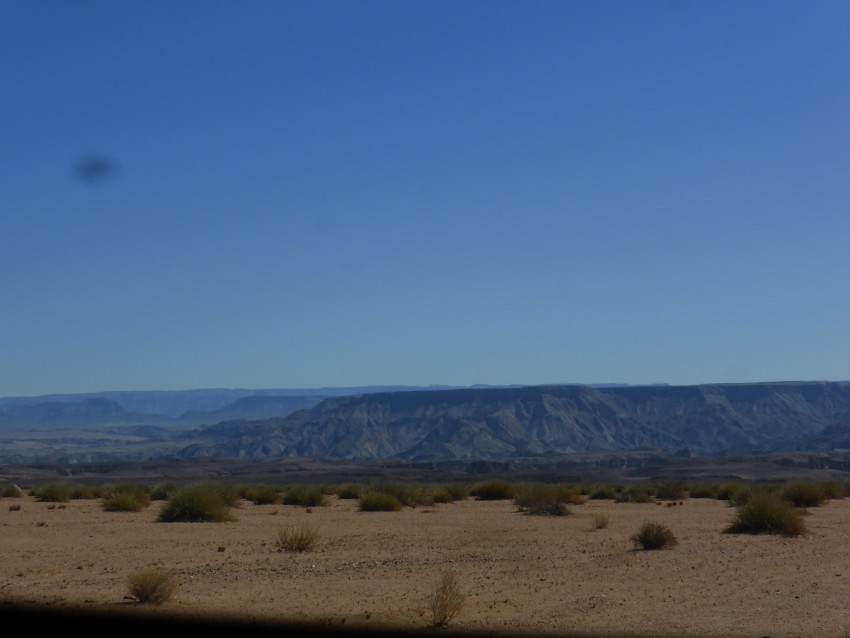 Heading out of the Fish River Canyon.

I did that GPS timed 3:45h drive in 2:10h.  It was not because I was driving 160 km/h, but rather because I was not driving the 60 km/h that was posted for much of the road.  Better late than never (and better late than pregnant!) but I was none of any of them and had my rent-a-truck back to my friend Aubrey at Linxano Rentals with time to spare. 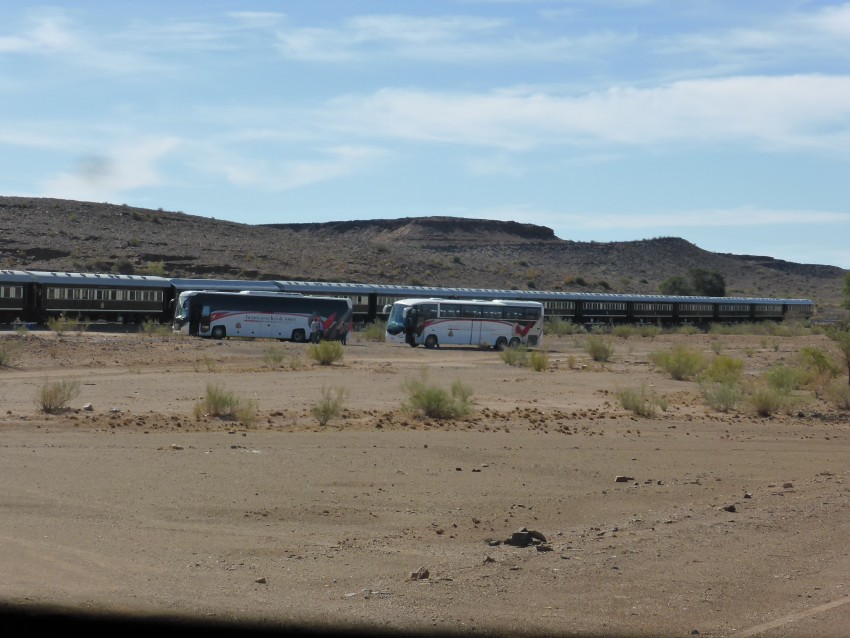 I am not sure, did the train break down or is this where the buses deliver passengers?

‘Bragging the Cars’ = Aubrey’s expression for driving erratically around corners and showing off.
Aubrey turned out to be even cooler than I thought he was yesterday, so I asked him if he wanted to hang out with me.  He drove me to find a 549 Namibian dollars ($38.11) bus ticket and it turned out that the bus to Capetown was leaving tonight and would not be doing that again for another two days.  I acted fast and bought a ticket.  I took Aubrey out for lunch and then we dropped off a dead dog at the dump.  When I woke up this morning, I would have never expected that later in the day I would be dropping off a dead dog at a dump in Keetmanshoop.  Life is a constant adventure… 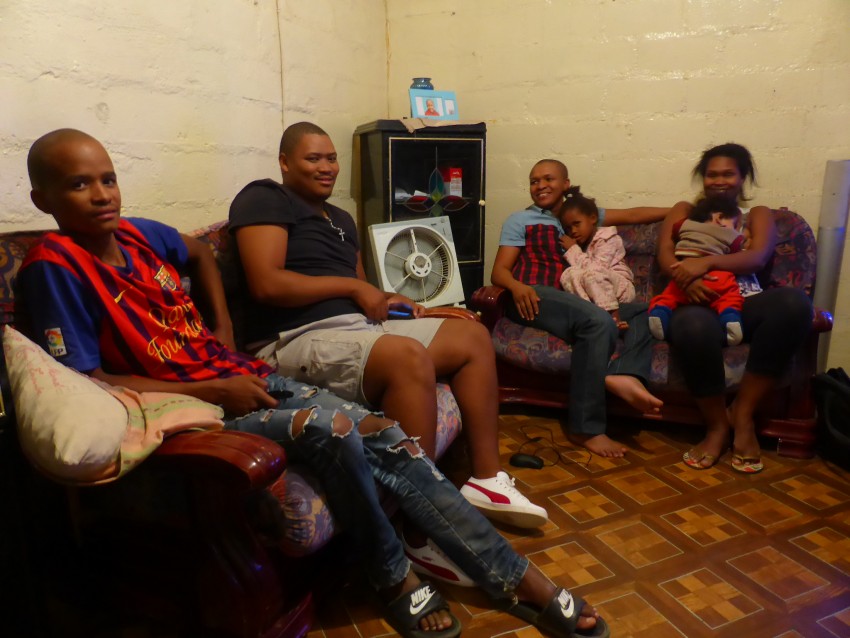 Hanging out at Aubrey’s house.

I would spent the evening at Aubrey’s house with his girlfriend and their two little girls.  I just keep on meeting wonderful people and I have to fly out of here in eight days…  Africa is constantly a land of unselfish acts of kindness.  North Americans and Europeans are lands of nice people, but I feel like people there help you out because it makes them feel better about themselves.  It seems like in Africa, the people help you out because they are genuinely happier if you are happier.  People here are much more selfless.  Perhaps that is a proper definition of affluence.

Two of Aubrey’s friends came over to spend time at the house.  Aubrey, his girlfriend and their two friends tried to teach me click words from their local ‘Nama’ language.  That was fun!

Aubrey’s girlfriend has a relative in Canada.  Aubrey told me, “She went to Canada a man.  Changed into a woman.  Had the surgery for a vagina.  Now, is very difficult to get back because is a different gender.”  If is funny to hear Africans speak of such things!

Aubrey, his two friends, and our taxi-driving friend Shu Shu, took me to a bar and then to a nightclub while we were waiting for my 23:50 bus.  I told them crazy stories about women and parties that they really enjoyed.  As we were leaving the nightclub, a woman came chasing after me and came all the way to the car after me.  Oh that made those guys laugh.  She kept on saying, “Shu Shu!” to me, which is the name of our friend, but also the Nama word for ‘Hot!’  She wanted some of my beer, but I just wanted to escape as I was getting out of town anyhow.  I was having a hard time getting away from her as she kept on blocking my way, so I had to run away and dive into the back seat of the car to flee.  My friends were giggling the whole time. 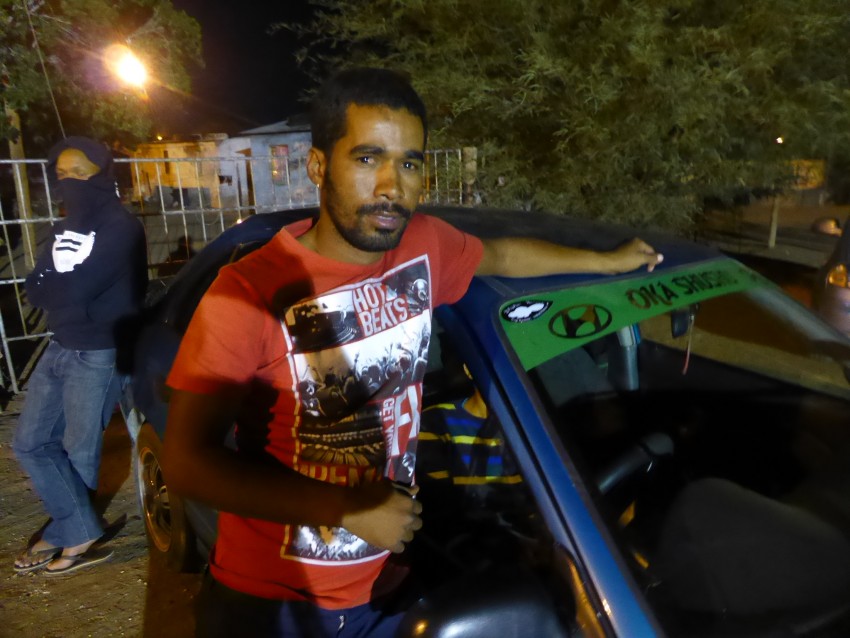 Shu Shu dropped me off at the fuel station where I was to catch my bus for Capetown.  A 15 hour bus ride…Yay!  Not only was the bus that was coming from Windhoek actually on time, but we even left early.  It had incredible reclining sleeper seats that I woke up in at the Namibia/South Africa border.  ‘Stamp’, goodbye Namibia.  ‘Stamp’, hello South Africa. To get into South Africa at this border, each of us from the bus was taken into a solitary room where our hand-bags were individually searched in front of us.  I have never crossed into a country before where every person lined up to get into a single room for a searching.  I try not to stereotype the country to the rumours and stories I have heard, but South Africa makes me uncomfortable… 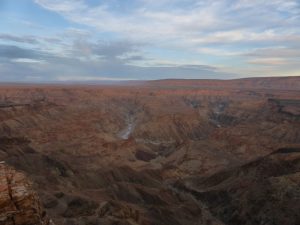 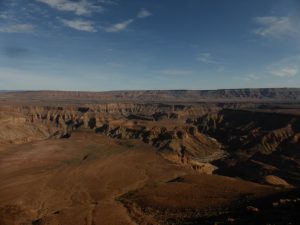 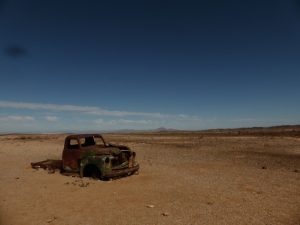 Desolation, what Namibia will always feel like to me. 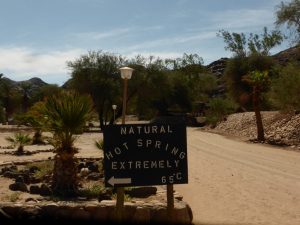 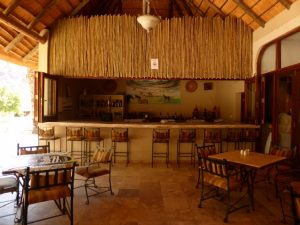 No one here at the Ai Ais hot springs. 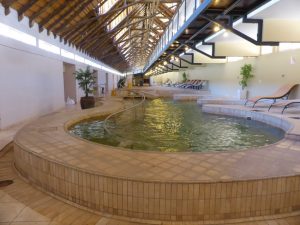 No one here in the Ai Ais hot springs spa. 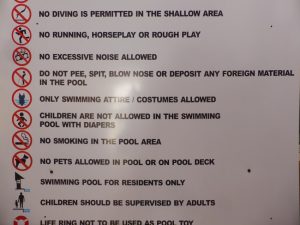 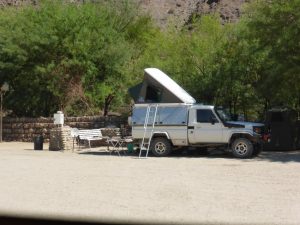 The very essence of a lousy traveller…transportable satellite dish set up at one of the most beautiful places on earth. This guy can’t miss an episode re-run of Friends.

“According to present-day indigenous groups, gold is the fertilizing energy of the Sun Father, while lakes are the womb on Earth Mother.  When the gilded chieftain threw gold and offerings into the water from the raft, he was making a pact with nature for life to be renewed.”
— The Offering Raft (Museo del Oro in Bogota)
[View All]