April 16
The ‘Walvis’ of Walvis Bay is ‘whale’ in Afrikaans.  Awesome…

I went for a walk around Walvis Bay in an attempt to try to find a tent.  I failed in the tent quest, but really came out ahead because I stopped at a business called Namib Off-Road, that was closed. There was a sign on the door that explained their closure was due to a 4×4 Desert Challenge behind Dune 7.  I asked a cabbie where Dune 7 was.  He told me it was about 12 kilometers from Walvis Bay.  Solid! 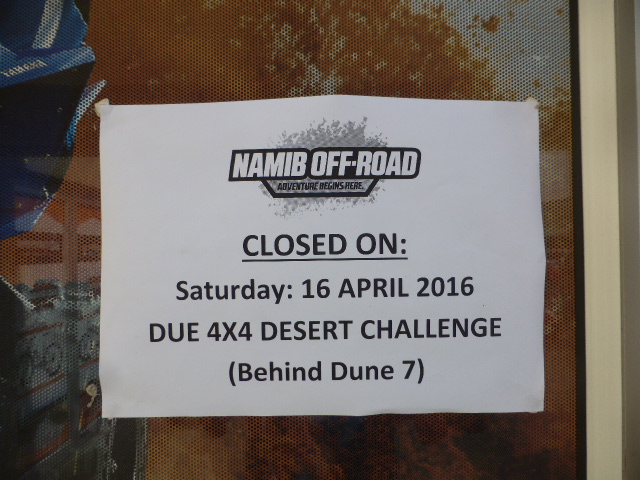 I spent 40 Namibian dollars (just under $3) to cab to that very Dune 7, which turned out to be an off-road sport business in the middle of the desert.  I asked the business where the off-road challenge was.  Someone pointed into the dunes and said, “That way.”  I asked if I could walk.  Apprehensively, someone said I could.  I had a 1.5 liter water bottle in my hand and I set off not knowing what I would find.

Well, sometimes you do not even mean to go fishing and you end up catching the biggest one.  That is kind of how it happened today.

I was just walking and following vehicle tracks.  I could see they were going behind some massive mounds of sand, but I had no idea where they were leading me.  After about 1.5 km, into view came a group of people and cars.  Bingo! 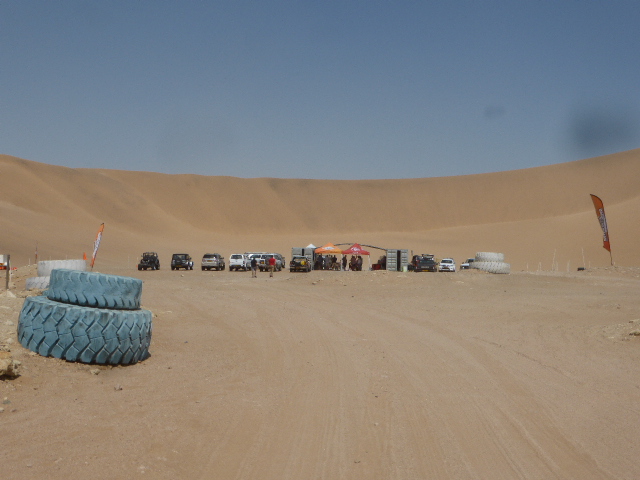 I would later find out that people were blown away to see a guy (this guy) walking though the desert towards them.  One of the guys said he saw me and said to his friend, “Who is that guy walking?  He is going to die out here…”  Someone else later told me, “We saw this guy with long hair, nice teeth, who was skinny, and we wondered, ‘Who is this guy.’  You can see that your hair is different from us.  And how are your teeth so white?  You said you’re a freelancer?  We have real jobs and our teeth are not so white.  How are your teeth so white?”

As I was walking towards the small gathering, there were two shipping containers set up with a shade between them to hide from the giant ogre in the sky.  That was where the crowd was standing…shading.  One of the containers was selling beer (that was the one I got to know best) and the other was selling food.  The beer was a nice treat because the weather was blasphemously hot.  The sun was shining so hard that the sand was at temperatures possibly only two or three degrees from making glass.  I was in flip flops and it burned my feet red to touch it.  It was unbearable.  So, the shade was certainly a relief.  I was busy chancing that the beer I was dumping inside of my body would help to cool the rest of me from the inside out.

In Namibia, a pick-up truck is called a ‘buggy.’  Just think about that for a second.  That means this word has not changed since it was just that and has evolved in meaning with the vehicle!  Very cool.

I made friends right away with a man named Jaco, who takes out hunting expeditions though Tanzania.  (For the record, it will cost you $16,000 to shoot a buffalo.  A lion will cost you over $100,000.)  Jaco introduced me to Johan who had a vehicle entered in the 4×4 challenge.  I got in the truck with those guys for a great experience.   Johan took us on a dune drive where we climbed for the dune tops and then raced across the mounds.  Today was a typical Saturday for those guys in a giant playground of sand. 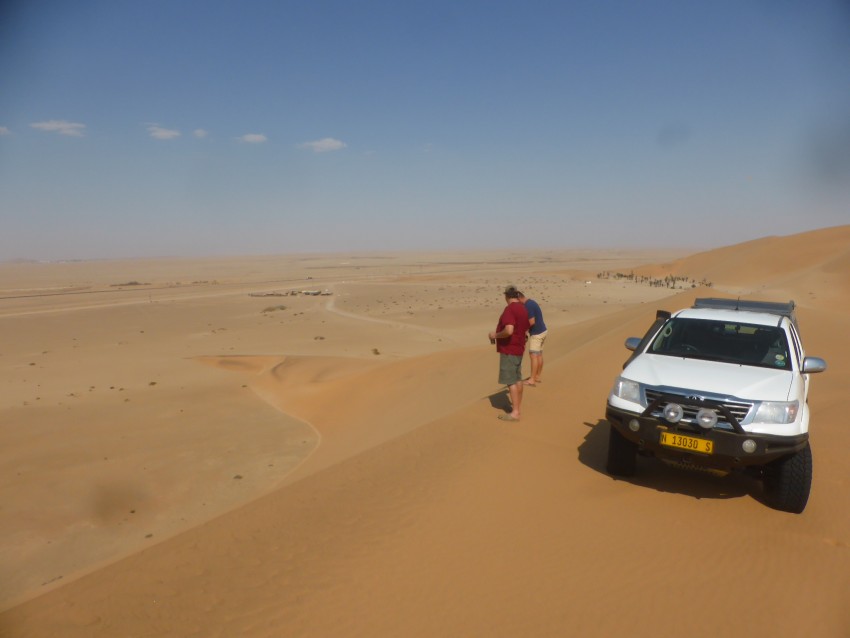 Back at the 4×4 gathering, we had eight different challenges to get through:
#1 – reversing through poles 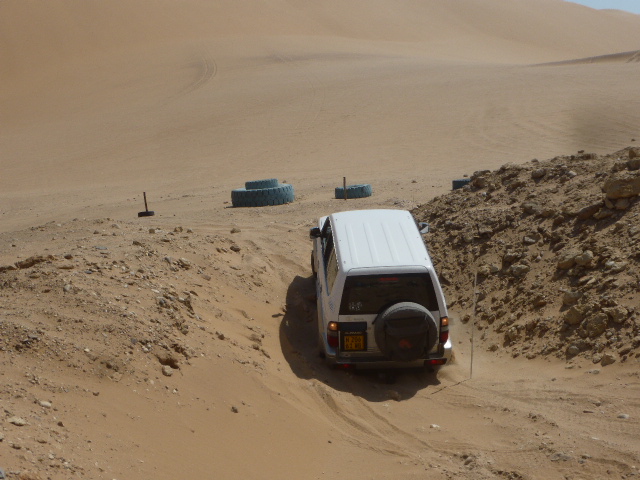 #2 – driving down through a rough cavern and around poles with the co-pilot holding a measuring cup full of water. 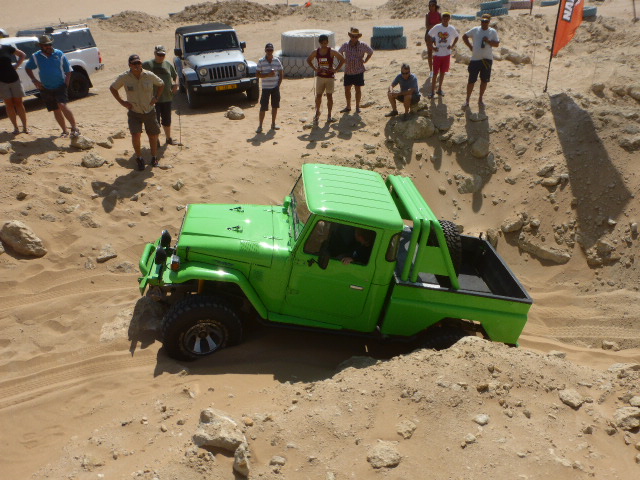 #3 – trying to get through a deep hole full of very soft sand. 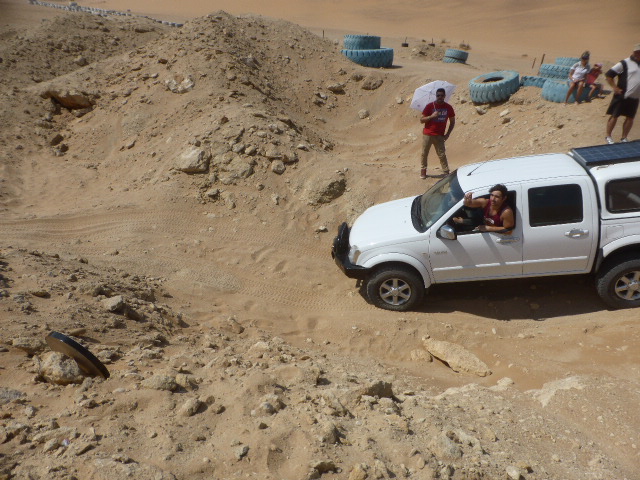 #4 – driving through a rough terrain while the co-pilot threw a dart from the passenger seat at a board on a mound. 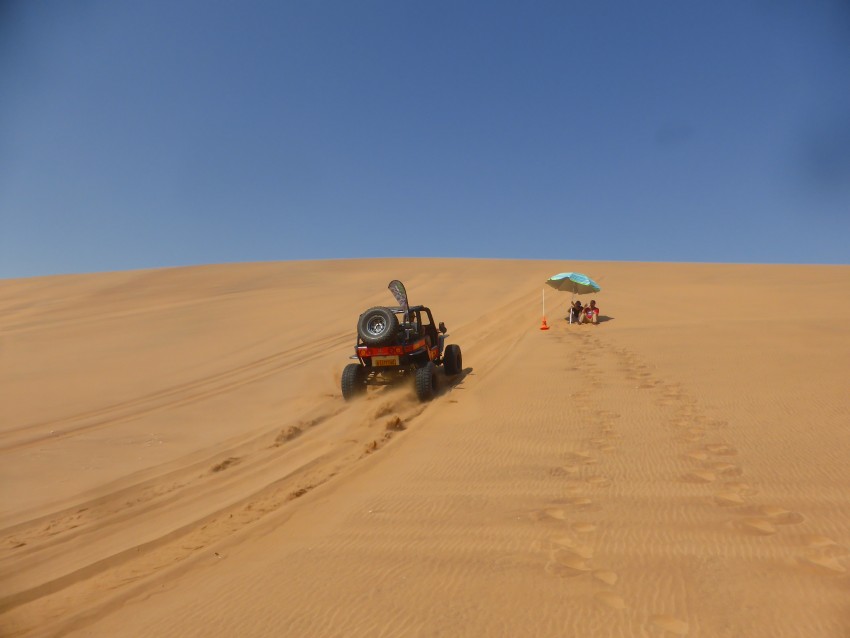 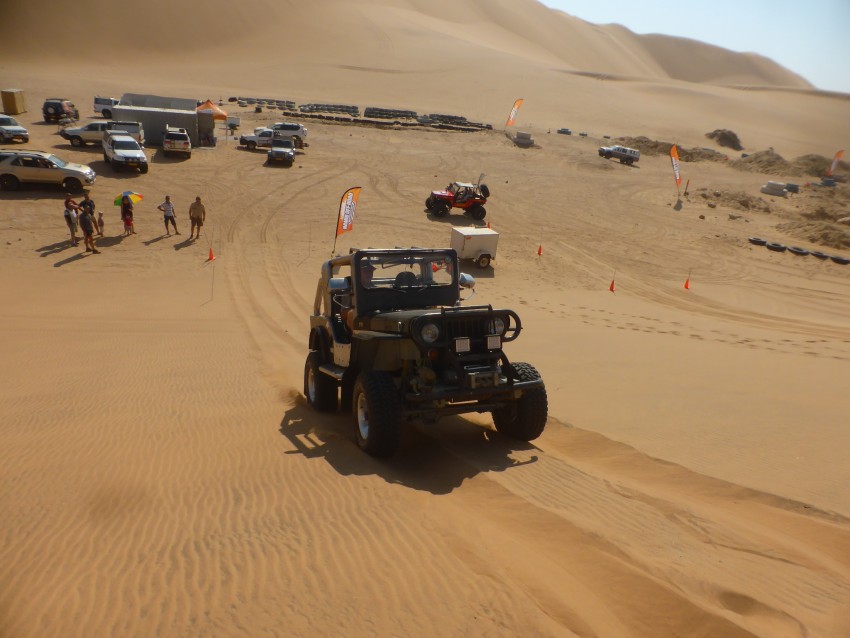 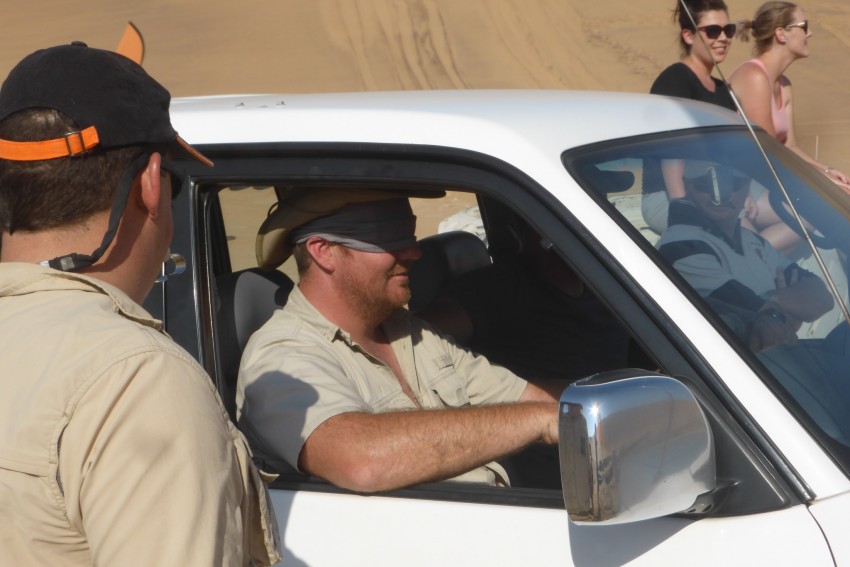 #8 – rough terrain with the driver blindfolded while the passenger guided him (I did this with a gentleman, instructing him. Heavy pressure!)

Well, I had lucked out today and found a group of really nice locals.  It was a great day of drinking beer in the desert with locals and fantastic stories from them.  As Johan explained me, “And then the guys, they drink a lot, get the testosterone, and then fuck up their cars.”  The people were fascinated to meet and hang out with me.  It was a wonderful little community of off-road friends who know each other well.  Some had factory vehicles.  Some had modified vehicles they had built themselves.

One guy had a 1982 FJ 45 Toyota Land Cruiser with a 351 Ford Cleveland engine.  He said that there is a man in South Africa who builds conversions to go between the torque plates and the engines to match everything up between the factory drive-trains to the aftermarket motors.  Another guy had a 1945 Willy’s Jeep with a 5.0 L Mustang engine. 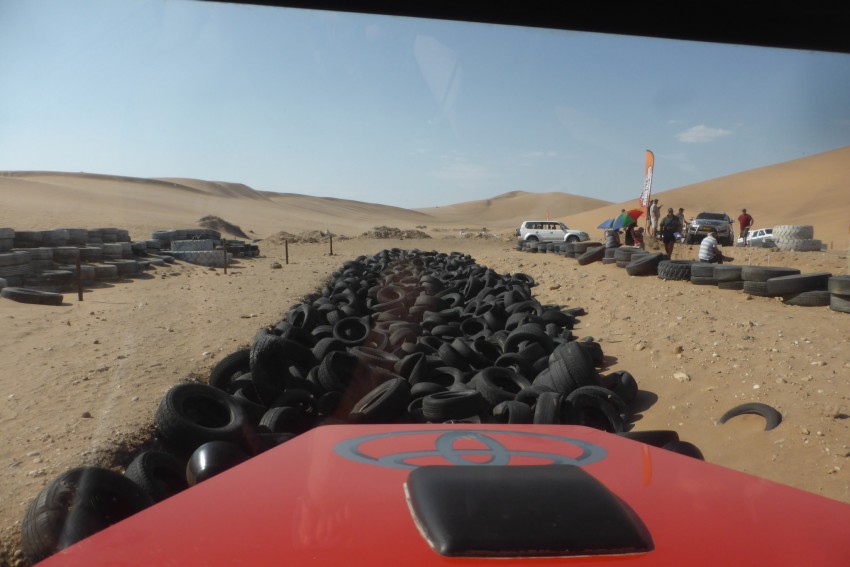 You can drive across anything in this machine!

After the challenge was finished, I had become really good friends with a guy named Philip, who took me under his wing to show me his local life in Walvis Bay.  We went a local watering hole that he and his friends frequent when they go out.  Philip was a super cool.  He told me, “I am a buff pussy.  But no matter what, I’ll cover you!”  He had a fascinating story about getting thrown in jail and having to fight with the other inmates inside of the cell for four days.  He told me, “I was so scared of catching AIDS.  My hands were bleeding.  I was afraid to hit anyone.”

My friends thought it was a good idea to drink Jagermeister.  I knew it was a bad idea.  They were sure I needed to drink it too.  I was sure I did not, but they were great guys and I did not want to be a poor sport.  I only had one shot, but most of my memory is gone from that point forward.  I remember them driving me home, but I do not even remember saying goodbye.  I did not get phone numbers.  Nothing.  That is the end of the night.  It is why I hate shots so much.  I can drink beer until lunch time the following day and still be cool.  Dump one shot of hard liquor in me and my memory decides it wants to be no part of whatever I am going to end up doing.  Beaver and hard liquor are a terrible match. It ruins me.  I have known this for 10 years, but no one ever wants to believe me.  Everything I can remember from before the Jagermeister was with a wonderful, great community of people!  After, well, that is hard to say…

I want to thank you so much for such a wonderful day Walvis Bay Off-Road friends!  You guys are great! 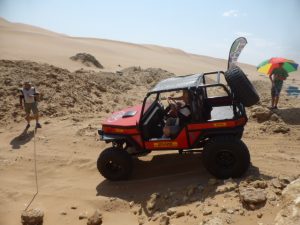 Yea, I know, it looks like a lot of fun! 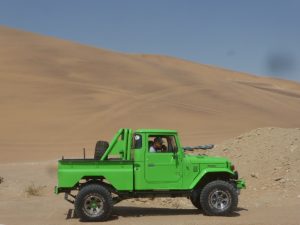 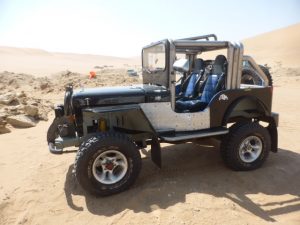 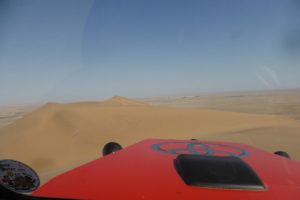 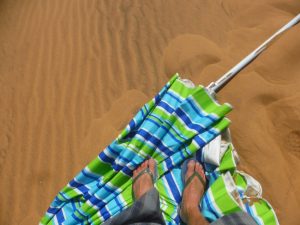 Yea, I had to stand on this umbrella because they sand was so hot I could not handle it and could not escape. 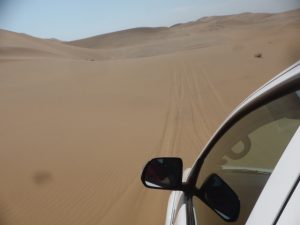 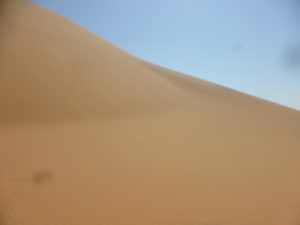 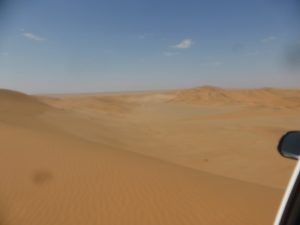 This is your Saturday if you have a 4×4 in Walvis Bay. 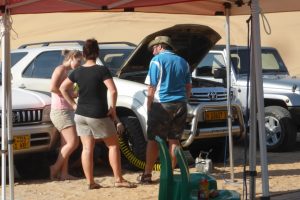 Everyone lets their air pressure down to 0.5 PSI for the sand, then they have to pump them up again to go home. 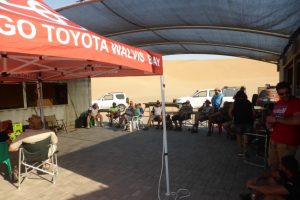 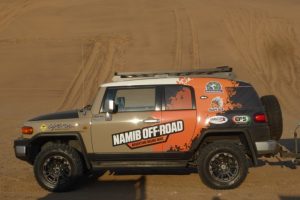 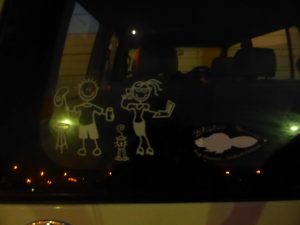 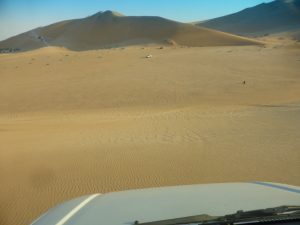 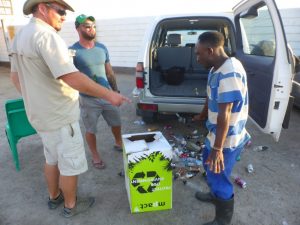 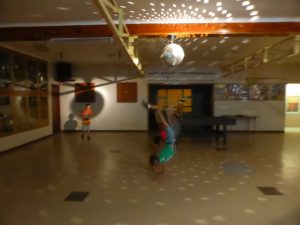 “What I learned today: When you go shopping for a woman, you will end up buying things in a supermarket that you did it even know could be purchased in a supermarket. Barley? I wondered if I was going to have to visit an agricultural store to find that... But, nope, there it was on the shelf at Walmart! Huh! The more you know...!”
— Lessons of Life
[View All]