Hitchhiking from Sossusvlei to Lüderitz

Random ‘Did You Know’ – Due to so many people shaving their pubic region, crab-lice are heading towards extinction?  (Though that could just be drunk-talk I have been a part of.)  Nonetheless, I feel like I want to make t-shirts that show a bush which say ‘Save the Crab!’  (I really got off topic here…focus…)

I heard my friend Willam get up about five minutes after I got moving.  He was going to make sure I did not sleep in and miss my ride.  Wow, there are good people in this world!  I folded up the blankets and packed away the mattress I had slumbered on.

I have been roughing it, but people sure have been good to me.   Life is getting pretty crazy for me here.  I bought a plane ticket back to Europe two mornings ago.  I think I need to go back for my own good.  But, how am I going to be able to handle western-society selfish coldness after the way the world has been taking care of me so well here, especially in the past month…

My ride arrived at 05:11 and I got into the front seat of a Namibian government pick-up truck.  In the box were three people wrapped in blankets to keep warm and in the front were a man driving and a woman who sat on a pillow on the console between the bucket seats.  I was given the honour of the passenger bucket seat.  I admitted that I felt guilty for getting the best seat in the vehicle.  I offered it to the woman.  The man driving said that he had made arrangements of where people would sit before and that I was to have the passenger seat.  I told the lady we could switch when she got sore from sitting on the console.  We had a three-hour drive.

The driver drove at speeds that were totally unnecessary on the gravel roads.  The only thing that I liked about his speed was that it would mean less time in the vehicle with him, though obviously at an exponential risk.  I was horrified after the car accident I witnessed two days ago and I was happy that I had a seat belt to wear.  Driving 140 km/h down washboard gravel roads with people riding in the back of your vehicle is totally irresponsible.  On the drive we even stopped at a fatal accident site of the driver’s friend.  And then we sped off again at 140 km/h…

When we arrived in Mariental, the driver took me to a fuel station where a mini-van coming from Windhoek would pass through that I could probably get in to take me to Lüderitz.  As soon as I got out of the truck and was getting my luggage ready on the step of the fuel station building, a Caucasian man came out, looked at me and asked me if I needed a ride.  He, Andre, was driving to Keetmanshoop, which was half way to Lüderitz.  Wow!  I had not even begun to hunt for a ride yet and one had come to me.  He even waited for me to go into the shop to buy water and breakfast. 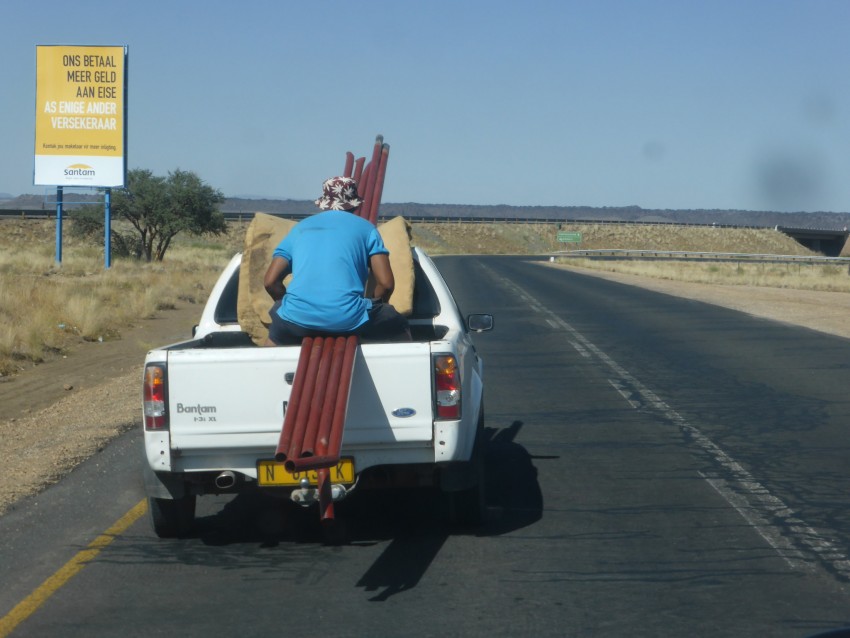 A Namibian tie-down = an ass.

Andre told me he was happy he had picked me up as we arrived in Keetmanshoop.  He snapped his fingers as he was referencing how fast the drive goes when one had company to chat with.  We were talking about South Africa and I asked him what he thinks has to happen to clean up the huge amount of crime there and to change things so that life has value to prevent the amount of murder there.  He told me that they need to bring the death penalty back to the country.  Wow, that is an interesting perspective.  He dropped me off outside of the city.

Not a lot of cars were on the road outside of Keetmanshoop, but thirty minutes later I got into a truck with a black truck driver who stopped to give me a ride.  He and I chatted well and he told me discussions with others from different walks of life are important.  My new friend told me, “We must share so that you remain soft in your mind.”  I really liked his thought on this. 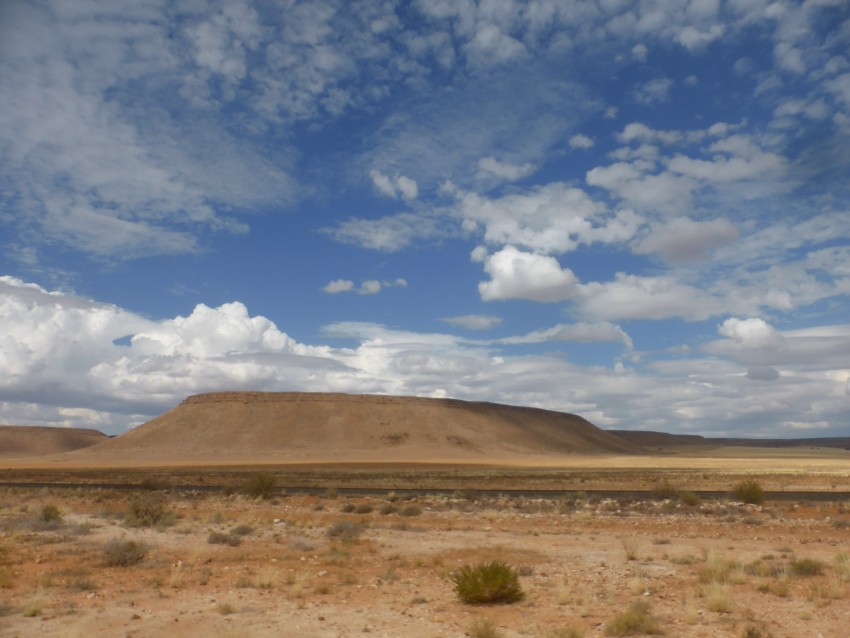 The landscape between Keetmanshoop and Lüderitz

He dropped me off next to a town called Aus, where I waited on the side of the road.  I was concerned because in 15 minutes, not more than five cars had passed.  I was worried about hitchhiking to Lüderitz from Aus.  It was desolate.  Eventually, I was joined by another local black man, who ran with me for a semi-truck that stopped for us!  Sweet!  It worked in the middle of nowhere…. 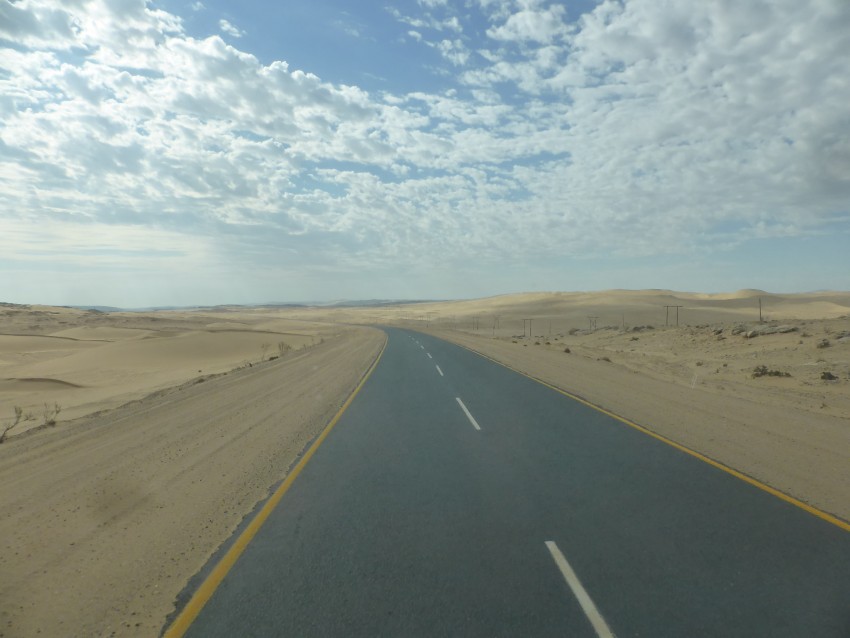 The sandy highway between Aus and Lüderitz.

We were 121 kilometers from Lüderitz when we were picked up.  It was a local black man who had picked us up.  We chatted about travel and life.  The passenger hitchhiker who was waiting with me on the side of the road was a man in his 40’s.  He told me that the difference between white and black people is that, “A deal is a deal with whites.  If you make a deal or a plan with a white person, you can count on it.”

Today was a pretty good day getting into the minds of Namibian locals.

At about 15:00, we arrived in Lüderitz and I checked into the Lüderitz Backpackers for 120 Namibian dollars ($8.41), which is the best price I have found for a hostel in a very long time.  I went for a walk around the town to see if I can figure out how to get around without a car and spent the rest of the evening in the hostel, catching up the blog because I actually have internet, though it is terrible and this has been incredible time consuming. 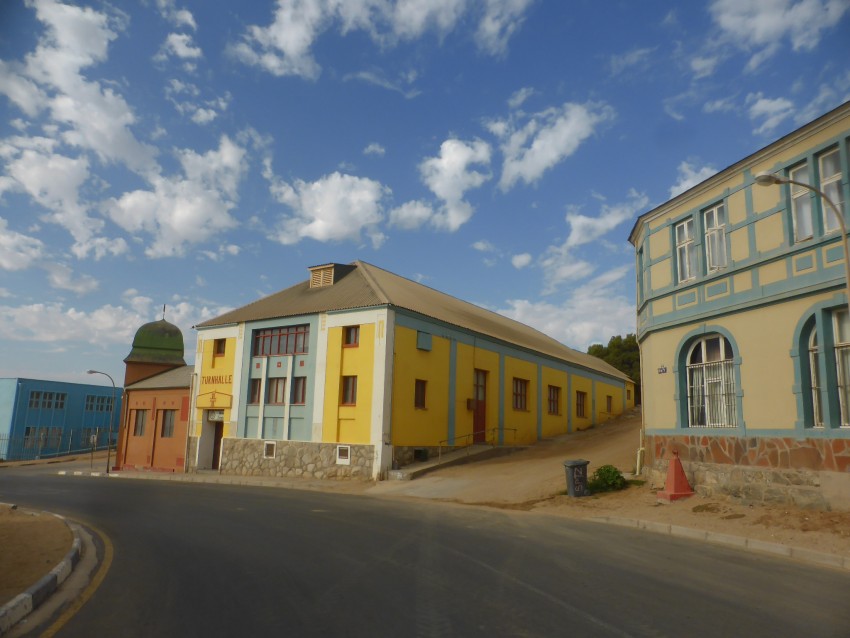 It has been a pretty heavy day with a lot of thoughts.  I have also been thinking about something Julia from Belarus told me while we were in Walvis Bay together.  She told me that when she was in Switzerland, she received a text message from her mother at home that said, ‘Papa has died.’  Julia told me, “At that moment, reading that text, I aged five years and 10 kilograms disappeared.  I am not sure where they went, but with the message, all of that happened in an instant.”  I can not quit thinking about her words about this.  The way she describes what she went though in an instant.  That thought had been with me for about a week now.

I really wanted to talk about that because it is one of the most interesting things anyone has said to me in a very long time.  However, now I need to end the blog with a happy ending.  So I am going to reference one of my favorite things in Namibia.

The people of this land are extremely polite.  Polite and sweet.  I find it extremely cute how the ladies in supermarkets respond with one word when you say ‘Thank you’ to them.  They either say the word, ‘Welcome!’ or ‘Pleasure!’  They do this in all supermarkets.  It is part of the Namibian culture.  It is super cute and extremely sweet. 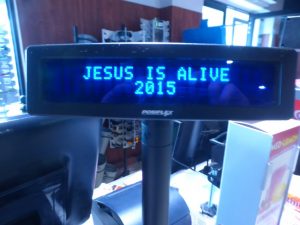 Gross. This was what the cash register told me instead of telling me how much change I was going to receive. 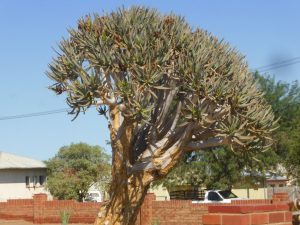 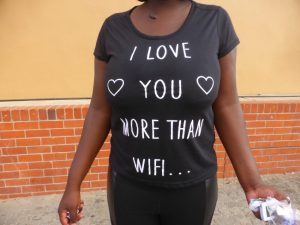 Wow, in this day and age that is some serious love. 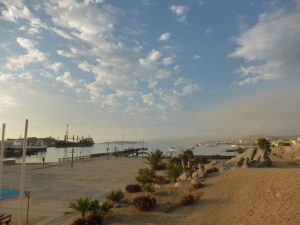 “Irmante asked me what I thought the first meal the 1972 Uruguayan rugby team plane crash survivors ate after 72 days marooned in the Andes in which they had to eat the deceased.  I guessed, "Vegetarian."”
— Education
[View All]