They…Christian, his wife Steffani, and six-year-old, Konstantin, from Dortmund…came into my life last night while I was having dinner at the lodge.  They were at the next table over and I asked them if they were going to the Sossusvlei in the morning.  I needed a ride and I assumed any tourists at the lodge were on their way to or from the Sossusvlei sand dunes.  My assumption was right!  They said they were going to Sossusvlei in the morning.  Perfect.  I asked them if they had room for a poor backpacker.  Christian got a little awkward and gently told me that they only had room for the three of them to sleep.  I told him that I was not inquiring to sleep in their room, but rather to catch a ride with them in the morning.

Oh!  Oh, yea, they were cool with that and welcomed me to ride with them.  However, the highlight for sure was that I think I could have probably talked them into letting me sleep in their room for the night.  That makes me laugh.  Germans are always great people, post 1945.*
(*I had to put that in there because it was far too difficult to not make that joke.)

And true to German stereotypes, I was to meet them at 04:30 and of course they were ready to go by 04:29.  I love their culture.  Steffani and Konstantin gave me the front passenger seat in the car.  So nice.  They said they had lunches made and that they would share theirs with me.  And, they had a beer for me for later in the day.  I freaking love Germans.

We started on the drive through the dark towards the Sossusvlei sand dunes.  Christian told me that when he lived in southern Africa about 10 years ago there were Europeans who came in to educate the locals about safe sex.  They were teaching the people how to use condoms and for an example, they used a broomstick that they rolled the condom down to demonstrate usage.  Later, when the Europeans returned after some weeks and visited people’s houses, all of the houses had a broomstick with a condom rolled down it.  Apparently there was some misinterpretation between education and witchcraft… 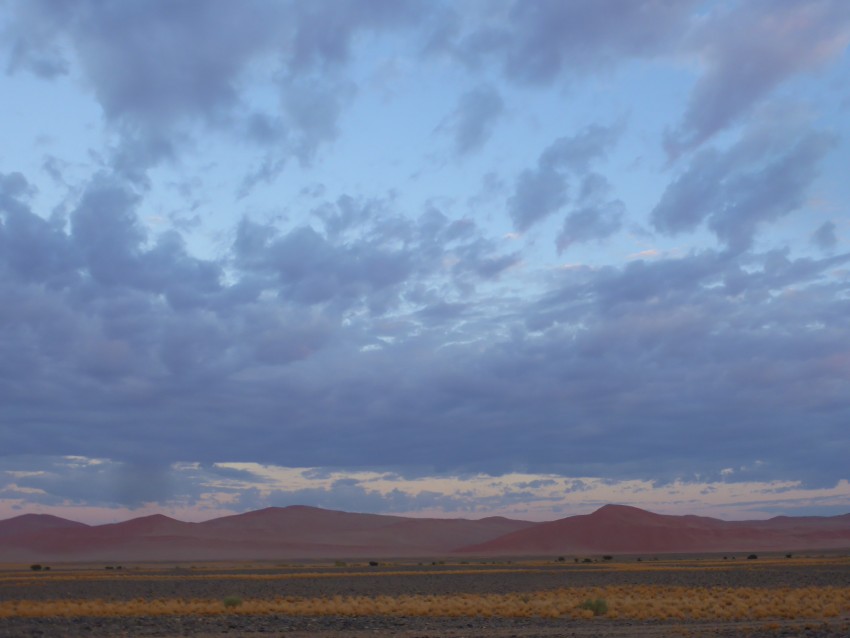 The Germans and I arrived in Sossusvlei just after 06:00 and there were cars lined up to get in the gate.  The sun was coming up in the east.  The colors of the sand dunes, the oldest in the world, as we drove west were unbelievable beautiful. 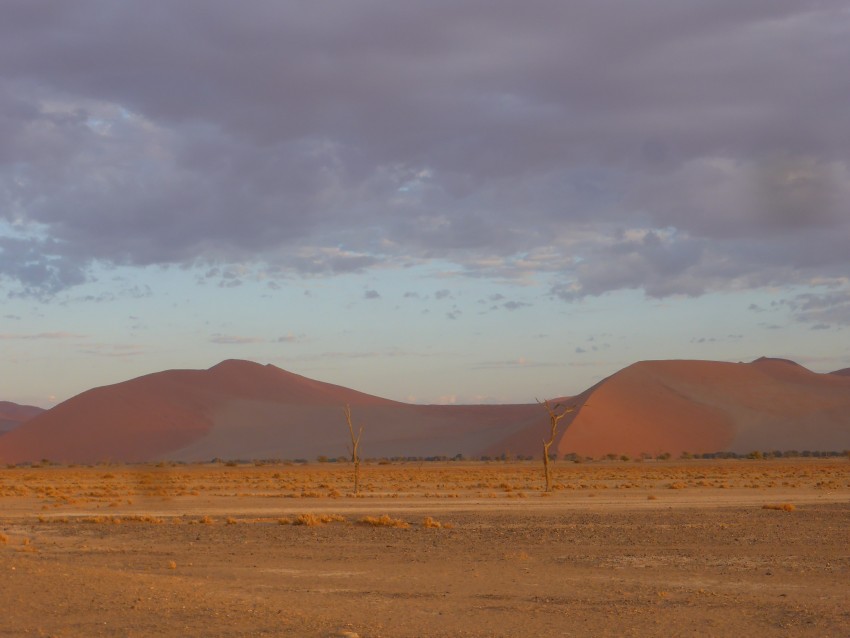 The grey and red swirl of the Sossusvlei sand dunes. 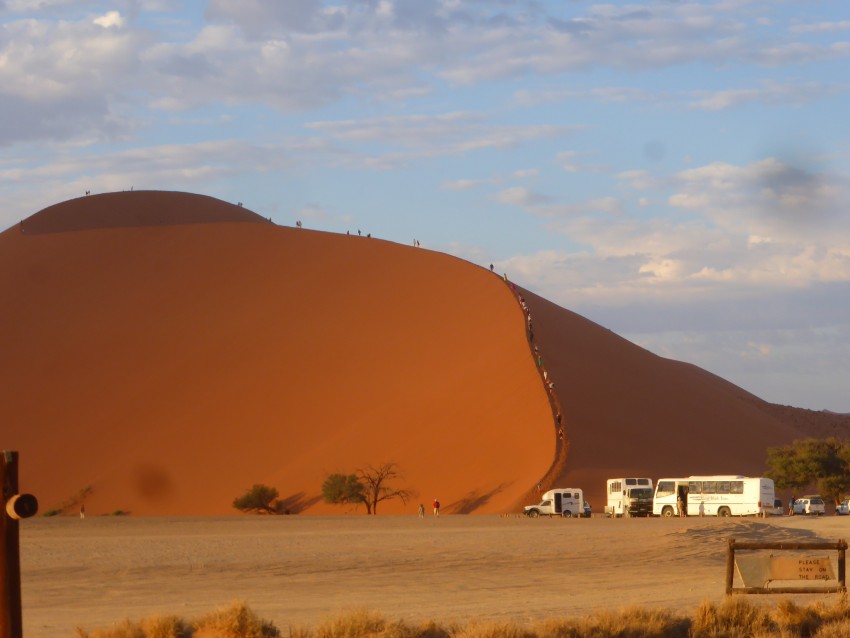 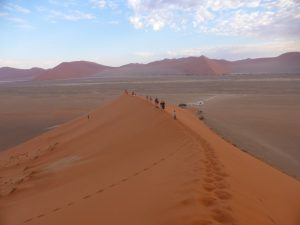 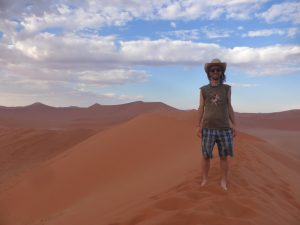 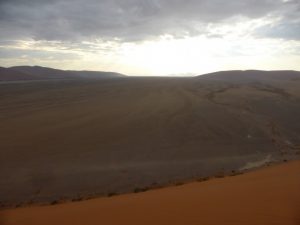 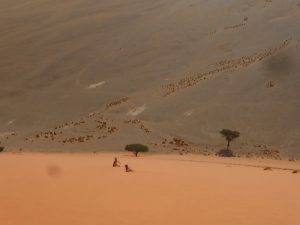 It was a pleasure today to communicate in German with a six-year old.
We became pals. Christian, Steffani, Konstantin and I stopped at the famous Dune 45. The four of us got out to climb its height with a crowd.  We spent about an hour on the dune and then chose the highest point to come down.  I ran and leaped down the giant mound of sand like a superhero and felt like I was leaping at least 3 meters with every bound.  It took a lot of energy and power to get right to the bottom of Dune 45, but cheers rained down upon me from the other climbers far above who had watched the spectacle.  I bowed… 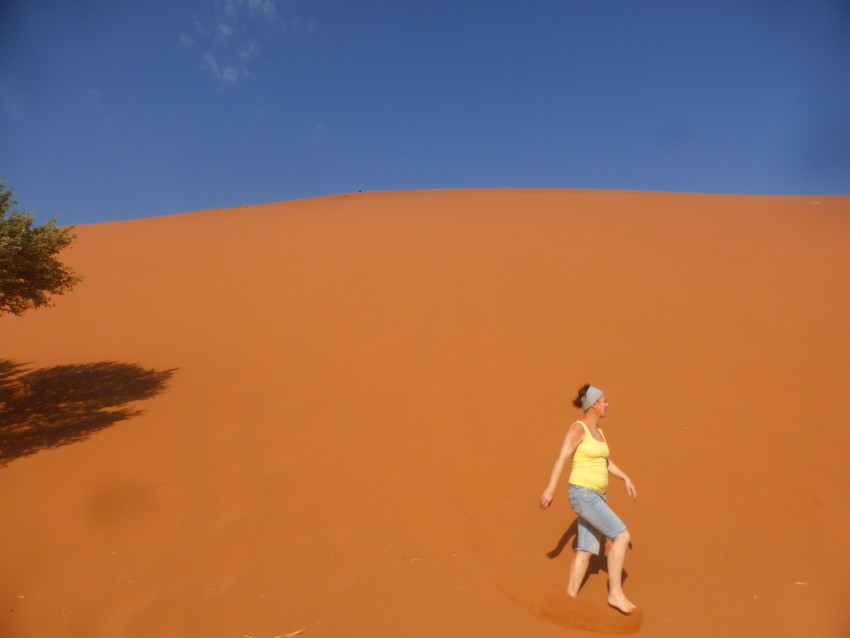 It does not look like much with a camera, but this dune must be 100 meters tall. See the specks of my friends at the top?

It cost us 130 Namibian dollars each to get each of us into a jeep that drove through the sand for about three kilometers to the Deadvlei (Dead Valley), a strange grey colored pan of dead trees in the middle of the vibrant red sand.  It stands out as something that seems completely misplaced by nature, surrounded by the unbelievable hot red sand. 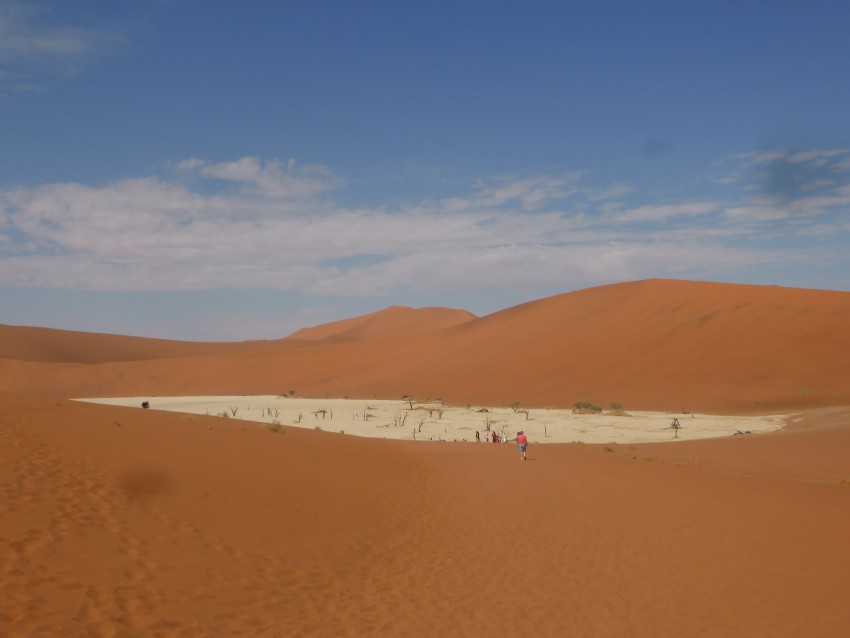 Photos.  Beauty.  Drive out of the park. 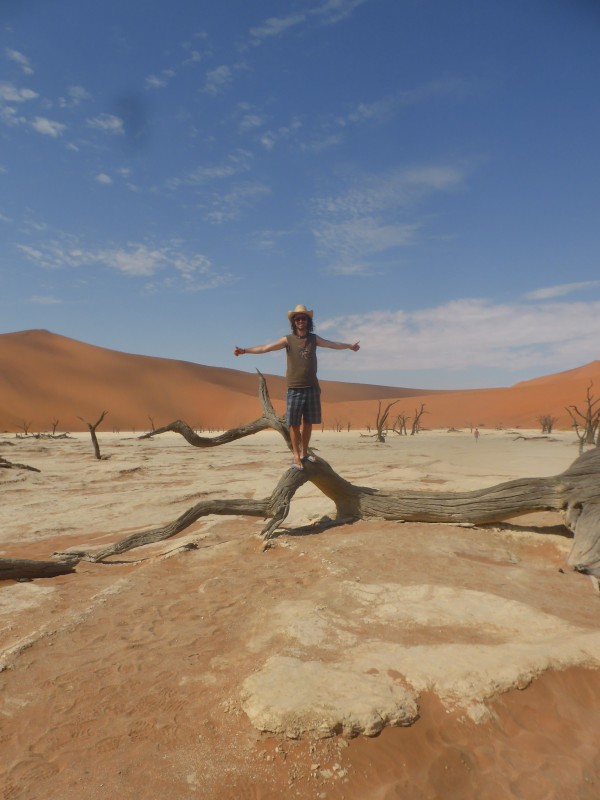 Christian, Steffani, and Konstantin dropped me off with goodbyes at the entrance gate of the Sossusvlei sand dunes where I hung out for the afternoon to try to find a ride out of the very secluded area of Namibia.  I was chatting with Willam, the local man running the gate.  He did not want to like me at first, but I hung around long enough that eventually completely I won him over.  He even started asking cars coming through the gate where they were headed to in an attempt to find me a ride and it did not seem like he was just trying to get rid of me. 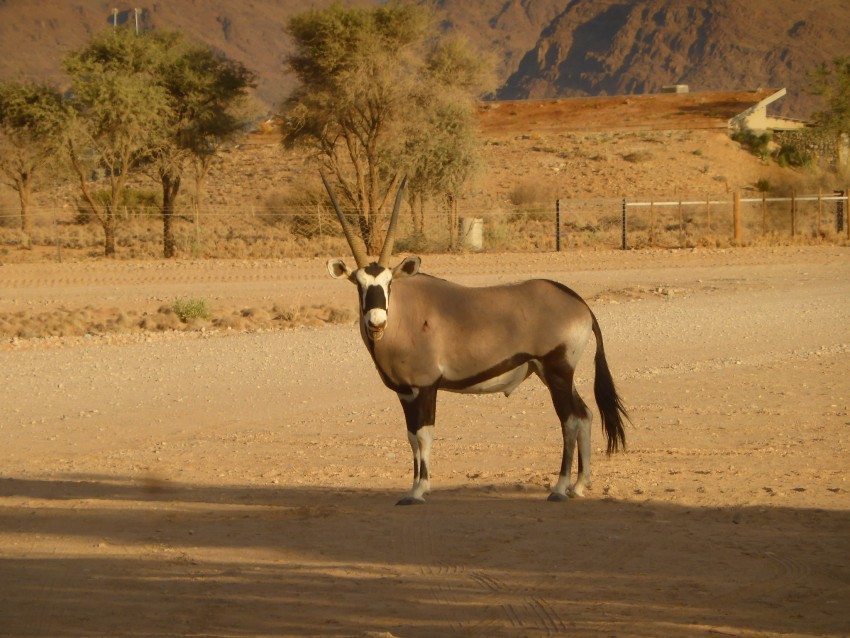 This oryx had been in a fight with another in front of the park gate. They both had punctures as they tried to kill each other. See the puncture on his shoulder?

So, at 18:00 I walked with Willam to his government house that he shares with two other guys working in the park.  He started to make dinner.  I told him not to make anything for me.  He said, “Ah, we are cooking.  We not have women, so we are cooking ourselves.”  A wonderful meal was prepared for the household, which I had become a part of for the night. 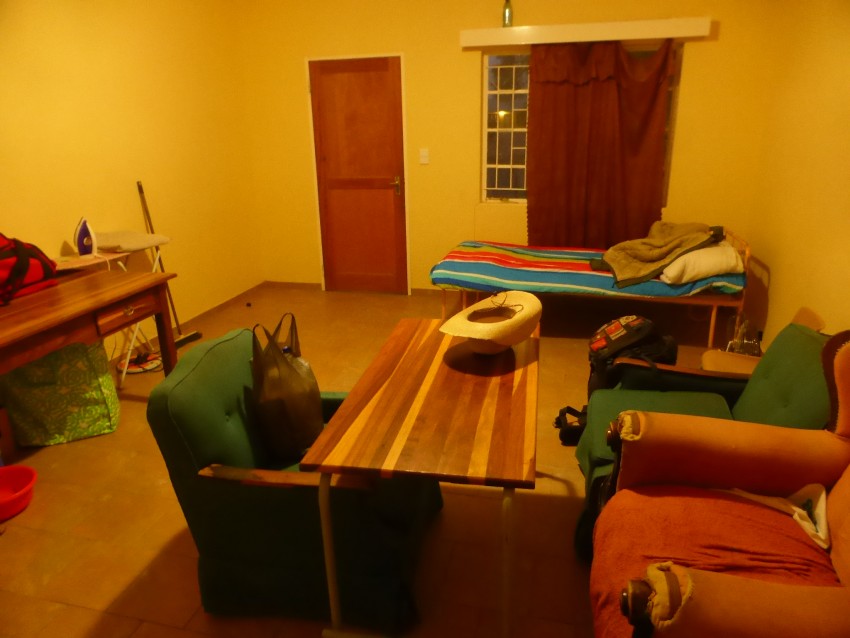 My home for the night at Willam’s government house.

Not only that, but Willam had found out that a co-worker was driving to a town called Mariental, which is along the highway where I am trying to get to, and he arranged a ride for me in the morning…

It is crazy where I have been getting to stay lately.  I just have this innate confidence that my charm is going to get me whatever I want and whatever I need.  I have really been relying on that.  Maybe that is foolish, but it has been incredibly effective in bringing wonderful people into my life that take care of me. 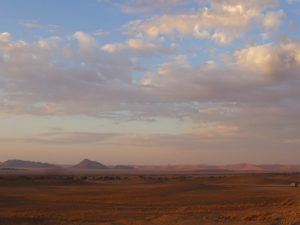 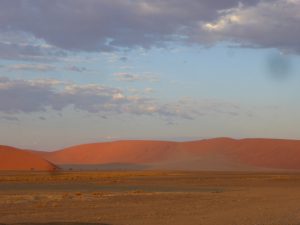 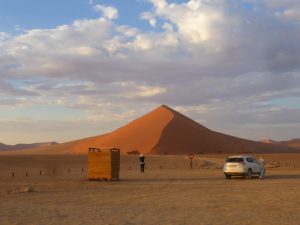 Welcome to the oldest sand dunes in the world 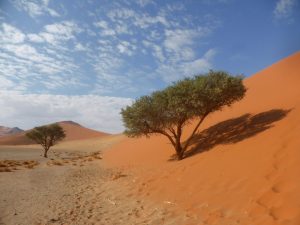 ‘Um, you can grow here tree, but I will probably engulf you some day.’ 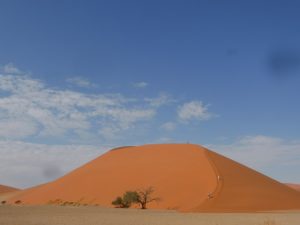 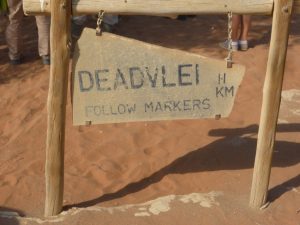 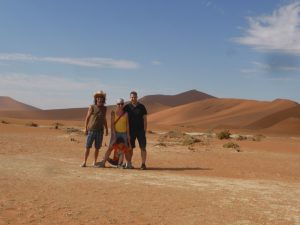 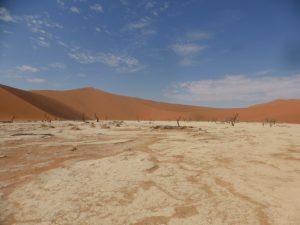 It looks pretty hostile. The red hot (but not red-hot) sand around it sure is. 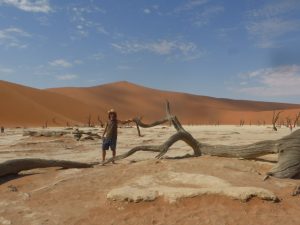 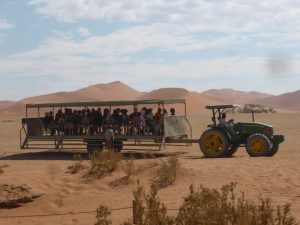 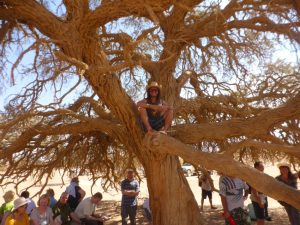 A beer in a tree. 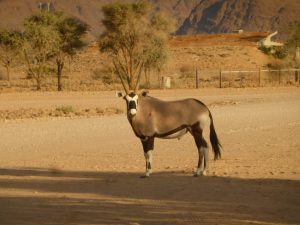 This oryx had been in a fight with another in front of the park gate. They both had punctures as they tried to kill each other. See the puncture on his shoulder?

“When I was 12, turning 13, my 21 year old cousin Donavon came to the farm to help us seed. He told us that dad told him to take me to the USA for the afternoon so that I could get some Red Man chewing tobacco. My cousin said that he asked my dad, “You want me to what?” Dad told him, “Yea, take Stephen with you down to Montana to get some Red Man chewing tobacco. It is cheaper for him there.” My cousin told us that he has told many people the story over the years of driving me, a 12 year old kid, to America at my dad’s request, so that I could buy cheaper tobacco.”
— Cousin Donavon
[View All]