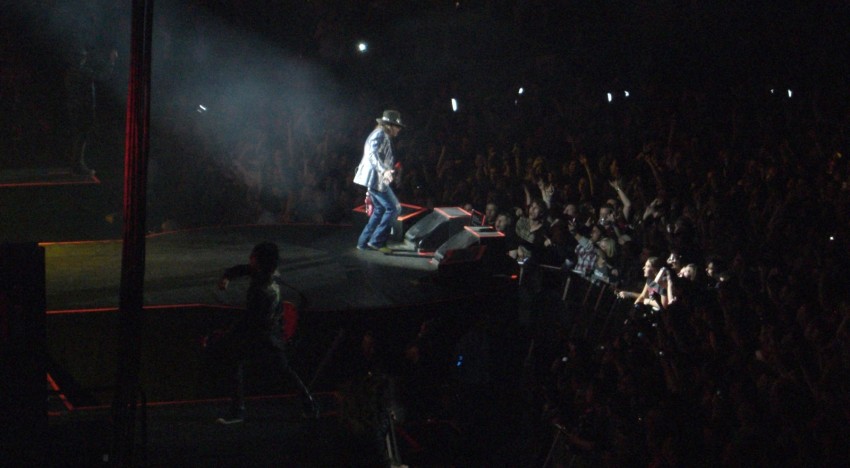 I got up early to go to work for that all staff meeting.  I worked in the afternoon as a host at Hard Rock Cafe and after my shift I went with two girl coworkers to their house and got changed to get ready for the Guns ‘N Roses/Axl’s Roses concert.  I wore my plaid party pants, 1970’s shirt, and one of the girls back-combed my hair to give me an afro.  My hair was huge and it looked great.

Guns ‘N Roses/Axl’s Roses had come to London about a month ago.  Why does Axl Rose call himself Guns ‘N Roses when he is the only member of that band left?  John Fogerty does not call himself Creedence.  Fuck Axl.  Anyhow, his new band, still called Guns ’N Roses, were in Melbourne the Hard Rock Café a couple of years ago and partied in there two nights in a row and slept with a couple of the waitresses. One of my managers at London Hard Rock was working in Melbourne at that time and became really good friends with the band and told them he was moving the Hard Rock London. Two years later, when Jeremy was in the office at Hard Rock London one of the hosts came to him and told him that someone wanted to see him.  He was initially annoyed because he assumed it was a customer who wanted to complain about something, so he asked the host who it was.  She said, “It is Guns ‘N Roses.”  Pretty awesome they showed up and gave him eight free tickets both nights to the concerts for us Hard Rock staff.  I got one of the tickets, which also included a Guns ‘N Roses After Show pass. I had never had my hands on something like that before.

We had seats, not floor tickets, and after failing to bribe security with £20 to let my friend Katie and I onto the floor, after befriending security as well, we watched the show from our seats. There were eight of us, all in one section, but some of the seats were in different rows.  Sebastian Bach of Skid Row was the opening band, but we missed his show and went straight into it with GNR.  Axl can still sing just as well as he did 25 years ago.  Man that guy has a great voice.  He performed for about two hours and was actually on time.  He played most of his new Chinese Democracy album, most of Appetite for Destruction, and a handful of Use Your Illusion.  It was a really good show, though not exceptional.  His lead guitarist wears a top-hat, and has a cigarette hanging out of his mouth while he plays Slash’s riffs and solos.  It is the kind of thing that makes you look out of the corner of your eye when you watch him, because you kind of feel ashamed of him. I wonder if the lead guitarist does that by choice, or if Axl makes him be Slash.  There is something about that it that made me sort of uncomfortable.  It is weird how this guitar player is basically just an imposter in image and sound.  Everyone that I talked to thinks it is a travesty.  It is great that he has become a rockstar, but he is someone else as a rockstar.  I wonder if I could be comfortable in that role, not having my own identity?  The last song was ‘Paradise City,’ and Katie from work and I tried to dance in the stairway, and we were rocking out hard, but security made us go back to our seats.

So, the Afterparty was downstairs in the London 02 Arena were the concert was, and there were about 30 of us in some dressing room. I had no idea what to expect. Well, I was kind of expecting a dark room, music playing, alcohol, smoke, lounging chairs and couches with half naked groupies lounging about doing lines on a coffee table, plenty of other scantily clad women walking around, carrying blow on mirrors that were being passed around to everyone.  It was none of that.  We were in a brightly lit room, with hard plastic tables and chairs, blue flowered table cloths, and flowers on the tables in vases. It felt more like a wake then a Rockstar afterparty.  I guess the 1980’s are over, even if the fashion is back.

We were in there for 20 minutes and no one know what was going on, so I ate the flower in the vase closest to us, just to liven up my failing group who were contemplating leaving.  Eating a flower is a fine ‘save’ a fine move and has great entertainment value.  I told them my group that there was no way anyone was going home and that this could turn out to be the best night of our lives.  Feeling confident my group was more content, I went to make some friends to see if someone else knew what was going on.  I found a guy wearing a Guns ‘N Roses lanyard, and he looked important, so I asked him who he was.  He told me his was in charge of Axl’s wardrobe.  I said, “Oh, you take care of Cher’s wardrobe changes through the concert?” in reference to Axl’s six wardrobe changes.  The wardrobe guy thought I was funny and we talked and I asked him what was going on and what was going to happen.  He told me that some of the band would come and hang out later.  I asked him if there was going to be alcohol.  He did not know.  I asked him if he thought Axl would come.  He said Axl comes sometimes, but he is always late, after a couple of hours have passed.  I wanted to meet Axl, just to see if he is as much of an idiot as the premonitions I have of him indicate he is.

So, with some time to spare, I decided to meet the groupies who were in there. It never hurts to be nice to girls who are trying to screw rockstars because maybe they know things. My favorite in there was an extremely hot 20 year old blond Swedish girl, wearing black leather pants, a David Bowie t-shirt and was dressed to make everyone in the room look at her.  Everyone did.  She told me her name was Lea, and she was with three friends. I asked her how she got hooked up with the After Show. She told me she knows Frank, the drummer, who is also the same guy who hooked us up with our tickets. I asked her how she knows him.  She told me she met him in Stockholm.  I asked her if she lives here in London.  “No, Stockholm.” I asked her how long she was in London.  She told me, “Just for the two concerts.”  Just for the concerts?…  “Wait a minute… So, you live in Stockholm, and you met the drummer there, and you flew into London for these two shows, and then you are flying home after…. You are a Groupie!”  “I am not a groupie!”  “Yea you are.  You are totally a groupie!”  She smirked a, ‘Umm, screw you buddy!’ at me.

The band showed up, minus Axl, but Axl’s band members, Bumblefoot and Frank Ferrer came in with a bag of beer.  The crowd of gatherers almost tackled them like a mob to get to the beer they had.  I was one of the beer rushing mob.  I was dry.  Sebastian Bach from Skid Row came in and he was drinking ‘Faggot’ wine that he said Axl had given him.  I asked Sebastian if I could have a picture and he posed for me, but then changed his mind and told me that he did not want to be in a picture where he was drinking ‘Faggot’ wine.  I thought it would have been a funny picture.

I made friends with Axl’s Roses drummer Frank, who was pretty cool around me and I asked him what he thought they would all do later.  He told me that he was not sure, but in a couple of hours they would do something for sure, and he said they were staying at the Marriot, close to the Hard Rock, so we would all hang out later.  Cool.  About a half hour later, suddenly I realized the band was leaving with about 10 people, including some of the groupies, which included Leah from Stockholm, who was sure she was not a groupie.  When I realized I was on the side of the have not’s, and the have’s were moving to a different room behind a security guarded door, I called out to Frank the drummer, but he had the super hot Swedish groupie beside him as the doors closed, and he failed to remember who in the fuck I was as security informed me that everyone had to leave now.

Security threw the rest of us out, and two of my friends and I caught a cab at about 4 AM and headed back to Camden and home.  I guess it went just about the way one would expect it to go.  Groupies trump all… rock and roll biographies do not lie. 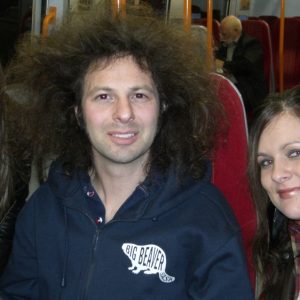 Heading to the show. 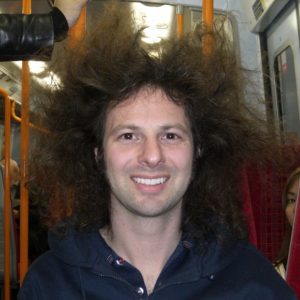 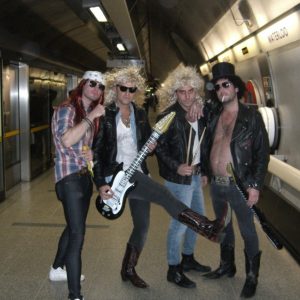 These guys thought they could rock. 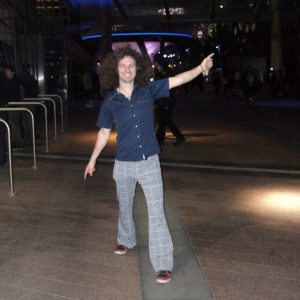 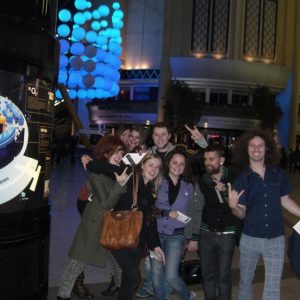 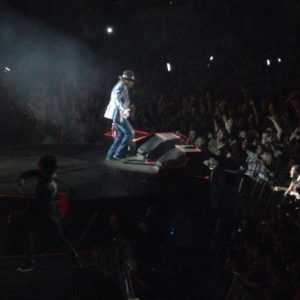 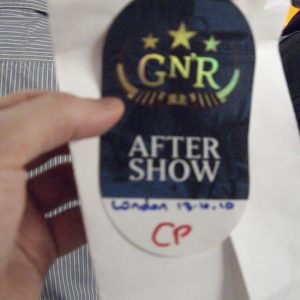 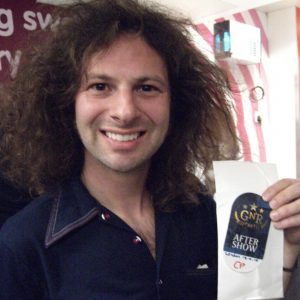 I have never had one of these before! 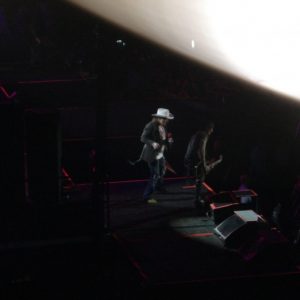 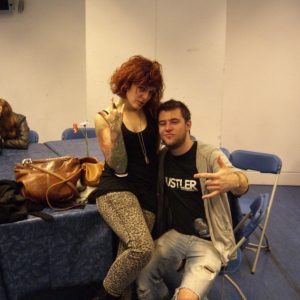 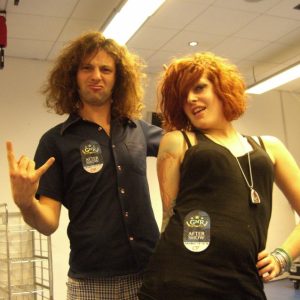 …waiting on the action. 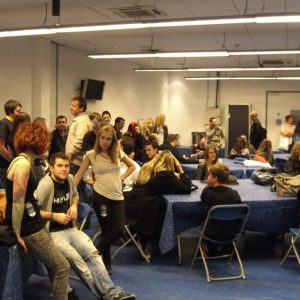 This is what a GNR after-party looks like today. It is more like a wake than a dark and seedy room of hookers, and midgets with plates of cocaine attached to their heads. 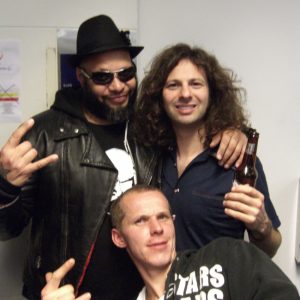 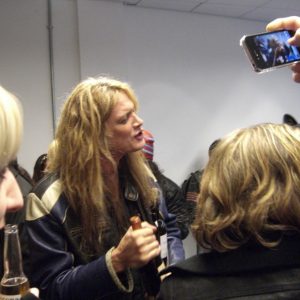 Sebastian Bach, drinking ‘Faggot’ wine given to him by Axl.

“I do not know if I am going to be able to get used to the way Korean men take you by the hand when they want to lead you somewhere, like to meet their wife and kids at a table. It is a sign of respect, but it is really uncomfortable for me as a westerner to have a man hold my hand as he leads me around a bar. It makes me want to wash my hand immediately to get off the awful man-clam.”
— Mand Holding in South Korea
[View All]