Cotacachi to Popayán: Changing Countries and Talking to Idiots

Cotacachi to Popayán: Changing Countries and Talking to Idiots.
July 2.

Changing countries is always hell somehow.  Even as a wily veteran traveller, it is always a little bit terrifying heading into the complete unknown.  By now I should be used to that slight feeling of un-comfort, yet I still feel it every time when I am changing countries.  There is a new currency to learn the value of when changing countries, a new list of cities to geographically memorize the names of, new everything that you had adapted to…  I used to wonder how it was that professional athletes who have played many hundreds of games in front of huge crowds could still get sick before games from nerves, but maybe the feelings are something relatable.  I never do an ounce of research of where I will go in a country beforehand, as I prefer to meet people heading the other direction while the are also changing countries and I ask them where they have just come from and where I should go. Their advice is much better than what one could ever read from a generic guidebook.  And surviving with terrible language skills requires some patience, some waiting around to analyze the situation when I have no idea what the answer I just received was, and a lot of instinct trust.

Actually, I have been studying Spanish semi-daily, and it is really growing for me, but the biggest problem is that under pressure I lose what I have.  If I have time to think, I can hammer out something remotely understandable to the locals so that sentence #1 goes well.  Then the native Spanish speaker assumes that I can speak Spanish and they fire an answer back at me that sounds like a voice that has been recorded and played back audibly in fast forward.  Then I present the confused face.  I explain that I barely speak Spanish.  Then the native speaker repeats the sentence at the same speed but with a hint of frustration.  I try to grab three words out of the sentence and attempt to grasp the context.  I respond with, “Si…,” more confused look, and I walk away to try to formulate another way to get the answer I need.  The trouble is that conversations move too fast.  If dialogue exchanges were at 25% of the speed I would have time to think and respond, but it happens so fast that I do not have time to use my Spanish reserve words that are dimly illuminated somewhere in the back of my brain right behind the location for former pet names.

So, this Unilingual Moron headed on the road again today with what he has.  On the go changing countries, I learned the Spanish equivalents for ‘I can, there are, border, and if’ which will all likely come in handy.  It was a thirty minute $0.45 bus from Cotacachi to Ibarra.  Then I waited in the bus station under a sign that said ‘Tulcán,’ which is the last border town on the Ecuadorian side of the Colombian border.  Two different buses pulled in under the sign but none were going to Tulcán.  I asked a man when the bus was coming and he fast forwarded some dialogue to me, said a word that sounded like the Spanish word for ‘mother’ and pointed out past the gates.  He would not be of any help.  So, I sat, waited and read about Colombia’s history from a book.  I wish I could say that I am going to learn what patience is from this experience here, but I know that is an unrealistic expectation from me.

After about 45 minutes, I got up to start asking questions and a bus rolled in with “Tulcán,” proudly displayed in the window.  Nice timing.  They say patience is a virtue, but so is ambition…  I got on the $2.50 bus that was to take two and a half to get to Tulcán which was probably closer to three and a half after we stopped to pick up so many people and stopped for fuel and for any other excuse.  I spend about 10 minutes formulating what I imagined was the perfect sentence in Spanish to ask the other two gringos on the bus the equivalent of, “Do you want to share a taxi with me to the border?”  It fell on deaf ears because they were Israeli’s, but at least I felt more Spanish than them so I came out ahead anyhow. We got a taxi for $3.50 total to the border 6.5 kms away for changing countries.  Luxury.  It would have cost $1 each to ride two different buses and it would have absorbed more patience.

Ecuador exit.  ‘Stamp.’  Colombia entrance.  ‘Stamp.’  Taxi negotiations.  Colombia already does not feel as honest as Ecuador and we really had to haggle with the taxi driver to get a reasonable price to take us to the bus station and yet I still know we overpaid.  The headache of changing countries…

On the drive, our taxi driver stopped on the side of the road where a woman was sitting.  She had a funnel in her hand.  Suddenly she ran behind a cement marker and came out with a jerry can of gasoline.  She put the equivalent of $4 of blue colored fuel in the car and the cabbie paid her.  When he got back in and we took off I asked him what just took place.  The cabbie told us that fuel is cheaper and better quality in Ecuador.  It is also dyed blue so that it is identifiable.  The girl on the side of the road had smuggled the fuel into Colombia from Ecuador.  Awesome.  Two minutes later we had to help a farmer chase cows down the highway.  Maybe I am going to like this country.

So, the Israeli girl asked me where I am from.  I answered with my standard response, “I am from Big Beaver, Saskatchewan, Canada but I live in London as much as I can,” answer.  The she said, “Oh, that would explain your weird accent.”  I asked her what she meant.  She told me that I do not really speak like a Canadian.  I asked her if she had only met French Canadians.  She had met more.  I told her that this is what a Canadian sounds like.  She told me that I have a bit of an English accent.  I told her that I do not.  She wanted to argue with me.  It continued.  It annoyed me.  I told her, “Look, I do not want to argue with you.  This is what a Canadian sounds like.  Trust me.  I am a Canadian.  I know.  You are Israeli.  You do not know.”  Sharp and intolerant.  That is two times that an Israeli girl with a nearly un-understandable accent has tried to tell in the past two months that I do not have a Canadian accent.  No one else has ever told me that before.  I do not really care, but do these Israeli girls just like to start an argument because for the sake of it.  I seriously doubt that the female linguistic ear is beyond all other humans and they have found something about my speech that no one else has ever picked up on.  I have never had anyone at home say anything of the sort, and if someone should notice such a thing it would be people from home.  I just like to imagine the reverse situation where my level of Hebrew was the same level of shitty as the girl I had this conversation with today.  And I told her through my thick ‘Canadian’ accent in Hebrew that she did not sound like she was from Israel because I have met a couple of people from Israel and they sounded different than her so her Hebrew was strange and maybe she was actually from a far flung corner of Poland where Hebrew was prevalent.  Imagine how that conversation would have gone?  The stupidity of the exchange she wanted to have really annoyed me.  I really think I should be allowed to taser idiots.

After changing countries, The Idiot, her friend, and I got to the bus station in Ipiales, the first town on the Colombian side.  I asked the man behind selling tickets behind the counter if I should go to Pasto which was two hours away or if I should go to Popayán which was 9 hours away.  He told me Popayán was prettier so I paid $18 and got on that bus.  The ride was gorgeous through the Andes and it reminded me of the Rockies in Banff, Canada, with the hair-pin curved roads making their way around the mountain faces with waterfalls coming down them.  In short, it is beautiful.  Along the drive there are horses tethered to the side of the road to eat the grass and the horses have just enough rope that they are able to stand directly on the white line of the passing lane of the busy highway which seems to be a dangerous place where they like to be.  The horses are rebellious in Colombia.

I arrived in Popayán at 1am, and had to navigate my way to town to find a hostel.  I found two taxi drivers and neither of them knew where the hostel was that I was looking for.  I was afraid it was dangerous to be a gringo walking around in the dark city at night so I got in with the cabbie who seemed more confident.  It turned out that he had no clue where he was going.  I even had a map for him, but it was still of no help.  He stopped to ask some police where to go, and when they had no clue he asked another man on the street.  Eventually, I got out of the car to pay the man and decided to try my luck on my own.  I found the hostel around the corner from where we were parked, but it was full.  Then standing outside I met two girls who were just leaving some evening park lesbian gathering in town and they walked with me to find a new hostel.  The taxi cab followed us around as we walked, curious as to where we were going and the streets actually felt safe.  I found and I checked into Hostal Caracol at 2am and found the ambition to charm two Israeli girls who where still awake in the hostel, even through my experiences earlier in the day, because one of them was gorgeous.  However, the climax with the gorgeous one peaked when she made me cheese toast.  At 3am she went to bed and so did I.  Israeli’s are tough work…

A price-list for changing countries from Ecuador to Colombia and the experience:
$0.45 – Bus from Cotachchi to Ibarra.
$2.50 – Bus from Ibarra to Tulcán.
$3.50 – Taxi from Tulcán to the Ecuadorian/Colombian border.
$4.00 – Taxi from Colombian/Ecuadorian border to Ipiales
$18.00 – Bus from Ipiales to Popayán
$4.00 – Taxi through Popayán to find a hostel.
$11.00 – Hostel Coracol dorm room for one night. 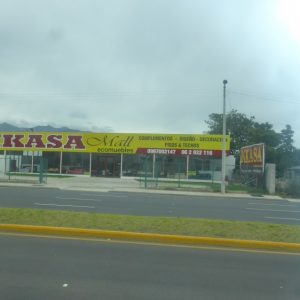 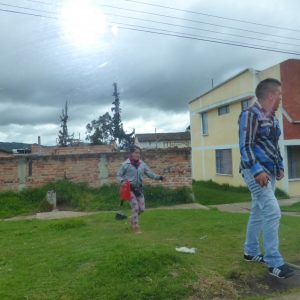 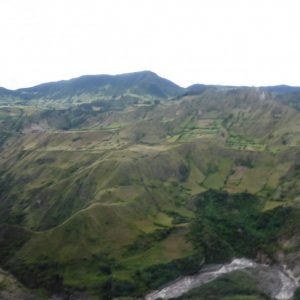 The gorgeous mountain-scape of the Andes in Colombia.