I packed my bag when I got moving and then Irmante and I headed into the center to change the rest of our money.  There was a lousy exchange rate today, so it was a battle to get a good deal and Irmante was impatient, which was driving me nuts.  Eventually, I settled on far less than I would have liked to have taken at 10.15pesos/USD just to get the job done.  We seemed to choose the sketchiest hustler on the street.  He went and got a handful of money from some other man and then when we went to exchange cash, he did not even have a room or an office to trade in.  We went around the corner inside of the entranceway to a building.  It seemed semi-legit…

Back at the house we left the girls a bottle of vodka and two bottles of wine for the hospitality, made our goodbyes and headed out the door.  That is a house full of really sweet girls.  And it sure was awesome of them to host us for so many days.  They were sad to see us leave.

We caught a bus through the city to the area where the bus terminal was and had a tough time finding the actual bus terminal.  We were short on time and had to move fast.  Eventually, we got to where the bus station was with seven minutes to spare but we could not find where our Buenos Aires to Mendoza bus was and there was no listing for our bus on the screen.  We had been to the information guy as soon as we arrived who told us our Buenos Aires to Mendoza bus would be between stalls 15 and 25, but there was no sign of our bus, no information for ‘Central Argentina’ line on the screens, and time was ticking to our 19:45 departure.

We hurried back to information and he did not seem to want to help us at all.  Irmante had to get in his face to get him to tell us that we were to find our bus at stall 25.  It was 19:43, so we ran back through the crowd with our heavy backpacks on and two Australians following us.  Our Buenos Aires to Mendoza bus had pulled up in the meantime and we got into line to load our bags where a creepy little man demanded a tip for loading our bags.  We found our seats and were off pretty much as soon as we sat down.  Our bus was $48 instead of $60.  You seem to get what you pay for in life.

We found out today that Irmante’s passport number makes her ‘Juan Gonzales’ when the country is not changed from Argentina to Lithuania.  Awesome. 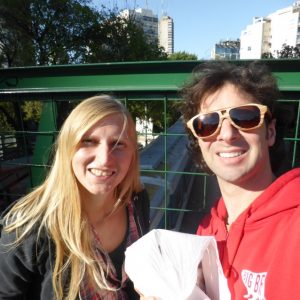