Black Sabbath, Download – Day 2.
June 11
Dan made breakfast for Emma and I and then Dan’s contact came through with two weekend passes for Download Festival that we could have for a £60 donation.  I sure wish that had happened yesterday before I blew £190 on my pass.  Then once Dan and I made it to the festival a girl was standing beside the box office to give away an extra weekend pass she had for free…. 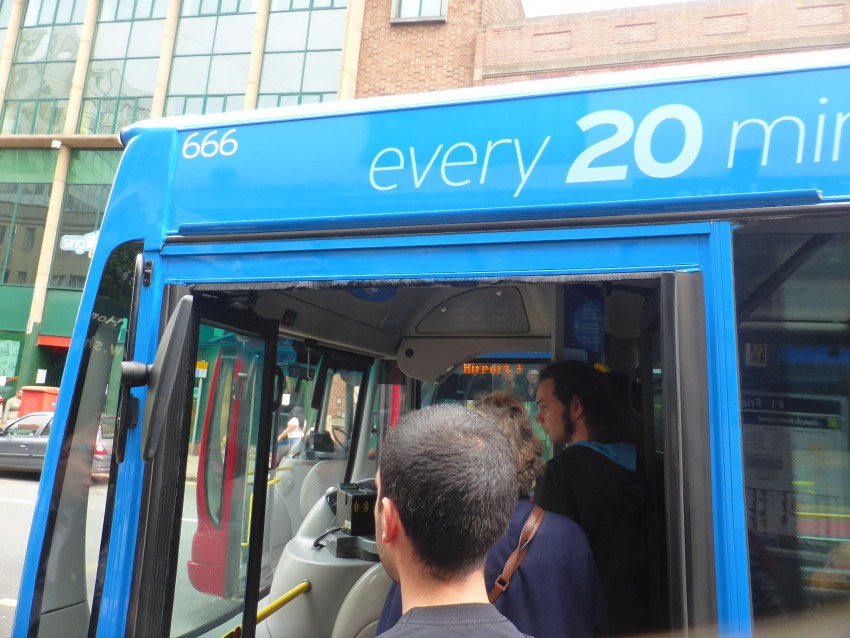 As if! The city bus we were going to take to get to Black Sabbath – numbered 666. Wow!

Sometimes you have to put a price on things I guess…  My price for this collection of fine rock and roll fused with heavy metal was £190 rather than £60 and rather that free. But, I would sooner have pay out the £190 and cut back to one meal a day for the next week than I would to have to live with myself for missing this music festival…

And, today is that Saturday. 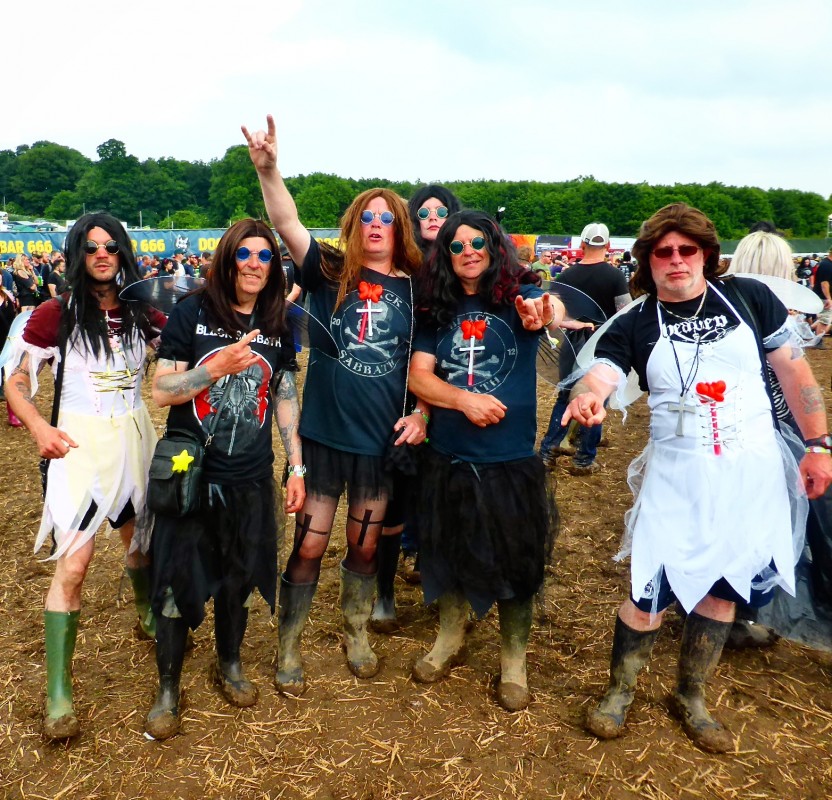 These guys! More ready than anyone for Black Sabbath.

Donnington Park is right next to the airport, and as you arrive there are planes taking off and flying above your head.  Dan says, “This must be the most metal festival in the world!”  I bet this is the biggest big-name metal festival on the planet… 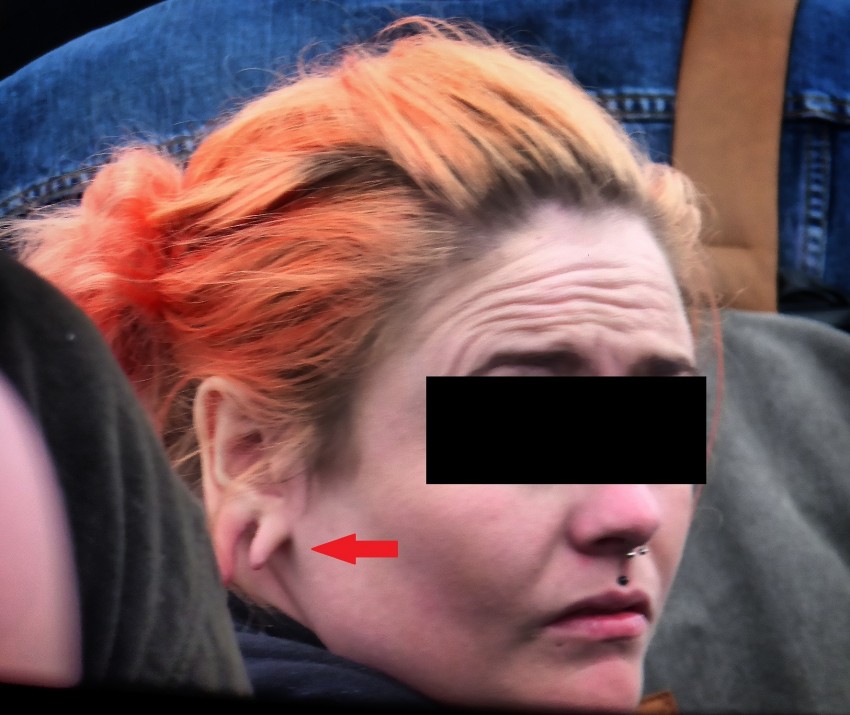 Friends, get those plugs out of your ears. Take care of yourself. Do you want to be the person that some journalist is trying to get a photo of because he can not believe how gross your ear is?

We arrived just in time for the start of Megadeth’s set.  I kind of want to meet Dave Mustaine because I want to see how much of a dick he really is.  I have never heard a kind word about the man and every time he says anything, I immediately think he is an idiot judging him by his words.

Megadeth ended up playing a great show, but I had a hard time getting into them because it is so easy to be critical of Mustaine because of what I think of him.  The man changes guitars for every single song.  It looked like he was wearing lipstick.  And in typical Mustanine fashion, he introduced a song with, “I wrote this one about the ex-wife of an ex-friend.  When she smells like spunk and it’s not yours, that should be a cue…  This song is called ‘She Wolf.’”  Meet fifty-four year old Dave Mustaine…

It was almost like we were watching a ‘biggest-douche-bag-in-rock’ competition. 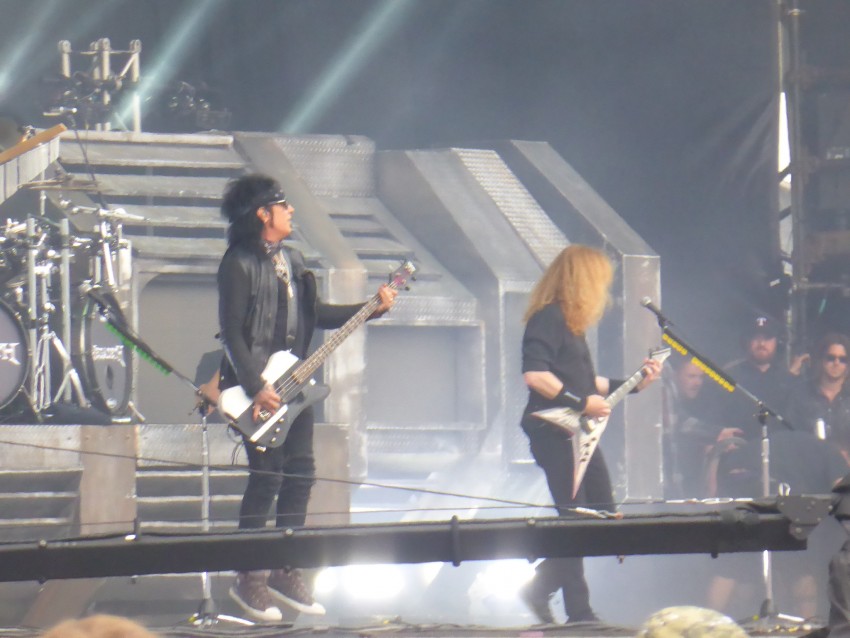 Nikki Sixx of Mötley Crüe and Dave Mustaine of Megadeth. Photo aka ‘The Douch-Bag’ off.

Megadeth brought out Nikki Sixx of Mötley Crüe to guest on a cover of the song ‘Anarchy in the UK’.  When Sixx was standing next to Mustaine, it was almost like we were watching a ‘biggest-douche-bag-in-rock’ competition.  If only Gene Simmons would have appeared from behind the curtains, El Power Trio de Douche would have been complete…  Either Nikki or Gene would have had to play the drums, but I am sure that could not have left them any less credible…

Steroids ≠ Jack Daniels.
The Megadeth show finished and it was truly a good show with a deduction of personal opinions.  But then, Dave Mustaine made an announcement for an award to be given out.  The award was called the ‘Spirit of Lemmy’ award, and it was given to…Triple H of the WWE, of all people.  Yes, a steroid-built wrestler was given the Spirit of Lemmy award at a metal festival.  Steroids ≠ Jack Daniels.  Triple H said he listens to metal and plays in a metal band, but it just seemed like a lot of malarkey.  A man who is famous because he was part of wrestling (which is basically a soap-opera for young boys and a sad group bachelors in their mid-40’s who are tired of watching porn) was given an award that represents Lemmy, a man who was the epitome of hard partying rock and roll…  Who makes the decisions on this nonsense? 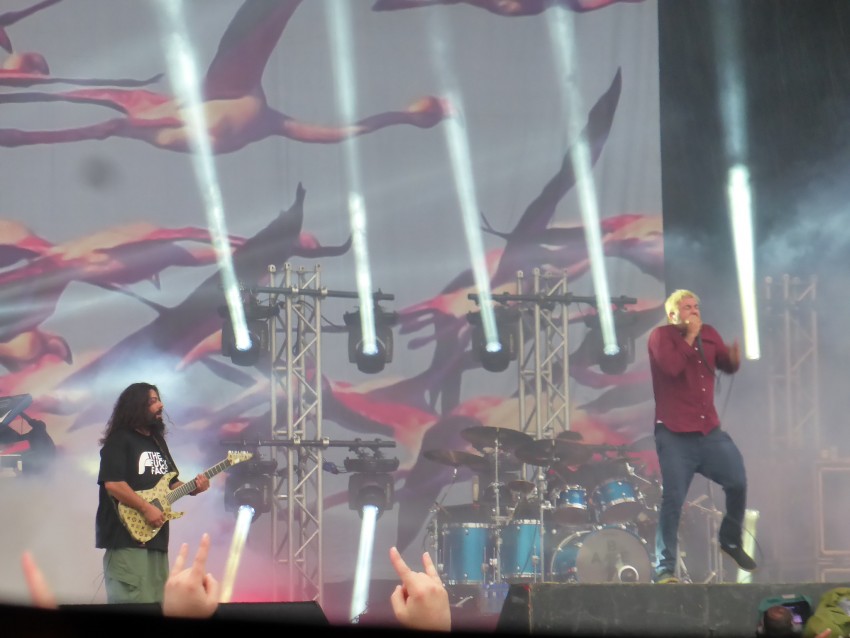 Deftones. Like Megadeth, they forget about that extra ‘a’ in their name.

Deftones took the stage next.  I would like to give Deftones an award for ‘Fattest Act at Download.’  They brought a great energy that I was not expecting for a few songs, but then they flat-lined once their metabolism bottomed out, and the show got really boring.  Those guys have wintered well…all four of them.

Then I heard a conversation in the crowd where a one guy said to another, “His foreskin is twice as big as yours.”  It was easily the most random thing I have heard in some time….

BLACK SABBATH!  I have been waiting for this day for five years.  It is the most important Saturday of my 2016 so far…  This is the day that I have been planning my entire summer around! 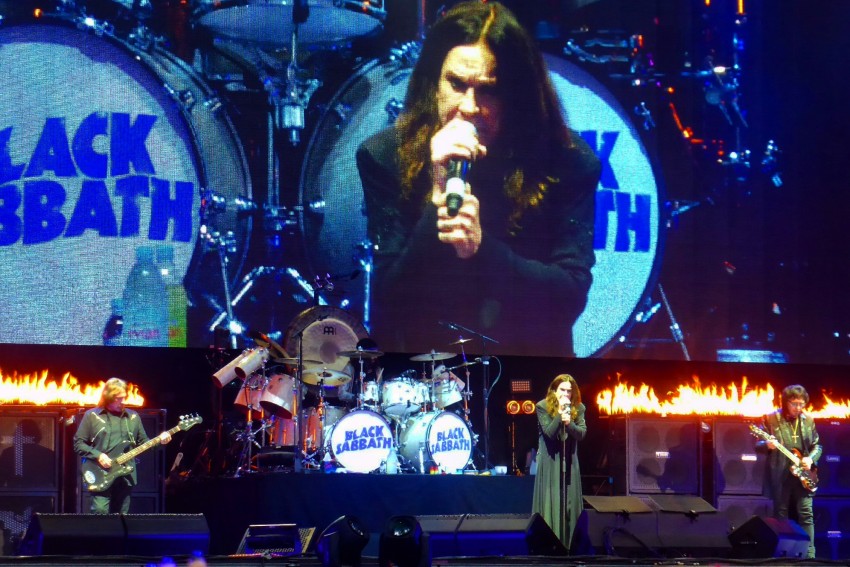 There they are! BLACK SABBATH!

The songs have changed a little.  The song ‘Black Sabbath’ was slowed down a lot, as was ‘Into the Void’, and Ozzy was off key through ‘After Forever’ as well as ‘Into the Void’.  But, then Ozzy found himself.  And it was Sabbath!  The band itself is super tight, just with Ozzy drifting off a little here and there, but the show was fantastic.

It poured rain down on us, but I could have cared less.
I was seeing Sabbath!

I liken 2016 Black Sabbath to the tires on a 1970 Plymouth Barracuda muscle-car that you want to drive again.  You drove that car as hard as you could through all of the 1970’s.  There is one pretty new tire on the car – 36 year old current drummer Tommy Clufetos.  There are two older tires that are wearing out in Geezer and Tony, but there is still tread on them and they still easily get you where you need to be.  Then, there is the other tire with quite a lot of wear.  That tire is Ozzy, and it howls with unaccustomed sounds as the machine moves, and there are wires hanging out that so you need to keep your eye on it, not push it too hard, and drive a little slower.  Meet Black Sabbath 46 years later… 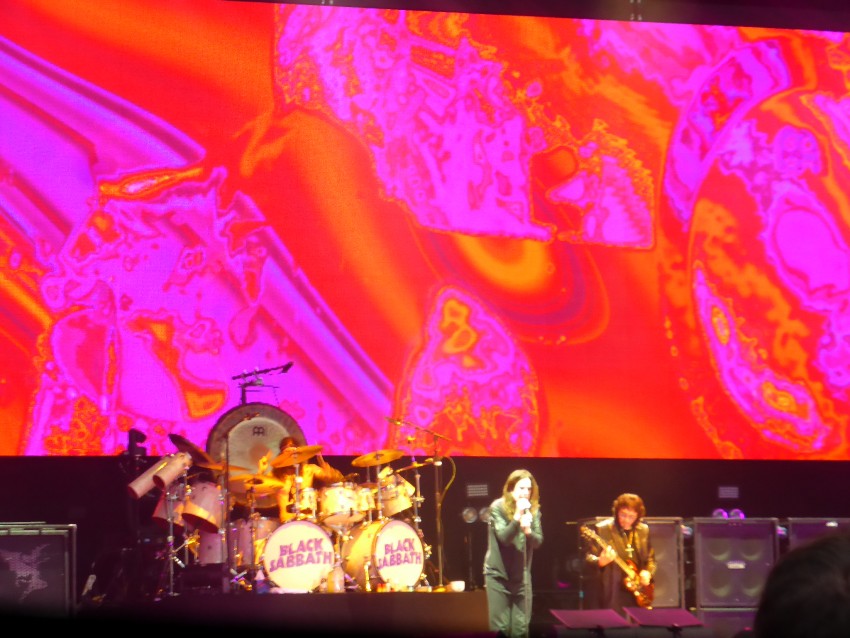 In the background of the stage, a screen showed footage from the 1970’s.  It sure makes me wish I could have seen the band in about 1973 when they were really peaking!

Ozzy found his vocal form a few songs into the show it was just so great to see him on stage.  Ozzy is a little bit like a senile old man, and he kept on yelling in slur, “I want to see those fucking hands in the air,” during every pause in his words.  He must have yelled that 50 times through the show.  He is a little annoying, but he is still Ozzy Osbourne and it is hard to not love the man.  When he would talk to the crowd, I would only really understand about ¾ of his words, but that is what I knew I was coming to see.  I am happy to take Ozzy in any form, just to see the show with him.  He even told us, “I love you,” a few times.  Dan and I were in that ‘You’ crowd.  Dan said, “He loves ‘us’!”

They played ‘Fairies Wear Boots’, my favorite Sabbath song.  And later, ‘Children of the Grave’ rocked so hard that I got lost in it.  It was fantastic.

The show finished in encore with ‘Paranoid’ and flames. 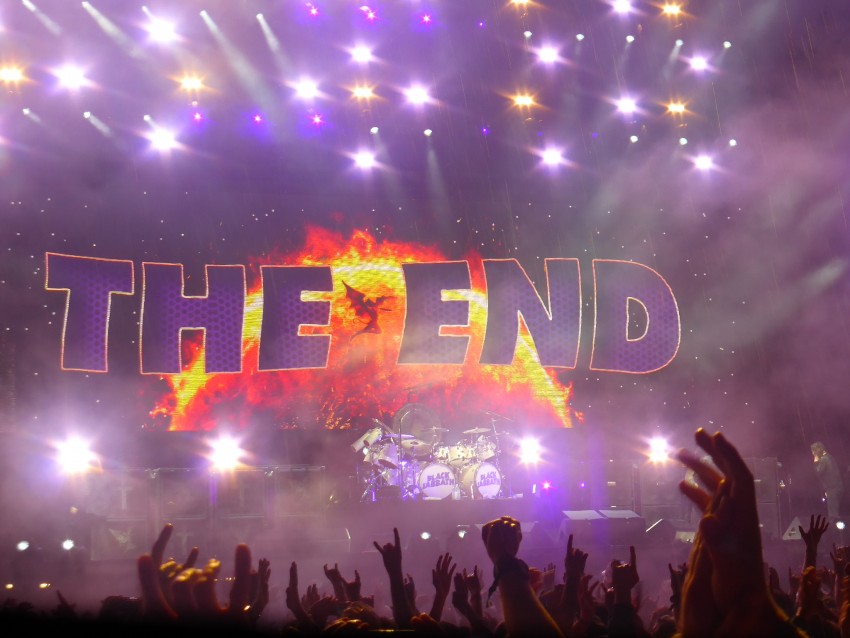 Yup, it is over. Really. But I sure and glad I got to see it. Thanks gentlemen. 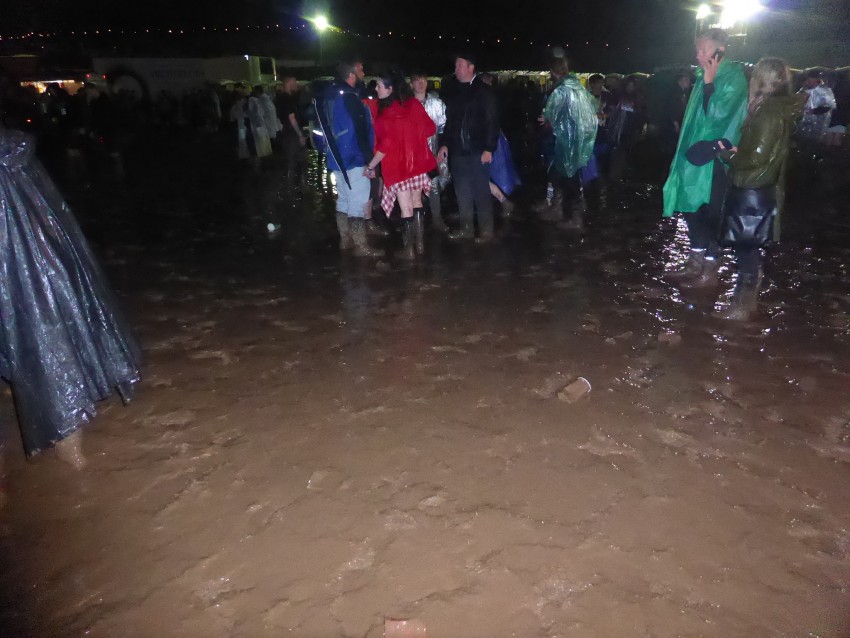 It really happened and I finally got to experience that in my life…  Sabbath!  Finally.

We made our way out of the mud and the slop with the crowd towards a bus that would take us back to Nottingham.  The bus broke down on the way and we were transferred to another.  Our friend Shanks went home, Dan and I got food, a beer in a dodgy pub, and made out way back to his house to go to bed.

We were cold, wet and tired… 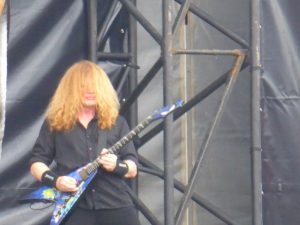 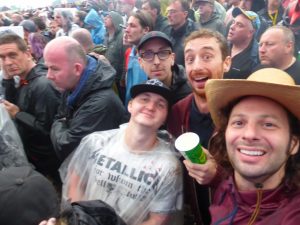 Shanks, Dan, a typical jerk-off who thinks he needs to be remembered, and myself. 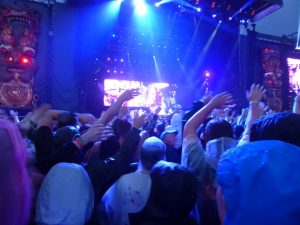 Ozzy yelling, “Get your fucking hands in the air.” 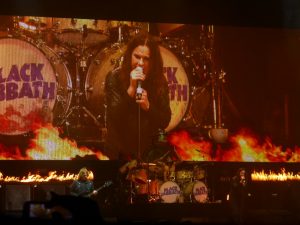 Black Sabbath in action…with flames behind the Prince of Darkness.

“Filipino girl in bar – “My mother has more than 13 cats, some goats, chickens and a pet crocodile. My mother is wondering, 'Where is my cats and chicken?' Of course we know…it is in the tummy of pet crocodile. The crocodile eat fast!””
— Tagbilaran, Bohol, Philippines
[View All]