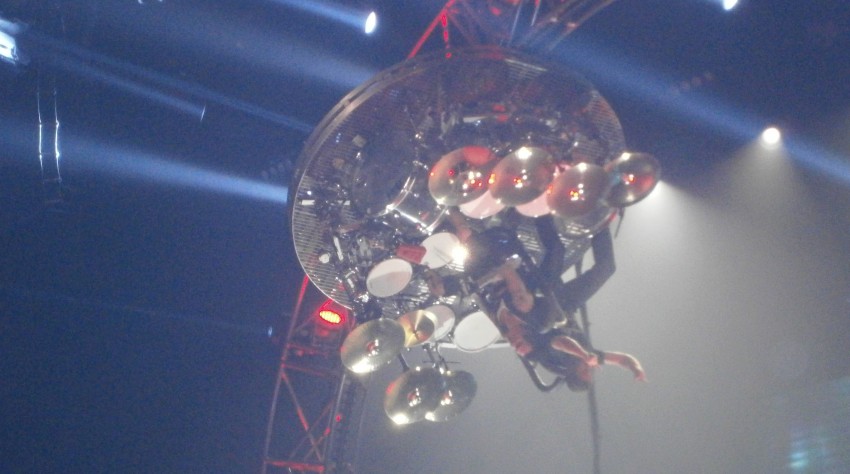 Well, there are very few things I like to do more than attend rock concerts.  My favourite thing to do in the world involves a girl, but my second favourite thing to do is to rock out at a concert.  So, when a show comes up, I am usually in attendance.  In September, tickets for Steel Panther, Mötley Crüe, and Def Leppard were released for sale here in London.  It was a no brainer.  I was online in the morning one minute after release and on the hunt for tickets.  I could not find the London gig at Wembley Arena, but I found the Manchester gig at Manchester Evening News Arena, so I bought two floor tickets for an excuse to visit that city.  Then, upon perusing the website some more, I found the tickets to the London Wembley Arena show so I bought them as well.

Well, the dates came up and my friend Carlos and I headed to Manchester.  We went to the Hard Rock, and had a great time hanging out with our ‘cousins’, and partied very hard in their city.  We managed to pull ourselves together the following night for the Steel Panther, Mötley Crüe, Def Leppard gig.  The gig was great, but we were in disastrous shape, and our bodies were nearly unresponsive to our old friend Jack Daniel.  It is a long and adventurous story, but that concert is not what this story is about.  That is just the background needed for the second part of the story.

We returned to London the following evening, just in time for our evening shift at Hard Rock.  We requested all of the Mötley Crüe and Def Leppard songs we have in the system for the evening.  By rock fate, at Carlos’ table was a couple from California who told us they were in town for the Steel Panther, Mötley Crüe, Def Leppard concert to take place in Wembley two nights later.  We told them a little about the show in Manchester we had just attended.  They asked us questions about it and we told them how Steel Panther had stolen the show.  As luck would have it, they were very pleased to hear us say so and told us they had flown into London because they were friends with Satchel, Steel Panther’s guitar player, and used the concert as an excuse to come to Europe for the first time.  We visited, made friends, and they took my phone number in hopes of the chance to introduce my friend and I to the band.   Awesome!

Two days later, my friend Manfred and I went to Wembley arena, and the California couple were sending me texts, and hoped to meet us inside the venue.  We had floor tickets and went to the front of the stage, next to the ‘backstage pass’ entrance.  The couple came out from the backstage entrance with their backstage stickers stuck to their shirts, found us, and hung out with us just before Steel Panther came on stage.  With the couple was Satchel’s brother.  It was pretty awesome to be standing next to the brother of the guitar player on stage who writes all of those lyrics and the music that 12,000 people were enjoying with us.  I asked him if it was the biggest show he had ever seen his brother play.  He confirmed and showed me the goosebumps on his arms.  That gave me goosebumps.  The show was incredible.  Steel Panther are very funny guys.  Their songs are over the top and their comedy act between songs is pure raunch entertainment.  They say things that every man wants to say, but never says aloud for fear of scandalous looks and female persecution.  Steel Panther rocked.  I am going to cover their ‘Community Property’ to sing and play at parties when there is a guitar laying around to entertain those sitting in close proximity.

After they finished and the set change from Steel Panther to Mötley Crüe was taking place, my friend from California slapped his backstage pass sticker on my shirt.  Then he told his friend to take off his backstage pass and give it to Manfred so that we could go back and look around together as the sets changed.  His friend looked at him like he was crazy and was not even considering sharing the backstage pass with us.  Our buddy said, “They are not going to run off…  Fine, go one at a time then…”  So, I went for a tour of the backstage.  I went on the stage and was standing near the middle of it and there were 12,000 people in front of me.  That was a crazy feeling.  Then I walked around on the stage, and walked behind Steel Panther’s stage drop to the Mötley Crüe section of the stage.  I went up to Tommy Lee’s drum kit and took some pictures of it on its revolving-circle-roller-coaster.  I walked around and took pictures of their guitars and just watched the Changing of the Guards that was taking place from band to band.  It is sort of freaky back there and you never knew who was who and who was going to tap you and the shoulder and say “Hey, who are you?” “Me, I am Nobody.”   “Well, Nobody, we will be throwing you out now,” and then get kicked out the venue and lose our friend’s backstage pass and he wants to kill my friend who is waiting with him when I do not return.  So, I eventually headed back to the ‘common-folk’ area so that Manfred could have a go back there.

Manfred returned and Mötley Crüe came out.   They stared with a bang.  They sounded great.  However, the show did not hold up.  Vince Neil cannot hold the high octaves anymore and his voice falls through them, and Mick Mars is very frail.  Suddenly Manfred said to me, “Holy man, I ran into Mick Mars backstage.  I seen an old hunched over man being escorted to the stage because he could harldy walk, and now I realize it was Mick Mars.”  Mick was having trouble with is parts at times, and he played out of key sometimes, and at one point we could hear Tommy screaming “Stop!  Stop!” at Mars from his drum riser.  They played ‘Home Sweet Home’ and I was surprised to see that Tommy Lee plays the piano in that song.  But, my opinion of Mötley Crüe fell apart during the show.  They were barely holding it together.  Tommy’s crazy upsidedown drum solo featured a dude he picked from the crowd to come and ride with him.  Basically, all Mötley Crüe did was swear and cuss.  They could not string sentences of more than 6 words together in a row. Thirty years of cocaine, heroin, and alcohol has burned those guys out.  The best part of the show was Manfred singing, ‘eating in the dish-room’ as a reference to misbehaving at work for the chorus of ‘Smoking in the Boy’s Room.’  Nikki Sixx was spitting water on the crowd in front of him, and then he came out with a camel-back on, and we spitting pre-loaded blood red water on the crowd, over and over again.  At the end of the show they threw buckets of blood-red water on the crowd in front.  Really, are you guys not 50 years old…?

Steel Panther were cool and funny and they made Mötley Crüe look like burned out bullies.  Then Def Leppard come out, and were such consummate professionals that they made Mötley Crüe look like total losers.  Our American friends had told us that there had been some animosity between Steel Panther and Mötley Crüe because Mötley Crüe were jealous of the crowd’s reaction to Steel Panther on the tour, and how Steel Panther had become the raunchy darlings of the tour.  Unlike Steel Panther, Mötley Crüe’s banter between songs was like a script from the previous show. They ever swore in the same parts of the same sentences.  I had always wondered if bands altered what they said from show to show.  Mötley Crüe were seemingly incapable of alterations.  Their brains probably likely cannot think fast enough anymore to provide alternate banter.  Perhaps this is why old bands are seldom able to create successful new music.  Def Leppard headlined, and they were great.  They played 8 songs off of their Hysteria album, which everyone owns or has a friend who owns the album.  Nearly everyone in the crowd sang along to every song that they played.  They were such a tight outfit and such a well groomed machine that sounded exactly like their records do.  They were just spot on through the whole show.  Their setlit in London had varied from the setlist in Manchester.  They just kept on pumping sing-along hits out.  Rocket, Animal, Women, Hysteria, Pour Some Sugar on Me, Photograph, Let’s Get Rocked, Two Steps Behind, Bringin on the Heartbreak.   They were just totally awesome.

After the show we were waiting around for our California friends, who had disappeared backstage after the Steel Panther set, to see if they were coming to find us.  I was chatting up a breast heavy blond who told me she had been to the Def Leppard ‘Adrenalize’ tour when she was a young girl. Security was hassling us to move to the exits and leave.  I lost her, and Manfred and I headed upstairs in the venue, but security cleared us out of there too.  It was the last night of the tour, and I was afraid that the bands would want to party together before they all went home, and I really wanted to party with them.  Manfred was not really feeling it and wanted to go home, so I reluctantly headed for the Tube with him.  I hoped my cell phone would not ring as I got to my house to tell me that everyone was at some bar and that I needed to get there, and I would have to re-motivate my de-motivation at having to go home.  Luckily, I heard nothing until the morning when my friend from California sent a text to tell me that after the show he just went to a pub with Satchel and Satchel’s brother for a drink and then they went home.  I was freaking relieved.  I had not missed a massive rockstar party after all…  I guess those guys really are partied out…. 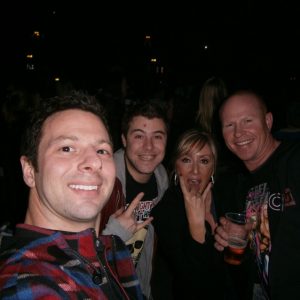 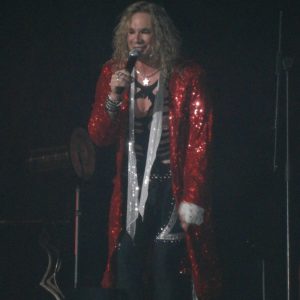 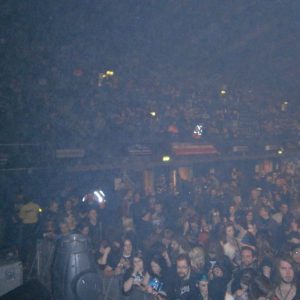 How the crowd looks from the stage. 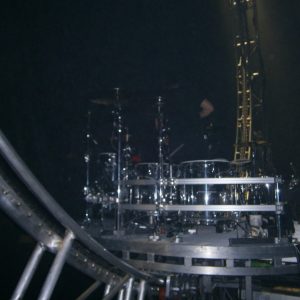 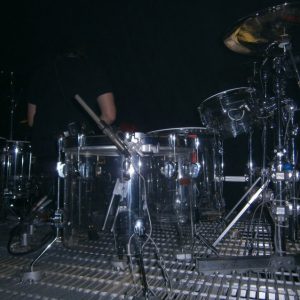 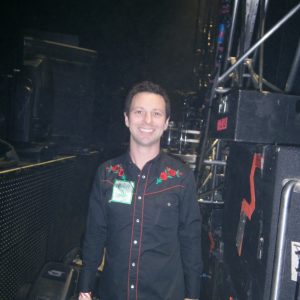 Backstage with a fancy pass. 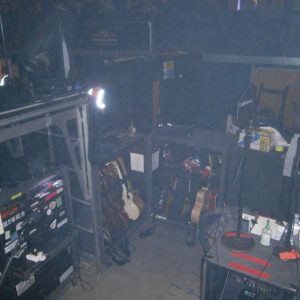 It is pretty cool to be back here. 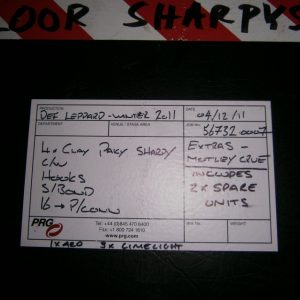 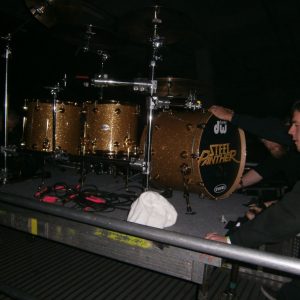 Changing the stage behind the curtain. 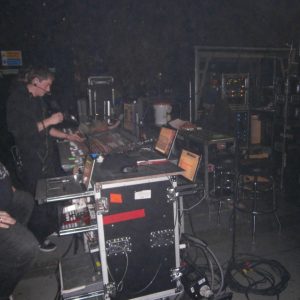 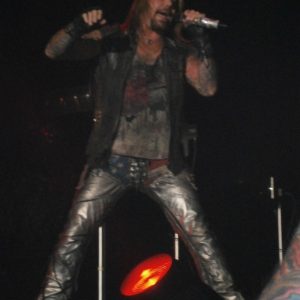 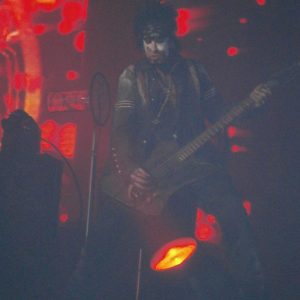 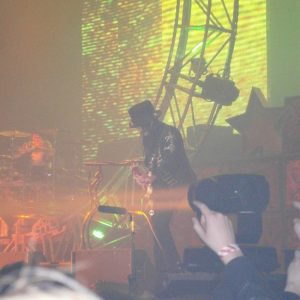 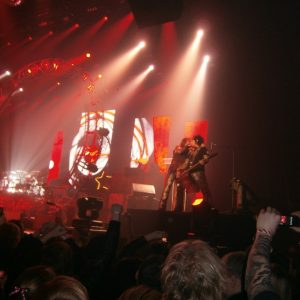 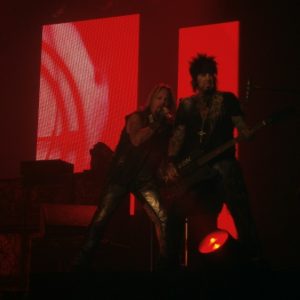 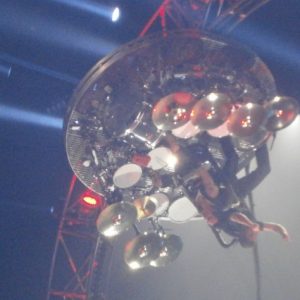 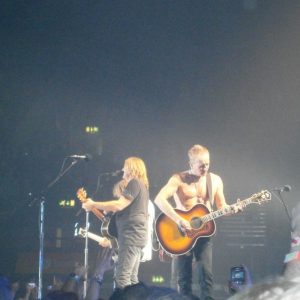 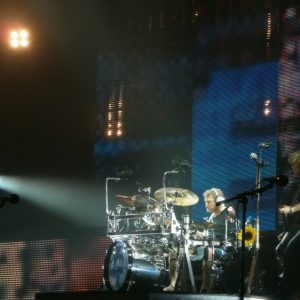 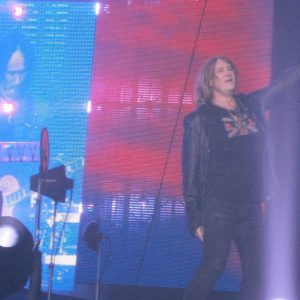 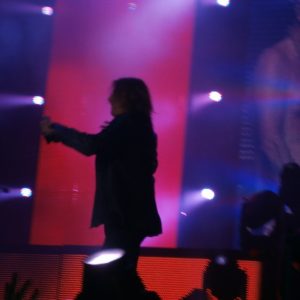 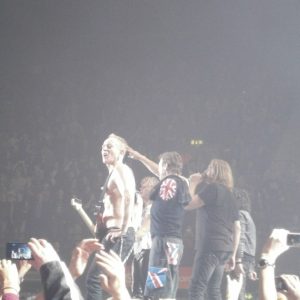 “Close to a town called Tsumeb is the Hoba Meteorite, which is the world’s largest meteorite.  The meteorite was discovered in 1920 and it weighs 54,000 kgs.  54 tons!   It is a big hunk of minerals such as zinc, copper, gold, lead, and any other product that my guide could think of to name.  I was there in the evening as the sun was setting, but he told me that no matter how hot the sun it, the meteorite always stays cool. It is estimated that the meteorite fell to the ground about 80,000 years ago.  Just imagine the impact and the thud when a 54 ton rock fell from space to smash into the earth!  According to my guide, a 10 ton meteorite fell to earth last year not far from where this one had landed.  He told me, “Locals thought was big bomb coming down.  They run.  People are afraid.  Not know what happen.””
— Hoba Meteorite in Namibia
[View All]