June 10
I was up at 06:35 to get ready for the day.  It has been over a month since I was near a time like that.   I caught my 08:30 bus to Nottingham to meet my friend Dan.  Download Festival.  I have wanted this festival for five years now…

‘How Cool Nottingham is’, seemed to have slipped my mind in the past 14 months.  It is a great little town.

Nottingham is free of the shackles and the extortionate prices of my monster, London.  And believe me, I love my London, but it is actually a treat like a vacation to another English city where everything seems ‘lovely’! 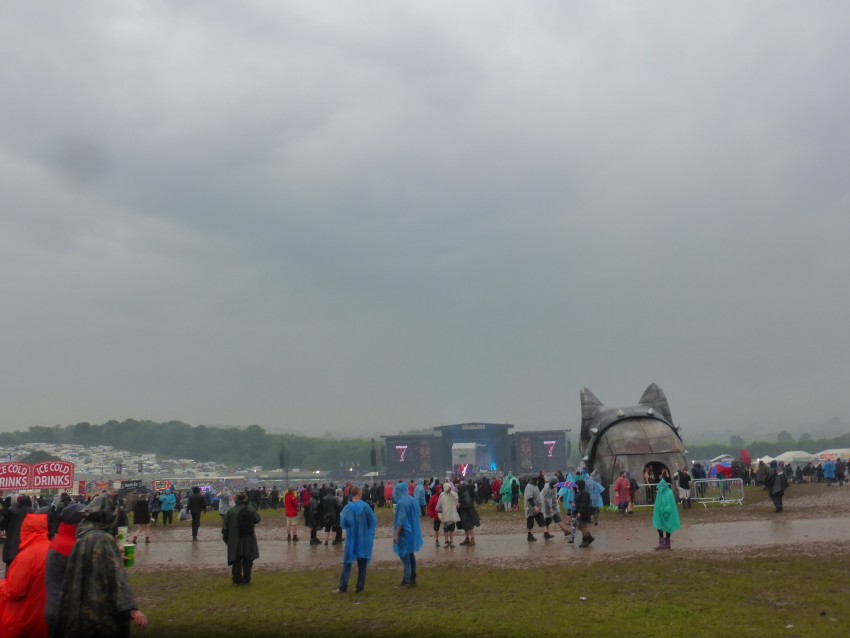 “What part of ‘No’ do you not understand?!”
My friend James drove me to Download Festival which takes place at Donnington Park, close to Nottingham.  It took us three different tries to get to the right gate but when we finally found it there was no place to pull over and stop.  When we came upon an approach, a security guard was standing there waving his finger at us to say that we could not park our car.  He said it was an emergency vehicle escape access and said that we needed to move.  So, I said goodbye to Warring as he was backing up and jumped out of the car.  As I did so, the security guard yelled at me in a Scottish accent, “What part of ‘No’ do you not understand?!”  I said, “I am just getting out of the car.  It takes the same time for it to back out if I am in it or not,” and I walked away to him steaming.  Give a man a neon-green security-jacket and he develops a new asshole, right not top of his neck…

I could not find a scalper to buy a ticket off of and it was raining pretty hard.  So, I had to shell out the £190 for the weekend pass.  That is only $380 of my money.  The weekend had better kick ass for that! 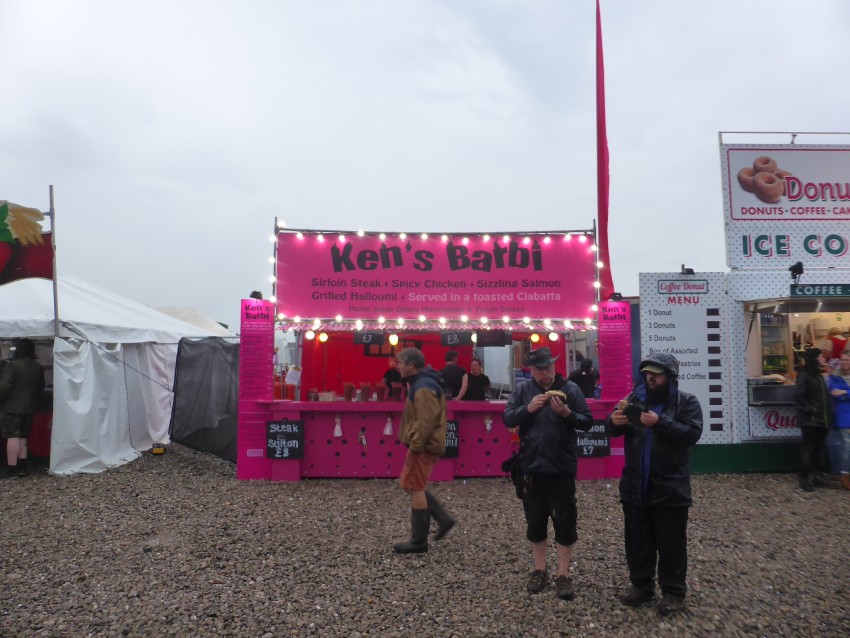 As soon as I got inside of the gate, a really fat man leaning against a wall was wearing a shirt that said ‘Salad Dodger’. Awesome!
Dan’s band-mate Shanks was already at the festival and he came to collect me as soon as I found a meeting point.  We blagged our way into the RIP tent,(which I did not have the proper colored wristband for) as Shanks created a distraction with the security girl and I passed on through.  Sweet!  One fast beer to make some hellos. 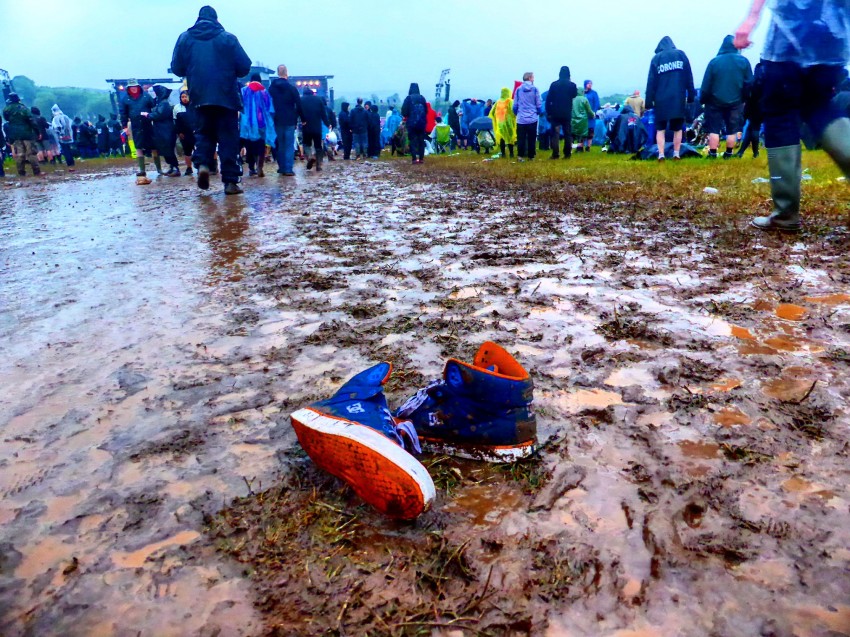 The entire festival area of Download had become one giant mud-pit.  Mud was nearly ankle-deep everywhere…  Once you sink your shoes in it the first time, it really can not get any worse, so you just have to accept it and enjoy life.  You really do not have any other choice.  Plus, you are at a metal festival.  It is a good place to stop being such a pussy!

Germans are a great mix of weird and cool.  Rammstein are exactly that mold.  They are Germans, that is for certain! 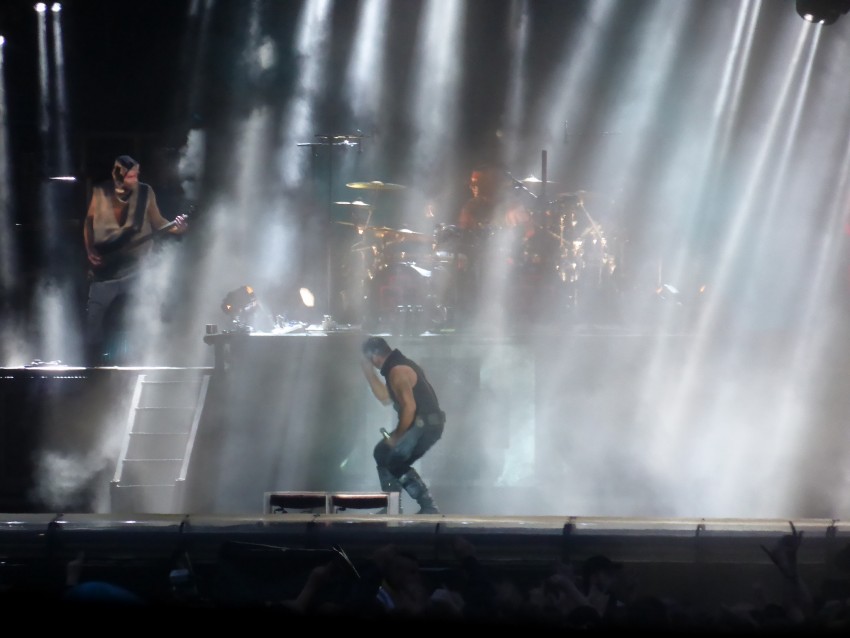 The show was fantastic.  For the song ‘Feuer Frei’, the guitar player and the bass player went to the side of the stage mid-song and came back with fire-breathing face masks and they were blowing out flames from their faces.  They were shooting four-meter flames towards each other in the middle of the stage where the flames would meet while they kept on playing music.  It was crazy!
Rammstein is wild. The music just kind of grabs you by the testicles, drags you along and makes you scream out crazy things in German and you do not even know what those things mean!
Rammstein are all about smoke, pyrotechnics and testosterone, which there was plenty of through the entire show.  It was a great performance, and I assume that the music was great as well, but the show is so fascinating that it is difficult to recall how many members are even in the band.  The screens to the sides of the stage that showed the band as they were playing had a retro filter that the video ran through, which made it seem like to the audience like they were watching an old German movie.  The entire theme is great.  Plus, the guitar player had some kind of arm device the shot fireworks out of it while he played.  What else do you need?!

The lead singer went to collect the keyboard player who was wearing a leash which the singer grabbed so that he could lead the keyboard player to the middle of the stage as a slave.  The keyboard played crawled on his hands and knees as if he was a dog that was being lead.  He then disappeared into the middle of the stage and when he came back he was wearing a fitted shiny suit that made him look resemble a human disco ball.  When get got to his keyboards again, there was a treadmill in place that he walked on as he played the keys. 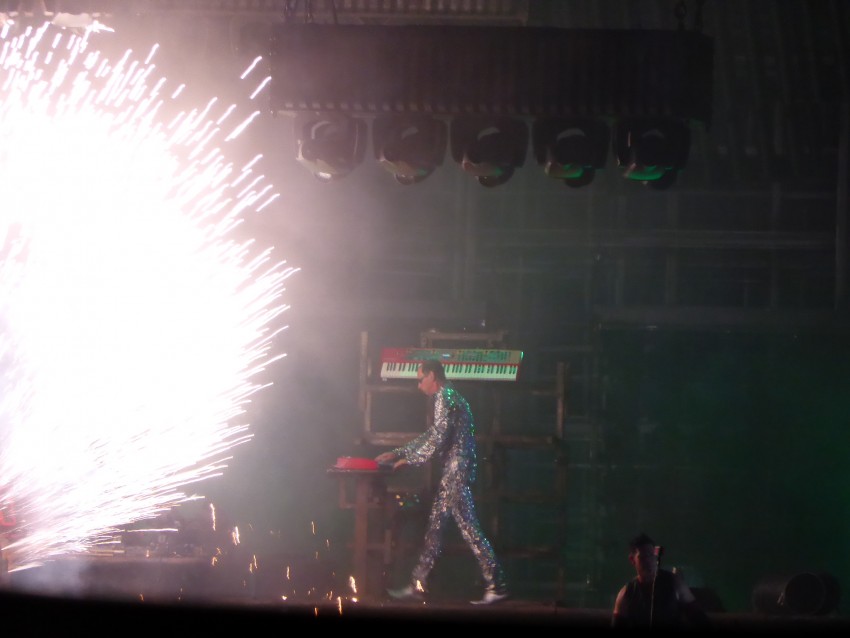 A human-disco-ball suit, on a treadmill while playing keys.

Everything described took place as the band kept on making music.

The band show fireworks straight out from the stage.  The sound area was shot fireworks back at the band.   It was crazy. 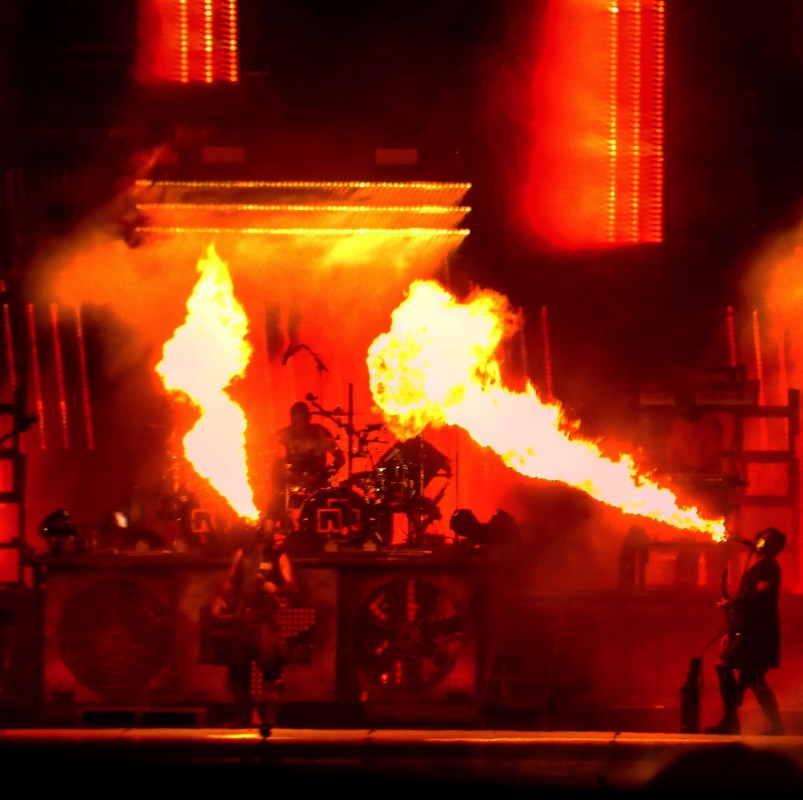 The song ‘Feuer Frei’. Does your band have musicians who put on masks mid-song which allow them to blow 4 meter fireballs across the stage towards each other as they play? No? Oh, Rammstein does. Welcome to one of the craziest shows you will ever see!… 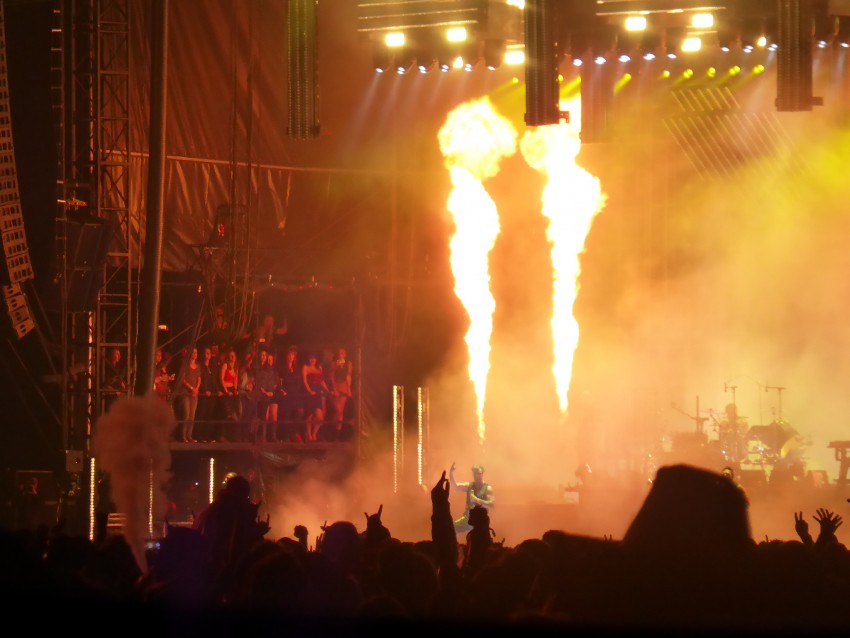 It appears he is unleashing fire on command from his hands here.

It is amazing that a band which sings in German, a language that no one other than German speakers can understand, have cracked the alternative-mainstream. 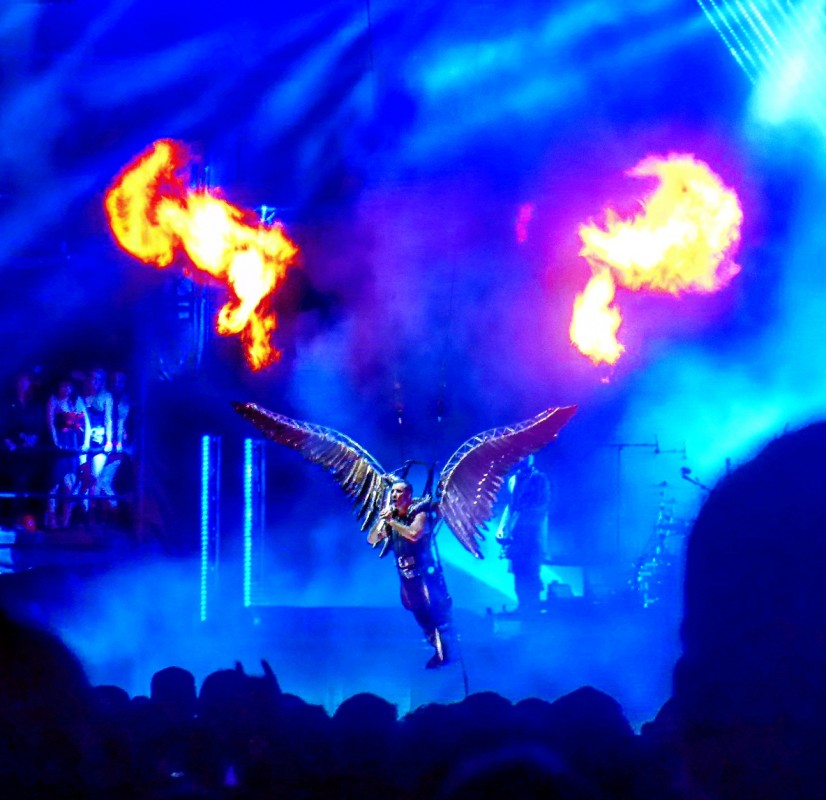 For the encore ‘Engel’.

* My friend Mike thinks that there should be a test where the levels of testosterone in a man are tested before a Rammstein show and then again after to see if they change.  That is a fascinating idea…!

After the show, Shanks and I caught the Skylink bus back to Nottingham for 5.  Shanks told me, “Beave, you are almost like a season.  You show up…it is Beave season!”  Thanks buddy!

We got to Nottingham I was walking alone towards Dan and Emma’s house and a blond woman in her mid 40’s who was talking on her phone smiled at me as we were about to pass.  I thought it was friendly of her so I smiled back.  About 7 meters past her when she turned around and asked me for a cigarette.  I told her that I do not smoke.  The she asked me, “Do you want business?”  “What?”  ‘Business?  Ahh.’  “Oh.  No.  No thanks!”

Prostitutes frighten me.  I thought she seemed a little too friendly. 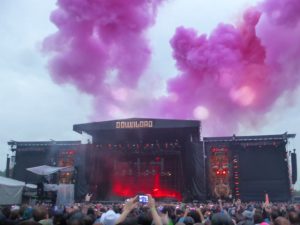 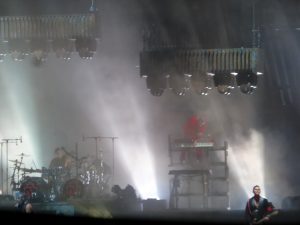 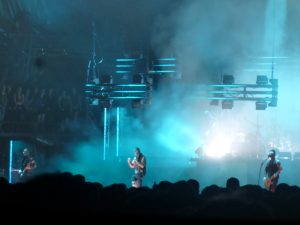 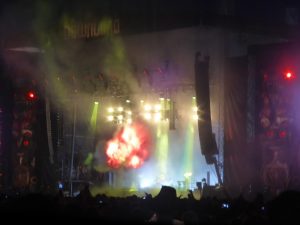 Ball of fire in the middle of the stage. 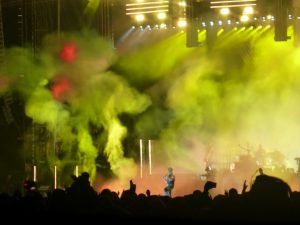 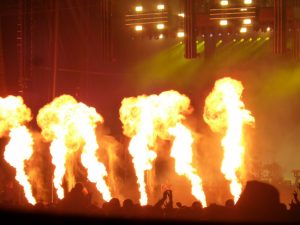 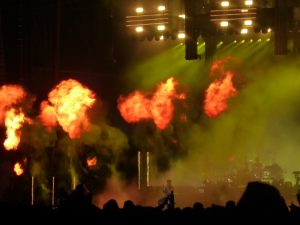 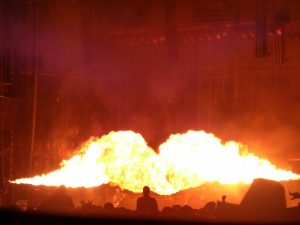 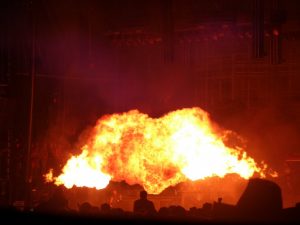 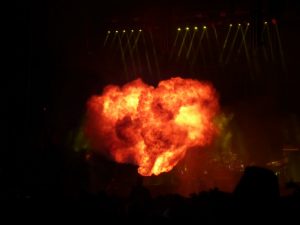 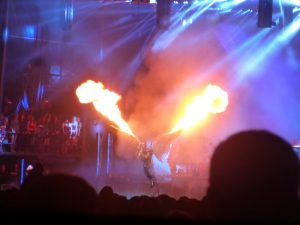 “I love it how in at least half of the bars and venues I visit in Edinburgh have no mobile phone coverage inside. So, people are not on their phones in many bars and clubs. It is old fashioned and people talk to each other. It is sort of like smoking now, and people go outside of the venue to get mobile coverage to send a message or receive one they are waiting for, and then they come back into the venue to socialize. My friend used the term 'Social Admin' yesterday - having to deal with 10 messages from people while you are out with your friends…”
— Edinburgh Fringe Festival
[View All]