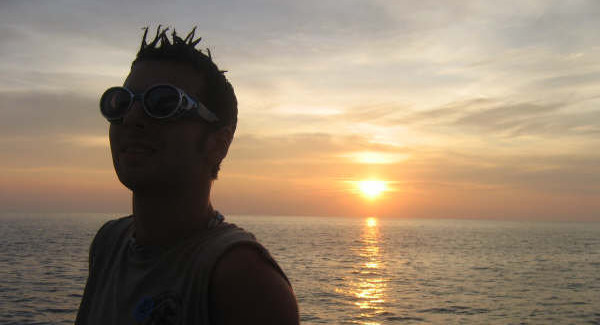 My friend Mike and I were backpacking down the coast of Vietnam, living cheap, living well, and partying hard. It was pretty awesome for me to have a friend from home come to meet me in Asia to add a little culture to his life. Mike made plans for the sights he wanted us to see on our journey. I hunted for women.

It had been a year since Mike and I had seen each other, so we traveled for two weeks in a blur of alcohol, complained daily of our excessive drinking as we were tired of being tired and hung over, only to start again by having a drink at dinner as neither wanted the other to think he had turned into a pussy. And so the vicious cycle carried on for the first leg of our journey. We lived like fresh rockstars for our first couple of weeks.

Our bus and motorcycle journeys eventually lead us towards the bottom of the country to Saigon. By that point, Mike was a little embarrassed to be in public due to the 100-150 bed bug bites he had all over his body, including his face. Mike had also taken in some bad chicken at a beach barbeque, and had endured a five hour bus trip on a vessel with no toilet while some hostile stomach cramps made his life miserable. Once we scored a $5 hotel in Saigon, Mike busied himself by fighting what sounded to be a full scale battle in the bathroom. At the time, we were still about three days from being able to remove the dental floss stitches in his left hand that he picked up in Halong Bay after an incident with some sharp, slippery rocks and a very old doctor in a back alley. Mike had some healing to do. He decided he would stay in for the evening.

I was still fit for fun, so I decided to venture it alone as a night passed up in a new city might be an opportunity missed and perhaps I could charm some Saigon ladies. I had asked enough questions throughout the day, and the best feedback I settled on was a nightclub called “Gossip”, close to the tourist area of Saigon but not polluted with tourists. It was supposed to be Saigon’s club of choice on a Wednesday.

The sun disappeared, the evening came, and I entered the place to find that there were about 200 Vietnamese inside of the club, and me. I did not know where to start my night, so I headed for the bar, found a stool, and ordered a beer as it is always easy to make a bartender your friend no matter what languages you may or may not speak. I was quite interested in kissing one of the Vietnamese Saigon ladies.

Sitting on my stool with my back to the bar so I could look around, I noticed a saucy little number directly to my left. She was sitting next to her female friend. I looked, made eye contact, and said “Hello.” That was all it took. By the time I had finished saying the ‘o’ in hello, she was almost on my lap and practically on top of me. Her arms were around my neck and we were looking at each other’s faces. I thought to myself, and possibly aloud, ‘…Wow, that sure worked fast!’ Usually having to scratch and claw my way for everything I get and then pretty much having this one at ‘hello’ was new to me. After a moment of further inspection, I realized my new friend was completely stunning. She was gorgeous. 21. Maybe 90 lbs. Perfect teeth. Her smooth complexion made her face seem very delicate and she was wearing a silver blouse, sleek white form fitting pants, noisy black dress sandals and had long black hair half way down her back. I do not know if I could have found a cuter girl in the club to try to meet. The luck of the draw sometimes….

She could not speak a word of English, so we flirted and scraped by using hand signals, actions, and drawing pictures for each other with a pen and paper. It was going very well. Her hands were on my face, my neck, my thighs, my knees. She stood between my legs as I sat on the bar stool and sometimes she straddled one of my legs. There was no scale to measure how much I was enjoying myself. We were whispering sweet nothings into each other’s ears. Mine in English and hers in Vietnamese. I still remember the heat of her breath in my ear. It was more attention than I could have ever asked for.

I got it across to her that I was going to be heading to Cambodia the following morning. We were laughing and teasing … joking about how she might run away with me. Maybe we’d fall in love. Maybe we we’d marry someday. She drew a picture of us at the altar. It was all a really nice thing we had going on, this little beauty and I. Her hands were all over me and I cannot remember which I liked better; the way she felt or the way she felt me. We had been busy with this behavior for about an hour. I had thought about kissing her, but decided to hold out until I was 80% confident in my move. She sure was revving me up and the message her eyes sent was making the hair on my arms tingle. Of course, the idea of Saigon ladies had been on my mind, but I had no idea that the night and things were going to build up like this!

Suddenly a Vietnamese man came to the bar and sat down about three stools away from me. She gave me the ‘just a minute’ hand gesture and walked over to him. I was initially a little irritated by this obstacle. I have never been one to put up with much bullshit. Some time passed…. Then about five minutes passed…. I decided I had been patient enough, and I got up with the intention of seeing if there was anything of any interest closer to the dance floor. When I glanced over at her, she gave me the ‘just another minute’ look and hand gesture, as she continued speaking to the Vietnamese man. I gave her the ‘I’m sorry, but you blew it’ face and headed for the center of the club.

I stood in the middle of the venue for a short while wondering if I should have been so harsh to the little beauty, and thought that maybe I should get myself another beer to think it over…

It was then that I reached into my pocket with my hand and realized something felt wrong. In an instant, faster that I could think, my hand made a sharp shove into the deepest depths of my pocket and absolutely confirmed for the rest of me what a flash of my consciousness had already realized a instant earlier…  My pocket was empty! It was the very next moment when my brain realized that the 500,000 dong (about $30) that had been in my pocket was no longer in there, and it was during the next nanosecond that I looked towards the bar and noticed she was no longer standing where I had left her…

I have heard of that kind of thing happening to guys before, but was certain it only happened to idiots… I know my money was rolled up at the very bottom of my pocket, half way down my thigh. I checked again. Yep, it was really fucking gone! Holy shit! It must have taken her all of that hour to get those bills to the top of my pocket and into her hand. I looked again to where she was sitting, and yea, she was really gone. It had really just happened the way my mind had just thought it might have. I looked again and noticed the Vietnamese man was gone too…

Well… I had just been had…but it was some of the best work I had ever encountered in my life. To my surprise I was not even mad. I was shocked and dumbfounded but had no anger in me. I started smirking at it all. I had thought that I was the spider, but in fact, I was the fly. How she got that money out of my pocket without me ever noticing, I will never know for sure. The craftiness of her playing two hands and my inability to notice her left handed move when I was focusing on her right handed work was impressive. Sneaky, sneaky little hot 90 lb Vietnamese thing. After pondering the situation for about another ten minutes, I left the club to go back to my hotel. There was nothing left for me to do except smile and walk myself home.

When people are exceptional at what they do, you just cannot help but marvel at them, no matter their field of work. I was too impressed to think anything else. Sneaky, sneaky little thing.

And that was as close as I came to kissing a smoking hot, 90 lb, sweet and innocent looking Vietnamese con artist. My own little Miss Saigon. I thought she had been coming on a little strong…

“Me - "How has your relationship been?" Friend - "I like her.  But I always feel like the guy left out when my friends talk about how much they hate their old ladies...so that sucks..."”
— A Friend From Home
[View All]