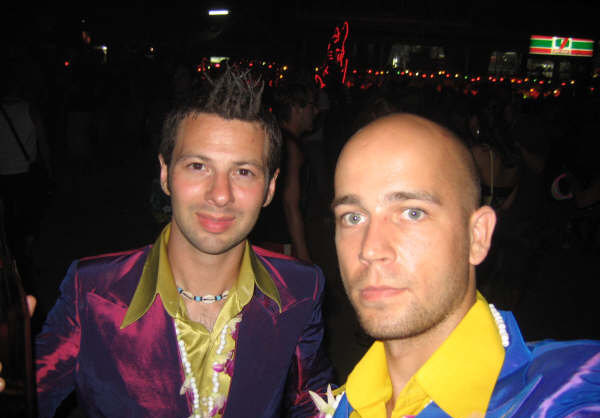 Thailand is just about the exact place I had heard tales about. Everyone who has ever been there has a fable of their own. After visiting Thailand, I am convinced that most of the legends I have heard about drugs, parties and prostitution are probably true. This is my account of the naughtiness in tropical, beautiful Thailand….

My friend Mike and I ended up on the island of Koh Samui, in southern Thailand, just before the monthly Full Moon Party about to take place on Koh Phan Ngan, the next island over. The story starts with a beer for lunch, which was probably way earlier than was actually necessary because of our ‘never say stop’ mentality. By the time we should have been eating dinner, we had drank enough that we had both slipped into full party mode and had bought tickets to the Moi Thai kickboxing fights to take place that evening at Chaweng Beach, the party center near the top of the island.

We went back to our guesthouse to clean-up, and backed by the strength of a large volume of liquid courage, there was no doubt that we should introduce Koh Samui to our flashy apparel. A couple of weeks earlier Mike and I had crazy three-piece suits tailor made for us in Hoi An, Vietnam. Mine was metallic purple and Mike’s was metallic blue and they made each of us shine like a sun in the night. We looked like party-crazy millionaires in the suits that ran us $33. Nobody walked past us without following us with their eyes.

We had ringside seats at the kickboxing fights, I smoked fat cigars and we kept a drinking pace that was sure to lead to some kind of incident, and being that we were in Thailand meant that some kind of incident would certainly find us at some point. We left the fights after watching five matches, the first being a couple of 8 year-olds going at it till one of them fell down, the final featuring heavyweight professionals, and I had a $15 betting debt to Mike. We made our way to the nightlife area of the beach and ended up in a ‘Go-Go’ bar. This is an establishment where there are 15 or 20 girls, scantily clad, working poles on a revolving stage that circled each girl around the place for every patron’s view, in hopes of gaining enough interest from a paying customer wanting to have their own poles worked. The girls were in bikinis and very high heels and each girl wore a number on a button pinned to her bikini top. Almost everyone who worked in the bar had a number on them as well, including the hostesses and the bartenders. If an ‘employee’ really sparks something in you, you simply have to go to the front of the bar, tell them your number choice, and for about $100 the girl wearing the digits to your pleasure principle is free to join you for whatever recreational activities you may please, where ever you may please … in the allotted time of course.

We had no intention of getting involved in any Go-Go hanky-panky for a Thailand sex diary, but I sure was interested enough to sit, have a drink, tease the girls and watch the business unfold. And truth be told, teasing the girls is unbelievable fun. There is no shyness or meekness in this version of Asian girl. If you smile and make enough naughty faces at one of the revolving girls, at shift change – every 15 minutes a new crop goes onstage – she will come to your table and use her seduction and power of suggestion in the interest of moving your curiosity farther than just your imagination. I was having too much fun with it all and Mike and I had to get out before obligation supplanted curiosity.

We crossed the street to a nightclub that was packed, and as per usual, our suits made a pretty big splash and there were girls aplenty talking to us. I had been going by my alias, ‘Burger … King,’ said with a very French accent on the word Burger so as not to sound so obvious. Most of the girls called me “Buhr … Guurh,” which delighted me to no end every time one of them called my name.

Our eyes were blurring and our words were slurring by the time we found our comfort zone near the bar and we were having trouble keeping track of each other in the crowded club, even with our suits. Eventually, I lost track of Mike and gave up looking for him when I ended up dancing with a Thai girl that was trying to latch onto me. I still had not found Mike and ended up making-out with that Thai girl who was then hanging onto me. Mike had gone home, so I ended up on the back of a motorbike behind the Thai girl who I was then hanging onto.

She drove us through town, and I had no idea where I was or how long we had traveled when she parked her bike. We went to her apartment, a rundown, bland gray cement color building with a squat-type porcelain hole in the bathroom floor for a toilet; an Asian style toilet hole that requires you to take a pot and scoop water out of a large bucket next to it to chase down anything recently relieved.

I was in the living room, which tripled as a bedroom and kitchen, she was kissing me, and I was a very willing counterpart. Things heated up a little and my suit jacket and my shirt ended up coming off, leaving me in only my pants with my Scooby Doo boxers underneath. Suddenly she stopped kissing me and looked at me with big eyes and asked me how much I was going to pay…. Pay?!  Not my Thailand sex diary.  It does not work that way…

Well, I completely fucking flipped out. This girl had taken me to her house, a place that I had no clue where I was at, and now she wanted money from me. I was fuming. I had heard a rumor that local girls are not prostitutes, but Thai sex means that the girls usually want a few dollars because they are poor, and this had just happened to me. How naïve could I be? I was mad. I do not work like that. I do not pay girls to like me. I got up and was rustling around trying to collect my things to get out. She asked me what I was doing so I told her that I do not pay girls for their services and that I was leaving. I was cussing, swearing and pissed off at the whole situation. She sat me down on the bed and tried to calm me down. She told me not to worry about it and said that she liked me, and did not want my money. I am not an easy calmer, but eventually I came down somewhat. With my temperament in better control, and my anger fire cooled she fueled my other fire whereby one thing led to the next, which led to the next, and I ended up sleeping with her, keeping us occupied through as much of the night as I was capable of occupying us.

We woke up the following afternoon and she drove me on her bike back to my hotel. Since I was not going to be paying her for sex, I offered to fill her bike with gas and took her out for a nice lunch near my hotel. She told me that she really liked me a lot and asked for my e-mail address so that she could get into contact with me because she wanted to see me the following day. I paid for lunch, we walked outside, and I still had the remainder of the cash from my pocket in my hand when I noticed her eyes were drawn to it, so I asked her if she wanted some of it. (I had been thinking about this Thailand sex diary entry.)  She nodded and pulled about $30 worth of Thai money out of my hand while I hid my complete disappointment in her from her. How could I be so stupid and how could she be so greedy? She hugged me and I walked away. With my morals at stake, I was angry for most of that afternoon. When she e-mailed me the following day to hang out I sent her back a message that told her that I do not hang around with girls who I have to pay to like me.  Sex is not going to happen for me that way. That was the last I heard from her.

About two months later, I was passing back through Vietnam and on one particular rainy day I was in an internet café cleaning up my contacts list in my e-mail account when I came across a random address. So I e-mailed it to find out whose address I had, how I had that address, and how that person knew me. The reply I got back is as follows. Now a Thai girl wants me dead….

I will fight you by bottom of coke in your face I remember you good because you are sleep with me all night …crazy you go die .

Do you want more like this?
Try The Storage Room
https://www.bigbeaverdiaries.com/storage-room-hostel-sex/

“Howler monkeys deep in the jungle make quite a sound.  It is a deep roar of depth that is worthy of any jungle-movie mounting fear.  If our guide had not explained that the sound was from the howler monkeys, I would have assumed that the noise belonged to gigantic long-haired monster that ate souls of any who ventured into his territory without his permission.  That 'deep in the jungle' deep sound is frightening.”
— The Bolivian Jungle
[View All]