Stone Town to Nungwi – Worlds Last Open Slave Market.
Dec 11
Free guesthouse breakfast, check-out, and head to the Anglican Christ Chruch Cathedral which is the former site of the worlds last open slave market.  Legend has it that that alter of the church now sits above a tree where slaves were whipped to show their strength and hardness.  There are holding cells for the males and for the females under the church.  Slaves from central and east African were bought and sold here.  However, on 6 June 1873, Africa was liberated from slavery and a dark period in history ended the worlds last open slave market ended.

I left Christianity and the site of the worlds last open slave market behind in an uncomfortable state of mind.  I caught a dola dola for 2000 Tanzanian shillings ($1) for a two hour ride to the north of the island.  It was an African pick-up truck and there was a roof over the box and benches around the insides where people crammed in.  The dola dola got incredible full to the point where there was no room for anyone else to fit, and yet, they managed to squeeze three more people in.  My legs and ass was numb from not being able to move for so long with my heavy backpack on me.  One of the guys who caught a ride was wearing a calculator watch, and not only was it a calculator watch, but it was bright orange.  I wish I owned it!  Most men in Tanzania have shaved heads.  At one point when I counted, there were 15 other men in the dola dola, and their accumulated hair together did not amount to what I just have alone.  On the drive, we passed a man who was wearing one flip-flop and one running shoe.

I made friends with a local guy named Fey who was squeezed next to me on the dola dola.  He is a cook in Nungwi, the beach at the north of the island where I was staying.  He took me to where he works where they rent rooms to tourists.  The guy wanted $30 or $25 for a room.  I was charming and when I said that was too expensive, he asked my budget that I said was $15.  He took me around the corner to his friend who wanted $20 to $25 but took $15 from me on the condition that I kept it a secret.  Deal.

On the beach, I befriended a local named James who took me for a walk through the village and showed me around.  I asked him about the fishing boats and if he can sort me out to get on one.  He said he has friends and that he would ask around.  I think that would be a pretty rich experience….  James told me that he pays $30/month rent to live here on the island, and he shares that with a friend.  I pay that in two nights, and I got a great deal…

James told me that if you go to a Muslim school here on the island, education is free.  However, if you want to go to public school, you have to pay fees.  That is pretty clever of the Islamic state…

I went out for dinner at the restaurant where Fey works and then at night he took me to a local bar where I played pool with the locals all night.  It was a lot of fun and I made friends with about 10 guys who live here.  I am staying away from the tourists so far, and the locals have been wonderful and so happy to meet me.

* “Even me, when I see woman, I like to look her first in the breasts.” – Fey, a local Tanzanian man. 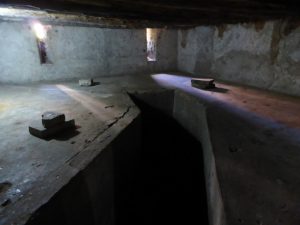 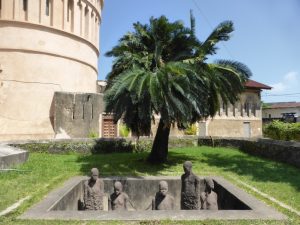 Darkness on a bright day. 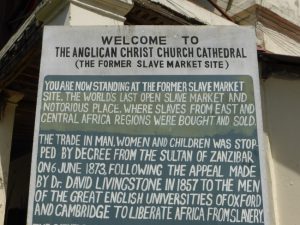 Africa was liberated, when in 6 June 1873, a terrible period in time ended… 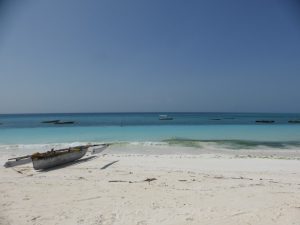 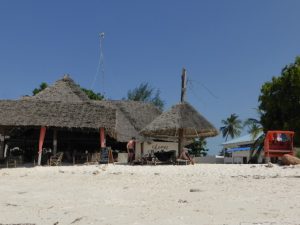 Not such a bad place to spend some time. 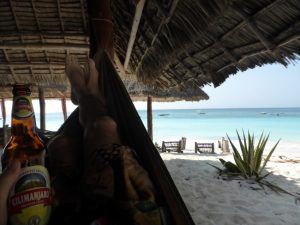 Hand made boats. Even the drills are run with ropes. 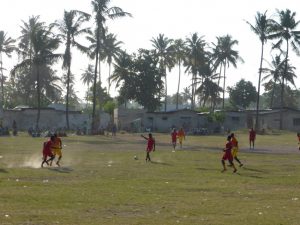 A league game. I like the fans sitting in the grass. 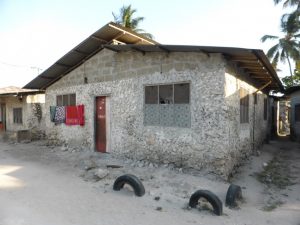 Tires for sitting in the villages. I feel like this is a lost art. 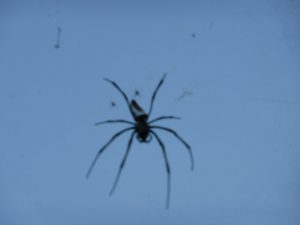 Sometimes you have to make due with what you have!

“I could have paid $80B (about $11.15 U.S.) for my bus, but I found a cheaper one for $70B (about $10 U.S.) instead for the 18+ hour ride.  I found out that the cheaper bus in Bolivia means that you will have to listen to some a-hole with a bible in his hands standing in the aisle go on and on about fairy-tales in Christianity.  I thanked god for the first time in years, that I am slow to learn Spanish.  A couple of hours later as we were driving through a village, the same a-hole had a blow-horn out the window and he was preaching to the people of the town as we were briefly stopped.  A little while later I toddler child on the bus tried to befriend the a-hole and he would have nothing to do with her at all.  I wanted to pull on his beard and smash his blow-horn over his head.  I think there is no lower specimen of life on earth than the ‘good’ Christian hypocrite.  Be sweet the child a-hole.”
— Self Realization
[View All]