Big Beaver, Saskatchewan, Canada.
I woke up at 06:45 but there was no way I could get up. Exhaustion had succeeded any chance of alertness. I fell back to sleep and woke up again at 09:00. Not Larry and I had a little slap and tickle to kick off the morning. At 11:00 we were packed up and ready to roar. I called dad who was at my brother’s house doing some farm work. He came back to the house to say goodbye to Not Larry and I. He asked her when she was coming back so that they could go dancing again. I like how she has become his buddy. He was still giggling and talking about how everyone thought she was his girlfriend on the weekend at Gateway Festival in Bengough. That is so awesome.

Once we were motorhome-loaded, Dad stood watch while I drove the bumper of Beatrice the motorhome into a power-pole to straighten it out a little, then Julie and I hugged he and Pat before hitting the road. It was 11:30 when we left the ranch in Big Beaver with 130,170 kms on Beatrice, a 1979 Bendix 29’ GMC motorhome with a 454 cubic-inch engine between our sets of legs, driving us east through the Big Muddy. A couple of hours down the road we stopped in a small town and bought $70 worth of beef-jerky to keep us moving.

Not Larry even whipped up a meal in the oven as I pressed down, eastbound.

We played a lot of loud music and had a blast on the drive. Not Larry was dancing around the motorhome to the tunes and even gave me a massage as I drove.* Heck yeah!

* The fore-mentioned massage even an euphemism. It was a real massage. Life feels good on the road.

When we got to Brandon, MB, Not Larry and I used the Beatrice’s PA system on her CB radio to trash-talked the city the whole way through, commenting on places we have spent time when we had to live here, like the Key Rock strip-club where my girlfriend was more attractive than any strippers we ever watched, and the waitresses seemed to be equal-opportunity waitresses. We verbally shredded the town over a loudspeaker on the pass through. Even though we needed food, we decided to just fuel up and skidaddle out of town as we could not wait to leave. We have spent enough time in Blandon, Manitoba… 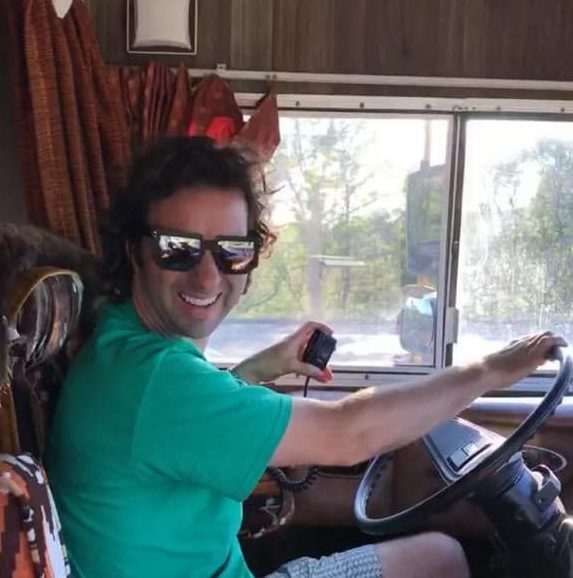 Beatrice ran so well as we rolled into Winnipeg. Not Larry found the closest Walmart where we parked as level as we could, had a beer, and crawled into bed at 01:00. We were both tired, but mustered up the energy necessary to bounce the mattress in an effort to spread positive energy into Beatrice so that she keeps on driving like a champion!

We got up and had cold showers in Beatrice in the Walmart parking lot because neither of us seemed to want to get dressed to go outside and light the pilot on the hot-water heater. Well, neither of us exchanged words about the idea, so I guessed that Not Larry did not want to ask me to go and do it and she did not feel comfortable doing it herself. So, we squealed and gasped a little as we showered in the cool. Not Larry banged out an omelette in that time. Having a motorhome is pretty luxurious!

Beatrice took Not Larry and I into the center of Winnipeg. Winnipeg is rough, as in rough roads. I had heard the humans are rough as well in rumors, but I think that is just people who come from lesser cities who are trying to better their own with Winnipeg slander.

In all of our experiences in Winterpeg, we have encountered a rather pleasant group of locals.

I did a commentary of Winnipeg through the PA system and speaker of Beatrice for everyone on the streets as if we are running a tour company out of our motorhome. When we got to the city center, Not Larry said she was going to do something. She would not tell me what it was but she left me in the motorhome to tie up some things and when she got back she had sold three books to some readers. Awesome. What a teammate! She can run off anytime she likes if she is going to move Traveling Through North Korea books! Then we dropped into the biggest Chapters bookstore in town to leave a book with the consignment manager. Maybe when we come back through we can do a book signing and generate some more book interest…

Not Larry says that Winnipeg has culture. She is probably right as there is a good music scene here. Try and find that in a city in the west…

The second ‘A’ in Canada has a new accent.

When we left Winnipeg to continue traveling the Canadian Prairies and just when we got going east, we found a giant sign that said 96° 48’ 35” Centre of/du Canada. The longitudinal center of Canada. That was a nice treat to come across. We took fun photos that included Beatrice in the background to make her an obvious part of the gang. Someone named Beatrice has likely never been a gang-member in the history of time. Beatrice is generally a very sweet woman who crochets blankets and probably makes amazing cinnamon buns. Our Beatrice is a sexy hot-rod home with a badass cow-skull adorning illuminated red-light eyes to frighten children and the weak of heart. Our Beatrice can easily slide in as a full-time gang-member. This is probably the first ever featuring-Beatrice gang ever!

I should probably think of a name for our Traveling the Canadian Prairies gang. Maybe the Not Larry Beaver Bandits…

We dropped into Steinbeck South Airport to see if we could track down Aaron Doherty who has been giving Not Larry and I our ground school training lessons online. The lessons are all pre-recorded videos so Aaron does not know us, but it sure feels like we know him. I wanted to do an interview and talk to him like he is the rockstar of Canadian aviation. There were a list of questions in my head for him such as:
‘What is the craziest moment you have had in a plane?’
‘Now that you are a superstar in aviation training, are you happy in your mansion on the hill?’
‘When is the last time you had to stand in line at a restaurant?’
‘Let’s discuss the aviation groupies Aaron? Do you ever get tired of them?’

I am sure he is just a regular guy, but it sure would have been fun to treat him like a massive star. But, alas, Aaron was teaching a class when we arrived. I had been so freaking excited to meet him and was sad that we could not. Hopefully we can catch him on our return.

On the drive east, we often held up in road construction. The road construction was actually quite a pleasure to be a part of because Not Larry and I talked to most of the people on Beatrice’s PA speaker. I offered a lot of encouragement to the workers like, “You are doing an amazing job of leaning on that post!” and “Thanks for keeping us safe!” A PA system can really make for a good time.

Traveling the Canadian Prairies wrapped up as Not Larry and I arrived in Ontario, a place which she refers to in jest as Onterrible. The sign welcoming us into the province said, ‘Ontario: Open For Business.’ Open For Business?That is a pretty lame slogan. If we are going to start doing lame slogans, maybe the last two could be, ‘Saskatchewan: If You Are Not From There, You Probably Can Not Spell it,’ and, ‘Manitoba: On The Way To Wherever You Are Actually Going.’ Both of those are nearly as bad…

The Video of Traveling the Canadian Prairies: Enjoy the fun!

Want to carry on to Ontario with us? Click me!

“Many of the locals in Mbulu have never met a foreigner before. They are fascinated by my long hair. When I took off my motorcycle helmet for this photo, a grandmother nearly laughed herself into hysterics at seeing my long hair that was everywhere. Had she not been laying on the grass, I think she would have fallen down laughing...”
— Life in Tanzania
[View All]