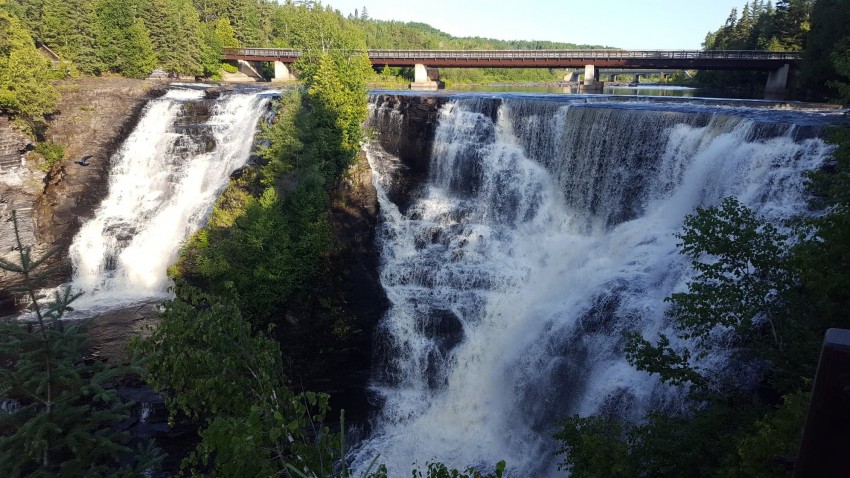 Not a bad way to start a day!

Heading east traveling Northern Ontario, we cruised on into Dryden, Ontario, a city I have really wanted to pass through since I first looked at a Canadian map as a boy. When you look at a map of Canada and see the cities in the provinces, far-western Ontario shows only Dryden. Only Dryden exists! That city name made the place feel somewhat familiar from seeing it so many times. It is pretty desolate and beautifully empty to get to Dryden and it is about the same to leave there. Dryden’s motto could be, “We are all you’ve got.” Dryden, Ontario, is something like the chubby girl in the bar who could not get any attention at 23:30, but suddenly finds herself to be very popular at 02:30.

The highway to the east of Dryden, heading towards Thunder Bay, becomes a commercial path once it gets dark. There was almost no other traffic than transport trucks, but those were there APLENTY. Three trucks were right behind me and 20 out of 23 vehicles we met in a row were transport trucks. One truck seemed to want to get in a head-on collision with us as it raced our way in our lane to pass another and I had to brake to save us from certain death. About 15 minutes after we survived that, a semi decided to pass us when there was another truck coming in his lane. Once again I had to brakes to let him past us to keep those two from ending up in a head-on. After the second incident, I got on the CB radio and called the trucker quite a few names that his mother might not have liked me calling him. I just did not really care too much for nearly dying because of another driver’s stupidity. Not Larry suggested that we find a place to sleep for the night at the next convenient moment. Her opinion was of high value.

The #11 highway between Dryden and Thunder Bay is a dangerous place to be at night.

Beatrice cruised us on to a small rest area called Mokomon, where we parked for the evening close to a sign that said ‘No Camping.’ No problem. There was another camper van parked there and a couple of bicyclists with tents had found a flat spot. I was thinking about the camping bicyclists: there is no way any authority could arrive in the dark to tell a person on a bicycle in an isolated area that they were not allowed to stay for the evening, “Get up and ride, son.” That ‘No Camping’ sign could never apply to them.

Not Larry and I were tired, probably from drive-nerves and headed directly to bed in Beatrice. The bed is now squeaky. Not Larry says that we make unsqueaky beds start to squeak. We must be doing something wrong in the way we sleep…

Not Larry woke up a little before me and started off on the drive. She had set an alarm to get us moving and traveling Northern Ontario. There was not even skin contact; she was just suddenly in the driver’s seat and off we were. But, that got us to Kakabeka Falls early in the morning so that we can make some travel headway. And the Kakabeka Falls are marvellous.

For a cultural lesson I can tell you that Kakabeka is Ojibwa for ‘Thundering Water.’ You are welcome! And Kakabeka is all of the word ‘Thundering.’ It is noisy, powerful, and beautiful.

I have seen a lot of waterfalls around the planet so I have become something of a waterfall-hardened snob…!

But, Kakabeka Falls…whoeee… What a luscious place to drink up with your eyes.

As Not Larry and I headed to Thunder Bay I was thinking about how people in north-western Ontario must feel pretty isolated. There is massive distance between places, there is a very small populus of people, and those who call north-western Ontario ‘home’ get lumped in with the population belt of this country near the expanse of Toronto and surrounding. They are all Ontarians. Then as things have a way of going, Ontario gets blamed for bad politics as their majority of people largely infulence the vote of this country, and then the rest of the country shouts, “Ontario!” with disdain. Meanwhile, the little guy in north-western Ontario is the innocent fella the policeman nabs, and he has to defend himself saying, “It is not me pal. I didn’t do it.” So, the north-west ends up with a bad rap for name association… They must get tired of that. 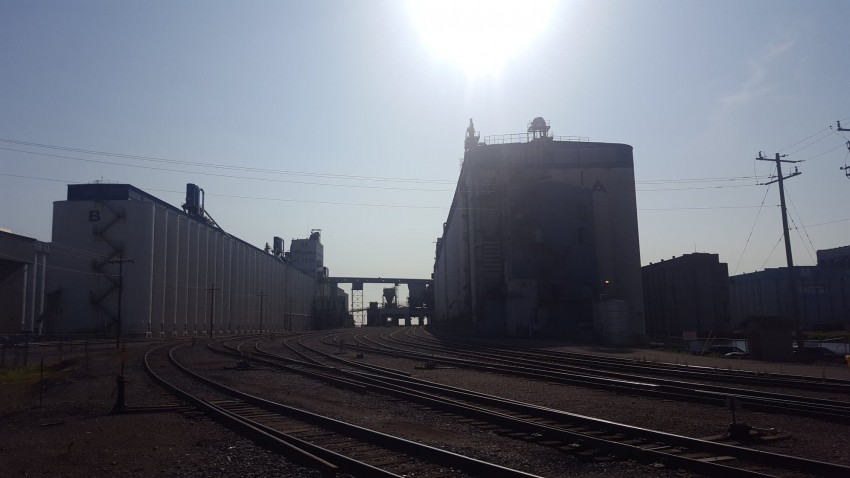 Thunder Bay is a nice city. It is where so much of the prairie crops arrive by rail to be put on a barge heading east. There are giant grain terminals on the shores with train-tracks running through them, and the terminals are busy loading barges parked next to them. At least seven giant terminals line the Thunder Bay shores of Lake Superior, but it seems that only four of them are still in working order. That got me wondering what one would do with a defunct skyscraper of cement? It is too big to buy off the city for the purpose of throwing parties, and who wants to deal with cleaning up all of that concrete and grain dust… So, they sit like abandoned castles.

It may not be quite as rugged, but north-western Ontario looks a little like British Columbia due to the trees, lakes, rivers and green everywhere. But, north-western Ontario also seems like it is still connected to the year 1999. Robin’s Donuts exists with frequence, a business yet to be completely replaced by Tim Hortons. And the Robin’s Dounuts we visited was connected to a laundry mat that rented DVD’s and had someone inside was talking on a payphone, probably asking his wife what movie he should rent and bring home. Allegedly, they surf the ‘internet’ there with something called Netscape…

Travel Tip
Drop into Gilbert Hardware in Beardmore, Ontario. Anything you need is likely to be part of the 31,000 things Mr. Phillip Gilbert has in the store, many of them relics! 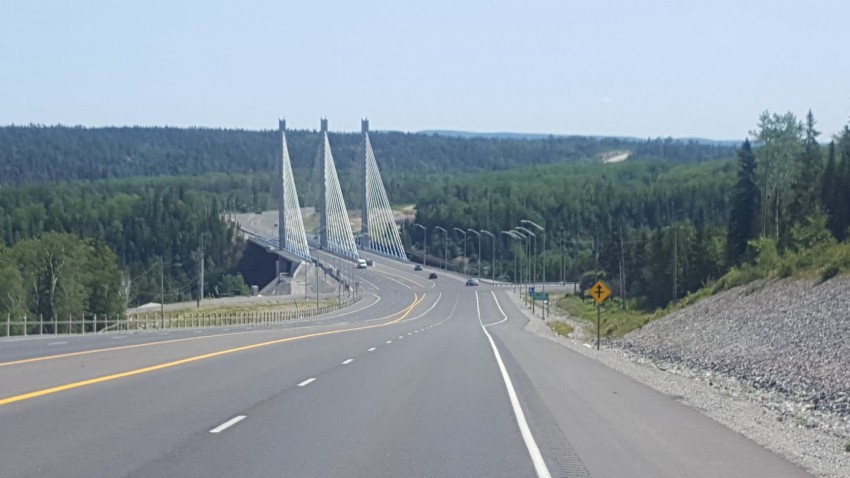 It is very pretty here!

As we were cruising alongside Lake Superior, Not Larry and I were discussing about what it must have been like to have been a French fur trader who arrived on the northern part of this continent after crossing the ocean from Europe to find the Great Lakes. It must have been incredible to have discover bodies of fresh and drinkable water that continued for months of travel by foot.

There is a lot of French north of Thunder Bay while traveling northen Ontario. Not Larry and I had to go on a gas-cap scavenger hunt after I decided to leave ours on top of the pump at our last filling. We ended up at a wrecker near Geraldton that was more of a general junkyard. The man who ran the place was a very kind 77 year old Frenchman who initially tried to speak to me in French until I explained that I am a unilingual moron. Luckily for me, he could English just fine. The man working for him spoke French. Another older man there to find parts also primarily spoke French. I really had no idea that there was so much French here in Ontario. Even the road signs bare words in French first before they translate it into English below. I knew there was some French in Ontario, but I thought it was only seven or maybe eleven people who live just inside the Ontario border from Quebec near Ottawa. To my surprise, it would turn out that there are many many French speakers in Ontario. I am glad to meet them. As someone who grew up in a purely white, English speaking, cowboy society with barely a Chinese restaurant in the vicinty, I am happy to learn that there is more culture that meets the ears in places I had not expected it! French Ontario! 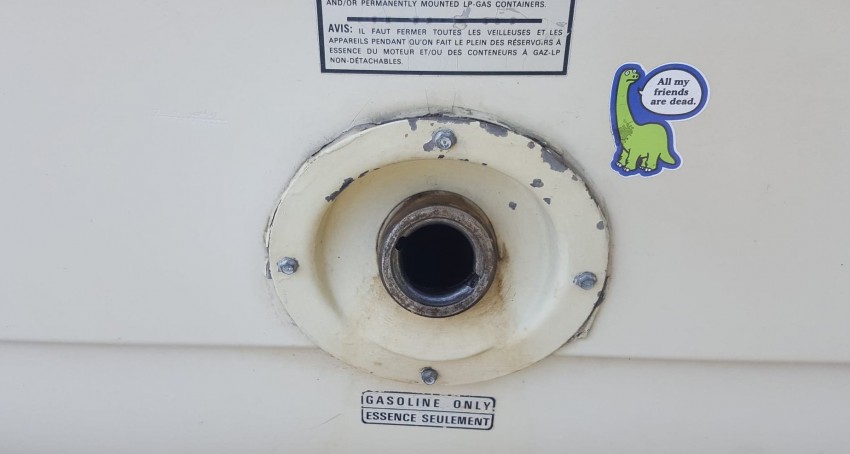 I screwed up by not screwing it up.

Our new French friends were happy to help us find a new gas-cap for Beatrice, but it is not an easy feat to find a new gas cap that is at least 40 years old. I mentally recognized the one for Beatrice from my childhood memories as one that would fit a 1967-1972 GMC, and there were two of those in the yard, but neither remained petrolly capped. We kept on the search up and I had a blast among the old cars in the junk yard. Not Larry and I split up for the gas-cap hunt and she won the race. I felt shame but was very proud of her for her fancy chrome find. She carries a keen eye for things, especially in her last hunt for a man!

One of our new friends asked Not Larry where we are headed. She said, “Hopefully all the way to Newfoundland.” He asked, “Are you going to Quebec on the way there?” Not Larry did not feel like giving a geography lesson, and I appreciated the innocence of that question so much. The folks in northern Ontario are pretty rural.

Somewhere along the road past Geraldton, I found a gas station that was an Esso. We have three cards that save us 5¢ a litre for 100 litres, which is pretty handy when the fuel is a mere $1.38/litre. That 5¢ savings knocks the price down to $1.33/litre…cheap enough to give away! I ended up putting $186.86 worth of fuel into Beatrice. Peanuts!

Finally, we stopped in a town called Kapuskasing, which you may have to sound out slowly when you are reading it to figure out how to say it. Here, I will write it again so that you do not have to go back…Kapuskasing. That is a fun word. What was not fun though was that Beatrice provided me with the opportunity to change her battery in the Walmart parking lot, at dusk, in a town that must have been starving the mosquitoes for a week. I am not sure if there was a call that went out through the whole town to let them know that I had bare legs hanging out of shorts, but it seemed as though all of the Kapuskasing mosquito inhabitants found out I was down there and that my hands were too busy to defend them. I became a legged buffet of delightful dessert for the little heathens.

It turned out to be the fastest I have ever changed a battery in my entire life. 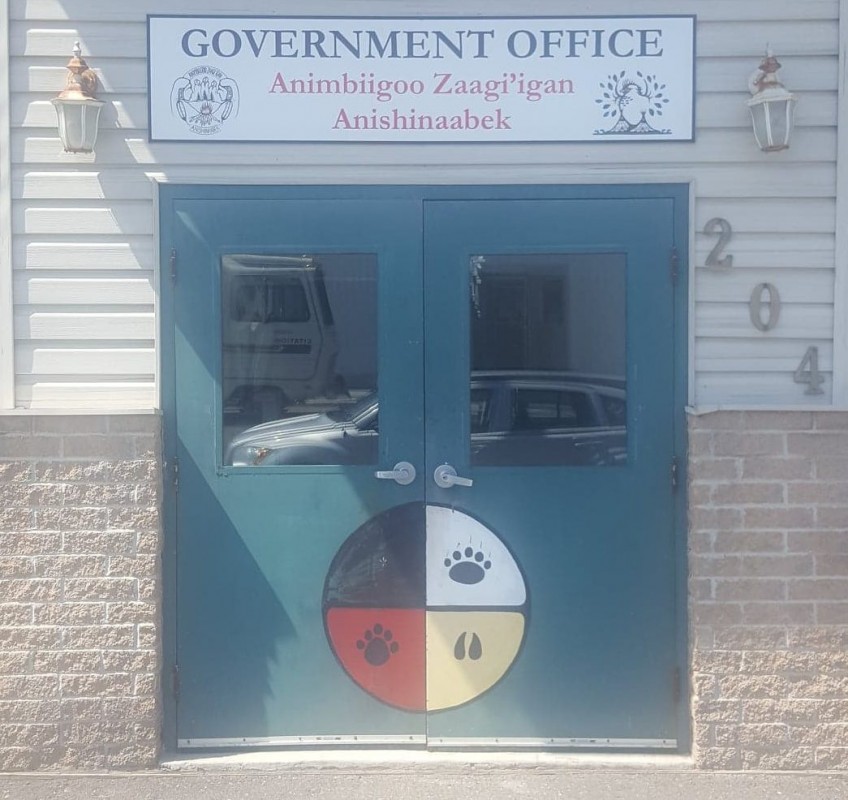 There may be a lot of French in Ontario, but they also use indigenous languages. This is awesome! Try and say that!

Not Larry and I were up until 01:00 last night, drinking beer and hanging out in the motorhome. Then she managed to pull herself out of bed at 06:30 to get us moving while I slept a little extra. But, I was paranoid that I have not checked Beatrice’s oil since Weyburn, Saskatchewan, which was two provinces ago, so I got up as well. I was in a pair of underwear when I found out that Beatrice had grown weary of two of her litres of oil and was only keeping a drop on the end of the dipstick for my inspection-panic. But, the joke was on her as we had two spare litres tucked away under the seat to top her up anyway. I will have to keep my eye on the on the old trickster a little better.

The video of Traveling Northern Ontario: