The Situation of my Mother with Alzheimer and Dementia

The Situation of My Mother with Alzheimer and Dementia.

Doug, my mom’s husband/my step-father, collected me from the mall.  He told me that he barely recognized me when he first saw me because of my short hair.  Doug then drove me to see my mother at the care-home where she stays.  The home was having a hot dog and hamburger sale so entire families were there to be with their loves ones who have been institutionalised…

I was not sure how it would work out when I arrived with short hair to see my mom.  Perhaps she would immediately recognize me as that is how she knew me as a child growing up, or maybe it would confuse her that I do not have really long hair for the first time since her mind really started to disappear.  I was very interested in her reaction. 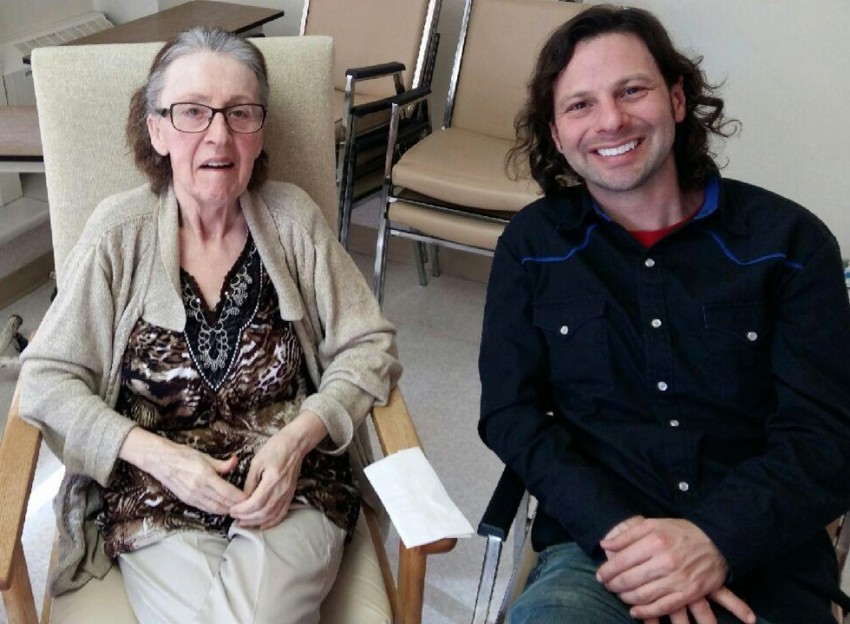 Mom and I, from a little before I chopped off my locks.

My mom spends a lot of time walking around inside of the community home where she is essentially a lock-in prisoner.  She can not sit still for long.  Unlike some of the others in the home, she is not trying to escape.  There is a collection of photos of those who are, on a paper inside of the elevator doors as well as outside the elevator doors, similar to what you would expect to see in the newspaper displaying escaped convicts.  The ‘Warning’ when you step out of the elevator is to pay attention for those faces, because, as the paper states they are ‘Prone in Attempt to Elope.’

‘Prone to Elope’ is exactly what happened when I entered the building later that day. The elevator door opened and there was a woman with a red top who had been waiting for the moment when the elevator would open and she was trying to get in as I was trying to get out.  On the floor of the Alzheimer and Dementia patient ward, a special technique of calling the elevator is required: this technique involves lifting a metal flap that covers a narrow slit, behind which are the ‘Up/Down’ buttons that require a pen-tip to be able to push.  The lady in the red sweater had it figured out through her Alzheimer and dementia that she could not get the button pushed from her side, but she sure could escape when the elevator arrived…

I came off the elevator and the lady in the red top was determinedly getting on.  Luckily I clued into the situation and I caught her at the door.  She was moving forward, but I calmly blocked her path and smiled while saying nice things about her shirt as she fidgeted to get around me in the moments until the doors eventually closed behind me.  She was disappointed but I assumed she would forget about it right away.  It is incredible that her natural instinct is to escape.  She does not really know what she is doing, or where she is going, but she wants to get out.  It is frightening to think about how terrifying it would be for both the care-home and for her if she did manage to elope…

Happily, my mom’s face is not part of the photos of the escape-attempt-convicts door-list.

Mom may be losing her memories and ability to speak, but no matter how overcoming her Alzheimer or dementia is, she certainly knows Doug!  His time and effort for her is clearly evident to anyone who enters the care-home with him, or to anyone who is a regular there.  Based on the response to his arrival alone, there is no denying Doug’s dedication.

Doug married my mother 18 years ago, and six years ago her mind started to slip.

I am my mother’s son.  The lady raised me.  My DNA is partly hers.

As Doug and I first entered the building, mom was walking towards us, just by chance.  Her eyes were down and she had not seen us.  It is hard to imagine what she might have been thinking about in the moments as she was walking before Doug said, “Hey gorgeous,” to her!  Though my mom has a hard time eating by herself, can no longer dress herself, can no longer put together sentences of more than three words because she forgets what she was talking about, and does not know who her children are anymore, she knows the sound of Doug’s voice.  And when she hears that voice, she searches the strange faces, including mine, for the face that her mind still somehow knows belongs to that voice.  She lights up, her face flushes, and her walking pace turns into a trot as she rushes to put her arms around him like he is a returning war-hero.

My mother’s response to Doug is a beautiful thing, and it is clear that it is very rewarding for him to be able to see this woman who loves him so much.  Even though she can not express as much verbally anymore, she sure is capable of showing her emotion towards him.  Something inside of her knows.  And that spark of a moment, and that face that glows at hearing his voice…that is of pure love.

Doug asked my mom if she knew me.  She flashed me a quick smile, said something I could not clearly distinguish and moved back to Doug.  I am not sure if she realized who I was or if she was just being polite in the way her parents trained her about 70 years ago.  Her reaction to me does not hurt me.  In fact, I am glad it is this way.  I am home so infrequently that if it was the opposite way and she remembered me only because I am her child and could not remember Doug who lives his life for visiting and spending his time with her…that would be despairing.

So, in a way I am glad that I am just a third wheel visiting my ill mother, because she loves the man who spends the time with her.  And even though she may not remember his visits, something inside of her knows and understands.  Her subconscious emotion reacts.  She radiates happiness in seeing his face, even if she does not understand the situation.  The happiness in her knows.  As this happens, I can hear the nurses nearby coo at the moment.  They are used to this reaction by my Alzheimer stricken mother.  I suspect that those nurses are consciously aware of this moment of the day and wait to watch for this magical display to happen.

Doug would tell me later in the evening that he knows the day is coming as the sickness continues to set when my mother will not recognize him.  That day is going to break Doug’s heart. 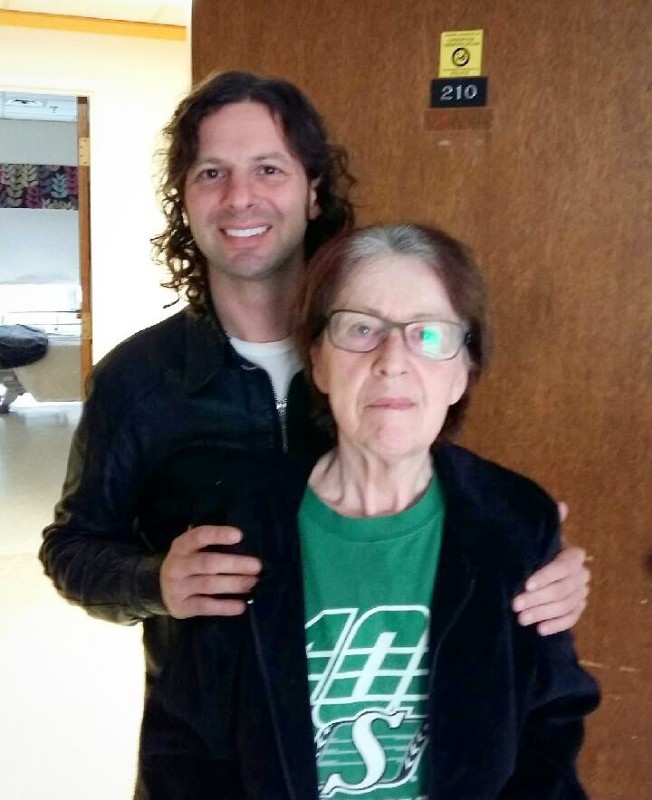 Mom and I from last fall.

There are some fascinating inner workings of this facility where mom stays.  Doug told me that there is a Sunset Phenomenon which takes place, where within an hour of sunset and an hour after, the patients are quite vocal and wild.  Doug has had to act as a bouncer in the home as there are fights between the patients.  It is incredible to think about…that such aggression comes from people in such a state of mind.  Perhaps the frustration is being released.

In the home is a man named David.  David has dementia.  David also has a new girlfriend in the home that he holds hands with and kisses.  She also has dementia.  It is very sweet, but David’s children/grandchildren have stopped coming because they are struggling with what their dad/grandfather is doing in the home.  It is hard for them to come in and see him kissing a lady that is not their mother/grandmother.  And, David’s wife…she has been there once in the New Year.  She is hurt….  I am not sure how to feel about it myself because it is not my situation, though it sure makes me think.  On one hand, David has been institutionalized.  His mind is going and he has dementia.  While the rest of his family has put him in a home because he needs help, he seems to be genuinely happy.  His wife obviously can not take care of him anymore.  And so, if he is content, well then, what does a person make of it?  These are his twilight years.  His family is sad, but he also does not know what he is doing, and he seems to be pleased right now in his situation while coping with Alzheimer and dementia.  It is a very interesting state of affairs…  Everyone is impacted differently by events on others’ lives.  It is hard to know how I would handle this situation myself.  Perhaps those who are so impacted can use that as their own crutch to turn their backs on circumstances so dire and difficult to face.

It is important to be around with Doug and my mom when I am home.  These are not easy times, and while it is heavy, it is my due diligence as a grown-adult child to be there for moments when I can.  Most of my time spent with my mother and Doug are in motion as my mom likes to walk and stay moving.  We walk to the end of the corridor, mostly in silence, come back, and then make a trek down another wing of the building before returning again.  Oftentimes, we repeat the same journey immediately after.  Doug always holds my mom’s hand, and I hold her other hand, just to have some kind of connection to her.  She usually tells me how beautiful I am at least once while I am there.  I assume that these are those fractions of moments when she realizes who I am, her son, there to spent time with her. 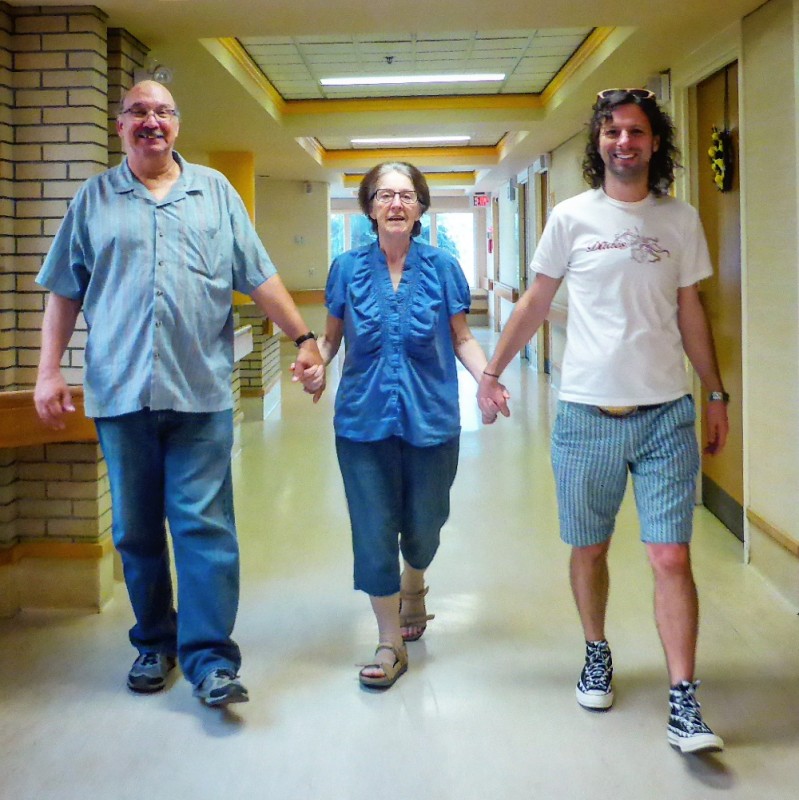 On a walk last fall; Amazing Doug, my beautiful mother, and me.

My reason for being there is to see my mother and be present with her when I can, but more than that, my reason to be there is to spend time with Doug as he spends time being a husband to his wife.  These times are tough for me as a son.  I am certain though, that they are tougher on my mom’s husband.

It is truly incredible how compassionate Doug is to both my mother and to the whole care-home itself.  He is something of the leader of a support group within the home, as he and another lady are there to speak to the family members of new patients.  They allow people to settle in and a few days later they approach the family members to talk and to provide information through the future that is sure to be harrowing for all.

Not one part of any of this is easy for anyone, but it makes me very proud of Doug, and proud to be connected to such a noble human.

“I love it how in at least half of the bars and venues I visit in Edinburgh have no mobile phone coverage inside. So, people are not on their phones in many bars and clubs. It is old fashioned and people talk to each other. It is sort of like smoking now, and people go outside of the venue to get mobile coverage to send a message or receive one they are waiting for, and then they come back into the venue to socialize. My friend used the term 'Social Admin' yesterday - having to deal with 10 messages from people while you are out with your friends…”
— Edinburgh Fringe Festival
[View All]