March 28
I got up at 05:45 for the sunrise.  The people at the Sani Mountain Lodge had been raving about it.  I prefer to curse the sun to howl at the moon, but sometimes a man needs to tackle a sunrise.  Nature here had convinced me so. 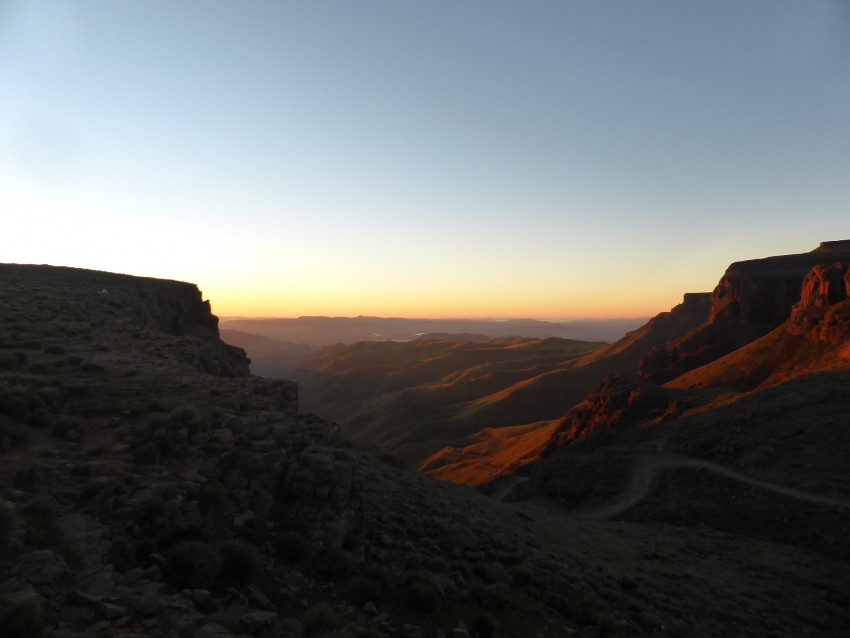 I like the outline of the land below the sunrise.

“Are you from Wales?” a local asked me today.  Wales?  That is a random one…
It was cold.  Like a-sweater-is-not-enough cold.  But, while it is cold for me, the Lesotho’s really take it hard.  They were wrapped in blankets, coats, hats and gloves as if it was the middle of winter in Greenland.  Sani Pass is a windy and cold place, but even when you get down the lower altitudes and it is t-shirt weather, the locals are still wrapped up.  Many people here have told me that they would like to live in England or Canada, but I am not sure if they could handle it. 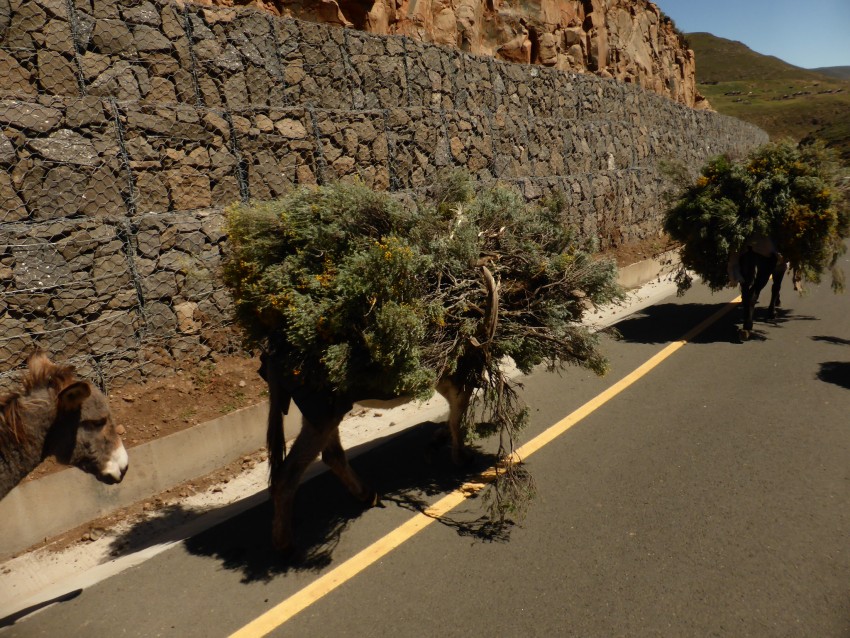 I caught a convi-van down the mountain to Mokhotlong for 110 rand ($7.10) which was a lot, but I was tired of standing in the wind waiting to hitch a ride.  I know I have mentioned this before, but it bothers me so much when local drivers swerve at the pedestrians walking down the road.  They do this so often.  Someone is walking down the side of the road and instead of moving further away from them, drivers move closer to them so that they have to jump out of the way.

It is some kind of power thing.  I makes me want to punch my driver in the face.  If I was walking down the side of the road and not thinking about it, I would be killed as I would not automatically register that someone might attempt to hit me on purpose to show me how big he is in a giant piece of machinery. 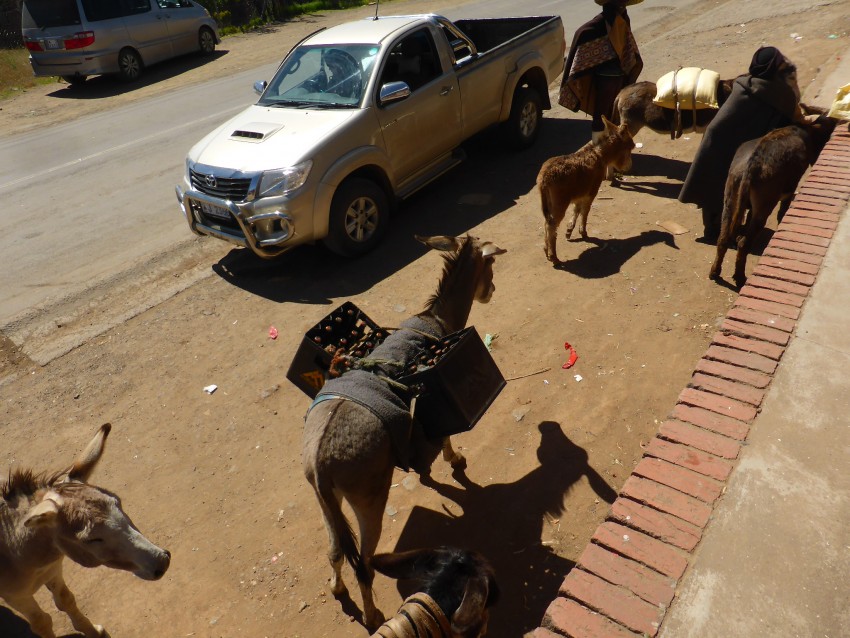 When I got to Mokhotlong, I was sitting outside of a supermarket having breakfast when a man approached me like he knew me.  It was Michael, the man who owned the semi-truck that I had hitched a ride with two days ago.  Awesome!  He took me with him to see his businesses.

Michael runs a grocery store and he also sells bulk feeds for both humans and animals.  His biggest seller is white maize and yellow maize that people eat.  A 80 kg gunny sack of white maize is 505 rand ($32.70) and the yellow goes for 440 rand ($28.50).  He told me that a family can easily go through a 80 kg sack in a month.  That is 176 lbs of maize powder in a month!  The Lesotho staple diet. 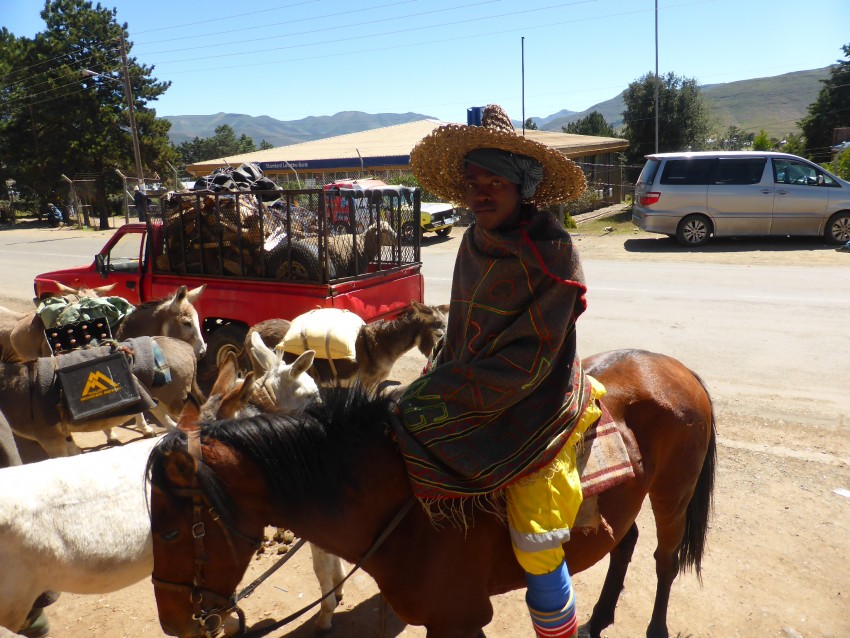 As luck would have it, Daniel, Michael’s driver was heading north on a run to South Africa to make a pick-up with the semi and could drop me off in Oxbow where I was headed in Lesotho.  The truck was broken-down, but a mechanic was on the case and had us on the road in an hour.  Daniel was to make deliveries of maize sacks along the way, so I would be his delivery right-hand-man.  And that is how it went.  I am just going with the flow of life right now.

We were along a mountain road and we would pull up alongside of a people who were waiting for us to deliver their order, seemingly in the middle of nowhere.  Daniel and I would get out and give them a couple of gunny sacks of maize and then we would carry on.  We made three roadside stops and then we made a major delivery to a store in a village who took the rest of our load off of the truck. 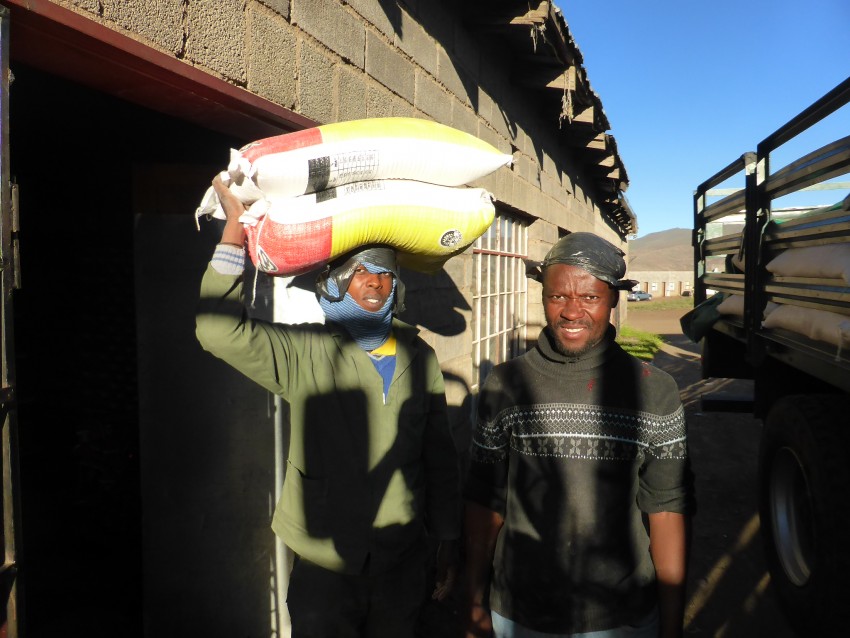 I am a big fan of the plastic bags on the head to keep the flour out of the hair. I wanted to make the joke, “Do you know if they make those bags for men too?” but I knew they wouldn’t get it.

I bought 10 small packs of cookies for the semi.  As we would pass children on the side of the road, I would toss a pack of cookies at them.  You can create pretty big smiles for doing that.

Lesotho is a time machine.  If you have ever wondered what the country might have looked like 75 years ago, come here today.  It is the same.  The only difference is that there are paved roads, mobile phones, and urban areas have electricity.  For the most part, the main means of transportation is a horse or a donkey.  There are herdsmen dotting the landscape everywhere.  Just when you think you are really far from anything, there will be a solo man standing on top of a hill somewhere.  Lesotho is rustic, natural, innocent, unspoiled, gorgeous, safe, and raw. 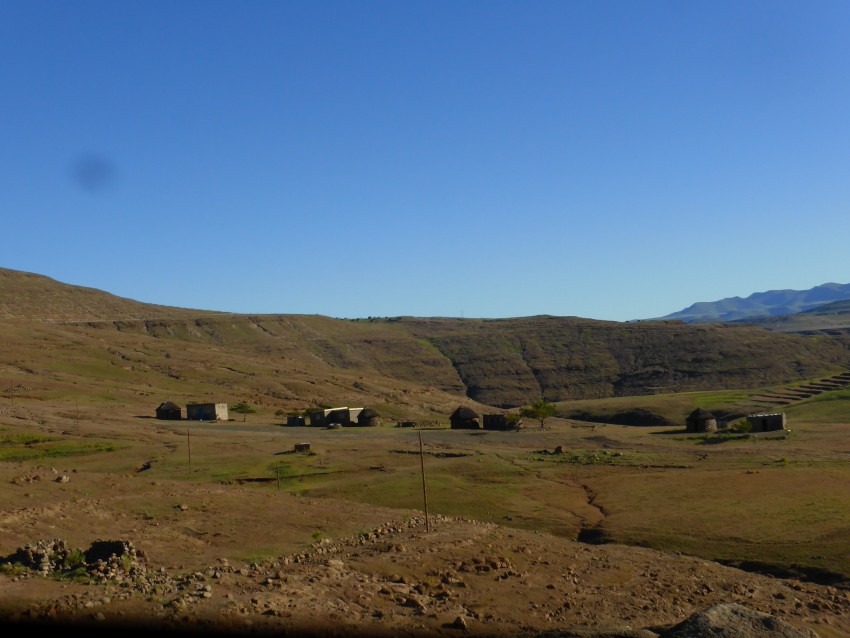 When we got to Oxbow, Daniel pulled up to the New Oxbow Lodge and I found a dorm room for 150 rand ($9.70) in an empty room with a double bed.  Sweet.  There was a bar next door so I went to play pool with the locals and made friends and laughs doing so.  When I first went to play, I asked for chalk for the pool cue.  A man searched around and he found me a crumb of blue chalk for me to use.  I was laughing so hard at what he had handed me.  Later on, during that game, a brand new square of chalk showed up “for the white guy.”  I was the only one who used it though.  The locals never use chalk here, likely because they never have it. 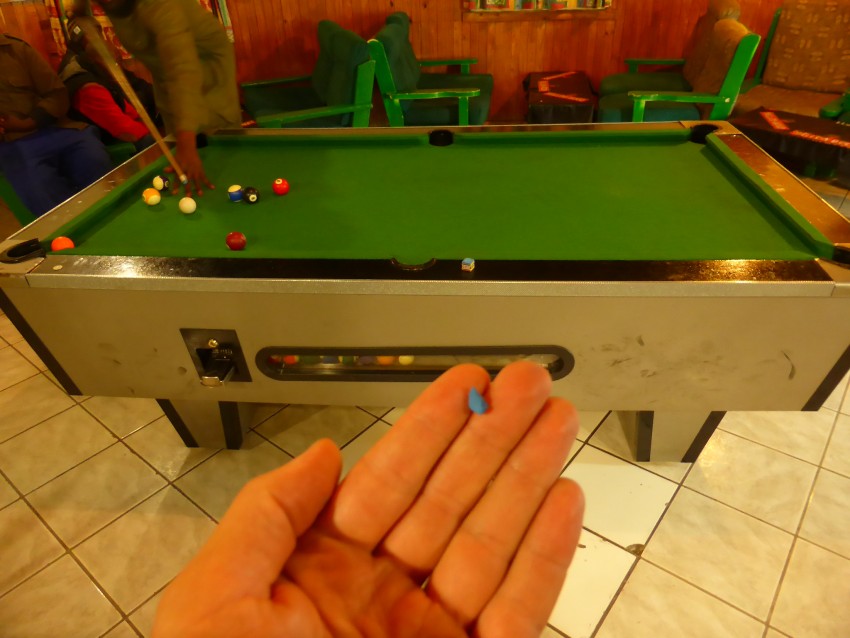 The crumb of chalk that I was supplied with to play pool with my new friends in the bar.

At 23:00, the generator shut down, the lodge went dark and everyone went to bed.  That certainly is a way to end things and get everyone out of your bar.

* I do not watch football, and I do not believe in Jesus.  Those things combined are nearly too much for the average African man’s mind… 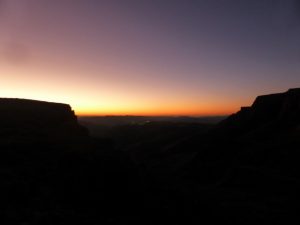 The sunrise colors sure make a bright day. 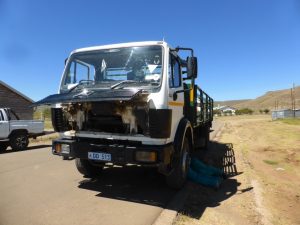 Mechanic-ing so that we can get on the road. 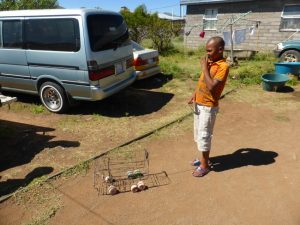 The next best truck driver in town. This boy made this himself. The steering wheel in the back actually turns the front wheels. The sounds of the truck came from his lips though… 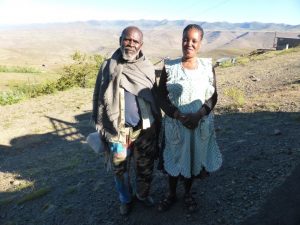 Dropping off maize flour to some locals on the road. She made his pants. I wish I owned them. 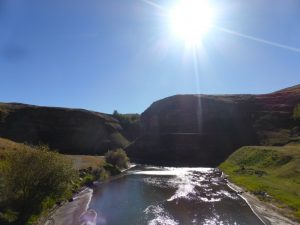 Yea, that is nice. 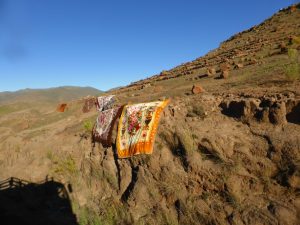 Drying laundry after washing it in the river. 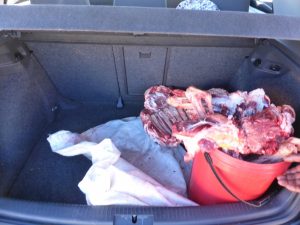 A trunk full of meat. 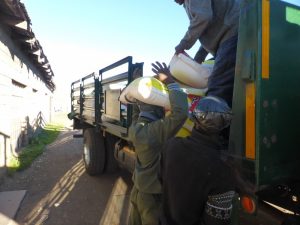 Unloading bags of maize flour at a store. 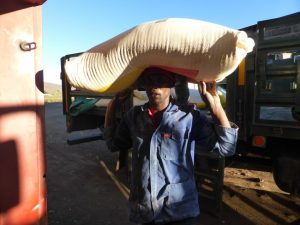 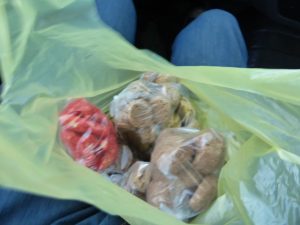 Cookies and a package of Cheezies to toss to the kids on the side of the road. 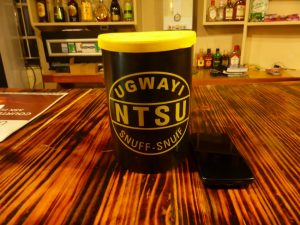 A can of sniff snuff. That is a lot! Look at the size of the can in comparison to my phone. It would take years to get all of that up a nose! 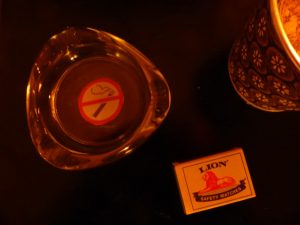 A ‘No Smoking’ ashtray? That confuses me.

“When I left for the evening, I had two batches of stir-fry noodles. I gave one to a homeless man sitting on a street corner. He thanked me profusely and told me that the last person to walk by said, “I hate you,” to him. So, it was nice timing to be the next person in his life, giving him awesome food.”
— Edinburgh, Scotland.
[View All]