March 27
Usually, I think I am pretty sharp and a victor (or at least an equal against the competitors in the game of life)…but I was incapable of counting money about three minutes ago.

The bartender was laughing at me.  Math is one of my strong suits.  I could not make my bills add to 30, and then when I tried to overcompensate that, I made them add to 70.  The bartender wanted to help me.  I told him, “Wow, I am blowing it.  I have been drinking beer all day.”  He said, “And you are have been doing a great job of it.”

I will get into how this day started, but first, let me explain, that I really felt like getting shitfaced all day.  I do not feel mentally drunk, though my math skills would dictate otherwise, but I sure can feel it when I walk.  Though, I can type like I invented the keyboard pattern right now. 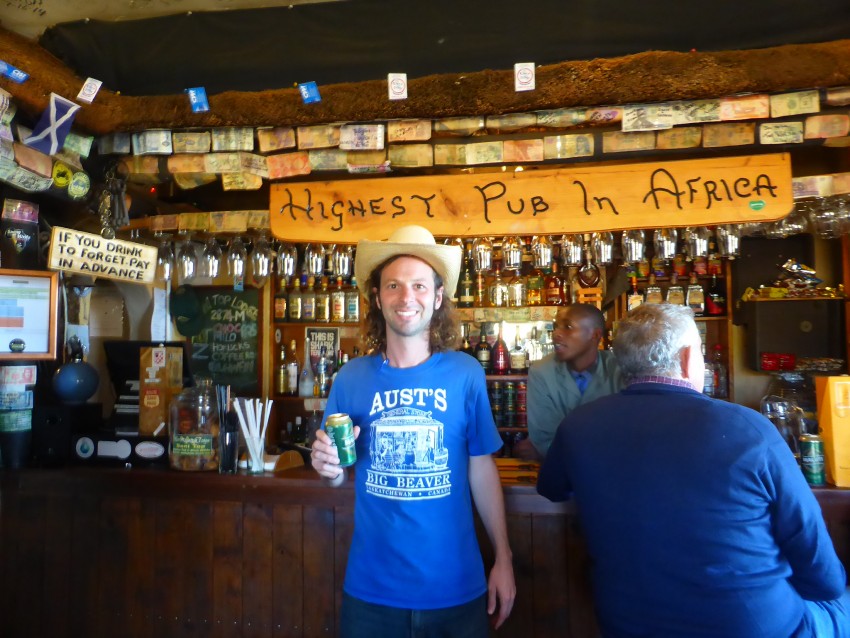 When in the highest pub in Africa…

It has just been a super long time since I just felt so comfortable in a place to just let my guard down and get smashed.  Right now, I am on the top of Africa.  Really.  I am in the highest pub in all of Africa.  I am at Sani Pass, which is in Lesotho, but it is actually on the South African side of the border.  I came here because someone advertised to me that it was the tallest pub in Africa.  I had also heard how beautiful it was.  Now, I am on a runaway.

It is just a really cool pub. It is safe. It is comfortable. There is a fireplace burning the right side of my face and they have a place for me to sleep not far away.  This place, the Sani Lodge, is just too cozy.  The staff is great, good music plays, and when is the last time you got to hang out by an open fireplace?

I paid manager Brian, a really nice man, for the last bed available about four hours ago. I have not bothered to check into the room or take my bag out of reception.  I will jump that hurdle later.  Staff will either think I am funny, or a nightmare, when they have to help me to find my bed.  Either way, life is a blast right now. 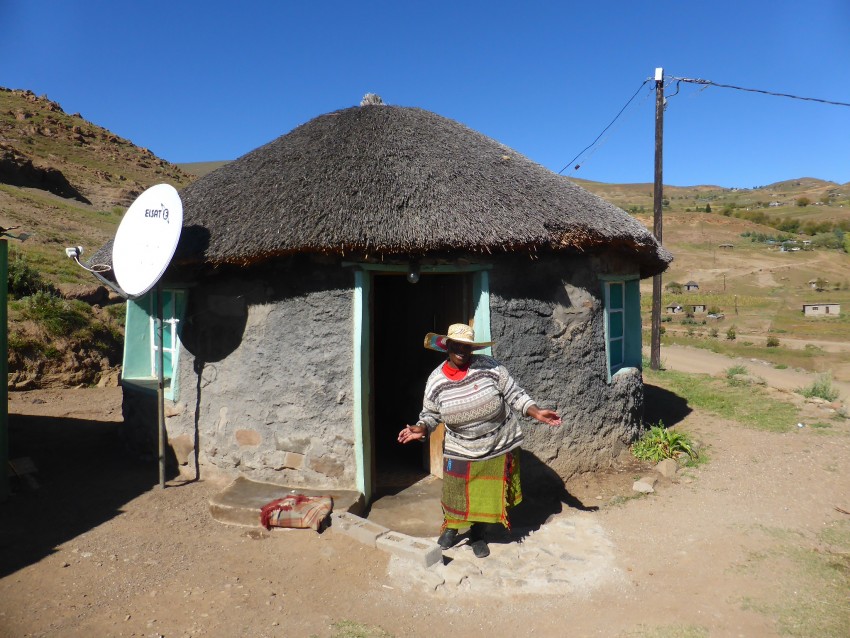 I befriended her on my walk. And then she gave me this pose. This is her rondavel, including satellite dish accessory.

I woke up in a guesthouse on the side of a hill in a place where I have no idea where I was and I could probably never find it again.  It was where a semi dropped me off last night.  When I woke up, the South African father, wife and daughter were already awake.  But, not only were they awake, but in my slumber they had taken care of me!  As I unknowingly walked from my room towards the outside to see if life existed, I noticed that there was a plate in the kitchen area of the house where we were staying at. On it was a piece of toast that was holding up bacon and a cooked egg.  I hoped that I was in the presence of wonderful humans who might be the kind of people who might cook breakfast for a stranger they did not know, but knew of his existence by his late night arrival… 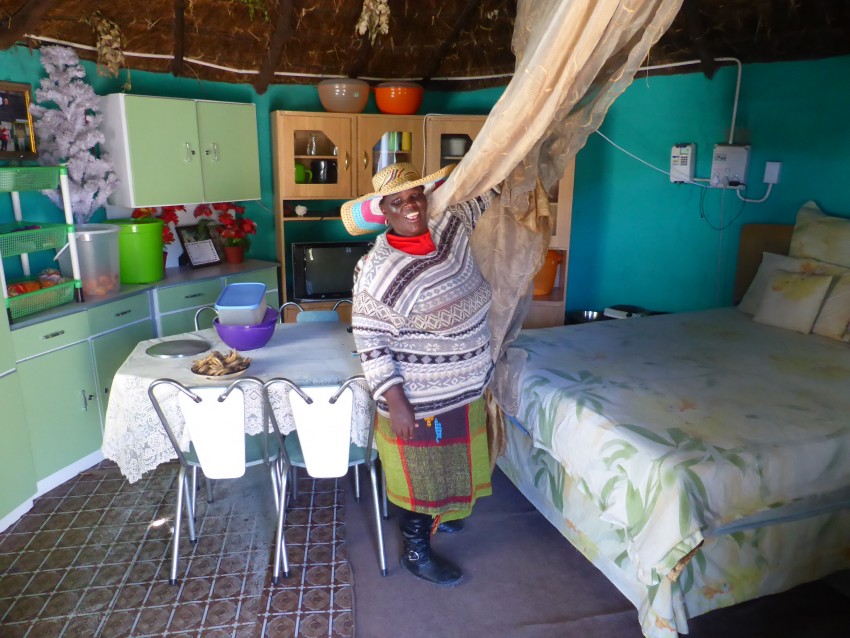 Yeah, this is the inside of her rondavel. I had no idea that the insides of these places could ever be so nice.

Well, life is wonderful and it is full of great humans that take care of other humans.  As I went to visit with the father and the daughter on the terrace, the mother came to me with a plate (the one I had spied) and told me she had prepared breakfast.  Had it not been too forward, I would have kissed her on the cheek for such a gesture.  Wow, I love people who are in tune with the awesomeness of life!  They are not everywhere, but when they appear they shine like Sirius who wins the battle in the sky every single night. 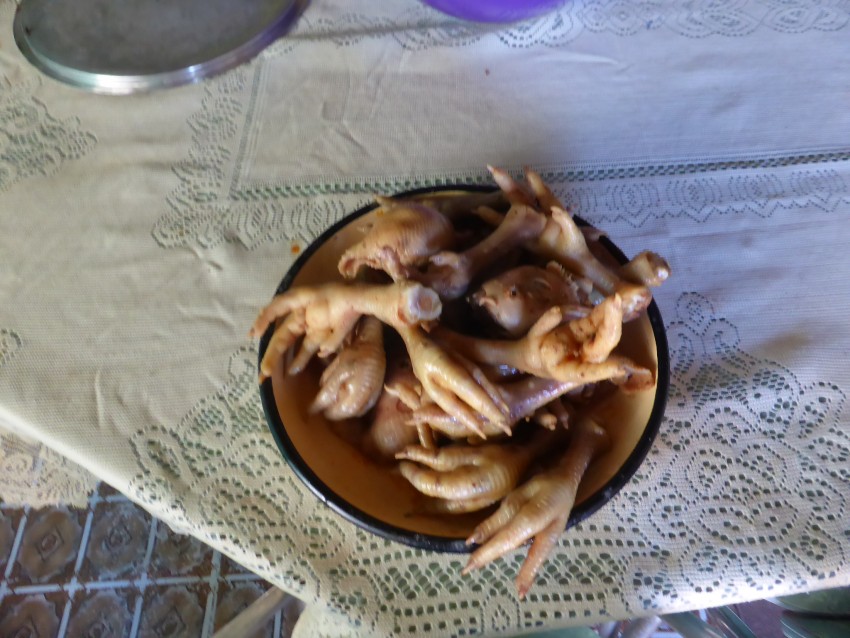 I chatted with my new friends until 10:00 and realized I needed to get moving if I was to cause a ruckus somewhere tonight.  So, I walked to a road to try my thumb at hitchhiking…unsuccessfully.  There were not cars going my way on Easter Sunday.  Church was apparently not the way I was heading.  So, I used the only other means necessary that I had at my disposal…a pair of “The Who” edition Union Jack Converse shoes.  We walked for about four kilometers, into a deep valley and then up the other side.  Going down is always nice.  Going up is always so bad that it if going down is a +10, then going up is a -15 on the 10-scale.  It sucks and you are left with a -5 overall from your experience which is actually enough to denounce half of the happiness that going down offered.  Then, you have to also deduct a -10 of spread and you realize that dealing with valleys with a huge backpack ranks bad enough on the suck-scale that if it were a sports player, you would trade it from your team. 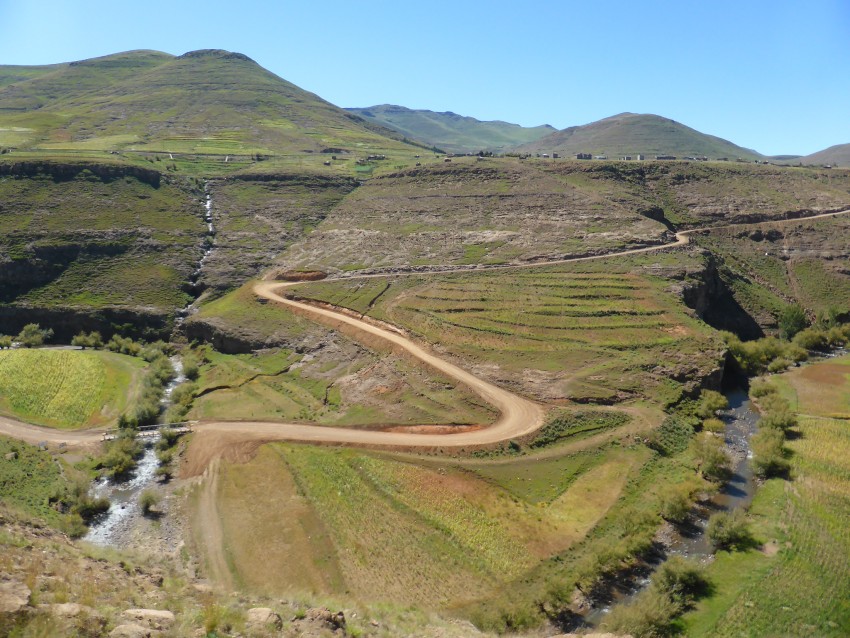 Hiking this entire road because no one was driving on Easter Sunday.

When I eventually reached a t-intersection that would give me the option of going into the town of Mokhotlong or going to Sani Pass instead, I hitchhiked a ride to Sani Pass with a really lovely woman and her family.  I am not sure what was going on, but she was driving and her husband was in the back seat.  A woman driving her husband has never happened once in the history of time in Africa.  He must have done something really bad… 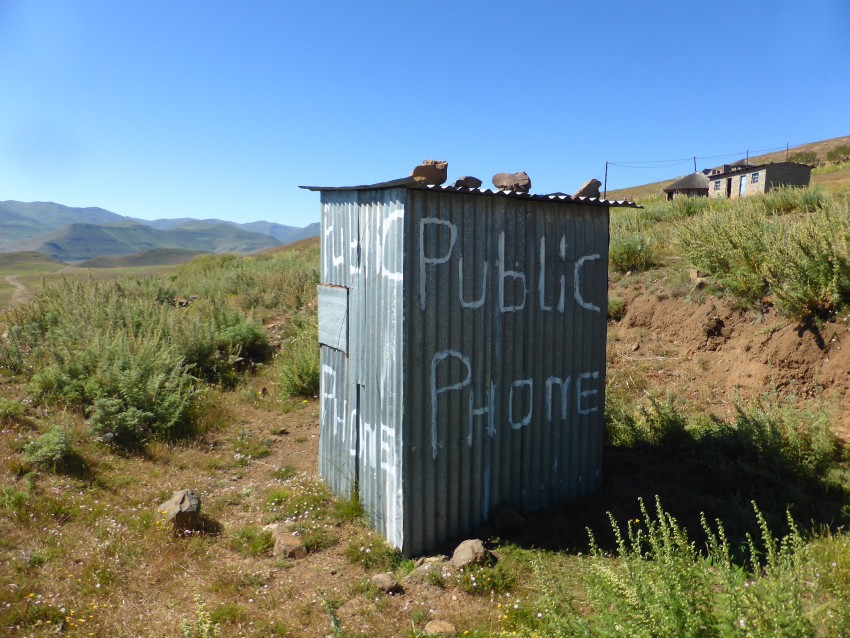 We stopped in a village on the way and as I was sitting in the van and waiting for the family to come back from what they were doing. A pick-up truck of drunk Easter celebrators pulled up so close to us in a hurry that it smashed mirrors with the one on the driver’s side of the van I was in.  The driver got out and he was apologizing to me.  It had nothing to do with me, but his eyes were glossy.  Now, being drunk and driving is one thing, but being glossy-eyed and driving is another.  His passengers all had bottles of beer in their hands when they got out.  They offered me a ride to Sani Pass.  I declined. They apologized to the lady who owned the van.  She was care-free because her mirror had not smashed.

The lady drove me to Sani Pass which is right on the border with South Africa.  There sits the highest pub in Africa and apparently there is a backpacker hostel which I guess I will make it to at some point.  I decided to have a beer and a bite to eat.  The views were so nice and I talked a lot of nonsense to everyone who showed up at my busy table. I was enjoying myself so much that I decided to have more beer.  After four, everyone in the place seemed to like me.

I decided that I just wanted to get smashed.  In the middle of this decision, I figured that I needed to go down Sani Pass on the South African side as it is supposed to be one of the craziest drives in the world.  Immigration did not even stamp my passport as I said I would be returning, and they let me carry my beer through.  I have not crossed through immigration with a beer in my hand hassle free in my life. I even made the immigration officer take a photo of me doing the deed.  He liked my enthusiasm. 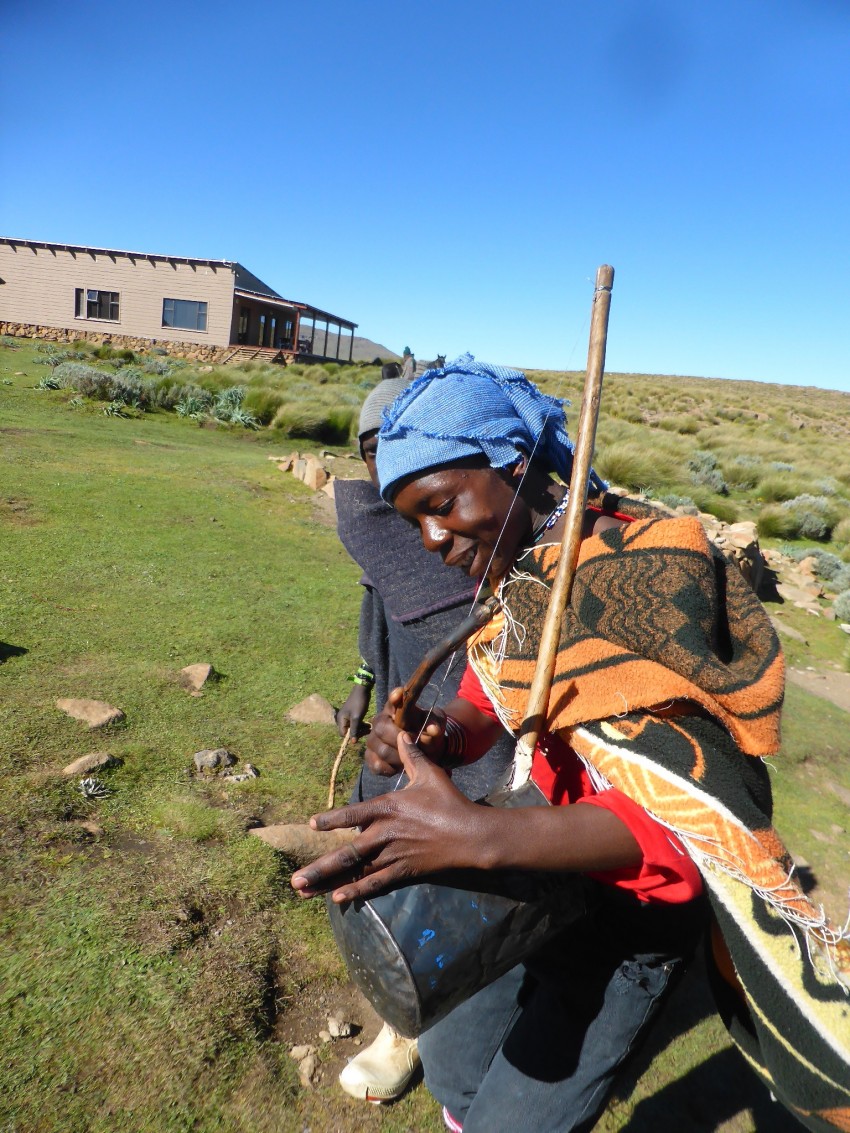 So, he is playing a bucket, attached to a handle with a wire strung on it, and the bow is a twig with string across it. Wow!

I hitchhiked my way down a very very crazy road, said hello to some sheppards, and then hitchhiked back up.  It was an impressively scary road to be in a vehicle in.   Actually, it was dangerous on my feet as I walked down it before I caught a ride. 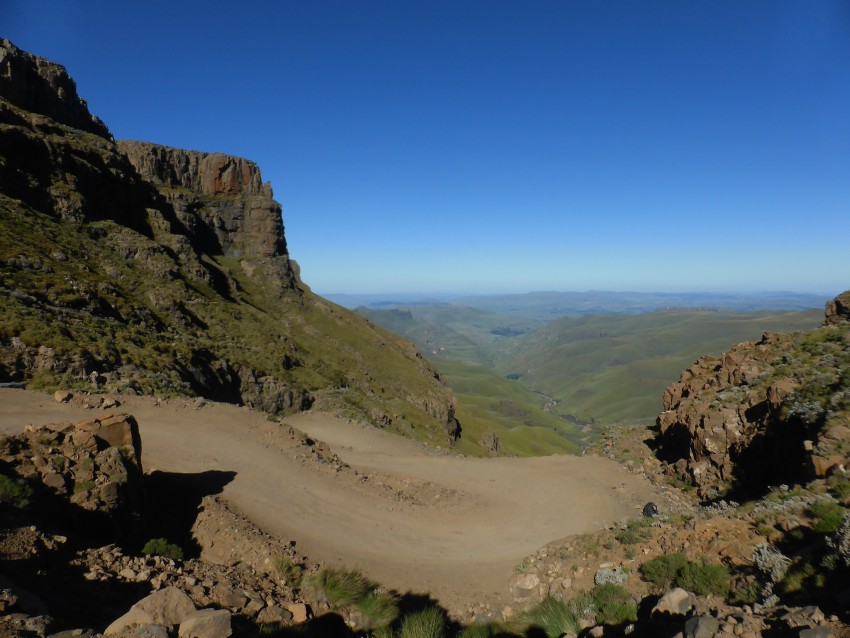 The Sani Pass road. It is supposedly one of the tightest hair-pin curved roads in the world.

When I got back to the place where I had come up with the idea to hitchhike down and up, I started drinking a lot more beer, and, here we are…  I have to go.  There are people around that I should probably befriend.

Talk to you tomorrow!
Your friend,
Beaver 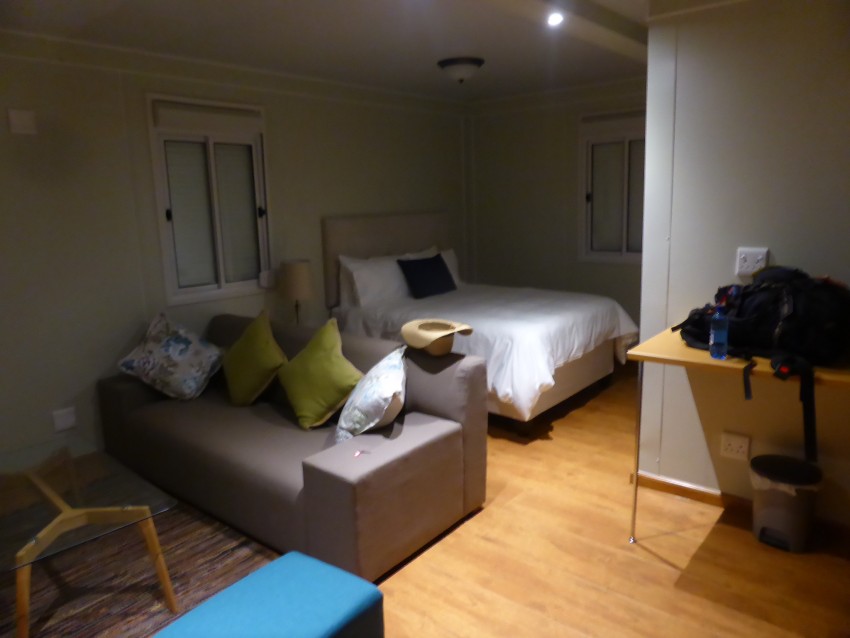 Quite an upgrade from a dorm bed. The perks of charm, getting smashed and travel journalism.

Update:  I was the last person to leave the bar.  As I was to head to my room, a manager Brian told me that they had moved me to another room, one closer to the building we were in.  I said, “See Brian, if a man sits in a bar all day and drinks beer, life just has a way of working out!”  A porter walked me to ‘Unit #1’ and when we arrived I was not in a dorm, but rather a super nice housing unit for myself.  It had a really nice bed and a shower with four towels (believe me, you take note of how many towels are available when you realize you left yours behind in Swaziland), and a couch!  A couch!  That was a very nice treat.  I never sat on it, but had I wanted to, it was there! 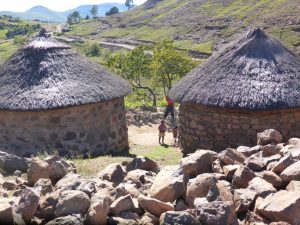 These kids, the came running out to me, and as soon as I pulled out my camera they scattered! 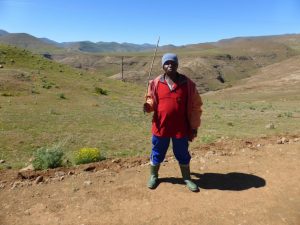 Herdsman I met while hiking. 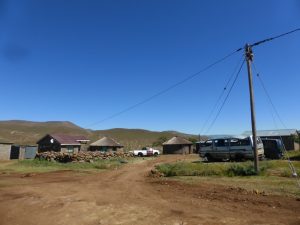 A little of everything in a Lesotho village. 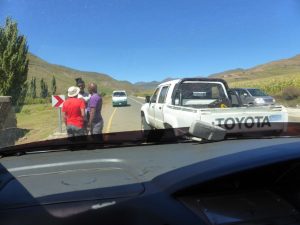 Right after the very drunk driver in the white truck clipped the mirror of our van. 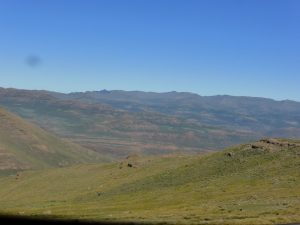 The scenery of this country… 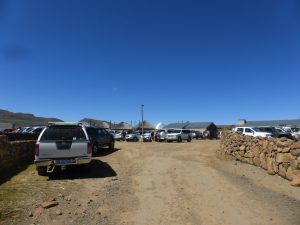 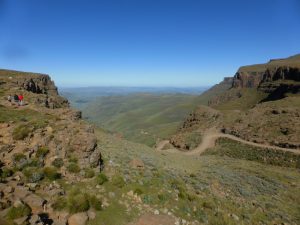 The view from Sani Mountain Lodge. 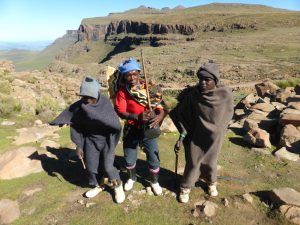 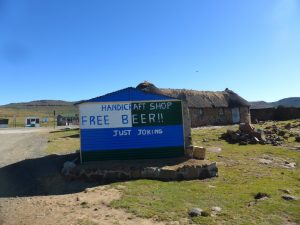 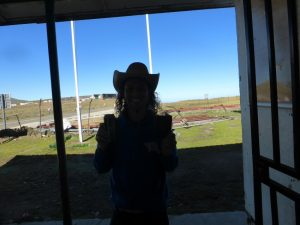 Photo taken by the immigration officer who enjoyed how excited I was to be crossing a border with a beer in my hand. 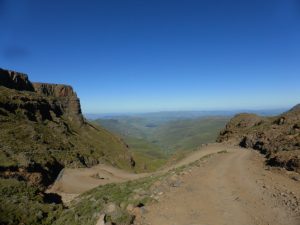 The look of South Africa from Sani Pass. 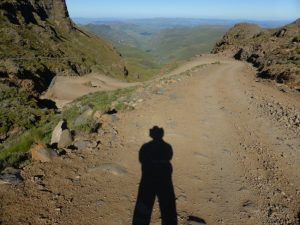 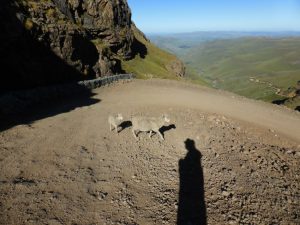 I told the girls I was not up to any mischief, but they were in a hurry to get away anyhow. 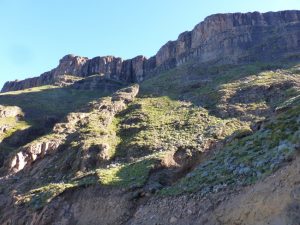 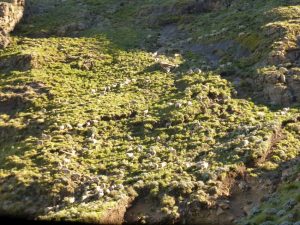 Those white dots are sheep being shepparded in for the evening. 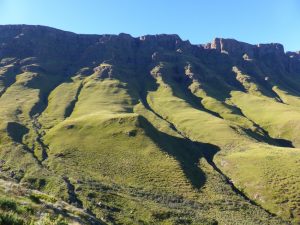 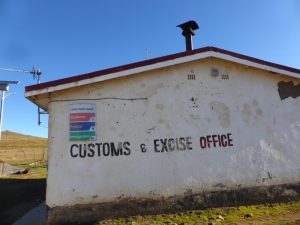 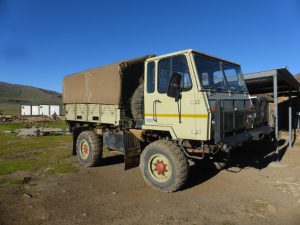 Badass. I wish I was driving that thing, without having to be a soldier…. 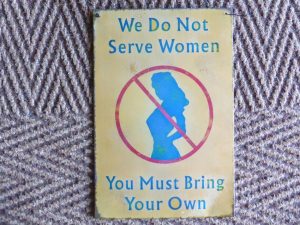 “I was talking about it earlier today how the most special thing about Africa is that people have time for each other, something I had not realized we are now lacking in our own society until I noticed the difference here. People make time for each other.  It is like life was in the western world 20 years ago when people actually spent time with each other.  ‘Socializing’ here is so unlike where we are today in western culture where people send text excuses about why they are too busy, or worse, sit around together staring at their phones after meeting up.  I have been talking to the locals and I tell them that we have a higher standard of living, but we have a much lower mental connection and our sense of community is really disappearing which something I have been making clear to them is a very beautiful thing they have here.  It is pretty wonderful to be with them to sit in a circle on logs under a tree and talk about what the day was with the people that matter in their lives…”
— Life in Tanzania
[View All]