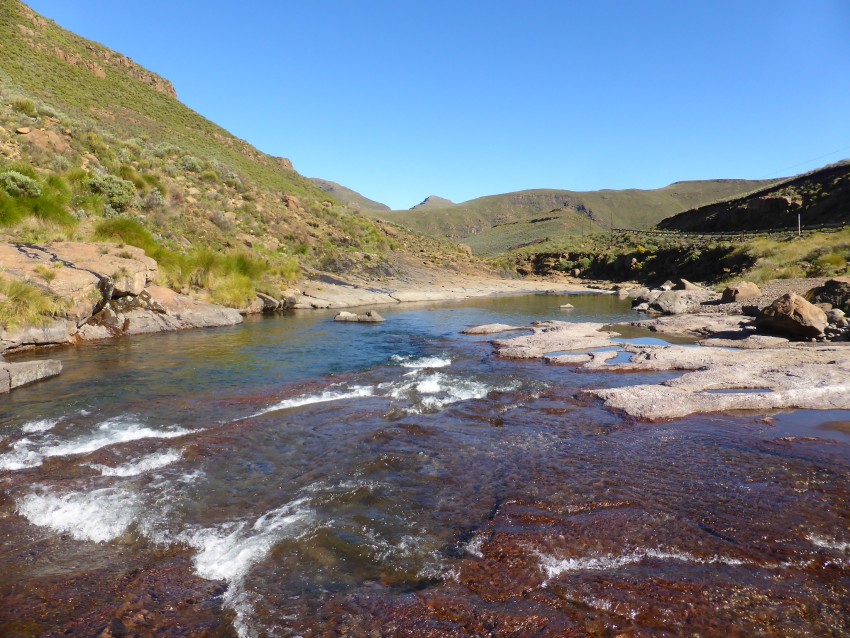 Just outside of my lodge. it sure is pretty.

March 29
Another three country day.  Those are pretty big days…  And rare days, though I have had two of them in about a week…

I was up early at the New Oxbow Lodge and out on the road by 08:00 to try to hitchhike my way out of Lesotho.  I do not want to leave this country at all.  Lesotho is this perfect little sweetheart that does nothing wrong and only makes you happy.  The people are wonderful.  People respect me here and no one ever ever bothers me here to hassle me for business.  It is a paradise in Africa.  I have said that people do not really bother me in Rwanda, and people did not really bother me in Livingstone, Zambia. But here in Lesotho, not one person hassled me for anything.  People wanted to meet me.  The country is a breath of fresh air. 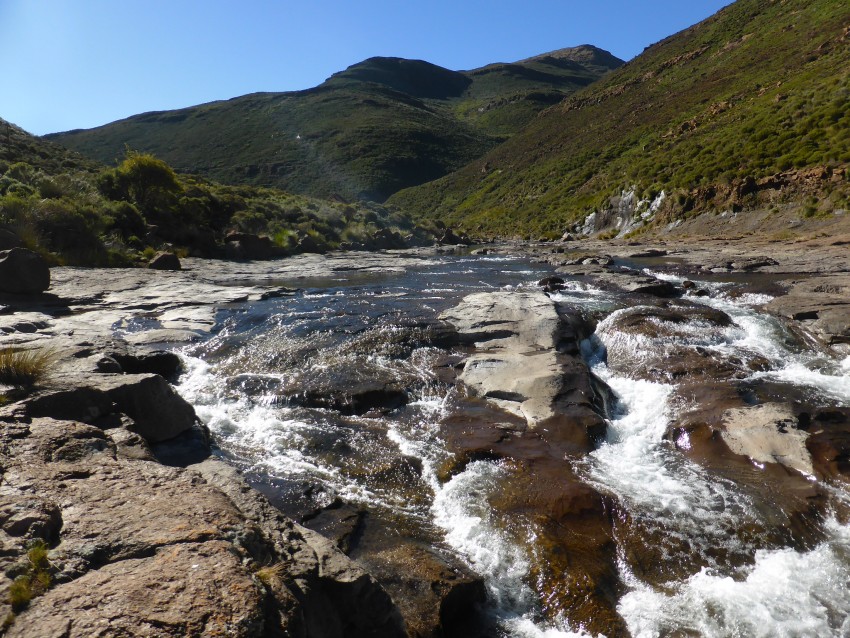 I will miss you Lesotho. You were wonderful! This was the river just outside of my lodge in Oxbow.

At the same time, there are faults.  As I stood on the road at 08:00, any new vehicle painted with a business logo that passed was driven by a white man.  They were heading to the diamond mine down the road from Oxbow.  Any beat up vehicle coming down the road or any mounted horse that passed me by was driven by a black man.  There is no balance on this front, but then again, this entire continent is the same… 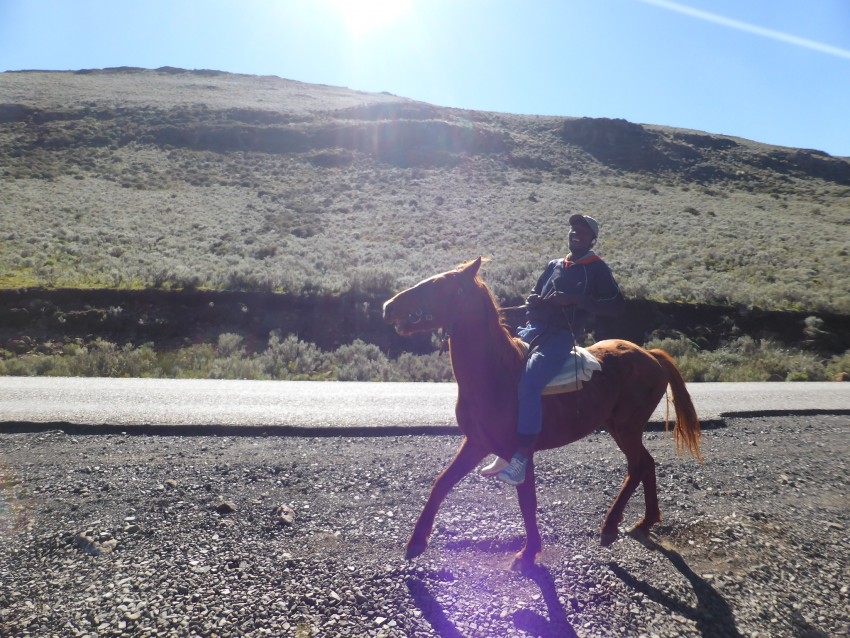 One of my pool playing friends from last night on the most common countryside Lesotho transportation.

FYI – A diamond mine takes up a lot of space.  I was amazed by the amount of earth they were uncovering just for something as small as a diamond.  I would have thought it was just small little holes they were drilling straight down into the ground, like the opal mines in Coper Pedy, Australia…but no, a diamond mine uncovers earth in open excavation like a coal mine does.

It took a while to catch a ride, but eventually a couple from Mokhotlong picked me up. They gave me a ride to the Butha Buthe, where the border to cross into South Africa from the top of Lesotho is located.  I did not want to leave… 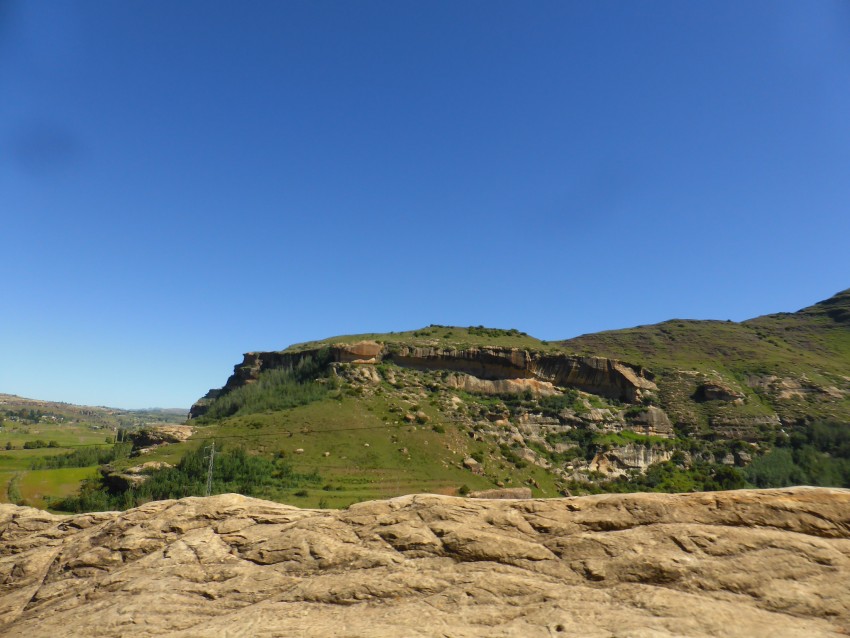 I love how raw and rough Lesotho is.

A police check was set up on the road and my driver told me to put on my seatbelt.  Africa is funny.  Ahead of us was a pick-up truck, for a driving school of all things, and there were at least seven people in the back.  As long as the people in the cab are wearing their seatbelts, it is no problem… 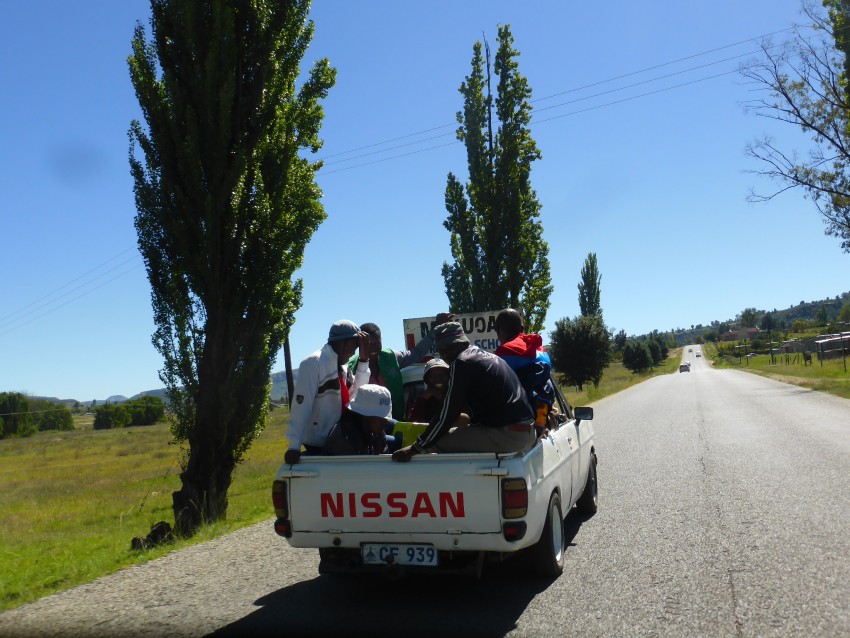 This is a ‘Driving School’ truck. Everyone seems to be learning from the back…

“And what what and what what…,” is a Southern African expression to say, “But, you know what I mean…”
We arrived at the border and I was stamped out of Lesotho and stamped into South Africa.  I was really sad to leave Lesotho…  Lesotho is like meeting a beautiful woman that you spend some days on the road with, who you really connect with mentally, and you can not get enough of her.  But, you are obligated to go in different directions and will probably never see each other again…

I found a mini-van-taxi that was going directly to Johannesburg for 220 rand ($14.70).  South Africa is a strange land.  It is a country that is mostly thought of as white by the outside world, but it is mostly a black populous. The country is a real mash-up of everything that cannot be defined as one thing.

As we drove through town, I saw the first McDonald’s I have come across since I was in Europe in December.  It is sad how, South Africa, this country that is sort of Europeanized, is by far the most dangerous country in Africa.  Somehow, we truly make a mess when we meddle too much in other people’s lives… 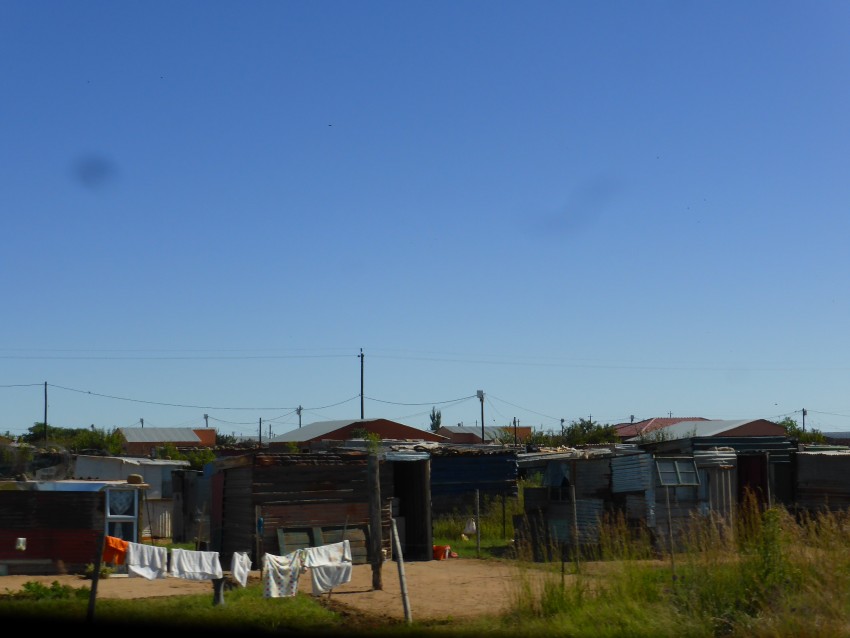 The slums of South Africa. There are so many of these on the drive through the country.

Traffic lights are called “robots” in South Africa.  That will confuse you the first time.  “Turn right at the first robot and left at the second robot…”  What?
Once again in Johannesburg, I got lucky when I got out of one convi-van-taxi and I got the last seat in another to haul me to Botswana, 240 rand ($16.00).  As we were leaving Johannesburg, we stopped at a fuel station and when I went to pay for my snacks, I had to drop them into a metal box like one would do in a bank.  A man behind bullet-proof glass transferred the snacks to his side of the glass, scanned them, waited for my money to be dropped into another top box designed in monetary size, and then he slid the change and the snacks back to my side.

It is sad that people have to live in this kind of fear.  It has rubbed off on me and it is the reason I have left Johannesburg as soon as I have arrived from both Swaziland and Lesotho.  My friend’s girlfriend’s mom was just hijacked a week ago when a car followed her into her compound! One man held a security guard up at gunpoint and then another trapped her in her car and beat the hell out of her.  They hospitalized her and got away with 80 rand ($5.35).  Something needs to be done here to make this country safe again.

The convi-van-taxi kept on overheating on the drive that took us 8 hours to get to Gaborone, Botswana. The driver had to keep on stopping to add water. It was crazy hot in the van.  I must run at a higher temperature than Africans, as I sweat in the convi-vans, and if I do not ask, no one would ever open a window.  I refer to the vans as “Highway saunas.” 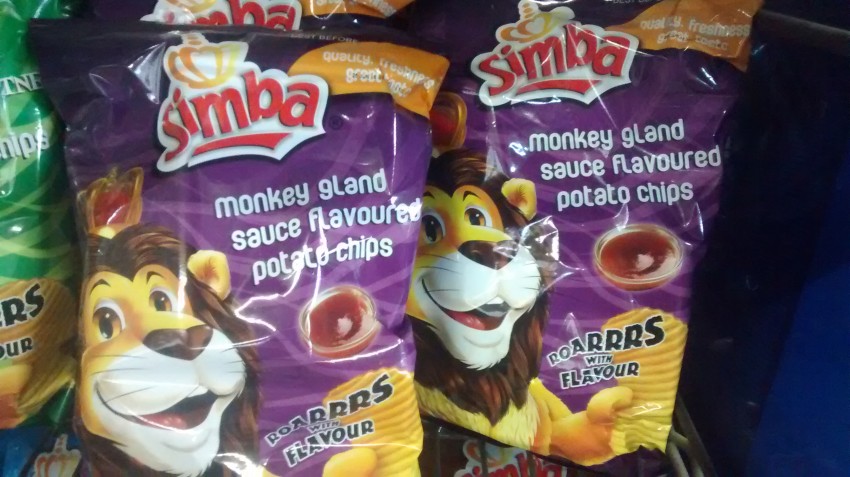 Mmmm. Who doesn’t like the taste of monkey glands?!

Between South Africa and Botswana, one has to walk through pitch black dark at night through No Man’s Land.  It is pretty scary.  A lady waited for me outside of immigration after we left South Africa to walk towards Botswana together because she did not want to walk it alone.

As the convi-van-taxi pulled into a fuel station in Gaborone, Botswana, at midnight, about 15 touts mobbed the vehicle.  I was the only Caucasian and when I got out they were on me like fleas, yapping and yapping, telling lies about how they had talked to me at the border and they would give me a taxi ride and bla bla bla…  I had to shoo them away to give myself room to breathe.

One of the touts was too in my face…the one who had told me he had already talked to me at the border.  I had not talked to anyone at the border.  I told him, “I do not like you and I do not trust you because you are lying to me already.  I will never get in a vehicle with you so stop wasting your time with me.”  The lady I had earlier walked through No Man’s Land with took pity on me and was trying to get the touts away from me.  “The Liar” tried to get close to me again.  I stopped moving and said, “You!  Get away from me!  GET!  I do not like rats!”  His tout buddies really laughed when I called him a rat.

The lady who was taking care of me hustled me into a car with her husband, who was waiting just to get me away from the scumbags.  The couple, who were wonderful, drove me to a guesthouse in Gaborone.  It was the only place they could think of to take me to.  It was about 00:30 at the time and the guesthouse wanted 400 Botswana Pula ($36) for a bed.  It was far too rich for me and the man would not bargain down no matter how hard I tried.  I told the wonderful man who had driven me to the guesthouse that I would not stay for so much money and told him to leave me.  I did not want to make him have to take care of me all night.  I told him I would go to the bus station, get inside of the building and wait for five hours to catch the first bus out of town.  He did not want me to do that, but I did not want to spend $36 for a few hours of sleep.

The Botswana man, retired and so nice, handed the young desk-boy 200 pula ($18) and told me that he wanted me to stay there for the night.  I am running out of money, but I am not so broke that I need someone to pay for half of my room, but he insisted and would not take his money back.  I told him it made me feel uncomfortable.  He shook my hand and told me not to worry about it.  I thanked him profusely.  He got in his car and he and his wife drove home.

Good people are out there….

“'Omerta' by the band Lamb Of God ‘Whoever appeals to the law against his fellow man is either a fool or a coward Whoever cannot take care of himself without that law is both For a wounded man will shall say to his assailant "If I live, I will kill you. If I die, you are forgiven" Such is the rule of honor’ Wow!”
— Lamb of God
[View All]