March 21
I said goodbye to Maritza in the morning and then Toby drove me into the center of Johannesburg.  The city is a massive, sprawling, urban area built of clusters of suburbs.  There are huge areas of population and then there are green areas with a forest. Then, another patch of city. The, more forest as you blast through it all on a freeway at 120 km/h.  Johannesburg is a very pretty.

2,000-3,000 curious tourists visit the museum each week
.Toby and I went to “The Museum of Man and Science” also known as “Kwa Zulu Muti”.  The word “museum” is misleading as it is actually a bizarre store for traditional healing (no one likes the word witch-doctor!).  The building has walled shelves of full grown herbs, spices, animal antlers, animal hides, dead and dried birds, ostrich legs, pottery and shields for traditional dance.  The store had a very strange energy.  Toby said that it feels a little like an abandoned hospital feels where many people have died.  It was certainly something different from the normal state of existence… 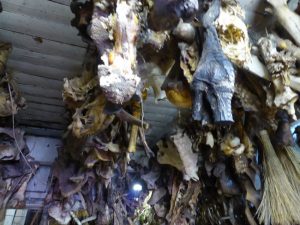 A lot of weird hanging from the roof. 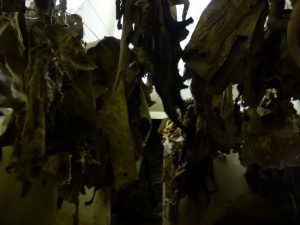 I found a lady running the store and asked her to give me some guidance on the place.  She told me that they have potions for cleaning the body and for chasing away evil spirits.  They also have potions for washing and rubbing onto your body to bring luck.  My interest began to rise.

I inquired with the lady about “Rolling the Bones” to give me some insight to my future.  She told me that the people who normally perform this practice were not presently around, and, “Because you are white, anyone else is likely to rob you.” 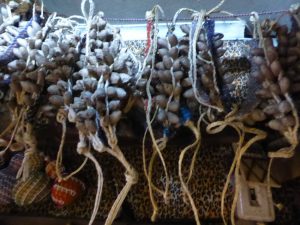 I am not sure what we are looking at here…something from a garden though I think. 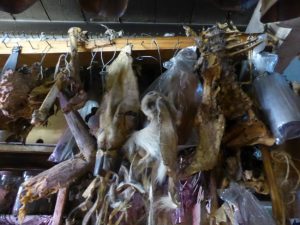 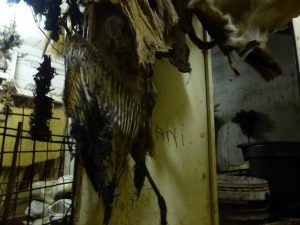 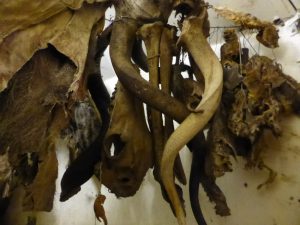 Antlers to be ground up for potions.

An older lady seemed to be in charge of the store.  I asked her if she would talk to me some as I wanted to know more about what she could offer.  The older lady said that she did not feel like talking, pointed to her daughter that I had been talking with and told me to have a conversation with her instead.

I figured that I might as well make a small investment…just in case.  I told the daughter that I am a journalist trying really had to get a career moving and asked her if she had something for me to possibly help propel things and to keep me safe as I venture though the world.  The lady spoke to her mother who told me that she could make a potion for luck and for protection.  The price…250 South African rand ($16.35)…a small amount for such a possibility… 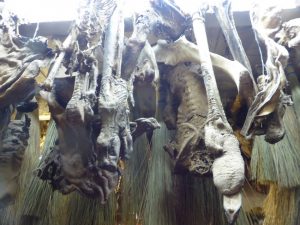 I think we have an ostrich leg here, but I am no expert. 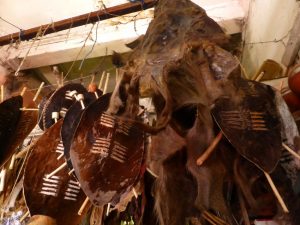 A younger girl produced several vial/bottles for me to choose from, one of which they would put the potion in that I would wear around my neck.  The mother took it and disappeared into a back room and I could see her putting powders together on a counter.  When she returned in some time, she set the vial she had filled on the counter and then she made a concoction of powder ingredients that she put onto a piece of newspaper.  The ingredients/powders were of different colors that distinguished them from each other.  She set them on the counter beside the vial and told me, “Take this for seven days.  Put it in your bath water.”  I told her that I only shower as I am in hostels.  She said, “Then take a spoonful of the powder, wet it, and rub it into your body as you shower.  You must speak at the same time and ask for what you want.  You must believe in it to make it work.”  I asked her if there were animal parts in the wash.  She told me that it was a mix of salts, powdered herbs, burned herbs, and Indian ash that has been blessed.  Some of the names of the ingredients were (my own spelling on her pronunciation):

She wrapped up the “soap” in the newspaper and put it in a plastic bag.  I asked how long the wash powder would “last” once I had used it all, “A lifetime?”  She said it would not be a lifetime, but it would last for a while.  It is difficult to know what “a while” means, but she told me to come back in May before I fly back to Europe to let her know how it is going.  I told her I was unlikely to return to Johannesburg.  But, I like her confidence that she wanted to know results… 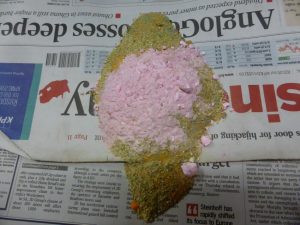 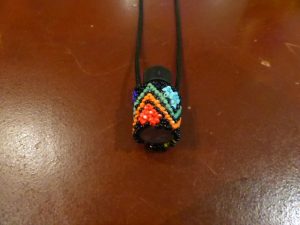 The older lady pointed to the vial on the counter and told me to keep it with me at all times.  I told her that sometimes it might not be on my body, but that it would be in my backpack.  I asked her if that would be alright.  She said it would and told me to not wear it during intimate times of romance because a lover may end up stealing my luck.  Point noted…

A couple of minutes after I put the potion-containing vial around my neck, I felt warm sensation in my stomach. There was some kind of heat coming from the center of my torso that I have never noticed before.  I also had watery eyes so I asked the lady why I felt emotional.  She went behind the counter again, put some things together and gave me a small clear container similar in size to one in which you would receive a prescription from a doctor.  She told me that it contained:

She instructed me to put a pinch of it on my tongue once a day.  I asked her what it would do.  She told me that it would open up my emotions.

As everything was being wrapped up, the daughter told me that I was not to thank her and that I was just to accept the things I had paid for that she was handing to me.  I shook her hand, shook her mother’s hand, and told them that it was a pleasure to meet them.  Toby and I walked out of the store.

Driving around the city after we left the museum/traditional healing store, a mounting sensation of a highly emotional state continued within me.  It was strange.  I was talking with Toby about it.  He asked me what I was going to do.  I told him that I would just ride all of it out and see where it all took me.

Toby and I drove across the Mandela Bridge and then he took me to Park Station where we shook hands goodbye and I got the last seat in a 220 rand ($14.40) mini-van taxi destined for Mbabane in the Kingdom of Swaziland.  It was a four hour drive.

With no idea where to go once I arrived in Mbabane, I found out about a place called Legends Backpackers located about 13 kilometers from the capital in the Ezulwini Valley where the Royal Family lives.  Someone helped me to get to the correct mini-van taxi for the valley so that I would not be cheated and I was dropped off on the side of the road, in the rain, in the darkness of night, in the countryside, and the direction which I was supposed to walk was pointed out to me.  For two kilometers I walked down the road in the dark and was soaked when I arrived at the hostel.  A room.  Food.  Beer.  Bed…

Hopefully today is the start of something very big!

Check back in two months.  If a career is really taking off at that time, I will tell you how to get to where you need to go…. 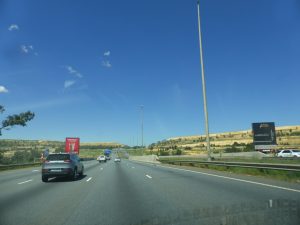 Driving through Johannesburg. The tailings from the mines on the horizon. 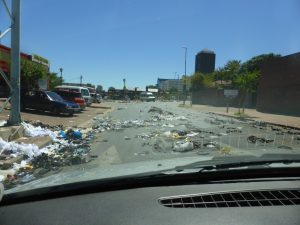 Garbage collection strikes sure are unpleasant to a city’s image. 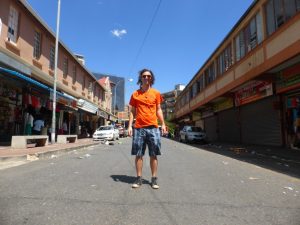 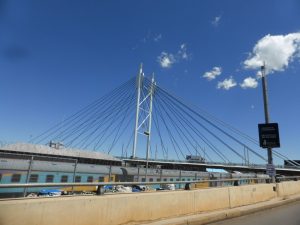 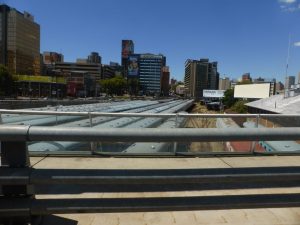 The trains below Mandela bridge. 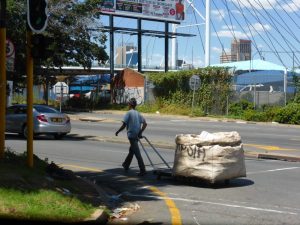 The ‘Trash Surfers’ of Johannesburg. They have taken on the role of earning an income by recycling waste and keeping the city clean. And they look cool with their trolleys as they move through the city conducting their business. 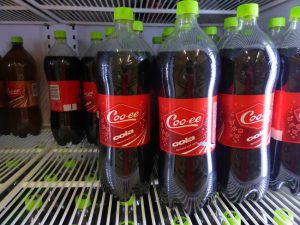 Wow, that is a pretty good try to be Coca-Cola.

“It is a good thing that Metallica decided to suck and wanted to become mainstream in 1991.  If it had not been for that, I would have not have had so much exposure to them, and I would not have gone through their back catalog and I would not know just how incredible they were and I would only know them about as well as I know Pantera today, which is hardly at all, and that is not good enough.  So Metallica, thanks for going through a suck so that I could be exposed to how much you rocked.”
— Self Realization
[View All]