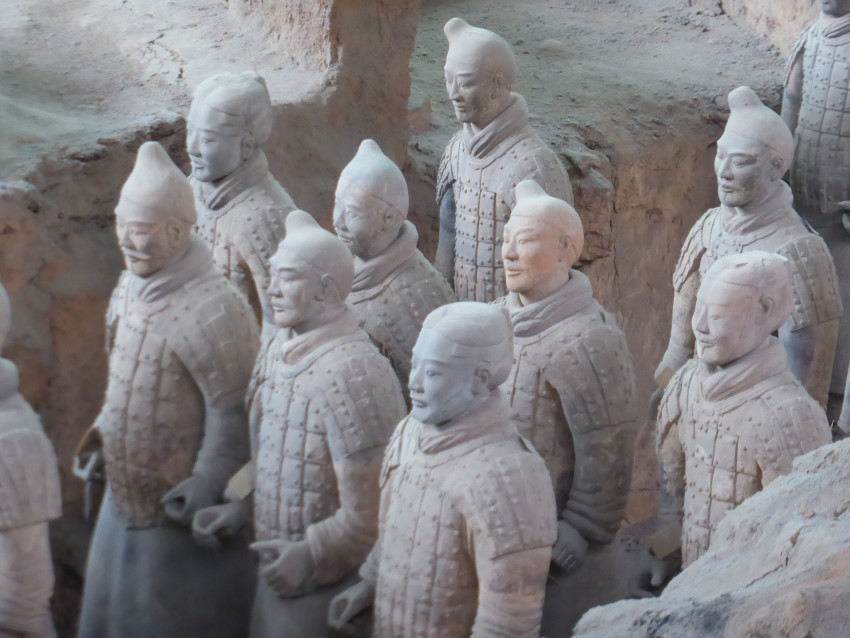 Each Terracotta Warrior has a different face.

I was up and on four hours of sleep when I had to hit the shower at 08:30. I was not sure if Markus was going to make it back to the hostel in time for our pre-booked Terracotta Warriors tour in China.  In the middle of my shower, there was a knock on the door. He made it! Good job buddy!

Markus and I got into a van with ten others and a guide for 268 RMB ($40) – ticket inclusive – and drove for an hour to where the Terracotta Warrior pits are located.

The reign of Qin Shi Huang reign was 37 years long and in the years in 221 BCE, he completely unified China. The Tomb of Emperor Qin Shi Huang took four decades to build and required some 720,000 workers. It is the biggest tomb in the world and is actually a giant hill that has been completely landscaped. The tomb is lined with mercury so that anyone digging around will be poisoned, which has resulted in it being saved it from human entrance to date.

The Tomb of Qin Shi Huang.

Emperor Qin Shi Huang had the Terracotta Warriors built to protect him in the afterlife as he believed that he would still be able to rule and govern from the heavens. One year after his death in 210 BC, the warriors in the pits were sacked and set on fire by rebel groups. It is easy to assume that the commoners did not approve of the emperor or the warriors that he made them create.

The 8,000 warriors are beautiful, unique to each other, and a wonder to see!

Here are some fun Terracotta Warriors Tour in China facts photos for you!:

The Terracotta Warriors were found by a farmer in 1974 when he was digging a well for water only 1.5 meters below the ground. That turned out to be pit #1, the largest of the pits. The high parts are the beams from the buildings of the pits and the low parts are the where the warriors are located to be excavated.

What that farmer found turned out to be pit #1 of the Terracotta Warriors, the largest of the pits.  They were created in the Qin Dynasty in 210 BCE.

Archaeologists work from 18:30 through the night while the area is closed to the public.

Are you a child who LOVED to put together puzzles when you were younger? An Archaeologist future is probably not a bad idea for you!

Warriors are clay baked and they are hollow inside.

There are 8,000 Terracotta Warriors.

Each Terracotta Warrior has a different face.

The warrior’s faces were based on workers, so it is assumed that 8,000 people were killed so that the secret of the warriors would remain. Many bones have been found on the site.

Pit #3 had warriors with no heads because the emperor died while they were still being made.

Most of the Terracotta Warriors face east to greet the rising sun.

All of the warriors were originally painted, and they still are, but the paint oxidizes and disappears within 30 minutes of them being unearthed. (Photo of a site photo.)

The farmer was given 10 RMB by the government for his discovery. (Photo of a site photo.)

It is estimated that it will take 40 more years to uncover the rest of the known Terracotta Warriors. Pit #1 is 30 meters by 230 meters and is estimated to contain some 6,000 warriors itself.

The Kneeling Archer was excavated in 1974. He is the only warrior that still has traces of color which can be seen on the back of his armor.

Unearthed by Qin Shi Huang’s tomb in 1980, the two bronze chariots and horses are thought to be the earliest, largest and best-preserved bronze horses and chariots in the history of Chinese archaeology. (Photo of a site photo.)

Recreated at exactly half life-size, there are two models of the chariot, horses and driver.

Terracotta Warriors Tour in China pose!*
*Both warriors are replicas.

Markus and I got back to Xi’an at 17:00 and slept for two hours and then I went out for the evening. We have been struggling to find a fun bar in Xi-an. The city seems to have changed so much in the past 11 years as so much money has come in. There are hundreds of bars in Xi’an, but there are only a few people in each diluted bar, so no establishments seem to be any fun.

We ended up back in the hostel bar again where we got involved in a game of pool and then found two girls at the end of the night who liked us. One of the girls was Mongolia and one was Chinese.

We suggested they come with us to our room for a party and Markus bought beer.

Markus was giggling like a schoolgirl at our luck and that we had two girls coming to our room so late! The girls smoked cigarettes that they stamped out on the floor of our room, and they played terrible American hip hop and rap music.

Why are girls from China and Mongolia who can barely speak English listening to American hip-hop and singing along like they are gangsters? How has this become a ‘thing’ that people think is cool, globally? If they were able to understand the lyrics it would be a still be awful, but it would make a little more sense. But that they can not understand the lyrics and they are still listening to this awful music like is a complete travesty.

The girls stayed for about an hour and it was fun, but they left not long after we suggested they stay overnight.  Sadly, we are finding that Chinese girls are quite frigid.

“I went to work today and picked on two guys who got drunk last night and slept in. One was found passed out in the other’s room, but they live in the same hotel. So, the whole crew was all over them about that today. One passed out on the couch and the other on the bed, but we ignored that fact. My best line to them today was, “I am surprised you guys slept in and the one of you did not wake up when the other rolled over.” It made for a pretty fun day today picking on those two all day.”
— Working in Fort McMurray, Alberta
[View All]