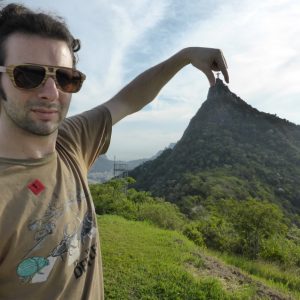 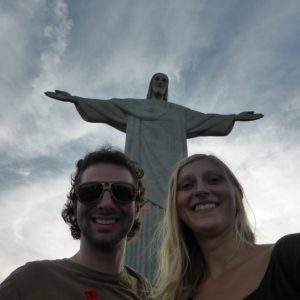 Up at the crack of 10am, Irmante and I made it to the newly located Paraguayan consulate.  The Paraguayans have not all gone home after all!  We made friends with Emilio, who issues visas there and speaks excellent English.  I had to fill out two pages of information for my Canadian nee-Russian passport to be issued a visa.  The paper asked me ‘hair color,’ ‘eye color’ and a ton of other questions.  Under ‘distinguishing features’ I wrote “Handsome,” and handed in my paperwork to the government of Paraguay.  Emilio really enjoyed that.

Emilio told me my visa and passport will be ready for pick-up tomorrow.  Awesome.  We are going to Paraguay to see what might be there.  On the walk to the subway, a very sickly skinny tall man yelped at Irmante as she walked past and scared the heck out of both of us.  It is the first time that Irmante has been yelled at by a man likely carrying AIDS.

We decided to use the rest of the day by going to the top of the Cristo Redentor (Christ the Redeemer) mountain and look at the statue overlooking Rio.  It is one of the seven wonders of the modern world.  It cost us $42 Brazilian Reals each for our entrance fee and three different vans that it took to get us to the top.  It is an impressive statue, and it is incredibly imposing on Rio.  We took some silly photos and I tried to care, but my attention got seriously sidetracked by the most beautiful girl of the whole crowd, sitting on the ledge to get a picture with the statue while wearing a little white skirt and winking at me from between her legs with her little black panties that she was revealing, thereby taking my mind down a sinners road right in front of Jesus.  It is amazing how little black panties can really captivate a man.  Awe Jaysus.   Actually, it was Irmante who initially noticed and pointed out what would be the next 20 minutes of my thoughts.

There were unattractive Argentinian girls praying up there, likely for husbands, who asked me to take a photo of them.  It was hard to not be naughty as I nearly had to lay under them standing there in order to get them and their lord into the same frame.  Maybe the idea of Christianity makes me filthy.  By then I had lost track of the Filipinos that I had become friends with earlier and decided to take under my wing, so Irmante and I began to head down from the statue.  Half way into our descend, we met two Jewish girls who wanted me to take a picture of them.  Haven’t Jew Done Enough?  I assured them it was no problem and as they sat there I zoomed in so that the picture would only be of their breasts.  Click.  They were all smiles as I went to hand them back their camera.  I asked them if they wanted to check the picture first to see if it was alright.  I love watching girls’ roller-coaster of facial expressions when I do that:  as they go from lingering smiles remaining from the picture, to confused faces as they see how shitty of a picture taker I am that I have somehow missed their faces, to bursts of laughter as they realize that I have just taken a picture of only their breasts for them on their cameras.