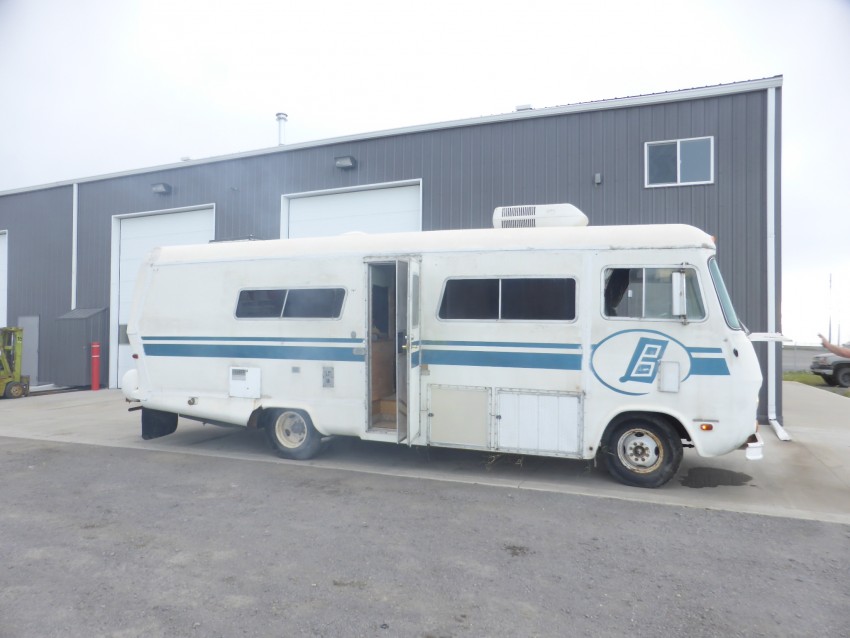 Dan told me that one time he was in Bismark, North Dakota.  He was filling up with gas and realized that he could save $0.04 a gallon if he was part of the armed forces.  So, when he went in to pay, he showed the person behind the counter his ‘Safeway’ club card.  He told them that it was his card because he is part of the armed forces in Canada.  That saved him $0.04 a gallon. Safeway is a supermarket chain in Canada.

Dan went on an excellent gay-pride rant.  He feels cheated in life because he is short, but there are no short-pride parades.  Dan says that this is a 6’1” country, and a 5’8” man struggles in this life here.  Yet, Dan does not feel jaded by society.

Bean and I got an old 1970 Dodge motor-home running and brought it back to the garage.  Bean worked on it through the night evening and we went out for drinks at about midnight.  In a pub called Shannon’s, we sat at the bar.  A very drunk chubby man in his 50’s sat next to us.  He asked us if we were nerds.  Then he kept on referencing to the fact that we were.  It eventually pissed Beaner off who said, “What is going on here?  The two of us are being picked on by a guy alone?”  Beaner told the guy to shut up.  He told him to quit talking.  When he would not shut up, Bean told him that he was going to take the guys glasses and smash them.  The guy said they were $500 glasses.  Bean said he did not care how much they cost.  The guy shut up and when I looked at him two minutes later he had taken off his glasses so that Bean could not get to them just in case he was serious about what he had said.  Potential broken glasses avoided.  Bean and I laughed about that.  The guy asked us what we do for a living.  I told him that we beat up people who make fun of us.  Bean asked him what he does.  He said he has a PhD.  Bean started calling him ‘Dr. Dick.’  Eventually the guy left.  He called Bean a ‘weirdo’ as he left the bar.  I enjoyed the entertainment very much.

“Names I I was in Seoul, South Korea, when Aldrin called me and asked me if I wanted to go and meet some girls with him. Ummm…yeah! We went to meet them at Jung-Ang University, ordered a pitcher of beer and some food. Everyone had one glass of beer and I had about five or six. The three Korean girls are in university, so I told them a lot about partying at university in Canada. The girls are not partiers at all, and one of them told me she was in Canada once and smelled marijuana and it made her uncomfortable. One of them tried to give me heck for not remembering their names, but they have Korean names, so it was hard for me to remember them. Then she did not remember my name. Well then f you... So, I told her mine and failed to ask her hers. Then she gave me shit that I did not even care that I did not remember her name. Well, shoot, I am just going to forget it again anyhow. Names like Yoon Hee, Young Hwa, We Suck, and Me Sock, are not easy for my brain to recall. The girls still found me very entertaining and charming. After one of them went home, Aldrin and I took the other two and played pool with them. Then Aldrin and I came home alone. We blew it. Names II Woke up at 10am this morning because my phone was ringing. The girl told me her name is Hyun Jin. Who? “The girl whose name you could not remember last night…” “Oh…” She called Aldrin this morning to get my phone number. She asked me if I will teach her to party ‘Western Style?’ I guess I could give her some lessons.”
— Names I and Names II
[View All]