April 7
I was up before my friends and I wanted to write my blog in the morning, but by the time I got out of the shower, Tosh and James were away and outside of the tent.  Tosh was smoking.  He told me, “I try to quit every morning!”  This morning seems to have been another failure.

Tosh and James told me they had second thoughts about travelling all over Namibia with me.  Money is a bigger factor than they had initially thought…

So, I needed to figure out how to get to the Skeleton Coast without a car.  I guessed I would have to head to Swakopmund, where there are probably rental cars and plenty of tourists to share with.  I wanted to catch a train there just to ride a train through Africa.  At the train station, they told me that there are no passenger trains.  There are only cargo trains.  I asked how I could get on that.  It did not sound like I could, but I made friends with a man behind the desk, told him I was a journalist and he called his boss.  He brought me a paper after and told me that I would need to put in writing how TransNamib would not be accountable for anything that might happen to me on the train.  That was it!  Awesome. 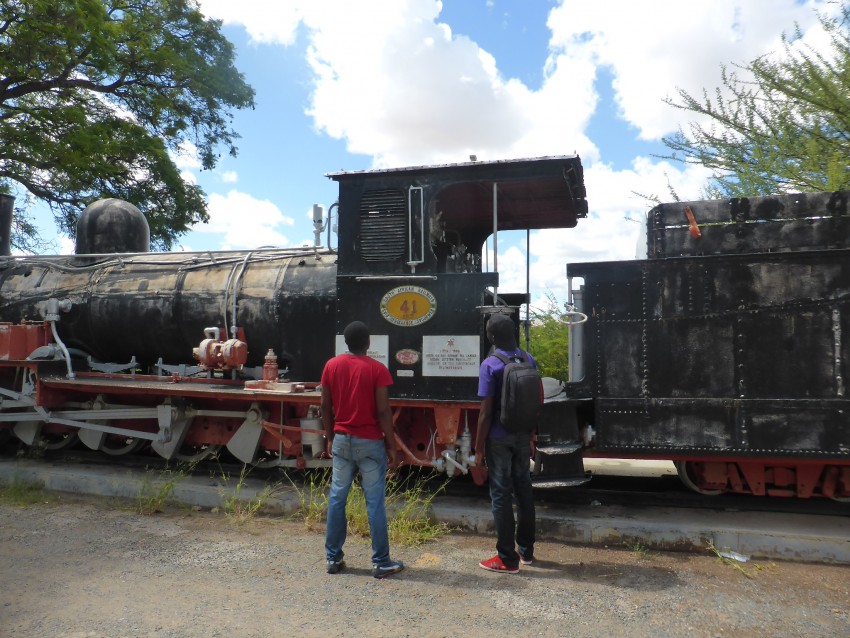 Tosh and James at the Otjiwarongo station.

Tosh, James and I went for lunch.  After lunch, I bought deserts for them.  Strawberry cheesecake.  And a caramel slice.  I knew they had never had anything like that before.  Well, I watched their facial expressions as they had their first bites of cheesecake.  Their eyes lit up as taste-buds exploded.  They were blown away.  It was like watching a child open a Christmas present.

I wrote my letter of “no-liability” for TransNabib and then went to the police station to have it stamped and verified.  The police were useless and helpless to me.  There was a man behind the counter and I was trying to get served by him.  A man can communicate with a man far better than with a woman, just as women can communicate with women better.  The crossover of the two is much less effective when you are trying to get something done that does not exactly follow typical protocol.  However, two police-women called me to the counter as I was waiting to speak with the man.  Had the man served me, the paper would have been signed, but because I was communicating out of my sex, I could not make these women understand that all they had to do was put a simple stamp on a paper.  It is always like that.  Someone from your own sex can sort of understand when you are explaining how you are doing something out of the ordinary.  They are somehow empathetic to your situation.  For some reason, this just never works with someone from the opposite sex.  I can not explain it, but it is always like this.  It is just like getting directions from someone from your own sex versus someone from the opposite sex.  If you are a woman, get directions from a woman.  If you are a man, ask directions from a man.  It is important to be on the same wavelength for certain situations.  It makes a huge difference.

Well, I knew how to get the letter verified without a verification.  I went to the grocery store and I bought six-beer.  I went back to the train station with the letter and the beer, figuring I would not need a verification stamp if I had beer.  I was right.  Beer can really open doors for a person.

Giving a man beer is more effective than giving a man money:
A) it is a thoughtful gesture.
B) you can give a man $10 worth of beer, or you can give him $20 cash, and the $10 worth of beer will feel like it has more value.
C) almost all men like beer.
D) the man receiving the gift knows that you would sooner be drinking the beer yourself than giving them away, so it really reflects the importance of the situation.
E) when someone gives you beer, you naturally cheer inside of yourself at the awesomeness of the gift and you will do all you can to help a person who would give you such a present.
F) beer says ‘thanks’ in a way that no words could ever stress by speaking.

At the counter of the office, I handed a manager of the building the letter I had written freeing TransNamib of any liability on my part.  I then set six beer on the counter.  It made the manager smile.  I told him it was a thank-you for the help.  It was.  I told him he could have the beer himself or he could share them with his staff after work.  He told me that his manager would verify the letter and I would be able to ride the rails with the train from Otjiwarongo to Walvis Bay through Namibia without any issue.  Awesome!  He told me to come back to the office at 17:00 and I would set off with the cargo train driver and assistant at 18:00.  Freaking cool!  Hitchhiking a train!  Yeah! 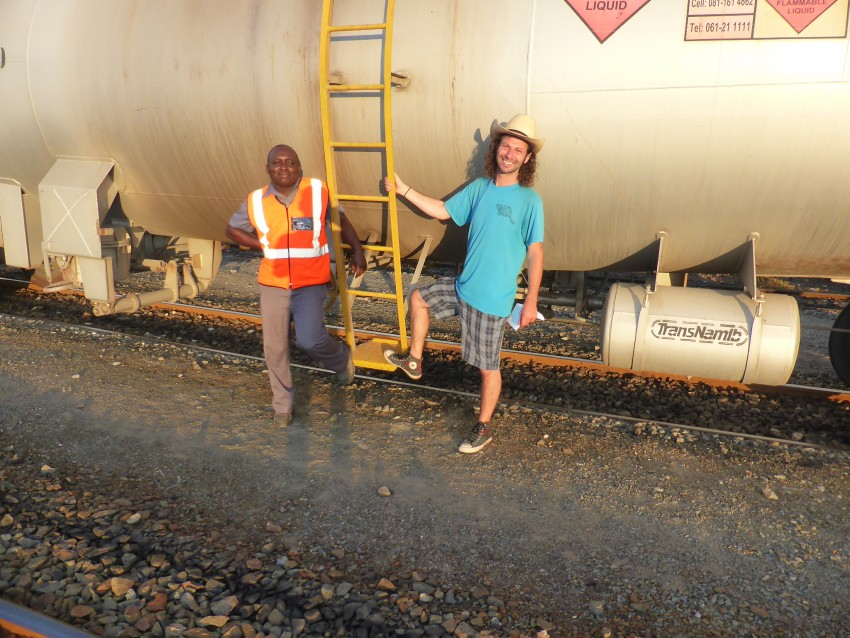 I spent the afternoon with Tosh and James and then raced back to the TransNabib to catch the train and see my friend Gerson, who was the first man at the station and who I had discussed this travel plan.  I got to the station at 17:15, and by 17:30, my locomotive was ready at the platform.  A chair was handed in through the window of the locomotive so that I would have a place to sit.  I would be catching two different trains.  The first train would take me to Kranzberg, where I would catch another there to take me the rest of the way to Walvis Bay. 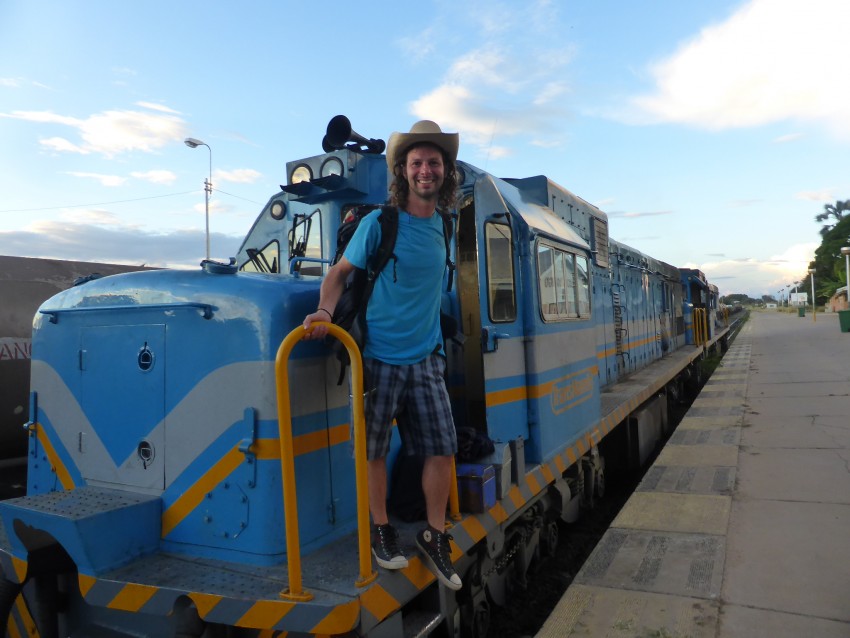 The train driver was Steve and he was happy to have me along for the ride.  So cool.  Riding in the locomotive of a train!  I could not wait to honk the shit out of the horn…at zebras!

Before we could leave town, we had to get our cars lined up.  We had empty wagons behind our locomotive that we would be taking to Krenzberg.  But, we had to get all of our wagons together.  So, we would hook on, and then drive way out of town.  The tracks would be changed behind us and we would back in on another line to collect another row of cars.  After several car collections, we were ready to head out on the line.  Driver’s assistant Simon came to take his rightful chair where I had been sitting with my arm out the window, trying to be cool.  He had a way cooler spot than the office chair in the middle that I would get  for the rest of that ride… 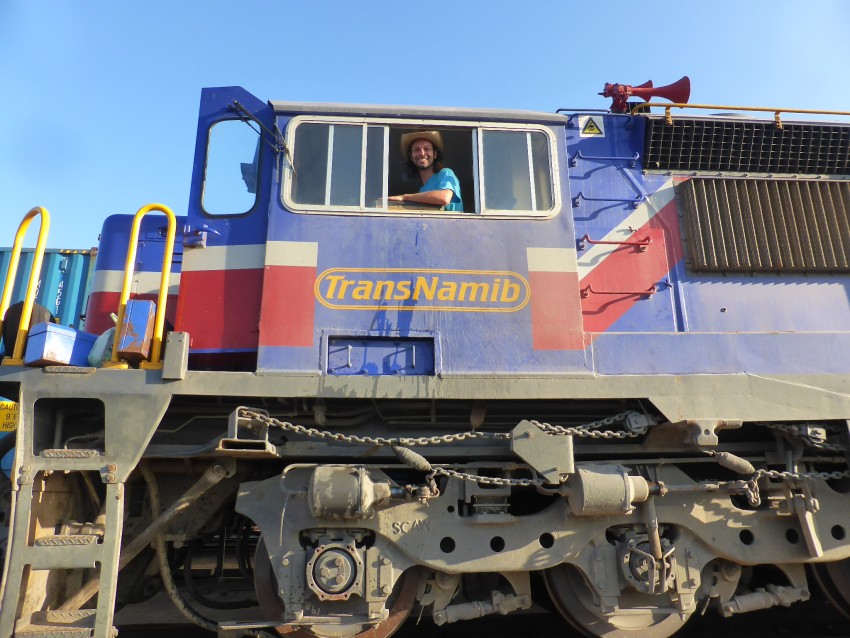 Some Train Things:
– The locomotive we were on was a 33 series – 12 cylinder four-stroke engines.  They are US made trains.  The second set of locomotives was part of the 34 series – 16 cylinder two-stroke engines.
– We were on a ‘Goods Train’ because it was only a cargo train.  We would later meet a ‘Mixed Train’ that had both goods and a passenger car.
– It takes five years of work as a train driver’s assistant before you can become a driver in Namibia.
– A ‘Shunter’ is the guy on the line who puts the cars together that are going out on the line.
– Going from Assistant to Driver is ‘Going to the Other Side’ in locomotive terms.  There is a counter/control panel in the center (‘the mountain’) of the locomotive that separates the two.
– We passed a ‘grease pole’ as we travelled that Simon explained pushes grease out when our weight crosses it to grease our wheels before curves.
– There are kilometer-point signs all along the tracks so that the driver can report his exact location should he have any problems down the line.
– Our axle length was 128, as each of our 32 car train-slack had four axles.  Plus, we were travelling with two engines of six axles each for a total of 140 axles.
– A train ride is a lot of vacuum-line noises that control the brakes of the locomotive and the cars.
– Train drivers dim their lights at other locomotives in the way one would dim their car headlights when approach others in the night.
– When a train pulls forward, the cars are stretched out against the knuckles that keep them connected.  When the train goes to back up, all of those cars push back against each other in a sequence of crashes in systematic order with the entire length of the train starting from the locomotive all of the way to the end of the train.  ‘Bang-bang-bang-bang-bang-bang….’
– I got to honk the horn at Kudu antelope on the drive! 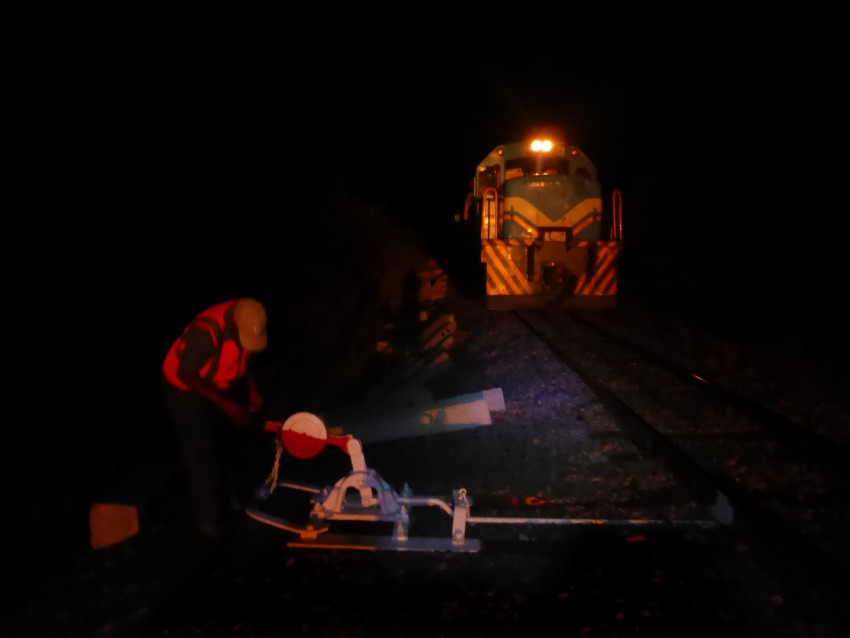 At the switch in the middle of the country. 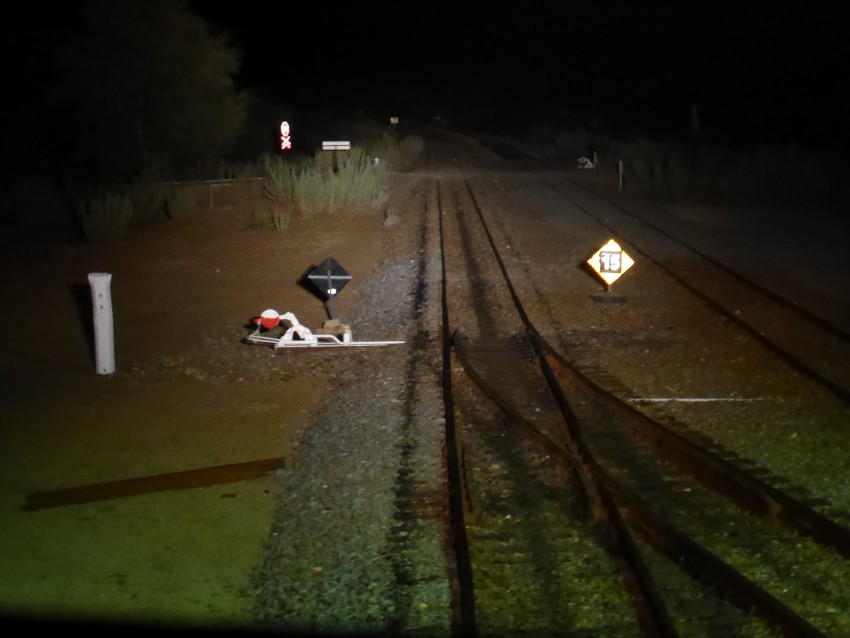 The changeover between the main-line and the loop-line.

It would be a total of 13 hours of train travel for me.  Sometimes the track was so rough that we moved at speeds that I am certain I could have outrun.  However, in many places new rails and ties were laid out for line work and repairs.

I thought that Kranzberg was going to be a busy place since it is the junction nucleus of TransNamib for the entire country, but it was a nice and quiet little village with a shack for the train directors and six relatively quiet lines of tracks.
At midnight in Kranzberg, I swapped locomotives that would take me the other half of the trip to Walvis Bay.  That set of locomotives hooked onto the empty wagons that my first set of locomotives had brought the Kranzberg.  I made two new friends with my new locomotive drivers, but there was no chair for me and I had to sit on a tool-box until my ass was sore.  Then at a crossover, I got on the second locomotive connected behind the first for the trip.  There I was able to have either the driver’s or the assistant’s chair in the empty locomotive.  I stretched out in the chair and when I woke up the sun was rising and I was in the desert!  Whoa!  I was surprised to see the contrast of the land around me during the time I had slept. 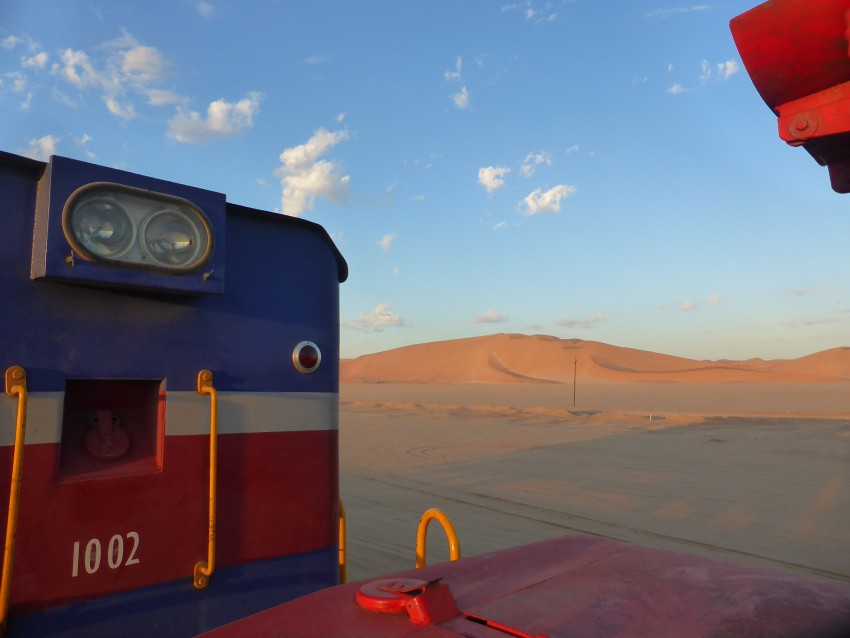 The train pulled in to Walvis Bay at about 07:00.  I got off the train at the station and the assistant from that ride drove me to Loubster’s Bed and Breakfast where I got to a dorm room and slept most of the morning away.  Hitching a train ride is pretty awesome, but the sleeps are inadequate.  What a great experience though.  And I know a little about trains now! 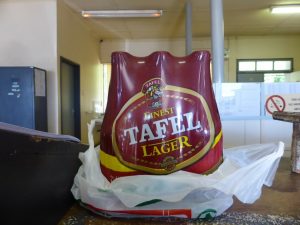 There is power in these! 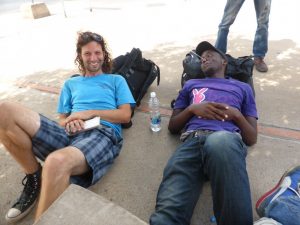 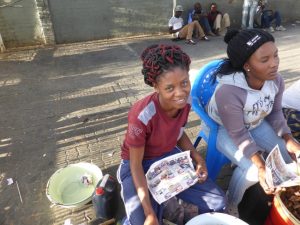 Look at that hair! Imagine the time commitment to make that. 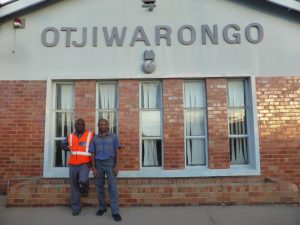 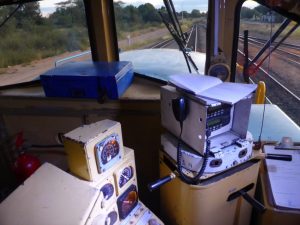 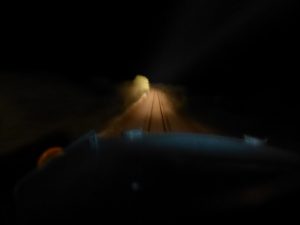 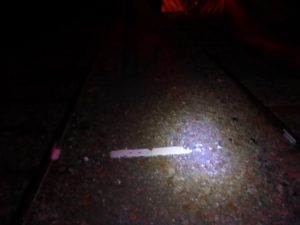 The ‘do not cross’ barrier for the driver to see. This is at a crossover and as long as we remained behind this line, there would be room for another train to pass in front of us onto the loop-line. 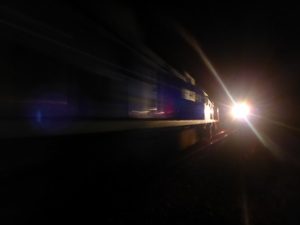 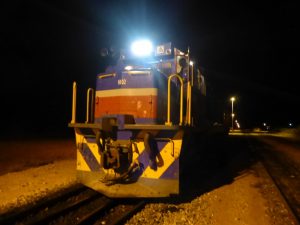 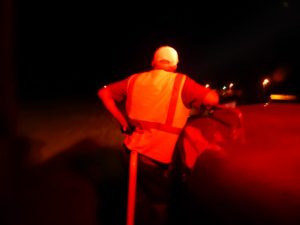 Waiting for a crossover. 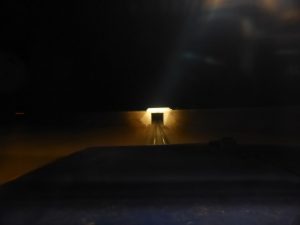 Heading for a bridge. 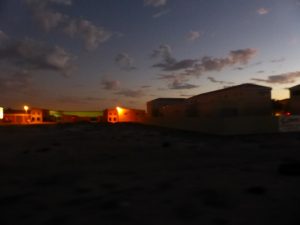 Sunrise about to begin over a Namibian village. 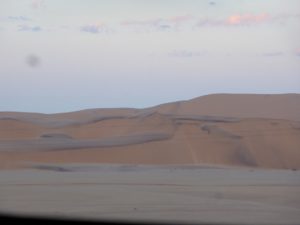 I woke up to this. I love the colors of the lips on the dunes. 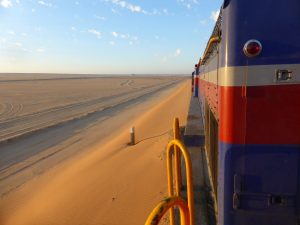 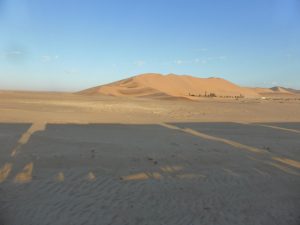 Our shadow on the desert.