Moshi: A Piece of Meat 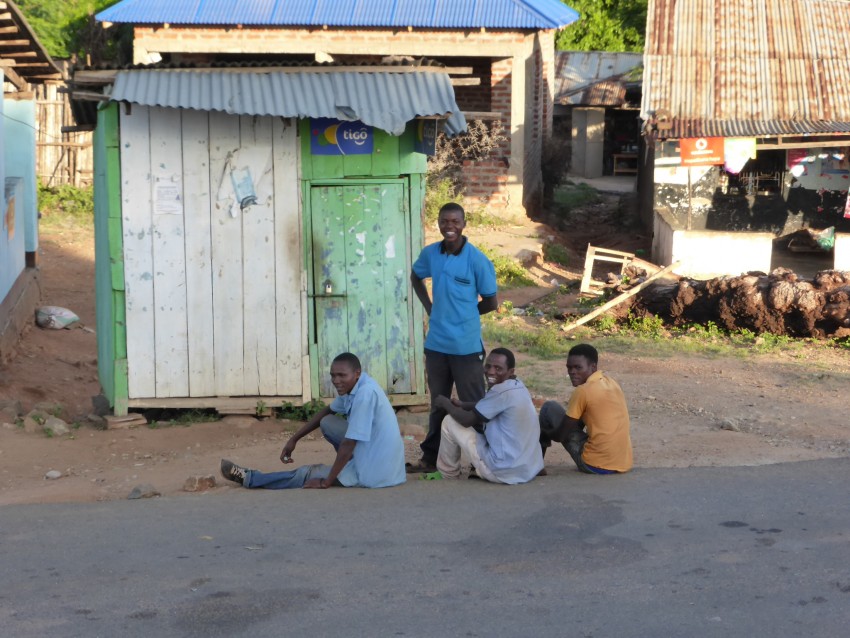 Village locals hanging out. The guy on the right seems to be formulating a curse on me...

Meet Silus:
– Silus is from the Massai tribe.  His village is 30 km away from Moshi, Tanzania.
– There are Maasai people everywhere in Tanzania and many in Kenya.  They all speak the same language, which is amazing because there are 100’s of languages in Tanzania alone with all of the different tribes, and yet this one massive tribe across two countries speaks the same language.
– His father has five wives.  All together Silus is a part of a family with 25 brothers and sisters (15 boys and 10 girls).
– Of the 25 children from the age of 15 to 35, five of them share his birthday.
– He calls all five of the women that his father married, ‘mother.’
– All of the five ‘mother’s’ do the same job for his as his biological mother does.  There are no differences for him.
– His father has 1,200 cows.  It is a lot of cattle, but it has to be so that his father can afford to take care of such a huge family.
– A cow in Tanzania is worth about $500.
– Silus has 30 cows of his own with his father’s herd.
– All of the kids in the family work with their father and cattle except Silus who went to elementary school, and eventually, college.
– Recently, he met a student from Ireland who was in Tanzania doing a research paper on Maasai people.  Silus took him in and showed him everything about his life.  The student was very grateful and when he went to the university he discussed Silus.  The university decided to sponsor Silus for one year of education in Dublin.  He will go in July to spend a year there.
– He has not told his parent about the year scholarship.  He said that his parents have never heard of Ireland and would not understand it if he showed them a map.  When he finally tells them he is going, he said they will just assume he is somewhere in Tanzania, close by.
– The Massai have a culture where the boys are circumcised at 15 years of age.  When Silus was 14, there were 10 brothers that were around the same age and they were all circumcised together in a massive ceremony.  Silus said that they were circumcised with a knife and the pain was unbelievable. 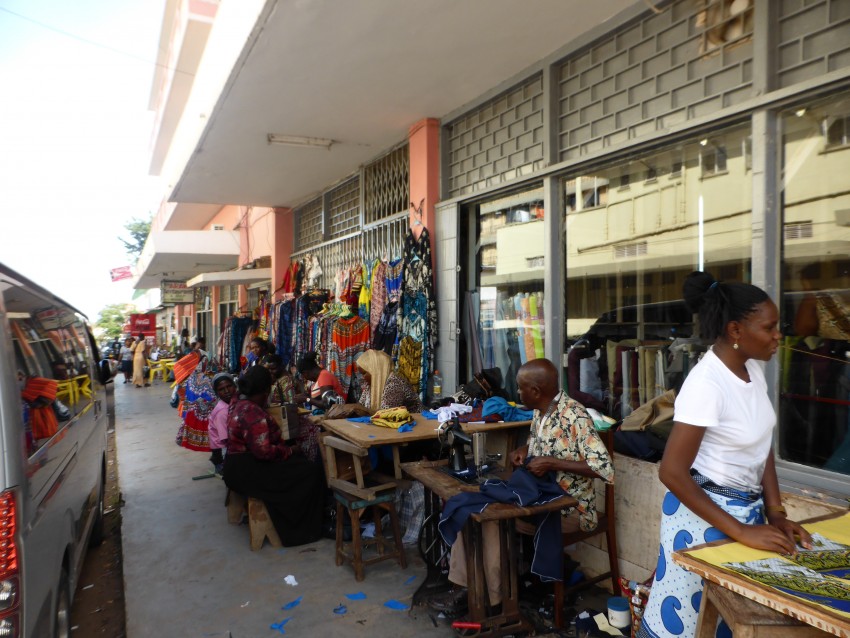 Ladies (mostly) sewing on the shady streets everywhere in town.

I went out at night to meet some foreigners.  I am struggling to make friends with locals as they only see me as money.  Moshi is an especially bad town as a tourist because it is right next to Mt. Kilimanjaro.  There are three types of towns in developing countries:
a) Never have tourists, love to meet new people. Love to show foreigners life. Genuine good hearted people.
b) Have some tourists, but not a lot. As a result the touts in town think you are their only chance for the day so they are relentless. Everyone tries you. You are one of the only pieces of meat in town and every barking dog wants to have a bite. Every person in town knows who you are before you meet them.
c) Is a tourist utopia. Touts are everywhere, but fortunately, there are many other tourists in town to shoulder some of the load as feed for the piranhas.

Moshi is b). On every corner is someone who follows me, trying to find a way to my money. They follow me for half of the block while I pretend that I am Russian and do not speak English until they tire out.  It is my new tactic because I am so tired of saying ‘No thank you’ and they keep on me, trying to find a new angle to my money. Then I get to the next corner and another tout is ready for me. In three blocks, I get a block-and-a-half of touts walking with me, interrogating me.

Maybe it is because I am a single traveller. Maybe it is just the Moshi. It is too much for me though.

I feel like I left paradise of Zanzibar for hell of Tanzania. I had heard people are nicer here on the mainland, but these touts are exhausting in Moshi:….

So, I went to a backpacker hostel to meet some foreigners.  I was sort of needed it.  I met two 23 year old American girls who are part of the Peace-Corps and have been in Tanzania for 11 months to spend time working with agriculture with a tribe in a village. I had a really good chat with them at the bar and then brought them to my hotel where we drank in my bar.  It turned into a 04:00 Czech-sniff-snuff party and we got really drunk.  I had the party room in the hotel and we blared music through the night and security kept on selling us beer.  We were drinking ‘Jebel’ as well which is a coconut alcohol.

But, two girls never works out.  Ever.  The one had the shits and kept on talking about it, the other one seemed indifferent.  So, it became a split decision, and even though all three of us were lying on my bed at one point, the girls went home and I slept by myself.  It was a really good night nonetheless. 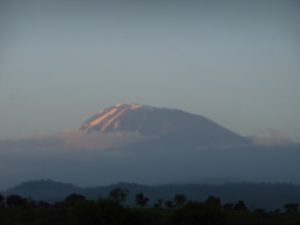 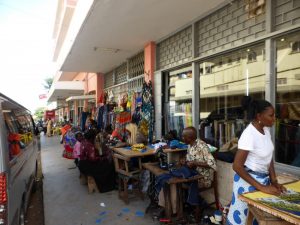 Ladies (mostly) sewing on the shady streets everywhere in town. 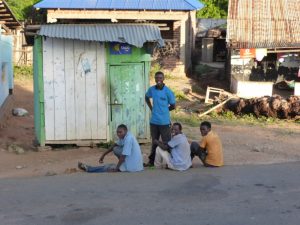 Village locals hanging out. The guy on the right seems to be formulating a curse on me…

“In 1969, 13th Floor Elevators frontman Roky Erickson pleaded not guilty by reason of insanity to avoid a possible 10-year prison sentence for possession of a single marijuana joint and was placed in a hospital for the criminally insane, where he was subjected to forced electro-shock therapy and Thorazine treatments.  Whoa!”
— Education
[View All]