It can really screw you up when your phone loses track of time because it is so dead, and you allow it to set itself according to the mobile network you are using.  Then when you set your alarm for 05:20 to get to the buses early and everyone else is getting up at the same time it is really confusing.  Then you find a clock on the wall and find out that your African mobile network is 2 hours out itself, and it was actually 07:20 when you got up.

I hurried to the bus station to get from Dar Es Salaam to Moshi, not sure how it was going to go down once I got there to the station after my experience yesterday… 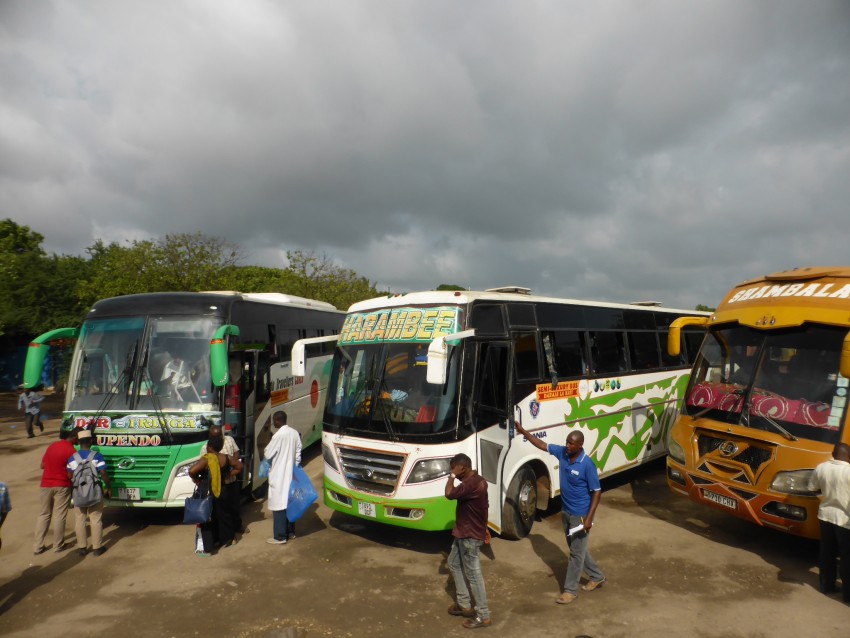 A hustler was all over me.  I was sort of pleased to be able to be an asshole to him when he was all over me.  I realized that it was a bit of a guilty pleasure to be a very stubborn asshole to him for trying to hustle me.  I found a ticket from Dar Es Salaam to Moshi without him, though he was shadowing me, for $16.50 for an eight hour journey.  I got the front seat on the bus, directly behind the driver so that I could see where we were going.

Here are some things:
– As I went to pass through security of the bust bus station, there were two guys on each side of the gate checking tickets sitting down.  If you went to the man on the right he checked your ticket.  If you went to the man on the left, you just passed through because he was asleep in his chair.
– There are a lot of banners for football teams like Manchester United, Chelsea, and Barcelona.  Sometimes there are banners attached to the roof of buses.  Sometimes they are plastic decals across the entire top of the front windshield of buses.  Sometimes buses say things like ‘Chocolate’ or ‘Texas’ across the front window, yet the buses are right-hand-drive Japanese imports. 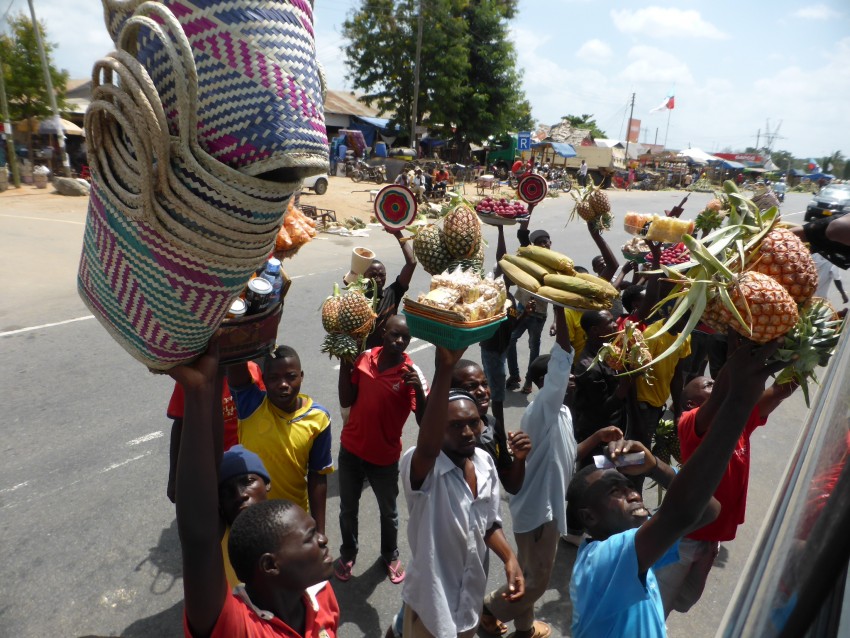 Touts and vendors outside of our bus as we pass through villages.

– The hawkers and vendors of Tanzania make a ‘kiss’ sound at everyone to get their attention.
– There are a lot of ‘Jordan 23’ basketball jerseys and t-shirts everywhere.  I see at least 20 of them every day.
– As the bus left from Dar Es Salaam to Mosh we were driving down the road and there were trucks, buses and semis all over the sides of the road.  Many were getting roadside emergency mechanical work done and there would be pieces of bus laying everywhere – air cleaners, oil containers, tin coverings….
– We had to pass through a weigh scale and they weighed the bus.  The front axle was 6,300 and the back was 9,500.  I would guess that is kilograms…
– A semi was on the side of the road, and underneath of the trailer, in the shade, were about seven guys asleep on a tarp they had spread out.
– Korean dramas played on the television at the front of the bus.  They were subtitled in English, but there was one man’s voice in Swahili, and the volume of the show would cut out as the voice would explain what was going on in the drama about every 15 seconds. 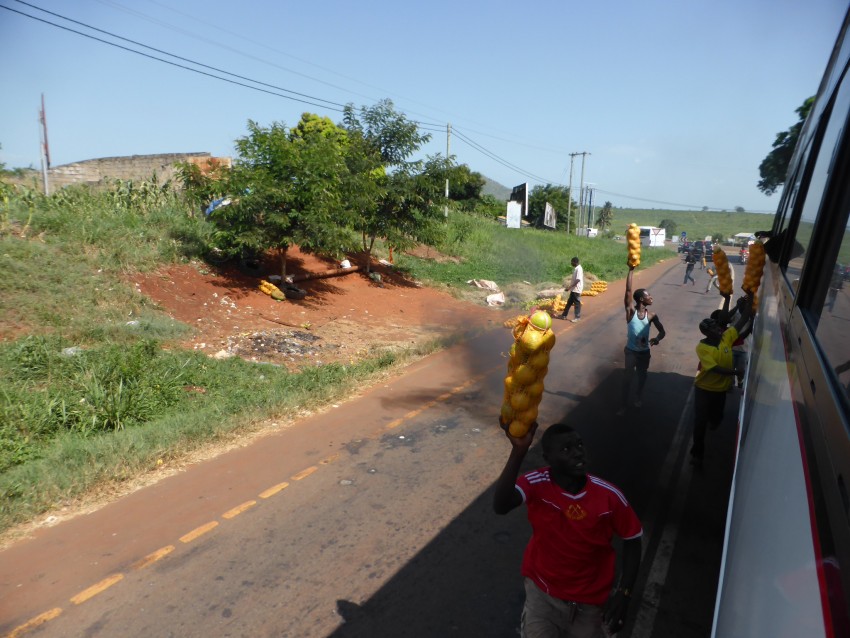 Hawkers, running as fast as they can beside the bus with stacks of grapefruit in the diesel smoke to sell to the passengers as the bus hurries through.

– Three hours north of Dar Es Salaam we began to cross one lane bridges and there were baboons hanging out on the side of the road.
– The bus driver would constantly have his hand out the window to use three or four different hand signals to every single other bus to give warnings.  I tried to ask what they meant, but we did not have enough language overlap.
– On the drive from Dar Es Salaam to Moshi, the bus driver picked up hawkers from the side of the road who would then get on the bus and try to sell their goods to us passengers.  He would drop the hawkers off in the next town. The hawkers would give the driver: water, pineapples, packages of cashews, apples, muffins, etc…  Driving days are obviously ‘grocery’ days for he and his wife. 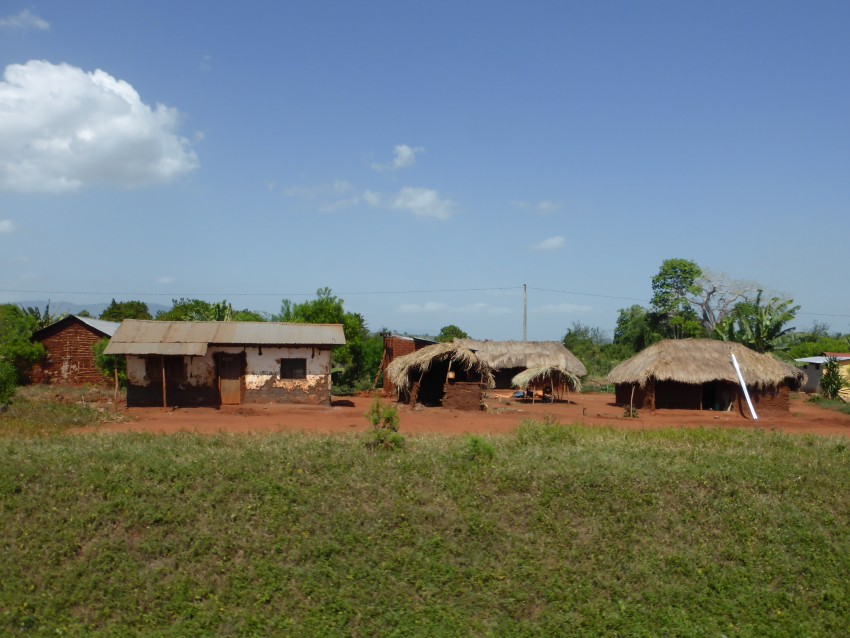 As we arrived from Dar Es Salaam to Moshi, it was getting dark.  My Lonely Plant map was way off as they seemed to have the bus station in the wrong place, which did not work for counting streets to get to a hotel and there are no street signs in Moshi.  So, I got on a motorbike taxi for $0.50.  That was the price he started with, and it seemed like he was not mentally prepared to try to cheat me.  Where am I?

I ended up at a hotel for $10 a night.  I had to bargain from $12.50, and I even got a free breakfast thrown in.  I was smiling a lot and being very charming and I could see that the guy in reception thought I was good entertainment.  When I was filling in the paper-work, beside the usual passport number information was a box that asked ‘Tribe?’ The guy looked at me as I looked up, as if I was supposed to fill in the box.  So, I wrote down ‘Gringo.’  I checked in, found out Lemmy from Motörhead died, felt sad, went out and found a local bar to make friends, met a couple of guys from here who were super nice and hung out with them chatting about Tanzania healthcare for an hour.  The one man who is a researcher for Tanzanian health care told me that the hardest part of his job is finding solutions that work with the budget but then the government does not care and does not do anything. 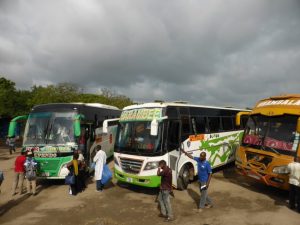 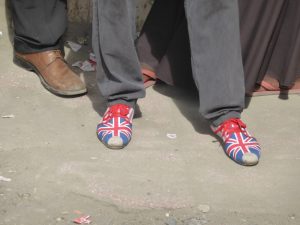 Look at those shoes. I am not sure if I want them or never want to see them again. 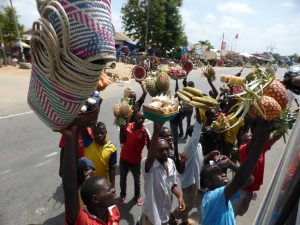 Touts and vendors outside of our bus as we pass through villages. 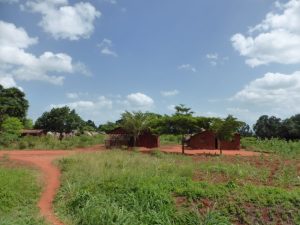 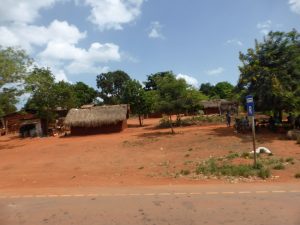 I love the thatched roof houses…like a shaggy dog. 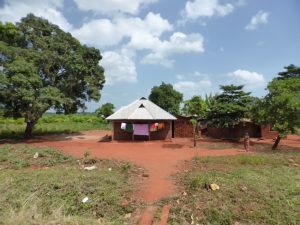 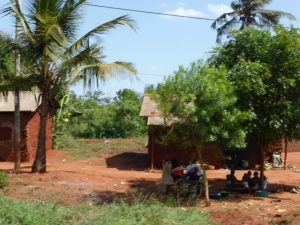 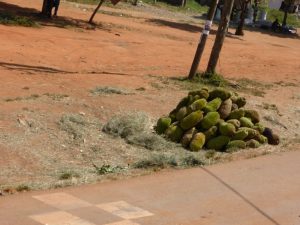 A pile of dragon-fruit on the side of the road. 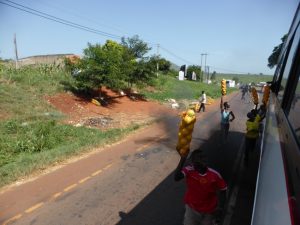 Hawkers, running as fast as they can beside the bus with stacks of grapefruit in the diesel smoke to sell to the passengers as the bus hurries through. 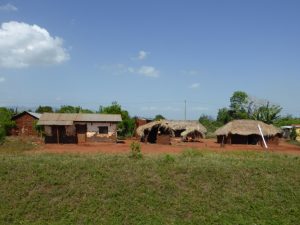 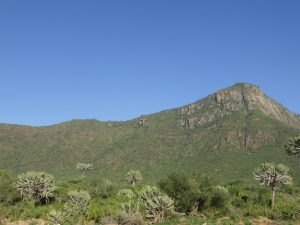 Mountain range and trees that look like they belong in Africa.