We had quite a day. Irmante and I went for a walk past a very smelly dead sea lion on the way to the lighthouse on the end of the peninsula. It cost us $20 Uruguayan ($1 US) to climb it and have a look around. It is the only tourist attraction here. This is a really cool and quaint little town. Any town that has 38 residents that you have to ride through sand dunes to get to is going to be an interesting little place. In 1983, there were 150 people here. It seems strange that a little town like this is drying up rather than prospering through tourism.

At about 16:40, cute Camella showed up again with her new tray of brownies and “brownie contento.”  That means weed brownies if you are wondering.  I decided to have a regular brownie, but Irmante pressured me into having one of the special weed brownies. It was the last thing I wanted to do, but I ate it for her so that she could see how stupid weed brownies make me and how slow they make my brain to process. We went to watch the sunset and I was super high by then. I was walking so slow to get anywhere. Then, I was too dumb to be able to take proper pictures on my camera. Irmante was enjoying this part of me so much. It was a lot of work for me to function though, and I hated it. Irmante kept on calling me her pet.

I took some pictures of the sunset, the beach, some dogs and some buildings. But, I was a wreck though most of it. Then we decided to go out for dinner, but I was not hungry. Irmante decided to order the shark, so I ate half of hers. It was really salty. I am not sure if I liked it or not. I was not hungry because of the brownie so I had to just drive the shark into me. Irmante paid for dinner and told me that she was happy to buy dinner because I was so entertaining. I was just trying to function. It took me a long time to eat.

Eventually we made our way home, and I found a flute to try to learn how to play and made the dog in the house howl along with me as we made music. It was terrible, and the most fun I had all night. My dog friend was an amazing singer. I would have kept it up all night, but people got tired of the howling dog. I was just finding a groovy riff for the dog and I.

I have no idea what time it was, but we went to bed. I have been a total moron for hours from the weed brownies. Pot is a fucking stupid drug. Why do people want to live their lives like a blunt pencil? Escaping to be totally stupid? How dumb is that… 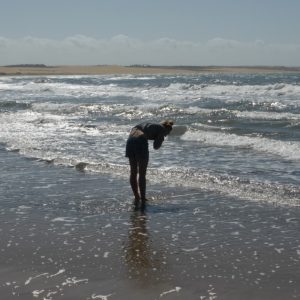 Well, we had a small gathering at our posada in the evening, and we drank a bottle of cachassa in shots. This is how good Irmante felt in the morning. 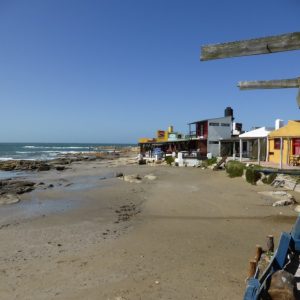 This is where we lived for two days. To the right… 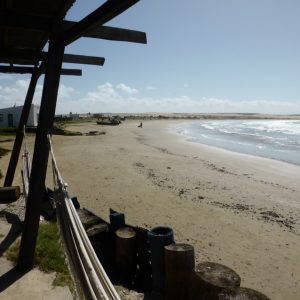 …And to the left. 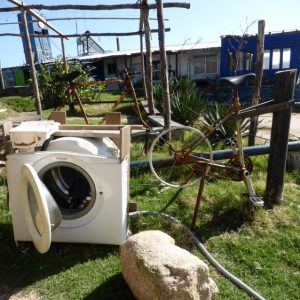 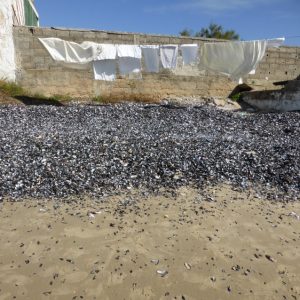 The beach is covered in shells. 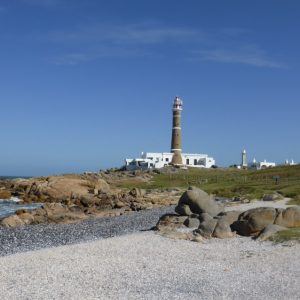 Lighthouse. The only tourist feature… 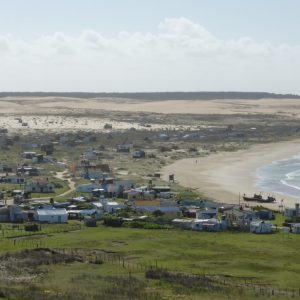 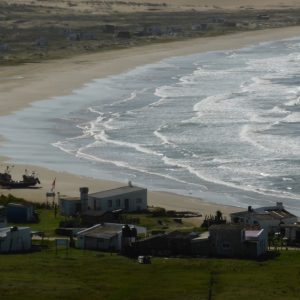 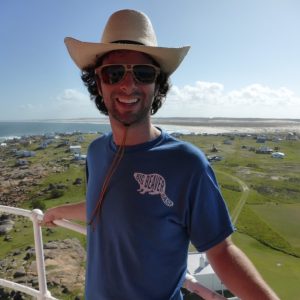 The lady who ran our posada was an old hippie who told me she had lived here in 1983, left in 1991 to raise her child, and came back four years ago. I asked her the difference, and she said that in 1983 there were 150 people living here. Now there are only 38, so she said it is not as fun. I was surprised to hear that a place like this was drying up. 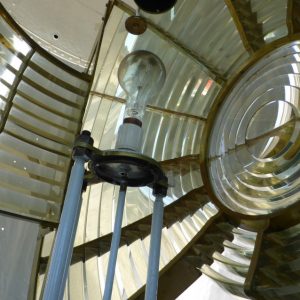 That is all that a lighthouse light is, with a lot of magnified glass. Amazing! 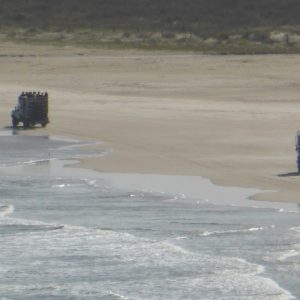 The cattle rack trucks, taking people home. The only way to get in or out is along this beach and then through the sand dunes further up on the right. 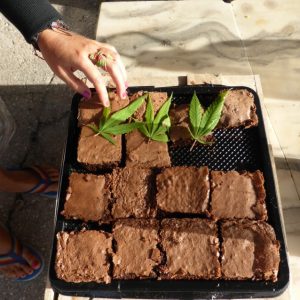 Safe brownies vs unsafe brownies. Marijuana is legal in Uruguay, and a very pretty lady named Camella came around to sell her famous baking. She said she makes her income from it. A safe brownie is $0.65 U.S. while a complete brownie is $3.50 U.S. 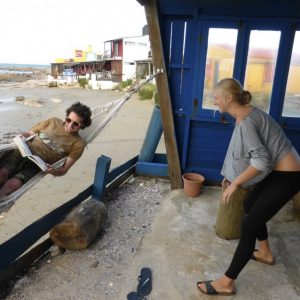 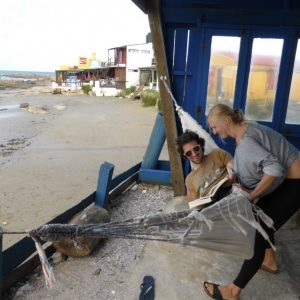 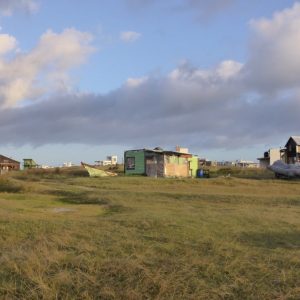 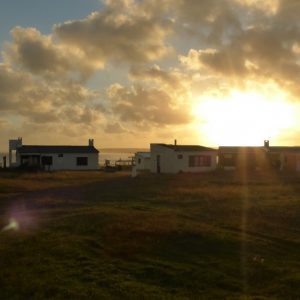 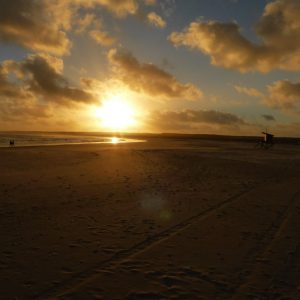 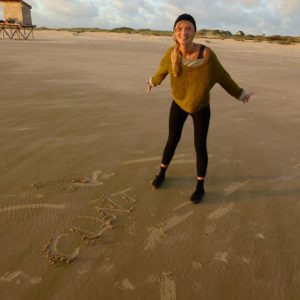 My favorite picture of the past week. 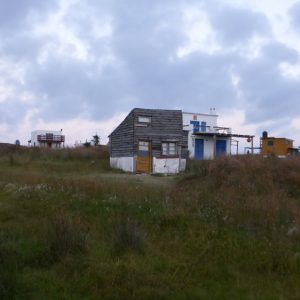 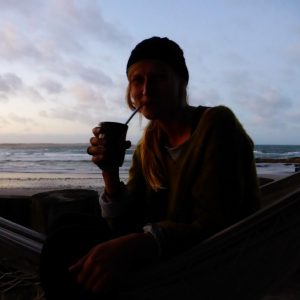 One cup of dickhead. 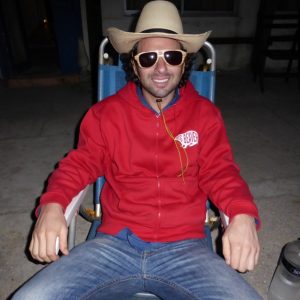 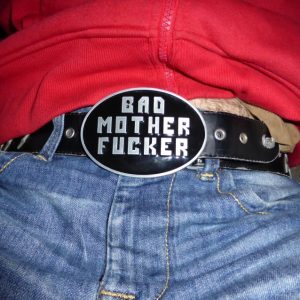 It is a lot for a belt buckle. 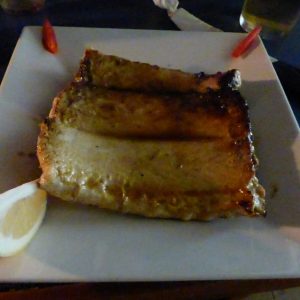 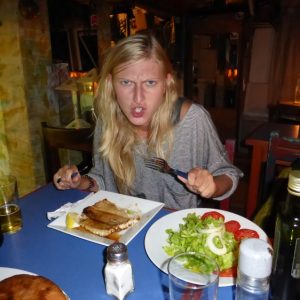 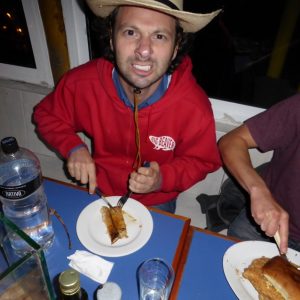 Shark Eater! Shark is very salty. And it tastes evil. 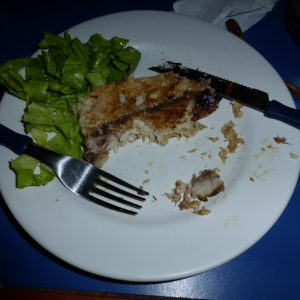 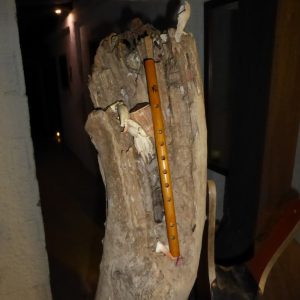 Well, this was hands down the best part of my night. I found this flute in the posada. I played the hell out of this thing, and the huge dog in the posada decided to howl along and sing with me. So, we made music, for a long time. It sounded terrible, but it was a ton of fun. The dog and I seemed to enjoy it more than anyone else within ear range.

“Ron was in his 70's and he was with his wife and her friend. The ladies later went to the bar across the street and Ron said to me, “I’ve got to hang around with those two crazy women. But if I found one more crazy woman, I bet I’d be in trouble...” Ron was my favorite person I met in the city.”
— Ron in his 70's from Minot
[View All]