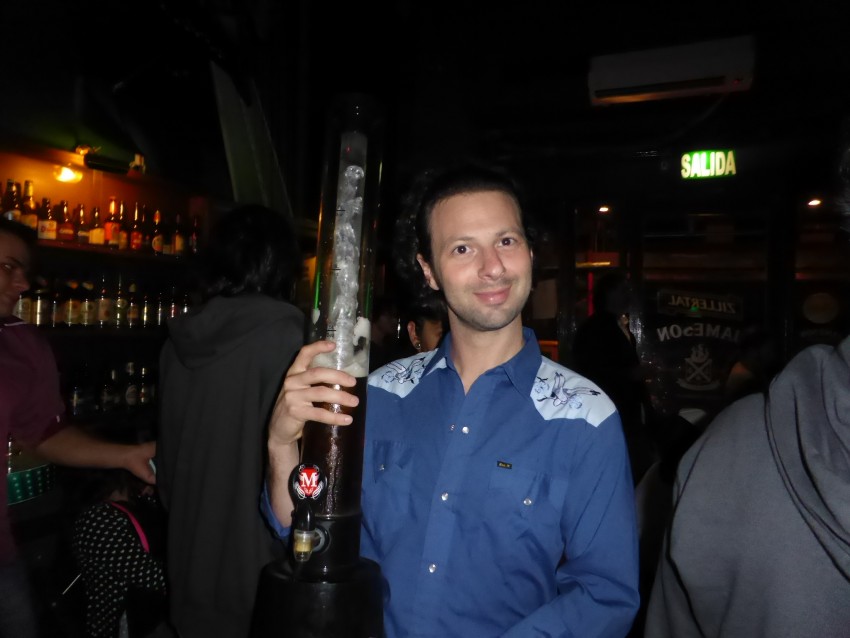 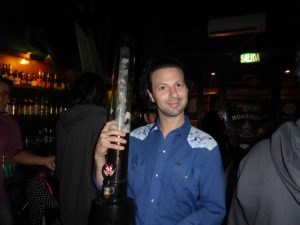 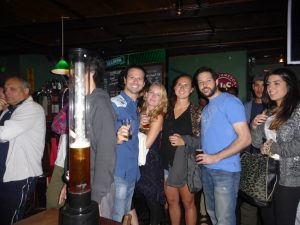 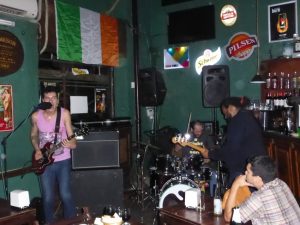 Lazy, and out of bed at 12:30pm.  I was tired.  Irmante was sick as a sick dog because she did not starve herself from food and water to choke the sunofagun of a cold off.  So, I went on a health shopping spree for her and tried to sort her future out.  I drew a mustache on her with a marker.  It was a rainy shitty day.

I made buddies with the guy who runs the Caballo Loco Hostel.  Felipe is super cool.  We made plans to drink beer in the evening.  Sweet, Montevideo party time on the way!  In the meantime a couple of girls overheard Irmante and I reference the day I tried ayahuasca, and they found me interesting.  And that was nice because I found the blond to be attractive.  And then as the afternoon turned into the evening, I could feel the blond stealing looks at me.  And then Irmante told me, “Hey, the blond keeps on checking you out.”  I told Irmante I could feel it.

So, I invited the girls out with us for Montevideo party time.  They were keen.  So, Felipe from Uruguay, who runs the hostel and I took two English girls and a Swedish guy with us.  We were walking to a rock bar and as we passed by, the Swede entered the bar and then came back out again and wanted to keep us on our way.  A squealing guitar solo for Comfortably Numb was wafting out from the glass doors of the bar.  I asked my moving group, “Why are we not going in here?”  The Swede said that it was too loud for him.  Everyone stopped moving.  I suggested we go in for ‘one beer’ knowing that would turn into all night.  And we headed in.  And we drank towers of beer.  It was my first time partying in about two weeks and I just wanted to go nuts.

The Swede had a beer with us and decided to go home.  I told my crew, “You know, in eight years of travel, I have met a lot of Swedish people, and they are always really nice people.  But they always seem to be boring.”  It is true.  In eight years of travel, I have never ever thought after partying with some guy from Sweden, ‘That dude was a ton of fun.  I hope I get to drink beer with him again.’  That never happens.  I am not sure why.  Surely it is fun in Stockholm?

Anyhow, all I wanted to do was have some Montevideo party time.  And I was probably too much for the nice little 20-something English girl on her first trip away from home.  The music was awesome and I just wanted to rock out to the band playing Floyd, Zeppelin, Beatles, Muddy Waters, Ozzy, etc with so much emotion.  I could feel that I was the night for the other three in my crew.  And I had a blast, but I did not make out with my blond.  Maybe if the night had went longer and I could have put my full attention back on her.  But, she had a 7am bus to catch in the morning.  I did not want to end up with a futile effort so I was just a nutcase instead.  When we came back to the hostel, I kissed her on the cheek when she said she was going to bed, and I did the same myself.

“'Omerta' by the band Lamb Of God ‘Whoever appeals to the law against his fellow man is either a fool or a coward Whoever cannot take care of himself without that law is both For a wounded man will shall say to his assailant "If I live, I will kill you. If I die, you are forgiven" Such is the rule of honor’ Wow!”
— Lamb of God
[View All]