At 21:00 I went to meet Sara at a metal bar in Mexico City called Metal Brothers.  The website said there was no cover charge and stated that live bands play every night.  I was worried that it was going to be some lame ‘Cruise Ship’ band covering a version of ‘Hotel California’ for the eight-kajillianth time and fill me with regret.

None of that at all…

Metal Brothers was a Mexican version of my darling Camden Monarch in London.  The Monarch lives in another entity in Mexico City!

It felt like a home in another world.  I put a Beaver sticker in the bathroom just to familiarize myself a little more.  The bathroom was filthy.  I knew from that assessment alone that I was in a great music environment.  Years of travel have taught me about the levels of metal ineptitude that come with a tidy bathroom. 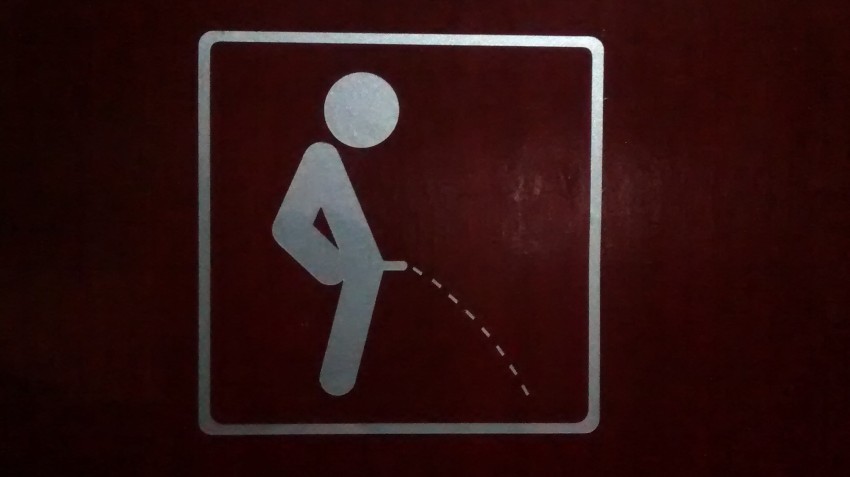 Metal Brothers was seated, which absorbed some of the cool.  But, big beer were being delivered to our table all night while we rocked out so it was a bit of a trade-off.  It does really effect the game when people are seated at a metal show though, and Mexicans are far too polite to rush the stage and get in the way of others watching.  So, while standing at the side of your table you throw the hell out of your hair and cheers others around you doing the same.

The band really wailed.  It was an amazing drummer who seemed to actually be an animal, a bass player in his thirties, two twenty-something guitar players, and a rocking middle-aged lead singer who belted out metal all night to the crowd.  It was incredible to be in Metal Brothers henceforth re-dubbed as The Mexican Monarch. 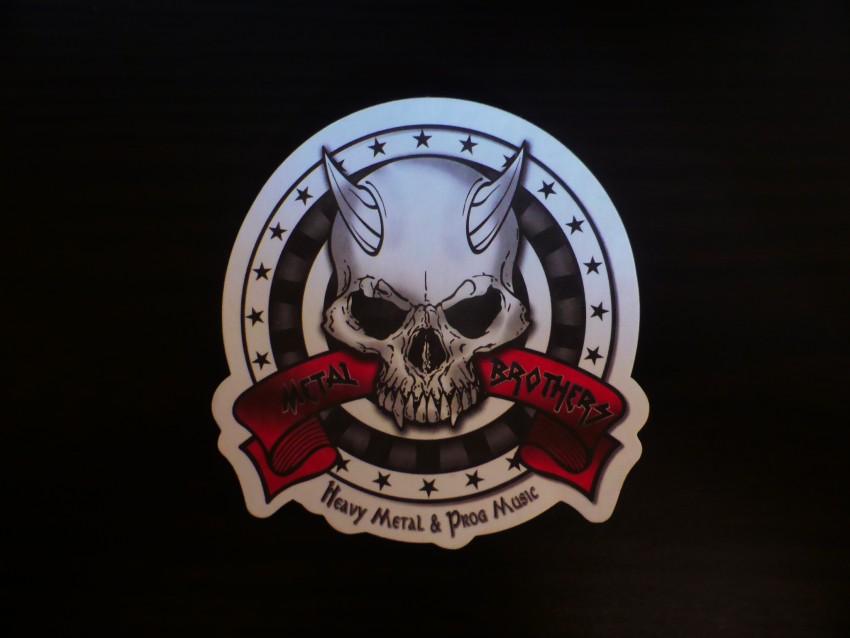 It was loud in Metal Brothers, but not Monarch loud.  I am not sure if there is any other bar in the world that is  Camden Monarch-loud.  The weekly special Sunday to Wednesday of ringing ears is a unique part of the Camden Monarch experience that I feel helps to remind you three days later how much fun you had that night…typical lingering Wednesday “What?”s when someone asks you a questions is part of a specific lifestyle in London.

Metal Brothers did not have that identical volume feature, but they certainly cranked it out.  The band that played on the Friday night is the same group of guys who play every Friday in Metal Brothers.  As well, other metal audience members came to the stage to sing in this Mexican paradox.  A huge difference I noticed right away was that I was there with a Mexican señorita.  That would never happen in London as Mexican señoritas are in short supply in that city.  Mexico City has fantastic benefits!  I broke loose a little more than anyone else in the bar during the show and I was not sure if the lovely Señorita Sara was going to be embarrassed or proud of me.  I later noticed a healthy glow on her face, so it seemed like I was coming out ahead…

Here is the last bit of the ordered set-list that I wrote down as I was standing by our table rocking out, trying to not knock the giant bottle of beer from the top of it that I was using to wet my screaming voice:
-The Four Horsemen
-Symphony of Destruction
-Number of the Beast
-Mr. Crowley
-Highway Star
-Thunderstruck
-Another Thing Comin
-Ace of Spades
-Heaven and Hell
-Cemetery Gates
-Master of Puppets
-Hallowed Be Thy Name

It was essentially a Metalworks set-list in the Mexican Monarch… 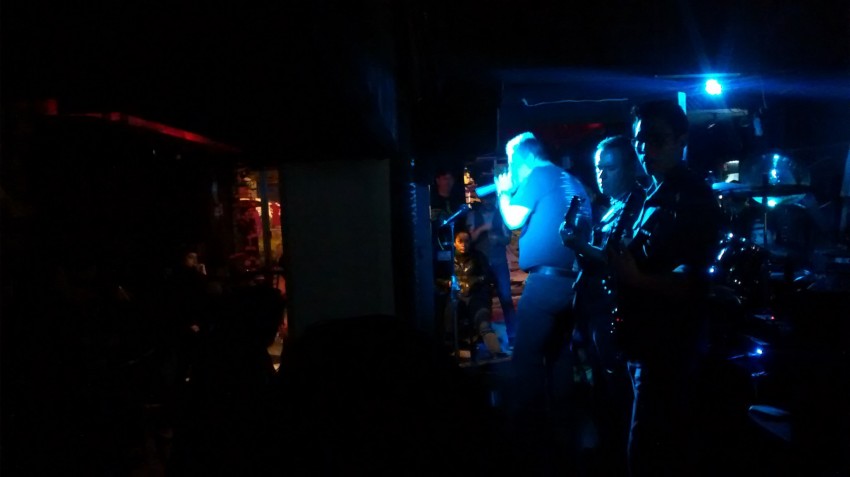 Alphonso, impersonating Steff from the stage.

Mexican rules are more gentle and the Mexican Monarch got about three hours to shake the rust off of you and blast the metal in…  Their stage-time is something I am very jealous of and wish we could also enjoy such leniency in London.

There was a 23 year old Mexican Matt with a neck tattoo who ripped solos with a knock-off Les Paul, a Mexican Steff running the show as the lead singer who could really drive it home, a Mexican Gus on bass who was great and would be envious of real Gus’s hair if he ever met him, and a Mexican Pete hitting the drums with a great force.  There was no Mexican Sally capturing moments of the night, and someone clearly needs to assume that role in the Mexican Monarch of Metal Brothers.  I should have brought this over-site to someone’s attention as they are missing a major part of the entire event! 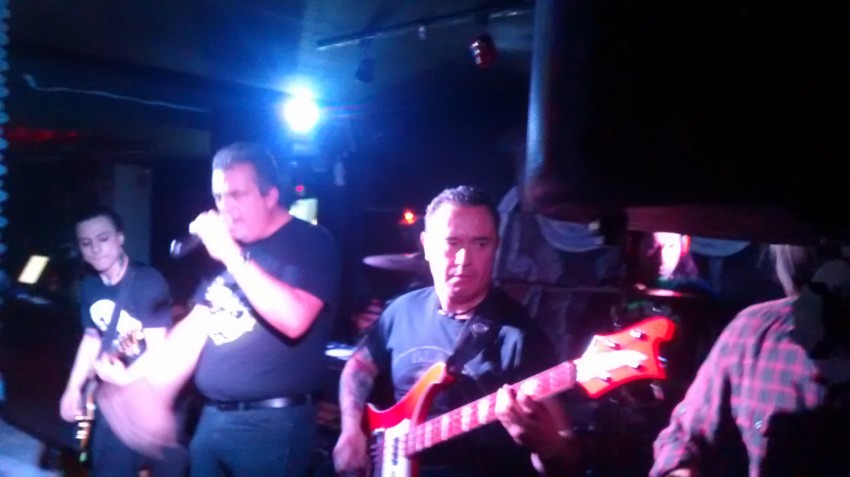 The Metal Brothers Friday night line-up. Matto on the far left, Steffo in the middle and Guso on the right.

I had a good chat with the guys in the band after the show and told them what their real names are in the Camden Monarch of London.  I told them how much I appreciate the awesomeness of what they do.  It was a pleasure to meet those guys and it is nice how metal overlaps and can really bring people together. 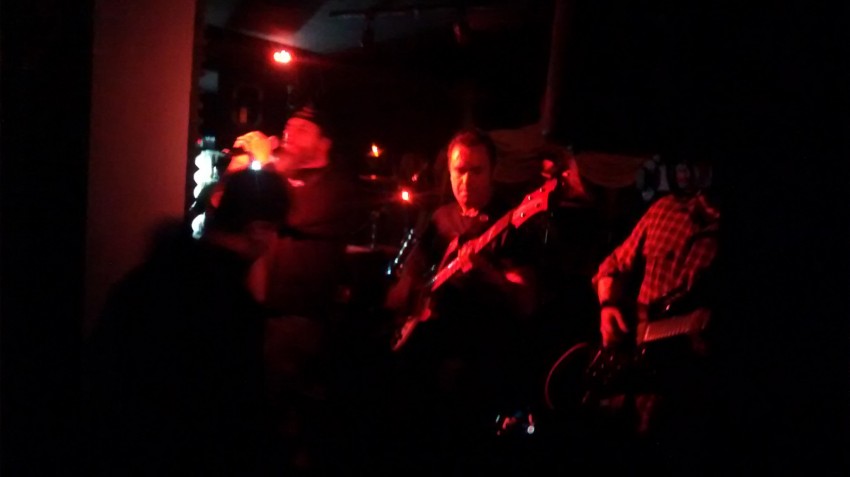 Guest metal singers from the crowd.

It is not even necessary to have a common language to make friends to rock out with at a metal show.  You just have to shake your hair, cheers others, high five them, and say things like, “Fuck yeah!” “Motörhead!” “Awesome!” and “Holy shit that was great!!”  Those guys were pumped to know about your existence in London and they thanked me profusely just for coming.  I thanked them for rocking my balls off and left with six new Facebook friends who want to share the musical world.

I miss you London folk and I miss seeing your faces on Sundays.  I should be back for a bit this summer.  I hope it has been nothing but Sunday Fundays for you over the past six months.

Stay awesome my friends.  Much metal love to you all.
Stay tuned.
Beaver!

(*p.s.  Sorry the photos are somewhere between terrible and horrible.  I only carried my phone with me to the show and was decent-camera-impaired…) 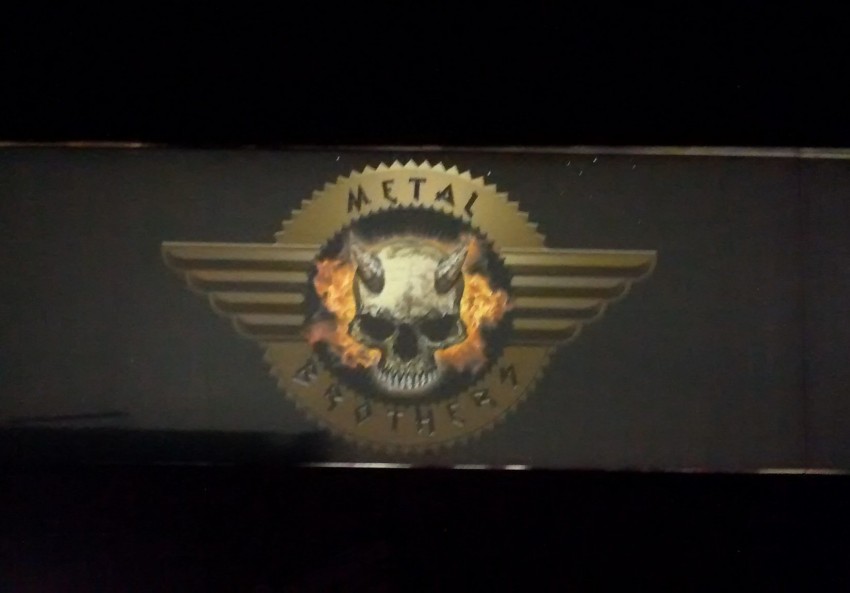 “I should have winded him...and kneed him!”
— My friend Tom on someone who disappointed him (Northern England accent)
[View All]