Ironically, as I was trying to think of a way to scheme a way out of work for the night my boss sent me a text that said we would be taking this nightshift off.  Unreal luck!  I have had this date on my radar for a couple of months. 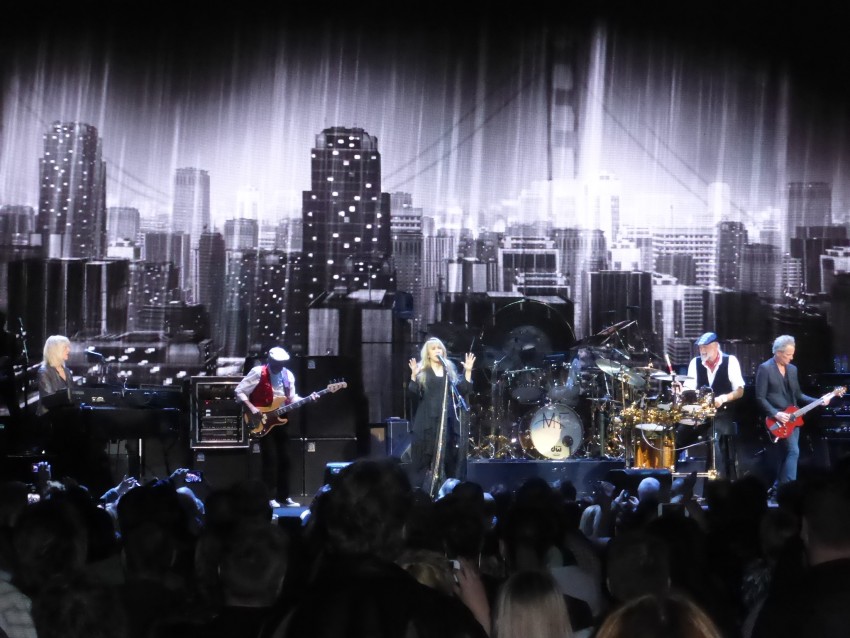 Fleetwood Mac was in town…  So, I scrounged up a floor ticket on stubhub, twenty rows from the stage, for $174.  The price of the ticket was $184 when I started looking at it, and by the time I got the ‘no work tonight’ text it had dropped to $174 by someone afraid of losing their entire $221 investment.  Their loss was my excellent gain.  Pay.  Print.  Line up a vehicle.  Change clothes.  I’m gone.

Well, Fleetwood Mac is a band I have wanted to see for a very long time.  I nearly flew to New Orleans before I was ready to go there last year just to catch them at the Voodoo Festival.  Reason stepped in and I hoped another chance would arise.  The jackpot rolled in today as I managed to have the night off on this new tour where Christine McVie has rejoined the band after a sixteen year absence to complete their entire late 1970’s line-up. 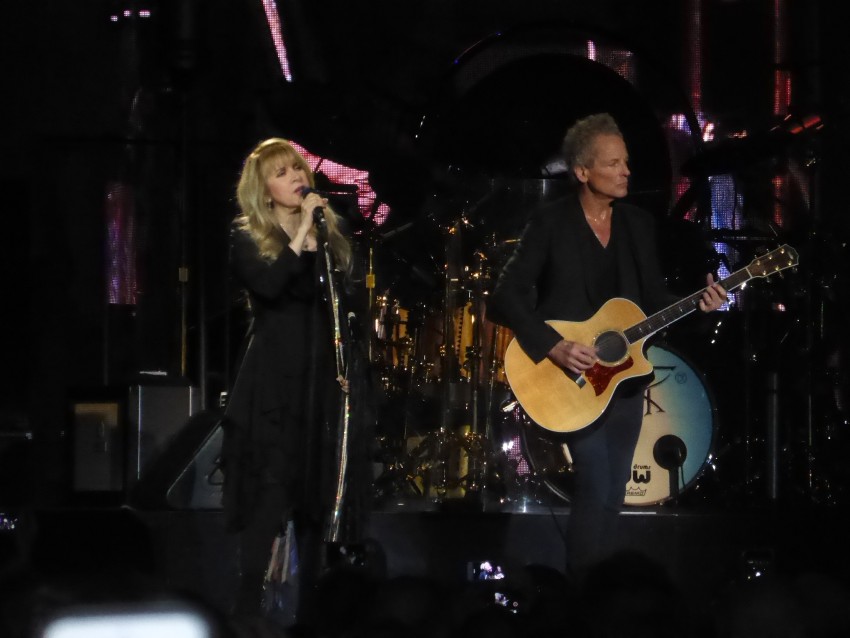 Now, even though I have no experience with this band without Christine McVie, yet somehow it felt very special for me to see this band with her involved at this time.  Maybe I am just caught up in the excitement of her being back.  It felt like a great moment was taking place before me and I found it really nice to see her for some reason.

Lindsay Buckingham can play guitar.  Wowzers.  That man makes magic happen with his hands and only his fingers to pick.  Nothing looks more badass as a guitar player than to finger-play.  One time a friend at Hard Rock Amsterdam and I were watching a Led Zeppelin video where Jimmy Page was playing that double necked Les Paul guitar on ‘Stairway to Heaven’.  My friend asked me if there was any way anything could ever be cooler.  I said, “Yea, if he was left handed.”  That nearly floored my buddy and he grinned at me every time we crossed paths for the next thirty minutes.  I would now like to alter that same answer to, “Yea, if he was left handed and he played it with his fingers.”  That is the ultimate coolness peak of my pyramid of rock and roll self-actualization. 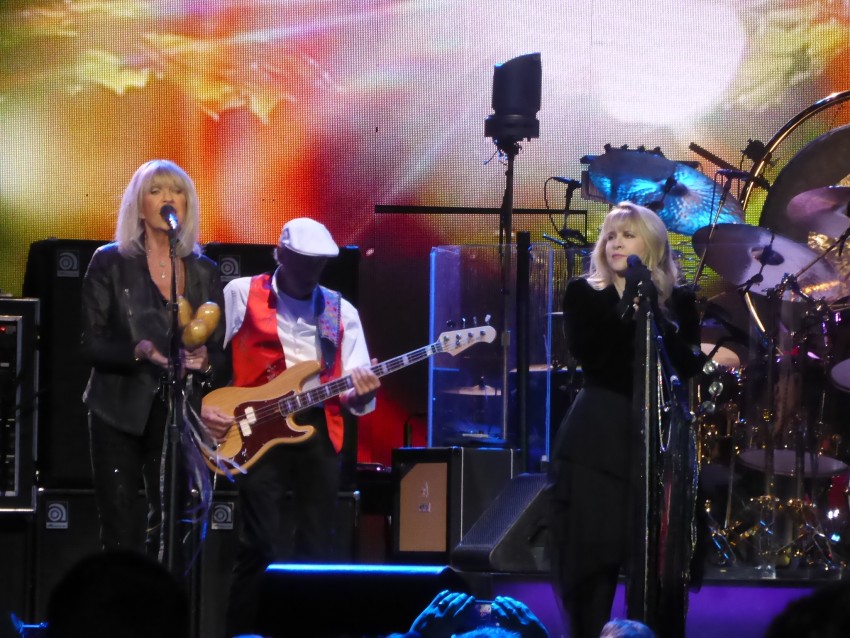 I would realize how much Christine McVie’s voice would make me glow through the entire concert.  Early in the show, McVie addressed the crowd and told everyone how grateful she was to be on the stage with the band again.  Following the next song, Stevie Nicks addressed how grateful she was to have Christine back in the fold again.  After the flowing song, Lindsey Buckingham addressed to the crowd about how fortunate he felt to have Christine back.  There was so much homage to her all night and it was really nice to see how everyone felt about their band with her re-involvement.  When they band played ‘Tusk’, McVie came out with an accordion.  There was something really cool about that and the lady must be quite a musician.  She sang ‘Say Your Love Me’ two songs later; my favourite FM song.  It was awesome.  I am just glad that ‘never’ does not always mean never when people say things like, “I will never go back on the road with Fleetwood Mac again.”  I once said, “I will never spend another winter in Canada,” and just look at me now.  Here I am, miserable.

As Stevie went to introduce the song ‘Seven Wonders’, she began by saying, “This song was written…” and was interrupted by a guy in the crowd behind me who yelled, “…on cocaine.”  It was funny.  The album Rumours was a notorious cocaine album that was the best selling album in the world until Michael Jackson’s ‘Thriller’ came along.*  There are crazy stories about Nicks doing so much coke in the 1970’s that the septum in her nose collapsed and she was no longer able to do snort her regular dose.  So, she used to have a roadie that would blow coke up her ass through a straw in order to get her fix.  Now, that is an incredible dedication to a drug.  Nicks was so gorgeous in those days that said roadie was probably pretty happy with his job and his luck of her collapsed septum.

There was a lot of band reflection in the monologues between songs.  All of the members of Fleetwood Mac seemed to be so happy with where they presently are and spoke of both the highs and lows that got them to through to today.  It was really nice to see a band that is so grounded. 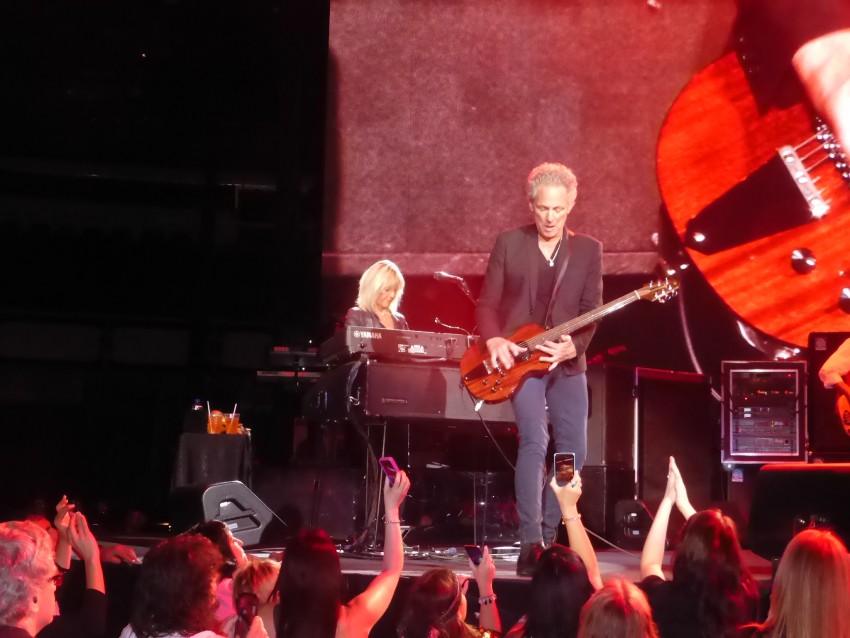 Lindsey Buckingham played ‘Big Love’.  That song is just incredible.  The way that man plays the bass notes on the guitar with his thumb as he picks the rest of the song that he plays with the rest of his fingers….   It is an incredible amount of guitar for one guitar.  Try this if you want to be impressed – https://www.youtube.com/watch?v=bVsxvoUX9Rw.  Even the guy standing beside me, who I thought was a moron by all of it idiotic comments, was intelligent enough to be blown away by the guitar prowess of Buckingham that he raved about Buckingham’s work to his unattractive girlfriend after the song finished.  I then stopped being so annoyed every time he bumped into me for the rest of the show as he had earned my appreciation.  How could I not like him after that?  She is probably the best he can do.

For ‘Landslide’, Stevie said, “I do not know anyone here in Edmonton, so I dedicate the next song to the universal consciousness of Edmonton.”  It was nice of her and it fit well into the wacky mould I had always assumed her to be of.  Stevie Nicks is probably a pretty interesting person to have a conversation with about the existence of metaphysics and its role in the hierarchy of humanity.  I was staring at Nicks as she was singing the lyrics, “I’m getting older too,” and it made me realize how old the band really is today.  I watched Stevie Nicks perform for Hard Rock Calling in 2011 and I could see a difference in the plastic surgery of her age today.  But, that means I am getting older too.   There are lines in my face that were not there in 2011 either.  Where is this fountain of youth I keep hearing references about?  I hope I am wrong in assuming that if Stevie Nicks has not found it with her millions, I am likely doomed for wrinkles and sags.  It is a shame really.  I enjoy being older than 29 but people believing I am.  How much longer can that last without this undiscovered fountain?  Time is ticking.  All of my friends are having babies.  I still just like the act of practicing how to make one someday… 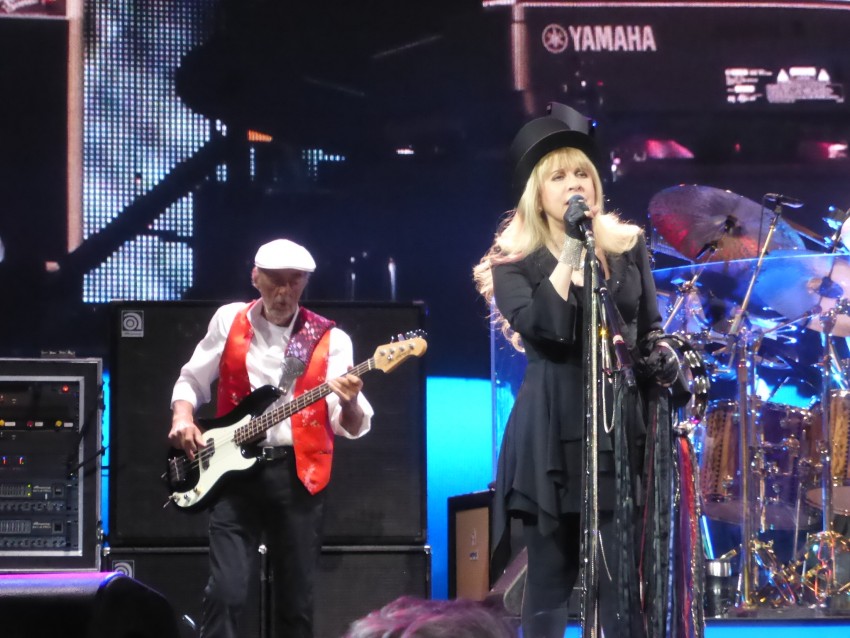 My friend who is a Fleetwood Mac fanatic told me that when she seen the band last year there was hokey marketing where Stevie Nicks and Lindsey Buckingham made little sideways glances at each other and then held hands.  It is as if they were staging a dramatic moment in each concert to lead every crowd to believe that they were witnessing a beautiful moment in life where Stevie and Lindsey become one again after 35 years of hopeless romance from others.  It happened a little at this show as well but it was not the awful drama I was expecting and had premonitionally feared.  I have wondered if was perhaps due to their gender confusing first names that they were originally drawn to each other.

Stevie made a really good monologue before ‘Gypsy’ and explained how the song was about her trying to make it in rock and roll and showing up at the Velvet Underground store where clothing for musicians were sold.  However, once she arrived she could afford nothing but ribbon they sold.  She told stories about starting out in music and being on the same show-bill as Janis Joplin and Jimi Hendrix, and even though they were eight slots away from the headliners, at least she could stand on the side of the stage and watch them.  She said that was very inspirational to her and she encouraged everyone to continue chasing their own dreams and to not let anyone else get in their way or have any say because passion will carry you.  I hope you are right Stevie.  I am banking on that very inspiration myself.

I guess things change in life and emotions relax themselves as years pass.  The band preformed ‘Silver Springs’ which has some of the strongest lyrics I know of in music – “Time cast a spell on you but you won’t forget me.  I know I could have loved you but you would not let me.” Those are some pretty heavy thoughts and that is a powerful thing to say to anyone.  I remember those words feeling very personal at one point years ago.  I guess everyone has probably felt those exact lyrics at one point in their adult lives.  It is now just a really great song now and the personal-ness of the lyrics have left me.  Time dulls everything in life; for good or for bad. 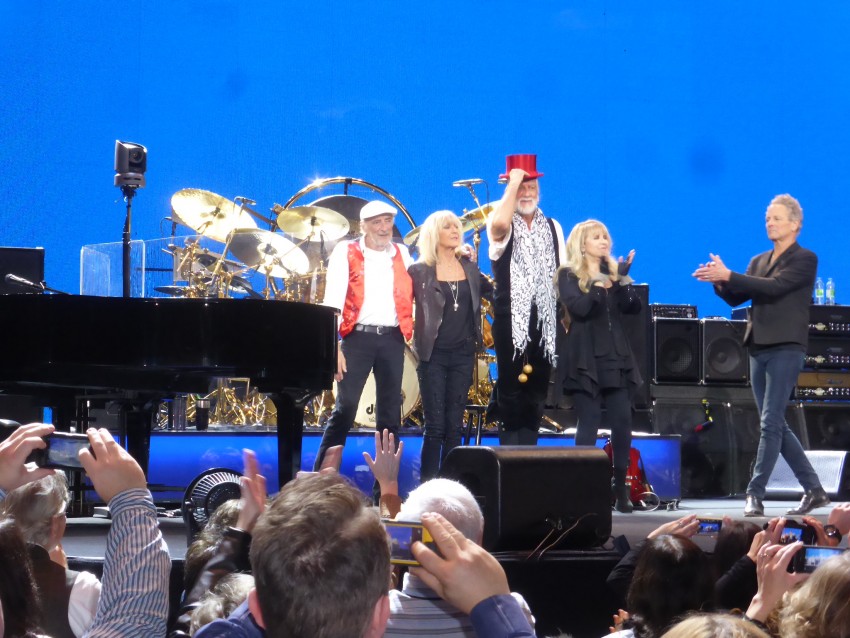 After the second encore and the band had finished playing they came to the stage to take a bow together.  Then after they all waked off, Stevie came back to the microphone to discuss Christine McVie’s return and to thank the crowd for 40 years of support.  When she finished Mick Fleetwood came to the mic to thank the crowd as well.  I have never seen a concert where the band spoke to the crowd to thank them after they had finished performing their encores.  It is one of the classiest things I have ever seen a band do.  Fleetwood Mac, you really impressed me.  That was a truly incredible show you old Songbirds you…

*The album Rumours has a British spelling rather than an American spelling.  Did that come down to a vote decision between the three British members and the two American members… 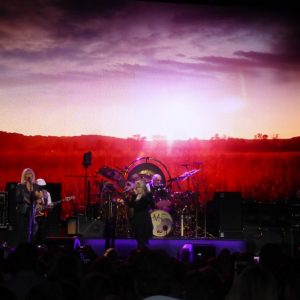 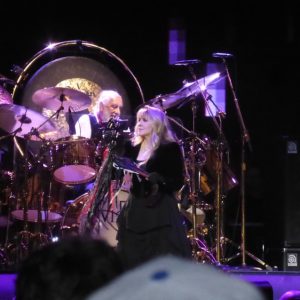 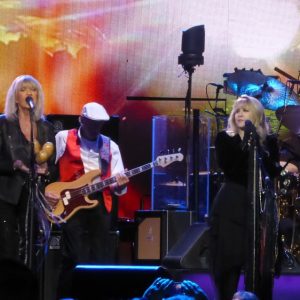 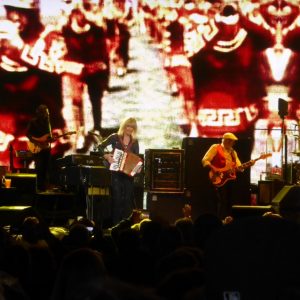 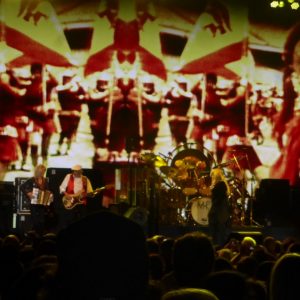 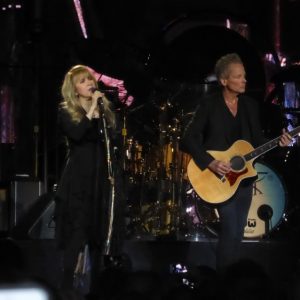 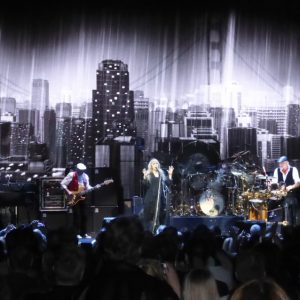 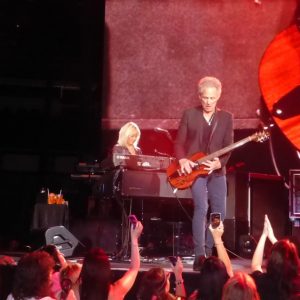 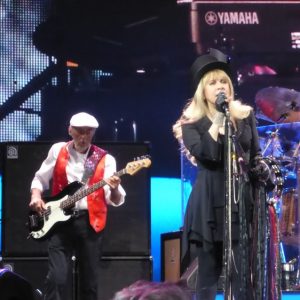 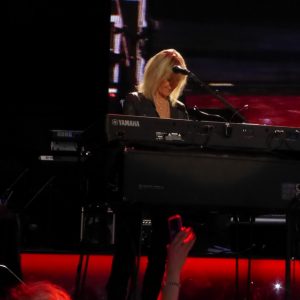 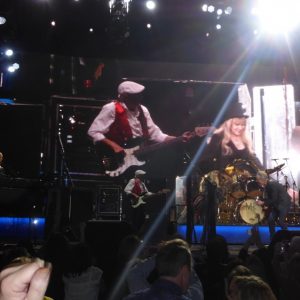 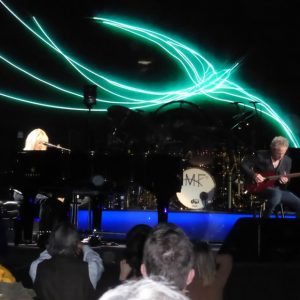