Sometimes I get called ‘Soft’ or get called a ‘Pussy’ because I rarely drink hard liquor.  When I get called a ‘liquor pussy’ and I am never sure if that is an insult or a demand…  It drives me a little bit crazy because most of the people who attempt to taunt me have never come close to partying to the degree that I have over the years since this journey began fresh to the teenage world.  But one day you wake up after you have been doing this for years and years and you make connections….  ‘Ah, every time I drink tequila I can not remember the night from that point on,’ or ‘Every time someone sneaks a shot of whiskey into my life I black out…  Ah….so, that is what has been going on…’  It takes a while to make this connection of learning liquor.  Or maybe it just took me a while to make this connection of learning liquor…

It took a couple of decades to connect those dots…

I hate blacking out.  I hate losing my memory.  I despise it so much.  Spend all of that money to have fun and then not remember it in the morning…  What is the point in that?  If I was a businessman with that logic, I would be even poorer than I presently am.

I had a taste for hard liquor when I was really young.

I loved the taste of whiskey.  Then my oldest brother married when I was 12 years old.  In setting up the Big Beaver hall for the band to play for the wedding, I found myself decorating behind the bar area in the evening before the wedding.  There were rolls of ticket-tokens behind the bar, which would be sold for $1/each that celebrators would purchase the following evening to be exchanged for drinks at the bar.  Being wise to the situation, I borrowed my short arms-length of tickets of every color in preparation for the following evening.

I knew no one was going to sell those tickets to me as a 12-year-old, but I was clever…

At the wedding dance, I was armed with my tickets for liquor.  A couple of neighbours of our family farm were working the bar.  I assumed that they assumed that an adult had given the booze tickets to me, and my assumption was right.  Of course they still did not want to give a 12-year-old alcohol even if it was my brother’s wedding.  Fortunately though, I had a 15-year-old cousin to hang out with that the bartenders did not bat an eye at.  I sneakily drank delicious whiskey that night until a neighbour held me up while I vomited outside and then my mom angrily took me home.

I have not liked the taste of whiskey since….

Perhaps though, my hard liquor disdain is due to my seasoning.  I have never really dedicated time to of learning liquor since.  I went to university in the city for five years of fun, and I never ever had money…ever…during that time.  But, that never stopped me from being out on the town from Tuesday until Sunday.

During my late teens and university days, I always wanted to be a vodka drinker.  I had a rodeo friend who used to come and see me from North Dakota where he was studying, and he used to bring 66oz bottles of cheap American vodka that cost $12 each.  People wore big-leg pants in those days and I would put the vodka into a smaller 12oz bottle that I would sneak into the bar in my sock.

I attributed this all to a lack of practice of learning liquor. 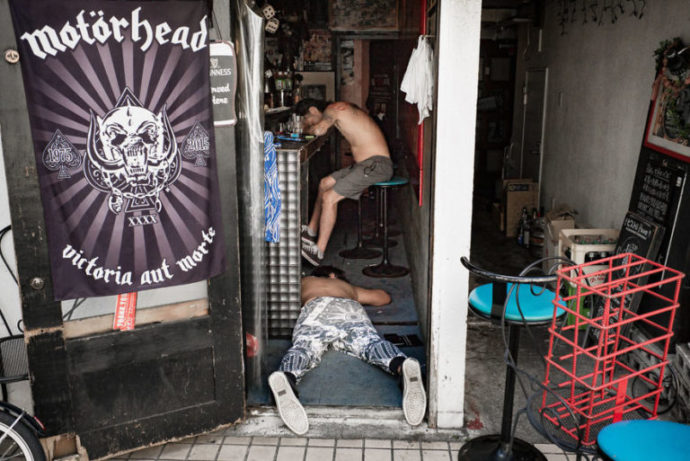 That looks just about how it usually turns out…

In those university days, I was poor and I had it figured out that bars would often cheat you on spirits in a bar.  They would water down their alcohol or they would swindle you on the amount of alcohol that they were supposed to serve.  Plus, spirits were drunk at a faster rate than beer and cost more to buy.  However, bars could not cheat you on booze with bottles of beer.  So, I drank a lot lot lot of beer for those five years with rare aforementioned occasions in between.

I am a beer man.  I am good on it.  I can drink beer until the sun comes up and still be a vital part of the conversation at that time.

Defiantly to my wise beer-brain, I would drink the shot.  That meant for a wake-up the next morning with blotches of the night blacked out.  If I am getting beer drunk, only one shot of liquor on the evening cleans out parts of my memory.  Regret would then turn into slight depression.  As I said in the beginning, perhaps I am a slow learner, but it seems to have taken me two decades of partying to make the entire connection of how this of learning liquor process works for me…

Besides liquor, wine is also a something of problem.  I am getting better with it, but wine makes me very simple.  It does not take much, and wine will do a bad job to me.  I remember having a few glasses of it with dinner at a friend’s house in London.  When I went to go home for the evening, I was pulling apart the living room looking for something…searching and searching.

Everyone in the house was looking at me in my quest.  Someone asked me what I was trying to find.  I said, “My backpack!” in desperation.  Someone pointed to my back.  I was wearing it.  Sometime during my wine-absent minded preparations to go home I had put on my jacket and my backpack, and then immediately went on a search for that latter.  I made a decision that I would be cautious with wine after that moment.  Other consequential attempts of similar escapades since then have continued to confirm that wine is not good for any quick-thought process I might need to provide.

I can drink that black delight with you until you need someone to help you get to a bed….

It has taken me a while to get here, but I have something of an understanding of this body and booze today.

So, have a think about it yourself.  Have fun.  Party.  Go wild.  Lose your inhibitions.  But do so wisely and pay attention to what you are doing.  Life is a great time.  But you need to figure out what you are good at….

Oh, and quit drinking ‘light’ beer!  You are embarrassing your friends who are sitting with you…Pussy.

Here, something to get you in the mood!:

“A local guy walked up to me and said, “Hey Jesus, how are you?”  They like my long hair here.”
— Life in Tanzania
[View All]