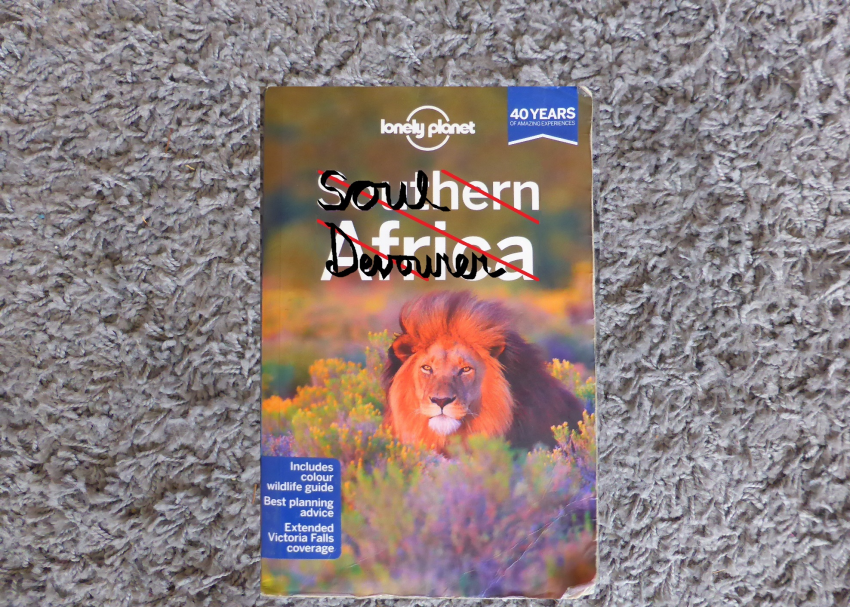 The Lonely Planet guide-books are your primary travel safety net.  That safety net is also a devil that devours travel souls.  The Lonely Plant is the most powerful source in the world for completely sucking and absorbing real life out of anything it features, be it a village, a hostel, a restaurant…or by directing travelers to an ex-pat owned bar in town.

But, Lonely Planet (or a similar guide from one of its competitors, but let’s face it, they are all Lonely Planet) is necessary for your travels.  You need the guide.  We all need the guide.  10.5 years and 90 countries later, I still buy a Lonely Planet for the areas in which I am travelling.  No, not for the hotels.  Certainly not for their entertainment listings.  Rather…I buy one for the maps, for bus and train times, for border crossing information, for the park entrance hours….  The travel guides are unbeatable in providing such knowledge.

You can sometimes find that same information on the internet,
but can you find internet where you are?

With a Lonely Planet guide, it is always right there, just a skanky, culture robbing book away.  But it gives me the urge to vomit when I see someone walking down the street with their face buried in a guide, looking for that top rated hostel in the book where they will diligently check in and then head to the top rated best-value restaurant.  Good job traveler.  Way to get out of your own country to see the over-groomed gringo trail and follow the Lonely Planet treasure map to foreigner-exclusive utopias in strange lands.  Please, enjoy your hamburgers and pizzas in Tanzania.  Culture Schmulture!

The guide books are great because they will get you to an area of a city where you will find accommodation.  And they will give you simplified visa information that you can not readily find on any other website.  The books are too easy to rely on.  As a result, they also rob you of independence and travel creativity.  Why think when someone else has thought for you.

We all catch ourselves following along.
Life hacks…

I recently became aware of the Lonely Planet effect on a six-month loop through eastern and southern Africa when I realized how much guidebooks influence everything.  In Kampala, Uganda, I was trying to figure out how to get to the city of Entebbe, and in careless frustration at a tout trying to cheat me, I left my ‘Africa’ Lonely Planet on the sidewalk when I walked away.  To no surprise, it was not on the sidewalk three minutes later when I came back after I realized my error.  I was panic stricken that I had just lost so much valuable information that would be impossible to find again in any bookstore for a minimum of five countries, not to mention the $40 value of the book that I had just forfeited.

So, I had to make do without a guidebook.  I downloaded Triposo onto my phone, but countries like Zimbabwe are barely listed on the app.

I felt like a trailblazer again, completely
relying on locals for information.

I was no longer burdened with a 900+ page heavy hunk of lumber ‘Africa’ Lonely Planet in my backpack.  However, this also caused me to miss Malawi on my venture south because of misinformation I had scanned through on the internet that the visa to enter the country was $65 as I was beginning to tire of hefty visa fees.  I later found out that the visa for my own passport to enter Malawi was free.  It was accurate information I learned from a friend’s Lonely Planet guide after Malawi was far in my rear-view mirror.

It was my own sloppiness to blame, but I lost out on an entire country because I did not double check other research outlets.

Lonely Planet would have given me that information in about 25 seconds.  In redemption of life typically balancing itself out, a few days later in Zambia I ended up in a riverside village called Siavonga which had been recommended by locals.  I ended up having the time of my life in Siavonga.  Checking back in the Lonely Planet guide long after, the prices listings for lodging in the village had been so book-inflated that I would have never visited had I sourced Lonely Planet information first.

Use those books for their information,
but please do not travel by them.

Cut your own path.  Make your own adventure.  But, check the book to see where you are and what time the gates will close.  Those are things you are going to need to know.

I liken Lonely Planet guides to that girlfriend you have outgrown, and you now think on a far different level than when you met, but you have a really hard time separating from her because she makes perfect sandwiches.  Never will you be able to replace the perfection of those sandwiches, and that is what keeps you hanging on even though you have almost nothing in common anymore…  But please, try the bibibbap, the pad Thai, the jambalaya and the arepas.

Limit your Lonely Planet use.
Maintain your independent soul.

“The Filipinos call the toilet a ‘comfort room.’ That is a perfect testament of their never ending polite ways.”
— Puerto Princesa, Palawan, Philippines
[View All]