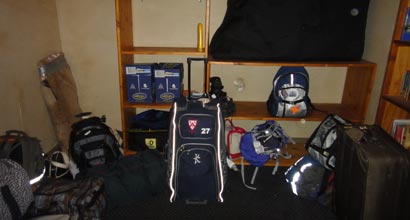 Storage Room Hostel Sex.
My friend Kate has been managing hostels for years.  I asked her for her best story.  She told me this:

“I put my key in the door to open it, and as I did, the girl from the group of three was laying on the table and the guy was standing there having sex with her.  He did not even stop pumping when he saw me.  He just kept on going and as he was, he said to me, “Umm, I’m just looking for, umm, my, umm, lock.”  I said, “Yea…okay, but I need the key back,” and I took it from the table.  I left them and closed the door behind me.  Then I made a huge mistake of telling the staff what was happening in the storage room.  We have security cameras in there, and no one ever pays attention to them, but the entire staff was gathered around it, watching what was going on in that room….”

Now, I am impressed by this, but what I am most impressed by is the guy in the story.  I sort of know what that situation is like.  And you know for sure that he was the one who made the first move.  This is for sure something that happened because a guy’s move.  I have been in situations where crazy things happen at crazy times during the day.  And you can feel chemistry.  And you can feel when someone likes you.  But you have no party around you to use.  There is no alcohol for fuel or an excuse.  It is just the bare bones of humanity and your instincts.  When you are in a circumstance such as this, and you can feel something in the air, but you question your instincts.  Why?… because it is the recipe for terrible embarrassment.  What if you read the energy wrong?  What is you have over-assumed the feeling in the air.  However, I am impressed by this guy.  The fact that he felt it and trusted his instincts enough that he made a ballsy 11-in-the-morning completely-sober move on a girl in the storage-room-of-a-hostel…  He went for it.  Hostel sex.  Wow…  That is the man of the year…

Want more crazy tales?
Try Inside of a Cocaine Lab in Colombia
https://www.bigbeaverdiaries.com/san-agustin-inside-cocaine-drug-lab-drugs-factory/

“For our meal on the plane, there was fish, rice and a bowl with vegetables and kidney beans. How does someone think it is okay to serve beans on a flight? Like really, who okay’ed that? ‘Beans en-route on an airplane. Yea, that is a great idea… Our passengers are going to love the taste...’”
— Somewhere between the Philippines and Taiwan
[View All]