Well, finally it happened, and the day came for me to see Paul McCartney at the o2 Arena in London.  For years, a Paul McCartney concert has been very high on my list of shows that I needed to see.  A former Beatle…, I spent 111 pounds ($172) for my ticket.  The money would not matter in a month, but being at that concert would…

There was no opening act.  To keep us at bay while we took to our seats, there was a deejay playing covers of Beatles songs.  To accompany those songs was a video-picture presentation of McCartney with the Beatles, and McCartney and Wings to the covers of the music he had created.

Well, the lights dimmed, and a he came out on the stage.  There he was….  He opened the show with ‘Hello/Goodbye’.  That was a great start.  He was playing that Hofner bass that I have always known Paul McCartney to play and I think of those basses as ‘Paul McCartney basses’ when I see them.  He played electric guitar.  He played the piano.  He played an acoustic guitar.  He played a mandolin.  He played a ukulele.  When he sang Beatles songs, it made my eyes water.  He was very interactive with the crowd and spoke between nearly every song.  Paul McCartney turned out to be way cooler than I would have ever expected.  I was surprised to learn that he also brought a really great character, and I am sure everyone in the arena enjoyed his personality and banter with the crowd.

The show was emotional.  The show was beautiful.  There was a former Beatle on the stage.  And, Paul McCartney plays the songs you want to hear, and he plays them they way you want to hear them.  He makes sure that every guitar lick is correct and is in the right spot.  His band is flawless.  Every background vocal is perfect.  Every sound effect that you know from the albums is in place.  He is not like other performers who play the songs the way they want to and change lyrics and solos.  There are no mistakes in a Paul McCartney set.  When he sang Beatles songs, his band sang background vocals and played their parts so well that if you closed your eyes, it felt like you were listening to the Beatles.  It was like attending the concert of a Beatles cover band which featured Paul McCartney, who also performed some of his solo work.  It was incredibly awesome.  Being a huge rockstar in your own band is the best you can get, but if you cannot achieve that, what could be better than playing in a Beatles cover band with Paul McCartney?

He came out with a guitar to play ‘Paperback Writer’.  Then after the song, he told us that he had used that particular guitar to perform the song because it was the guitar he had used when the Beatles recorded the song as a single.   Awesome!   He played an acoustic version of ‘Blackbird’, and it was gorgeous.  Then after the song, he showed the crowd how to play it, and asked the crowd for a show of hands of who had learned to play that song in their lives.  A third of the arena put up their hands.  That made him very happy.  He played a song for John.  Then he played a ukulele that George had given him and covered ‘Something’ acoustically on the instrument, until the entire band broke into it half way through and they played the song in full.  A radiant shine emerged collectively from all of the people in the building.  There were tears streaming down my face.  The girl to the right of me was crying.  I looked to the 60-some year old man to my left, and he was wiping tears away from his cheeks.  After the song, I said to him, “It is beautiful isn’t it?” He struggled with an, “It is so great!…”   Paul had 20,000 people all crying together in the allurement of that moment.

Hearing him play ‘I’ve Got a Feeling’ took me to two places in my life: both of them involving my friend Mark from Texas.  The first is of Mark and me sitting in my apartment late one night in South Korea, when I was an English teacher there and I was just learning to play the guitar.  I had an acoustic and so did Mark.  He showed me the chords to ‘I’ve Got a Feeling’, and we played the song together, at about 3am, and Mark sang that song like he wrote it himself, like there was a crowd of 250 people standing in front of us, and he wanted to make sure that none of them missed a note.  He was singing so loud, that I was sure I would get a note in Korean from my landlord the following day and I was going to be in serious trouble.  I remember playing the chords and thinking, ‘Holy, that is loud!’ but my friend was so passionate about singing it at that level that I could not even think to stop him.  Then, about two years later, Mark came to Australia to meet a former girlfriend and I.  We were sitting in our pop-top camper van in a campground in the outback, and Mark was playing my guitar and singing for us.  I asked him to play ‘I’ve Got a Feeling’, because it is my favourite number for him to perform.  I knew the consequences before he had even begun.  And, he played and sang it just as he should have.  And it was incredible.  And it was loud.  And I remember looking at my girlfriend’s face, and she was infatuated by what he was doing, but I knew her perfect German etiquette was bombarding her with guilt about the noise level coming from our van at such a late hour.  Once again, our reputations escaped unscathed….  Music is a beautiful thing for the memories it stirs inside of you, and I felt all of that again while Paul McCartney played ‘I’ve Got a Feeling’ in concert, and I sang as loud as Mark could, without any worry of consequences…

‘Band on the Run’ rocked.  It was so good.  He was back to his traditional McCartney-Bass.  Paul sang John’s ‘A Day in the Life’ for us.  It was great, and I got so caught up in the song that it could have passed for a Paul song.  Fireworks went off to the beats of ‘Live and Let Die’.  Then during ‘Hey Jude’, McCartney segregated the crowd, who had all been singing with him, and made the men sing the song to him for 16 bars and then he asked the women to do the same.  It was awesome.  Then we all sang it together again for him.  He made a medley out of ‘The Word Is Love’ and ‘All You Need is Love’ for us for the first song of his encore.  They ripped out ‘Day Tripper’ for us, and I nearly exploded.  I had dried up on tears long ago by this point, and I stood up and I sang and danced as hard as I possibly could for ‘Day Tripper’ along with the people next to me.  The girl stopped long enough to say, “I cannot believe I am singing and dancing to Beatles songs and a former Beatle is singing and playing them for me!”  Then Paul told us he had a surprise for us, and Ronnie Wood came out with is guitar and the band played ‘Get Back’.  There was a Rolling Stone and a Beatle on the same stage, in front of us.  I did not even know that a Stone and Beatle were allowed in the same building, let alone share the same stage.

Paul came out for his second encore, and played ‘Yesterday.’  Then he asked us if we still wanted to rock.  We screamed, so they busted out ‘Helter Skelter’.  Perfect.  I screamed it as loud as I could at McCartney.  I am not sure if he heard me or not, but I was sure I was singing that song right back at him at the volume he was singing it at me.  I gave my voice box all of the lung-power I had in me and it felt incredibly freaking good to do that with Paul McCartney.  The concert finished with the three song end-medley of the second side of the Abbey Road album, which is my favourite side of my favourite album by my favourite band.  He played ‘Golden Slumbers’ (the girl beside me had told me it was her favourite song as soon as we met, and she was now bawling and singing at the same time), ‘Carry That Weight’, and ‘The End’.  What a way to end the show…  The man walked off the stage gracefully, after having given me one of the best shows that I could have ever wished to see… a show that I had been waiting for a very long time to witness.

That is as close as I will ever get to seeing the Beatles live, and although it was missing three of its members, it was very special and felt very very Beatlesque.  Thank you Paul McCartney.  It was all I could have hoped for in your concert…

Paul McCartney, you are amazing. 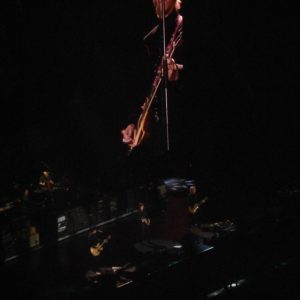 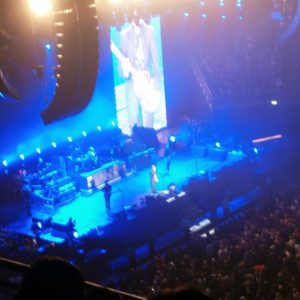 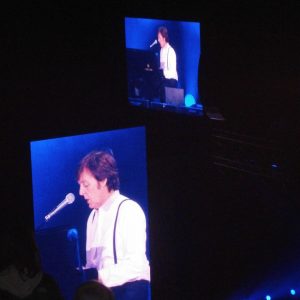 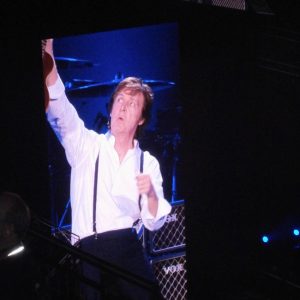 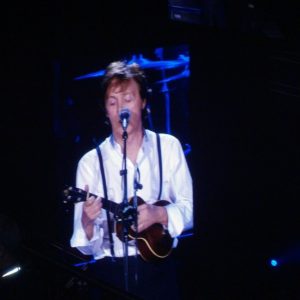 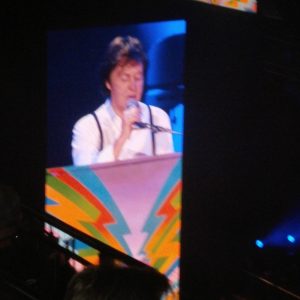 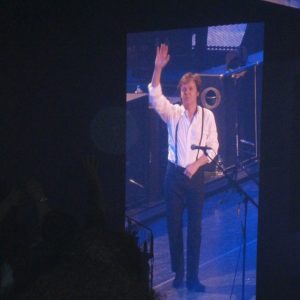 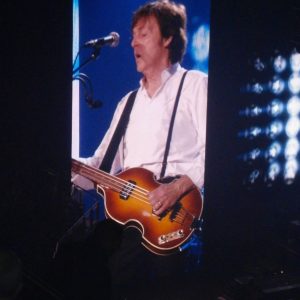 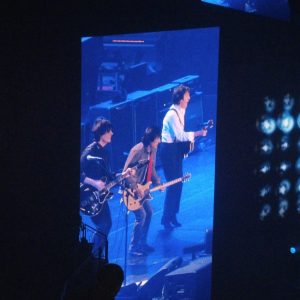 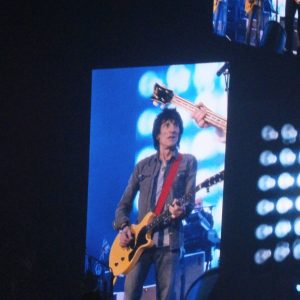 “The Hirwa gorilla group we visited is a relatively new family that began in 2003.  The alpha male of the group, Muninia, was a #4 or a #5 in the Susa group.  Our guide described Muninia as a “good cheater,” who did not want to deal with punishments anymore from the alpha male for sneaking off and having affairs with the apha's gorilla harem, so Muninia decided to leave the family.  When he left the Susa gorilla group, he encountered five other gorilla families where he fought and took one female from each of those groups to begin his own family.  Muninia, now 30, is the 4th biggest gorilla in the jungle.”
— Sliverback Gorillas
[View All]