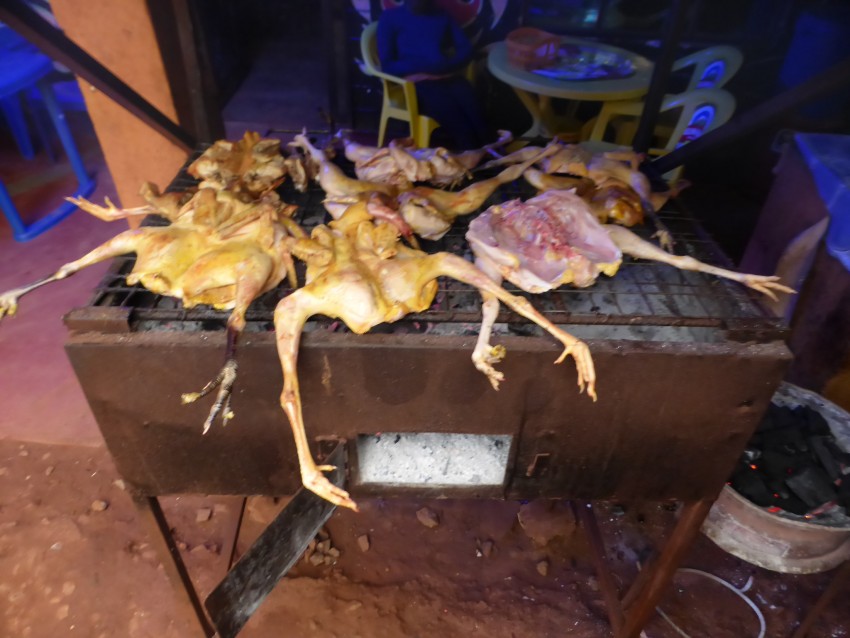 Barbecuing chickens!
David Bowie died today.  It really bothered me.   Lemmy Kilmister two weeks ago, and Bowie today.  It has been a rough week for me musically.  I have Rockstar Sadness.  Both have made my eyes water.  Lemmy, 70, played finished a tour and died just 15 days later from cancer, finding out two days before he died that he had such an illness.  Bowie released his final album just two days ago, on his 69th birthday and cancer took him today.  Musicians and entertainers until the end.  Lemmy lived full blast from start to finish and never let up but was never a junkie.  Bowie was a junkie for some time but did not spend a lifetime powered by speed and Jack Daniel’s like Lemmy.  Of course it is totally circumstantial and incorporates many intangibles, but to me it shows the horrors of heroin.  Maybe it is just different body make-up and Lemmy was made out of really tough stuff…  Bowie was an incredible human and is probably the leader of the world for his contributions as a combination of both music and fashion together.  I spent about three hours listening to Bowie today to drown my Rockstar Sadness.  I read a great quote that said, “The earth is over 4 billion years old, and you were lucky enough to be a part of it as the same time as Bowie.”
For a touching article for a journalist who wrote from her heart about him, click this green line.
[hr]

Karatu: Rockstar Sadness, Feminists, and BBQ Chickens.
Jan 11
I spent the day running around trying to find a safari to join tomorrow.  I love Karatu because people really leave me alone here, but I am surprised that right next to the Serengeti that there are no tour agencies offering safaris here.  So, I was out meeting any and every safari Landrover driver that I could find.  Everyone has to make three phone calls to find out information for me, but then nothing really comes through.  So, I emailed a ton of companies in Arusha and eventually landed a safari that will be three days long for $550.  Or so I hope.  It is late, and the man has not called me back yet…  But it looked promising.

I am not sure why specific countries target specific areas to travel or how that happens.  When I was in South America, the Dutch rules the continent.  There are not a lot of Dutch people on earth, but there were nearly an equal number of Dutch people in South America as there were people from the rest of the world combined.  Here…it is the Danish.  So strange.  There are like 5 million Danes.  In Tanzania, I have met nearly as many Danes as I have everyone else.  Why are the Dutch all over South America?  What are they told and taught?  Why have the Danish chosen Tanzania?  It is bizarre…

I went out for dinner with some foreigners again tonight…three of the four from last night plus four others, three of which were Danish.  We went out for what I was told is the best chicken in the region.  Paulina from France was right!  It did kick a lot of ass.  I really enjoy talking masculine nonsense to feminists.  It is a pleasure to do that.  Feminists are funny and edgy creatures.  They are like that child who got picked on in school who never really gets over it and even though they grow into someone very powerful, they still think that everything is against them and always have to make a stand!  It is great entertainment for me…

Are both of these designer moves saying, “I do not f@#king want one of those anymore!”?

“Paraguay is the girl next door.  She is really cute and sweet and as nice as can be, but there is nothing flashy about her.  She would make a good girlfriend, but you will probably get bored of her before long...”
— Education
[View All]