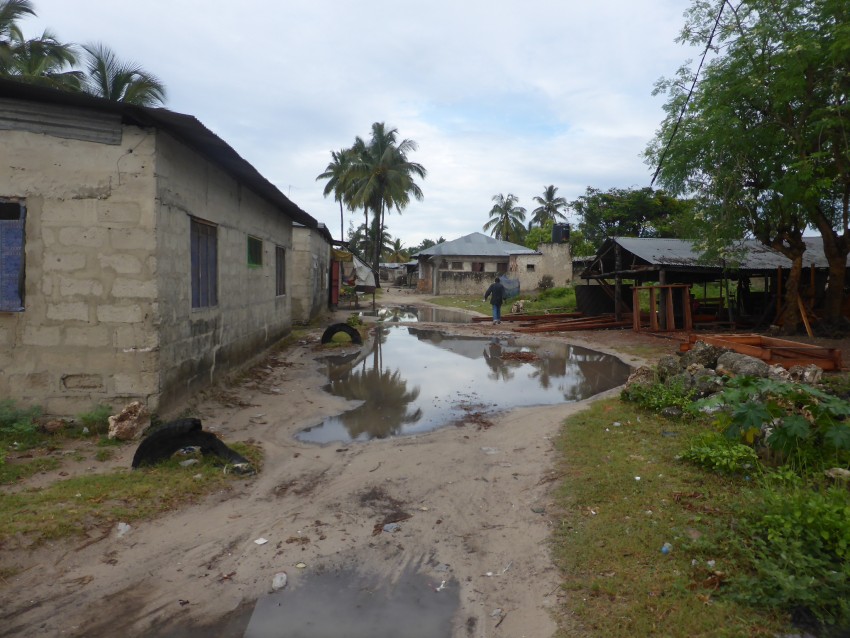 Nungwi Zanzibar: Chalk the White Guy.
Dec 15
It rained here today.  And it rained a lot.  It rained all through the night with crazy thunder that woke me at 07:00 and then it rained all day into the afternoon.  There is a lot of water laying everywhere.  The village is nothing but puddles.  But it is hot, and it is so nice to be here.  It is no problem to handle rain in the heat!

I went for a walk with James, my local friend, who has been here for 8 years.  He asked if he could borrow money from me until tomorrow.  It was just $5 but I flat out turned him down.  $5 will turn into $10, which will turn into $20.  I have experienced this before.  He has been good to me, but there is no way that I can believe that after being here for 8 years that he does not have a better friend than me to borrow money from.  And, if he does not, then I certainly do not want to loan him money.  Perhaps it ends our friendship.

I met up with Fey after his shift finished and we went to play pool in the local bar again.  Fey is a really cool guy and it is nice to hang out with him.  There was no chalk for the cues at the pool table and I asked someone where to find some.  I did not get an answer and then about 5 minutes later chalk arrived.  They Chalk the White Guy here.  Later, one of the guys was laughing when he told me, “We have been asking for chalk for days, and they never have it for us.  Then a foreigner shows up and asks for it and it arrived a few minutes later.  We also need a new cue ball….”

“There is something about driving in the dark in a really cool car on a three-hour road-trip, flying down the black-top behind a purple set of pop-up headlights, with a beautiful blonde in the passenger side who is sipping Peach Smirnoff Ice and dancing in her seat while we listen and sing along to old Tom Petty and ZZ Top, that is really fucking awesome. My life is magnificent voyage right now...”
— How to Drive a Corvette
[View All]