Frankfurt to Zanzibar Tanzania: African Touchdown.
Dec 9
I was lucky on my red-eye flight and I had my seat and the one beside it to myself.  Yeah!  I am flexible enough that I can sleep curled up on two seats and get a real night of rest.  I woke up somewhere over Africa and about 45 minutes before we were to land in Zanzibar we passed Mt. Kilimanjaro in Kenya.  …From the window of my plane as we flew over Mt. Kilimanjaro the view was amazing. The pilot said over the intercom that most of his colleagues had never seen such a cloudless view of the beautiful massive mountain…  That was nice luck.

At 07:15, my African Touchdown at the airport in Zanzibar.  It was a $50 USD fee for a 90 day visa for Tanzania.  It had to be paid for with credit card.  But, it was easy and I was stamped though just after the African Touchdown.

Currency exchange was buying $1 for 2,200 Tanzanian shillings.  I changed a $20 and caught a dola-dola (shared taxi) for 300 shillings ($0.15) for a 7 kilometer journey from the airport to Stone Town.  I found a basic room at the Flamingo Guesthouse for $15, had a three hour nap and went for a walk around the town.  The touts are not too bad and leave you alone when you tell them that you do not want anything.  Everyone calls me ‘Jambo’ everywhere I go.  I assume that is not related to my size, so I guess that is their term for ‘foreigner’?  More on this later.  Also, you hear the term ‘Hakuna Matata’ from locals quite often when you walk around.  No worries.  It makes you sing Disney songs in your head all day though.  Just as soon as you get rid of the earworm, someone else says the term to you and you start singing the song again…

♫ ‘It means no worries,
for the rest of your days.
It’s our problem free,
philosophy…
Hakuna Matata…’♫

The markets are pretty interesting.  I got to see sword-fish, massive octopodium, squids, and there was a young boy running a wire brush taking the scales off a fish.  It is cool here.  At night I went for a walk through the streets close to the hostel.  It is really dark out there and it sounds like a cliché, but it is hard to see some of the locals who are sitting in the dark.  Everyone seems really friendly here though.  It is also amazing to see how much African people like bright colors.  Guys in red shoes or pink headphones.  Many people are barefoot, conducting their activities in the streets.  A crowd of people, mostly men, were gathered around a very small television that was hooked up to a stereo and they were watching some kind of drama show.  Further down the street some guy was dancing by himself to traditional music that was playing.  I had some pineapple, a cucumber, a falafel and a couple of rolls of potatoes for dinner.  In total it cost me $0.65 to eat…

I am here! And I am excited about this African Touchdown.  I am so happy to be on this continent (well on an island next to the continent)!

*’Jambo’ is Swahili for ‘hello.’  That makes a lot of sense! 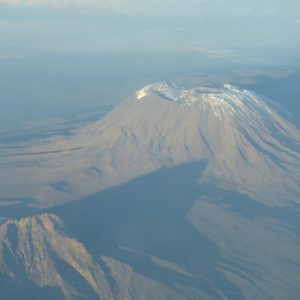 Mt. Kilimanjaro, as viewed from out airplane passing above on a cloudless day. 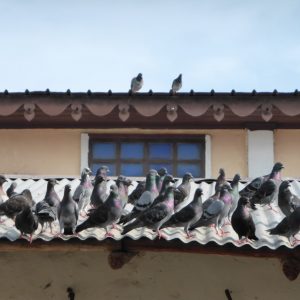 Pigeons in Zanzibar is actually quite pretty. 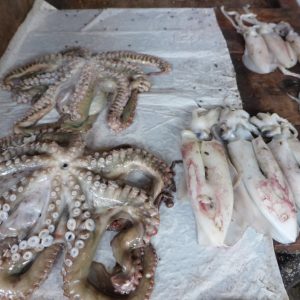 Octopi and squid. Octopi are a very strange creatures. 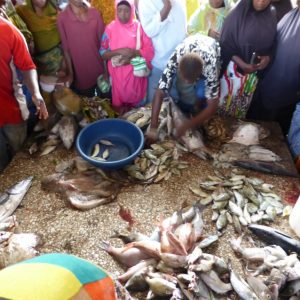 An auction at the fish market.

“We were pulled over for forgetting to turn our headlights on. Fatty was hoping the cop would ask him if he had anything to drink and give him the breathalyzer because he was going to respond with, “I have not had a drink in years, but you can blow me if you want...” The policeman did not ask, but Fatty probably would have gotten a ticket for the lights had he been able to use that line. The response would have been worth it.”
— Fatty
[View All]