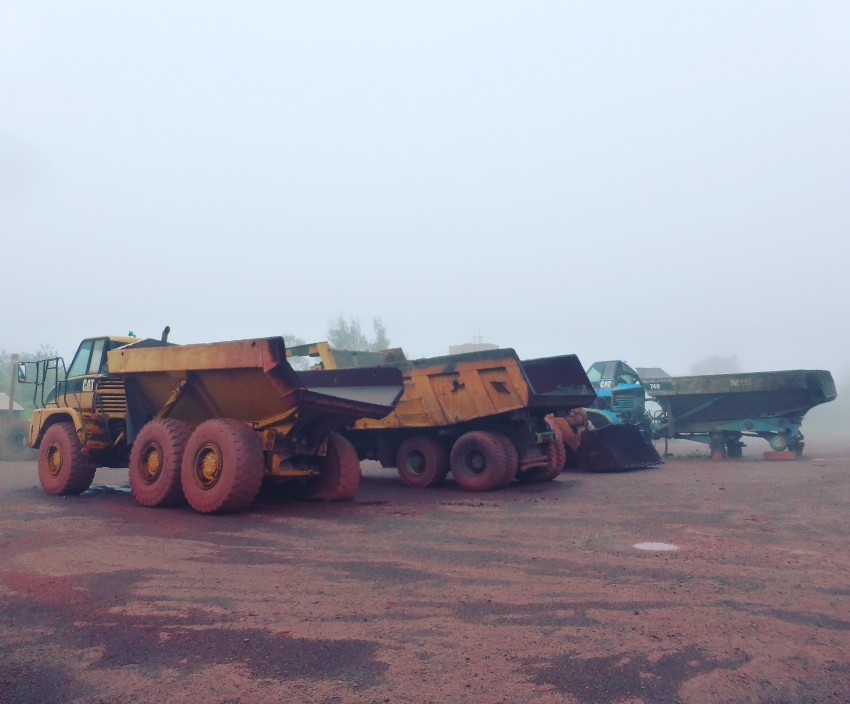 March 22
Here, try this.  Here is a handy-dandy set of helper words if you are about to arrive in Swaziland!

Some siSwati Phrases:
Hello – Sawubona
Thank you – Ngiyabonga (I), Siyabonga (we)
Goodbye – Hamba kahle (go well)
Goodbye – Sala kahle (stay well)
How are you ? – Kunjanl?
I am well — Ngikhona
How much? — Malini?
Yes – Yebo
No – Cha

It was misting all day, but I really wanted to get out of the hostel and see some of Swaziland, so I made a decision to catch two different minivan taxis to a town called Ngwenya where the oldest known iron ore mine in the world exists.  People have been mining from the mountain for 43,000 years.  That is not a typo.

Oh wait, I have since found this in a Swaziland Tourism book…

THE OLDEST MINE IN THE WORLD
More than 27,000 years* have passed since ancient man chipped away at the side of the Ngwenya Mountain in the north-west section of the area that would eventually become known as Swaziland.

Ngwenya is siSwati for crocodile and the mountain is so-named because of its resemblance to a huge basking reptile.

These bushmen extracted pieces of iron ore (hematite), from which they extracted red ochre to smear on objects or people to signify fertility, purity and sanctity. Specularite, a glistening black oxide or iron, was also among the diggings and was used to ward off evil or as a cosmetic.

The primitive miners confined their work to the mountain’s summit for fear of the great horned snake, the god of the underworld, who lived at its heart. Thousands of artifacts have been excavated from the site (today known as the Lion’s Cavern) over recent years and radio-carbon testing of charcoal nodules has established that this is indeed the earliest known mine in the world.

*So, there is a discrepancy of what the Swazi tourism book says, and what everyone and everything else says…unless that is that the book I was looking at was 16,000 years old…  If that is the case I should be getting it to a museum.

I was dropped off on the side of the road in the mist where my taxi-driver pointed up a hill, at a man coming down and said, “Walk way of man.”  The taxi driver smiled a warm smile and then he sped off.  I aimed for the direction where he had pointed. 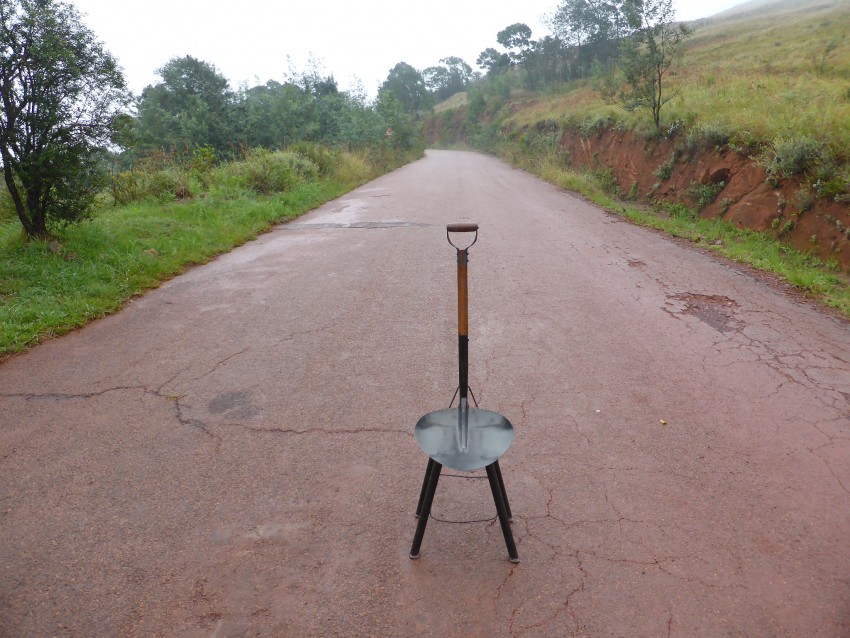 Yeah, that is a cool chair!

A worn foot path up a green hill along a two meter fence that had “ELECTRIC” signs mounted to it in several places seemed like where I was supposed to be.  The path was so close to the fence that I was constantly aware of it in fear that my arm would bump against the wires and I would either get a shock or fry.  I wanted neither, so I was careful in my stride.

I passed a water treatment plant and eventually arrived at a shack where I met Mpendulo, the most interesting man I have encountered in a couple of weeks.

Mpendulo is a security guard and a game-park ranger.  He sits in his small shack all day hoping for visitors.  It was misting so hard that I hung out in the shack with Mpendulo for about an hour before I was ready to venture out into the weather to see the mine.  It cost 28 Swahili rand ($1.83) to get into the conservation area. 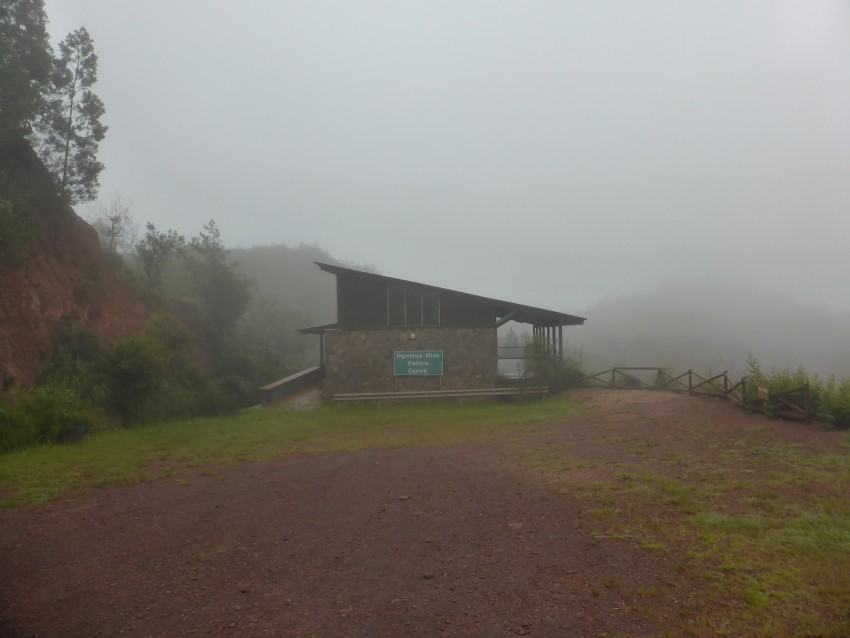 Ngwenya Iron Ore Mine museum. I am not sure when the last person before me was there…

Mpendulo joined me for the walk as my guide and we had a good chat on the way.  He told me that Swaziland is safe in comparison to South Africa.  There are 1.29 million people in this country and when people hear glass smash here, they naturally think of a cat up to some mischief or some kind of animal first, whereas in South Africa people know that a break-in is happening.  He is right and there is none of that uneasiness here that one feels in South Africa (or perhaps it is all in my head and I have just been brainwashed about South Africa from all of the horror stories).

According to my new friend, people do not steal so much in Swaziland.  He said that if you forget something in the park, chances are that you will find it again.  But, if it is missing, it is more likely that the baboons or the monkeys got it.  Forestry, tourism, sugar cane and marijuana make enough money in the country that people are not as hard.  Twice since my arrival I have been told, “That’s our gold!,” when people refer to sugar cane or marijuana. 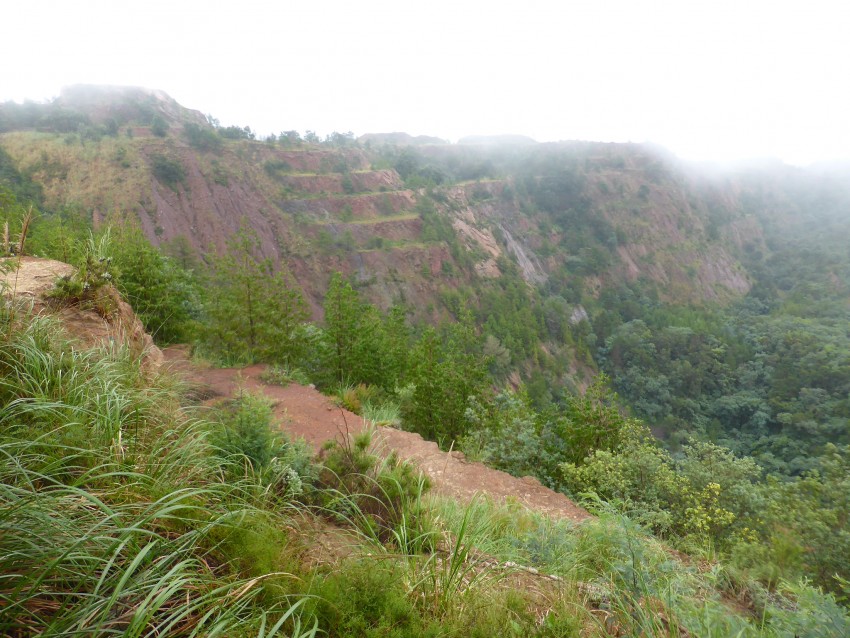 One of the three mines.

The Ngwenya means “crocodile” because that mountain was once in the shape of a basking crocodile before excessive mining to remove the iron ore took place in the 1950s.

There have been four phases of the mining…

– Phase 1: Began 43,000 years ago when the bushman discovered hematite.  They mixed the hematite with eland blood that they then used for paintings.

– Phase 2: Started around 450 A.D. by the Bantu people and lasted until the 1950s.  The Bantu people were mining the iron ore that they put into a furnace to smelt.  They would smelt the iron ore for three days to melt it down and roll the pure iron into balls that they could easily work with.  Among other things, they would make spear heads or battle ax heads from the iron.

– Phase 3: A company called Anglo-American recognized the potential of the iron ore in the mountain that they excavated 28 million tons starting in 1964.  It was quality ore that was graded 60% and up.  Anything less than 60% was left behind in 50 million tons of tailing mounds.  The iron ore was loaded onto Norwegian built ships designed specifically for hauling it and the ore was taken away to Japan where much of it was made into automobiles.  In 1977, with two years worth of the ore stockpiles built up, mining in Ngwenya ceased.

– Phase 4: In 2011, an Indian company called Salgaocar moved in to collect the iron ore from the 50 million tons that Anglo-American had cast aside as waste.  Salgaocar remained in the mine until 2014 when the price of iron fell too low to be worthy of extracting.

Today at the mine, it seems as if Salgaocar collected their final paychecks and just walked off of the hill.  There are track-hoes, Caterpillar rock trucks, graders, screeners, cranes and pumps everywhere.  Millions of dollars of equipment sits abandoned up the mountain on the edge of the mine.  It is a little eerie up there the way it was just deserted. 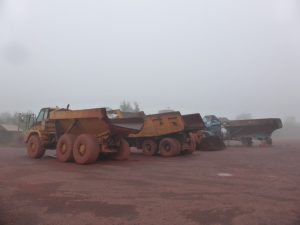 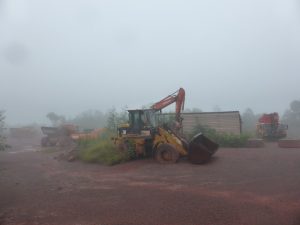 Millions of dollars, left behind. That crane on the right side is worth at least $1 million alone.

There are three giant mines/holes in the earth from mass excavation that has taken place in only 16 years accumulated.

The white man scars EVERYTHING that he touches, everywhere… 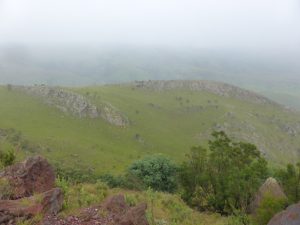 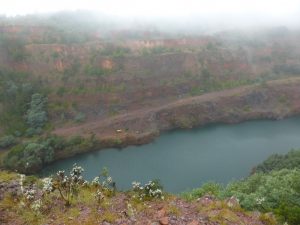 Mpendulo walked me back down the mountain to catch a minivan to take me back to Mbabane (pronounced mba-baa-nee), and from there I caught another to my guesthouse in the Ezulwini Valley.  I stopped at the supermarket for groceries and beer and headed back to the hostel where I drank local versions of the tasty beverage into the night while telling crazy stories to a South African couple. 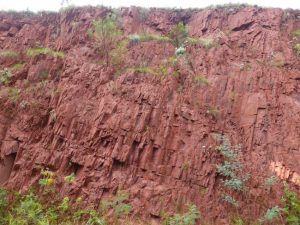 The earth on the way to the Ngwenya Iron Ore Mine. 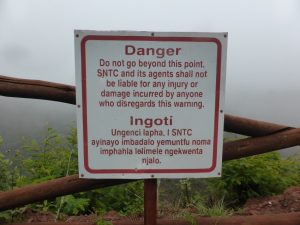 Well, you have been warned. This is not North America. You can not sue if you are stupid. 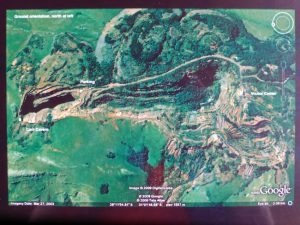 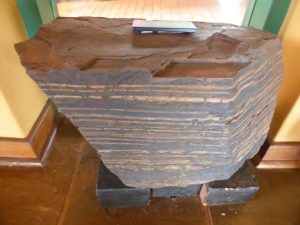 If you think rocks are heavy, you should try iron ore. 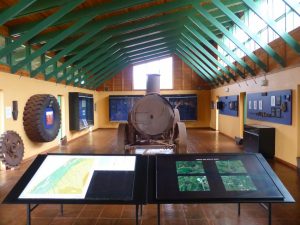 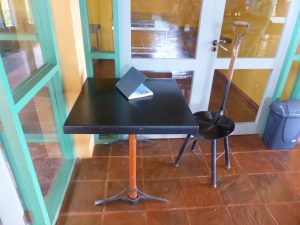 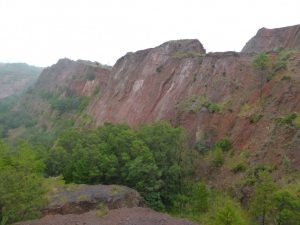 Man leaves a mess behind. 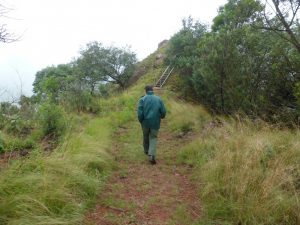 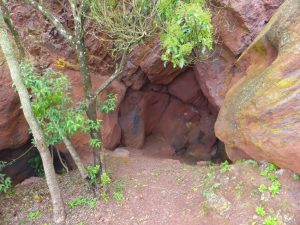 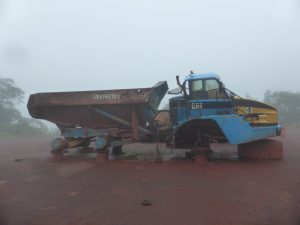 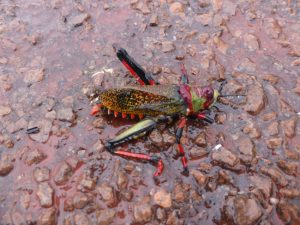 Colorful locust on the road who met a truck.

“At work I was talking my friend Gladstone who is 55 and I said to him, “Hey, I am in my 30's and when I drink water it does not seem to bother to stop at my stomach. It runs right through me and seems to go directly to my bladder. As soon as I drink water I have to pee. Does this happen with you and is this what happens with age?” Gladstone said, “I had a friend like that once. He’s dead now.” I looked at Gladstone and repeated, “Dead?” Well, Gladstone almost blew apart with laughter. He had not meant it like that and the friend of his had drown, but he sure laughed after he realized how he had said what he had said. It was hysterical!”
— Gladstone
[View All]