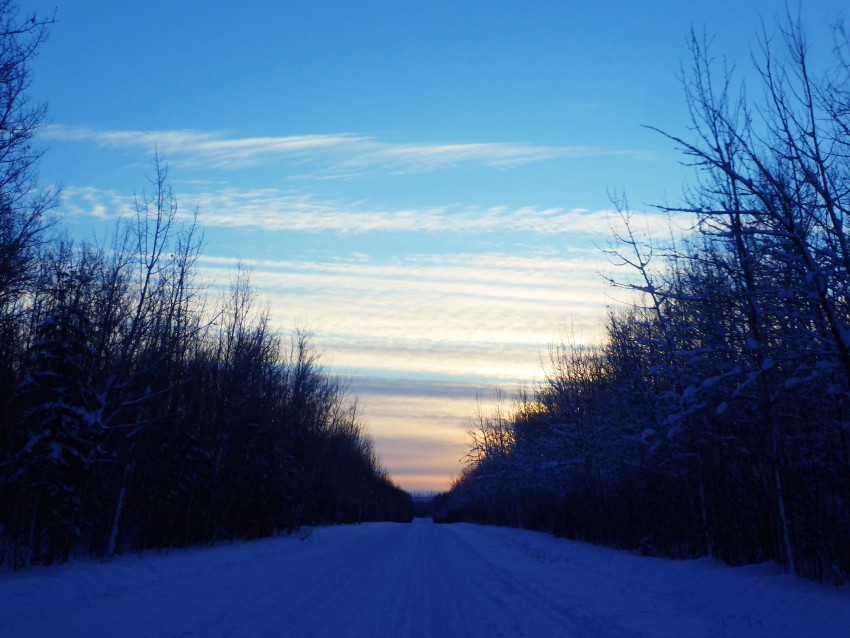 Now, that is a pretty sunset on a pretty drive!

At 13:00, after some convincing from everyone in the community, Julie and I left Barbara and Robert Grandjambe’s house, gassed up the car up in Fort Chipewayn for $1.60/liter, and drove north. It would be a 3.5 hour trip from Fort Chipewyan, Alberta to Fort Smith, Northwest Territories.

Check out that road-sign! You know you are not home anymore when you see signs on an ice-road warning you of buffalo!

Neither Julie nor I had been to any of the Canadian Territories before, and we could not pass up the opportunity when it was such a short drive away.

The first 50km from Fort Chipewayn to Fort Smith is driven on a small and narrow ice-road. The trail is beautiful with trees making something of an archway above the path. It is 50km to Moose Island and then the next 180km of ice-road is essentially a highway that we traveled 120km/h on.

Now, that is a pretty sunset on a pretty drive!

The ice-road was actually better than the highway that leads north of Fort McMurray because there were no pot-holes on the ice-road-smooth journey. A quick singing-along drive-shortening trip later, we were there!

Julie and I stopped to take a photo of the sign. Moments later, we arrived in Fort Smith.

Fort Smith is a much larger center than Fort Chipewayn, and being that it is connected to permanent highways west means that is it not isolated and prices are a little more reasonable. Julie and I stopped at the bar in town to have a beer and find information about where to stay as bartenders always know things. It was only $4.50 for a beer at happy hour! …In the Northwest Territories… Amazing! That is a better beer price than most bigger centers in Alberta! Heck, that is a better beer price than most places in Canada!

However, the sleeping was quite dear and the cheapest hotel we could find in town was attached to the bar…for $180/night. That particular room at the Pelican Rapids Inn came with toilet accompanied by a broken flush-handle, heat that was stuck on ‘full blast’ and doorstops made from hockey pucks. Julie and I tested the bed to see if it was good for sex and it turned out to be just right, so all was not lost in the price!

At 22:00 it was clear that Julie and I needed a party-kick-start, so we had a shot of the moonshine I brought with us and then we ventured out of the hotel.

We came across a skating rink that we darted into for heat refuge. A temperature of -31° Celsius is face-nipping misery. And wouldn’t you know it, there was a hockey-tournament party taking place inside of the rink! Perfect. So, Julie and I made ourselves welcome, bought some drinks and had a free meal from the pot-luck dinner that was still set up. Thanks…whoever. We made friends inside and we were given shots. A slight food fight broke out between some girls and then everyone headed back to the bar as the party in the rink wrapped up.

Look at the languages on that stop-sign. How cool!

Fort Smith is not an indigenous community like Fort Chipewyan. Fort Smith is mixed and that took some of the shine away for Julie and I. We really only wanted to hang out with indigenous locals. Fort Smith is a college town and it did not have the charm of the elders that Fort Chipewayn had offered the night before. Instead, it had drunk college students. I know all about them. I was one just like them for five years and had my technique down pretty well.

Julie happened to be the prettiest girl in the bar, so that got us a lot of attention. Well, it got her a lot of attention and I got secondary attention because we were the outlanders there together. She told me that I get a little territorial when other guys grab her ass. I had not noticed that about myself before…

…we were actually undercover agents…

Flora seemed glad that we were in town…

When the bar closed, Julie and I figured that we did not need to find an all-night house-party because of a seven-hour drive back to Fort McMurray in the morning. So, we went to our room for a get-to-know-you-better session. That was probably a lot more fun than any old house-party could have ever been anyhow, drive or no-drive back in the morning!

“I spent the rest of the day on our Galapagos Island drinking beer with a couple of older ladies, one of whom was Sheelagh from England, aged 63.  When the store that we wanted to buy beer from was on a siesta that seemed to be taking too long, Sheelagh went to the back door of the hotel and found herself in the kitchen.  Against the wall on the right hand side of the kitchen was a small room where she found a small chest with two keys inside.  She took the single key from the chest, went around and tried it in the front door of the convenience store door which it unlocked.  Once inside of the shop she took three beer from the fridge, locked the shop, put the keys back, and returned to where we were sitting with the booze!  A crafty 63 year old woman!  When the shop owner came along half way through our beer we paid her the required cash and Sheelagh explained what she had done.  I was super impressed at her 63 year old dexterity and smooth skills.”
— Education
[View All]