Drunk on a Plane in China 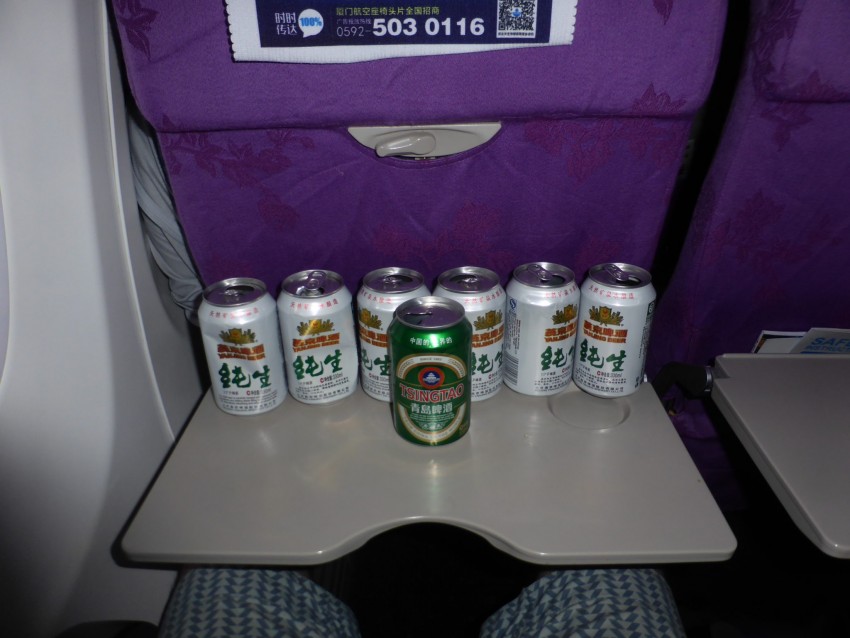 I was up at 09:00 to get cracking at our plans. Markus and I booked plane tickets for Manila, Philippines that leaves today. But first, there would be a 15 hour stopover in Quanzhau.  We think could be the first city we visited in China, but we are not sure. Markus called it a ‘Blank Flight.’

We went for a walk around Beijing but we were bored because we had a limited amount of time, so Markus and I went back to the hostel, killed an hour, spent an hour and a half on the metro as well as the airport express train and finally ended up at PEK.

Once we checked in for our flights and got though security check, we still had time to kill, so we decided to drink beer. There was vending machine that sold Tsingtao beer for ¥6 ($0.88), so that really made things fun. Our plane was delayed, and by the time we were being allowed on it, we realized that it would be smart to bring illegal contraband beer with us in my small backpack onto the plane. I rad to rush upstairs in the airport to get them, while Markus waited at the gate. Everyone on the flight was already gone by the time I got back to you gate, so Markus was a little stressed by the time I re-appeared. We got on our flight.

Our plane was not even close to full, so we got entire rows of seats to ourselves. The flight was delayed more once we were seated on it, so they fed us our meals on the runway. China is great because they feed you on every single flight but they are always delayed, so it is kind of a mixed bag. We have never had a flight leave on time in this country.

Fortunately, the problem with the delayed flight worked in our favour, as the stewardesses and stewart were glad to keep us happy by supplying us with free beer. We finished our first beer before we even got on the runway. We asked for more beer but we were about to take off, so they held out taste-buds back. As soon as the plane got into the air and the seat-belt sign came off, a stewart came and handed Markus and I two beer without saying anything to us. His goal seemed to be to help us get drunk on a plane. We did not let up.

Drinking beer, laughing with your buddy and not giving a shit that your flight has been delayed for a couple of hours is way better than being sober and bitchy about late flights.

We felt like naughty schoolchildren was we sneakily drank our illegal contraband beer in between rounds supplied by the staff.

Markus and I were given more beer and when we asked for yet another round we were told that were are supposed to be limited to two beer.  We were beyond that already, but that they will take care of us. We made friends with the lead stewardess. She said she would give us two more beer. After the first I went to the toilet I and asked her for the second. She questioned, “Are you okay?” checking to see how drunk on a plane we were getting.  Dang right we were okay. Markus and I can consume a lot of beer…assumingly more than most Asians.

The lead stewardess sorted out another round for us.

All in all, Markus and I drank seven beer each on the two hour flight to get drunk on a plane.

Markus told me, “If they would just serve the beer as cold as the bananas, that’d be alright.”

He was right. I realized that ‘Cold Bananas and Warm Beer’ is a pretty good name for an album if you are looking for one.  You are welcome!

When we landed, Markus and I still had no idea where we were in for certain.

We walked out of the airport and showed a map to three people. None of the three could read it to tell us where we were. They were saying, “No English” to us. The thing was that we did not need them to speak English. They just had to point at an area of the map of their country, but we could not translate that across. Finally we learned that we were in Quanzhou. Weird.

There are like three million cities in China with three million people, and ironically, Markus and I have ended up in the same city we rode a bus to on our first night once we initially arrived in China on a ferry from Taiwan. We have accidentally made a full circle! Cheers to linking life!

You know you have found a classy hotel when they are business cards for hookers on the floor in your hotel room.

Through GoogleTranslate, some guys helped to get us a cab for an agreed ¥70 ($10.40) towards a hostel we had found online.  However, the city of Quanzhou turned out to be right outside of the airport doors. So, we told the taxi to just take us to a cheap hotel instead where he dropped us off and we made friends with the guy at reception.

We told Reception Man that we wanted to party. He told us to take our bags to our room and then took us to some really bizarre Karaoke lounge supermarket building. The place was strange and inside we were were expected to buy 48 beer.  As well, we could have two girls to come and sing songs with us for ¥400 each. If we did not buy singing girls it would have been Markus and I alone singing songs to each other. We decided that neither the option was our niche... Drunk on a plane together? Yes. Singing karaoke songs to just each other? No.

The place was really nice, with crushed velvet and leather lounging couches and an internal liquor supermarket. But, the whole scene and situation was bizarre.

A karaoke supermarket building… Where are we and what in the heck is this?

Our receptionist friend took us back to the hotel and we sat on cases of soda at a table and got smashed with him and his six friends who were eating. Another guy arrived on a crotch rocket motorcycle who took Markus for a ride. Before Markus took off he told me, “If I do not make it back, tell my mom I love her!” He was back about 10 minutes later smiling. He said it was a fast ride through the city.

Markus ended up showing magic coin tricks to the Chinese and then he ended up playing a Scottish coin toss game, called Chippie, with them that he grew up playing at home when he was in school. They would throw a coin from a distance and the closest to the wall would win. They were betting ¥10 a game and having a blast. At around 04:00 security in the hotel told us that we had to go to bed. I was well on my way there mentally anyhow. We got to sleep around 05:00 and the sun was very high.

Things sure got out of hand and fun in Quanzaou, China, unexpectedly. That was a blast.

Whooee, if you can find a way to embezzle seven beer on a two hour flight across China and end up drunk on a plane, you are in store for a strange and crazy late night…

“Mike and I watched a show called ‘Cosmos - A Personal Voyage ’ about the universe.  Science has observed millions of galaxies as far as 13 billion light years away.  That is as far as can be seen at this point because this galaxy was formed 13 billion years ago.  Anything further than 13 billion light years away is undiscovered to us because the light from any distance beyond that has not had enough time to reach us yet.”
— Education
[View All]