It was quite a day as a farmer.  I walked over the hills through the pasture with a .22 rifle in search of gophers to hunt, but there are none around.  I walked for a mile and a half through the pasture to the field where my brother and my father are working and I never shot a bullet.  I collected a cow-skull though, so the walk was not futile.

My brother Matt and I pulled apart the back end of his combine.  I do not miss that kind of work at all.  Lifting, pulling, turning wrenches and smashing your fingers into metal.  But, it was really cool to just hang out with my brother and work together on a project.  Harvest time is cool for that…

At 9pm I headed to Coronach.  My best friend Travis is home as well, so I met with him at Coronach bar.  I showed up wearing plaid bell bottom 1970’s pants, my cowboy boots with dice and flames on them, and a shiny red shirt with a 19cm collar that I had made in Vietnam 8 years ago.  I looked ridiculous.  Travis shook his head when he seen me.  I told him that if I was going to be getting drunk with my oldest best friends, I had better look like I am ready to party.  Some older woman sure was interested in me.  I just wanted her to go away so that I could hang out with Travis.

We had a beer and went to meet Steve at his house where Mike was already waiting for us.  Mike was wearing a full suit.  I had been taunting him to wear his ridiculous green shirt to match my red one that he had made at the same time, and he showed up in a suit instead.  Just as the four of us went to have a beer together, Jason showed up.  I had left his a long winded message on his message manager earlier thinking it was a total shot in the dark, but it worked and he showed up.  Awesome.  An Old Boys Club party.

Mike had brought over a bottle of wine that was made by Maynard James Keenan of Tool that Mike had been saving since 2006.  Tonight’s Old Boys Club was a special enough occasion.  We headed down to Steve’s bar in his basement to hang out.  I sat behind the bar and had some of my closest friends in the world all sitting in front of me.  It was so awesome.  I felt like I was in the center of a stage, and around me were some of the most important people in my life.  There was so much awesome around me and we just told old stories of our young chaos for hours.

The night went fast.  I started pouring shots from Steve’s bar and making everyone drink them.  We did two and then Travis told me that I need to ease up because he knows how bad hard liquor is for me.  It is nice to have someone around who knows me so well and is not afraid to speak his mind about any situation of mine.  It is really awesome to hang out with him again…

Everyone just kind of let loose.  Travis and I were for sure going to party all night.  Steve who did not want to drink was on board as soon as we got to his house for Old Boys Club.  Party Mike was out and Jason who had to be up at 7:30am was ready to drink shots all night.  It is just so cool.  Our friend Craig showed up and we just had a blast all night.

At about 3am, somehow we decided that we were going to have a footrace around the block.  I was sure that I could beat everyone as I was sure I was in better shape than everyone else in Old Boys Club.  I knew Travis would still be fast in a short distance race so I thought I could out endure him and we decided to make an entire circle around the block, drunk.  I stripped down to my Sponge-Bob boxer shorts and a pair of running shoes I got from Steve and we crawled through a hole in his fence in his back yard to the road.  The goal was to get back into Steve’s yard.  A drunk guy down the street seen us and counted us down for the race.  I took off like a shot and was very far in the lead for ¾ of the block circle.  Then I heard steps behind me.  It was Travis.  He still had wind.  He passed me.  I could not believe it, he had hung on.  I sort of gave up when he passed me.  Then I saw that he was running but not very fast.  I walked for about 15 seconds and then pushed myself as hard as I could to get to Steve’s before him, but he got too far ahead.  He finished before me but he could not find the hole in the fence so I was hurrying to try to beat him on the technicality of getting through the fence first.  He found it before I could get there.  He won.  I was disappointed…  Mike and Steve received a DNF.  They never made it.

Travis and I went to the deck and laid down.  We were both so tired.  I was so exhausted that I thought I was going to vomit.  It was terrible.  We both just laid there for 10 minutes, trying to catch our breaths in startled lungs.  Drunk running is a lot of work.

Everyone was so tired that when we went into the house, everyone just went to bed.  Old Boys Club was finished.  I would have liked to have partied more, but everyone dispersed.  Drunk footraces kill parties, and confidences…

“I’m a full grown man!  And my parents still talk to me at the table like I am a kid.  So, I hid my can of chewing tobacco in my sock and I left.” – Travis on being home again 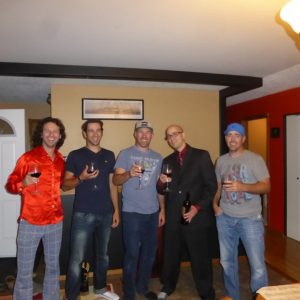 A crew as good as it gets. 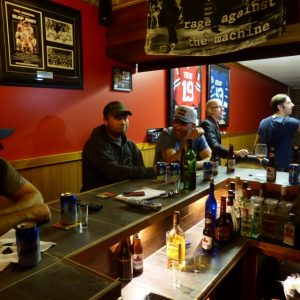 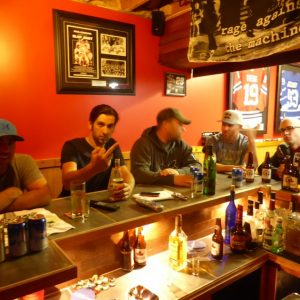 My view from the bar. 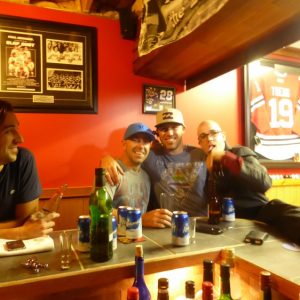 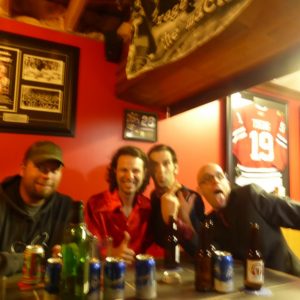 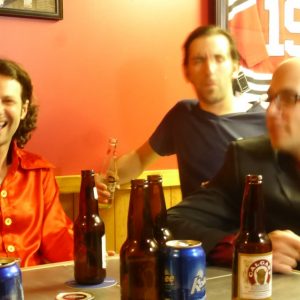 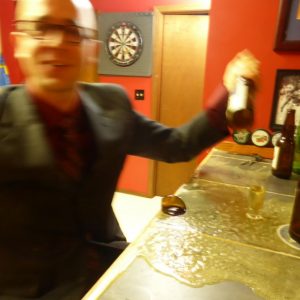 This is what happens when you try to open a bottle of beer with a dart…somehow. 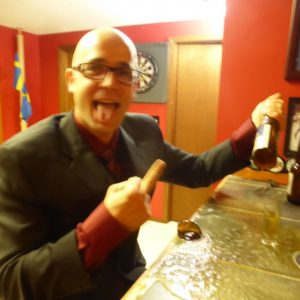 No one really understood how this happened. Good to have old Mike around.